Finally Taking the Time to Swim

All through July I would walk past good looking swimming holes and stare at them longingly while simultaneously listing off all the reasons why it wouldn’t be a good idea to stop.  I needed to stay on track to get to camp, if I swim it might increase my risk of chafing, my feet are dry and I don’t want to end up with wet socks.  Blah, blah, blah.  But my body craved being submerged in cool mountain water.  I needed to douse the fire built up in my system.

The whole day of climbing up Stratton Mountain in Vermont, I knew my plan was to camp at the Stratton Pond tentsite and I hoped Stratton Pond was really a good pond to go swimming.  I was not disappointed.  Two ladies were lounging at water’s edge and I asked them if it was OK to swim there.  “Oh yes, we just did.  You’ll love it.” 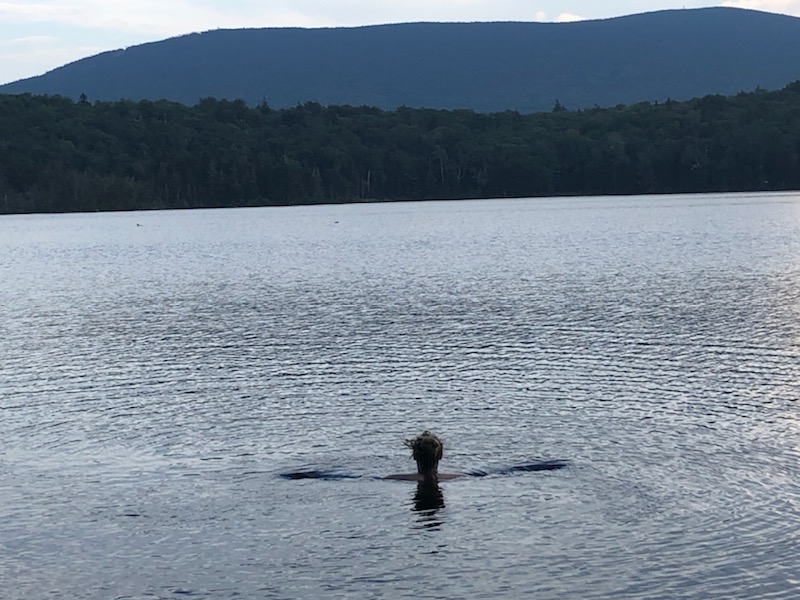 Submerged in Stratton Pond, taking in the enormity of the mountain I climbed that day.

The water was delightfully cold, and I took my time scraping all the caked-up dirt and grime off my chipped and sensitive toenails.  The ladies taught me about a bird called a loon, and pointed out two of them.  The loons were floating peacefully in the distance.  I had never known such a thing as a loon existed, and the two women were excited to know that I might hear a loon sing for the first time.  “It’s haunting and beautiful,” one of the women promised me.

After cooling my body in the water, I put on a pair of pajama pants my sister had left with me, and my fleece jacket, and I watched the sunset at the water’s edge while I had ramen and mashed potatoes for dinner.  A storm rolled in just before it got dark and I zipped myself up in Snuggle Palace and had the coziest night’s sleep I had ever had.  The hard rain pecking on the surface of my tarp was so soothing.  All the heat was finally gone from my body and it felt good to curl up in my soft clothes and warm sleeping bag.  And in the middle of the night, I did hear the loon.  It was such an eerie, woeful sound.  I grinned to myself, thankful for the sheer beauty.

I was eager to get up and get going in the morning because I had a reservation at the Green Mountain Hostel in Manchester Center, Vermont.  I had about an 11-mile walk to the road where I would hitch into town, and I hoped to get there before noon.  Everything was wet, drippy, humid and muddy from the storm the night before.  I was really experiencing Vermud for the first time, and was as dirty and soaking wet as I had ever been by the time I reached the road just after noon. 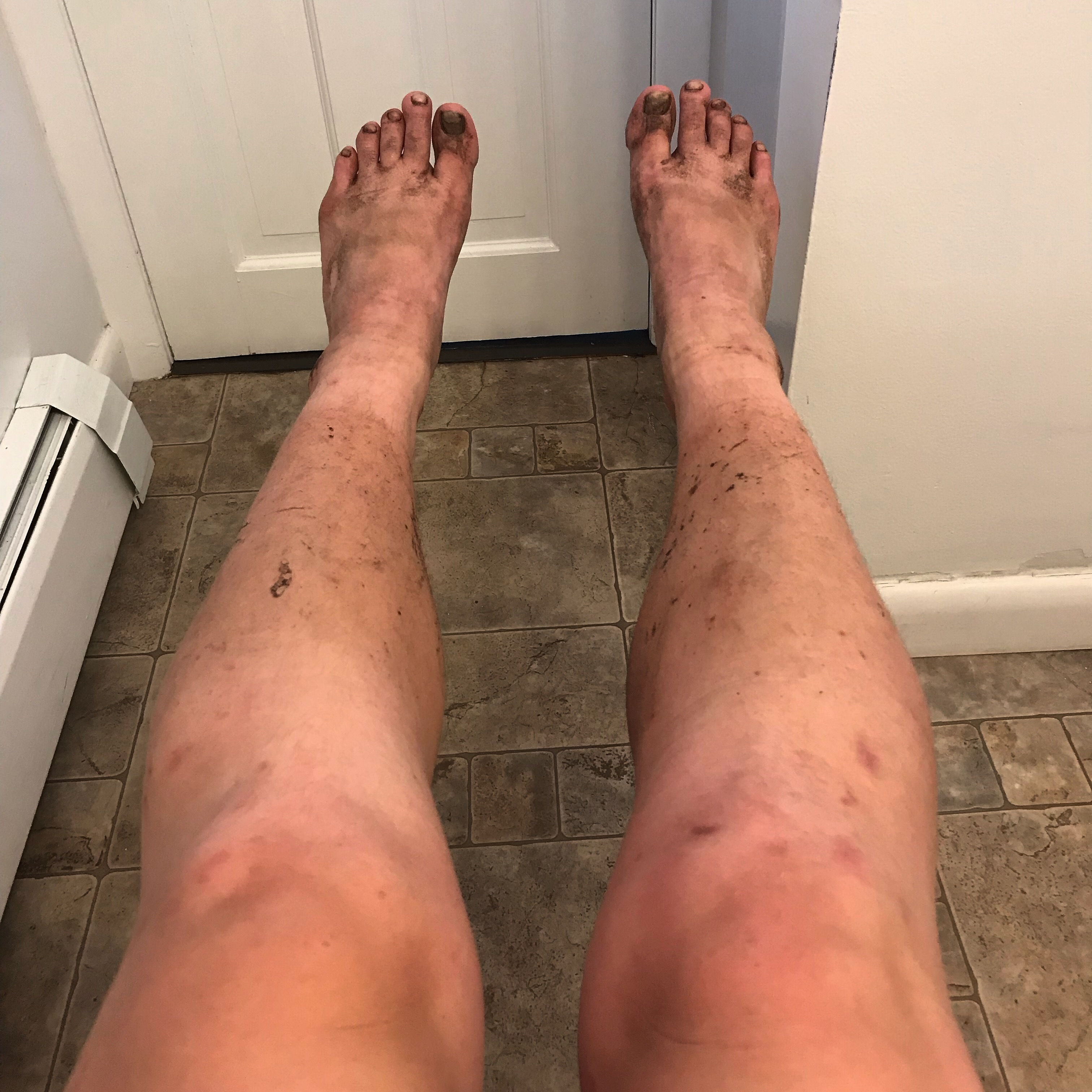 A man I had met at the lodge at Mount Greylock named Trigger was also at the road, and I asked him which side of the road I needed to be thumbing on.  After talking for a bit we realized we were both headed to the same place to run errands and then get shuttled to the hostel, so we decided to stick together.  The hitch was easy as pie; a solo woman in a pickup truck pulled over for us after only a few minutes holding up our thumbs.  We were a filthy, stinking mess, and I assumed we would sit in the bed of her truck, but Trigger stopped me and said, “Oh no, don’t sit back there.”  Which I thought was weird, but I went ahead and got in the truck and felt incredibly guilty for how muddy and stinky I was.

The lady’s name was Josie, and she was playing great music, a lot of the best songs of Southern rock with plenty of Led Zeppelin mixed in.  She said she traveled that road a lot for work, and she stopped to pick up hikers anytime she saw them there.  I’m incredibly thankful for these people.  Many of them solo women.  The ones who know what’s up with the trail, and know how to help us, and do it often.  Women looking out for women.

Soon enough, Josie dropped us off in the parking lot of a Ben & Jerry’s storefront.  Ben & Jerry’s, founded in Vermont.  We were in Vermont.  The birthplace of Ben & Jerry’s.  So obviously that was our first stop, and we sat on a bench eating hand-dipped Ben & Jerry’s in waffle cones.  Ahhh, Vermont.  The 12-person tramily I had recently been running into walked past as Trigger and I sat on the bench, and this time they all lit up and waved warmly to me as they passed.  I spoke happily to each of them, as they walked with their thumbs out, trying to get a hitch back to the trail. 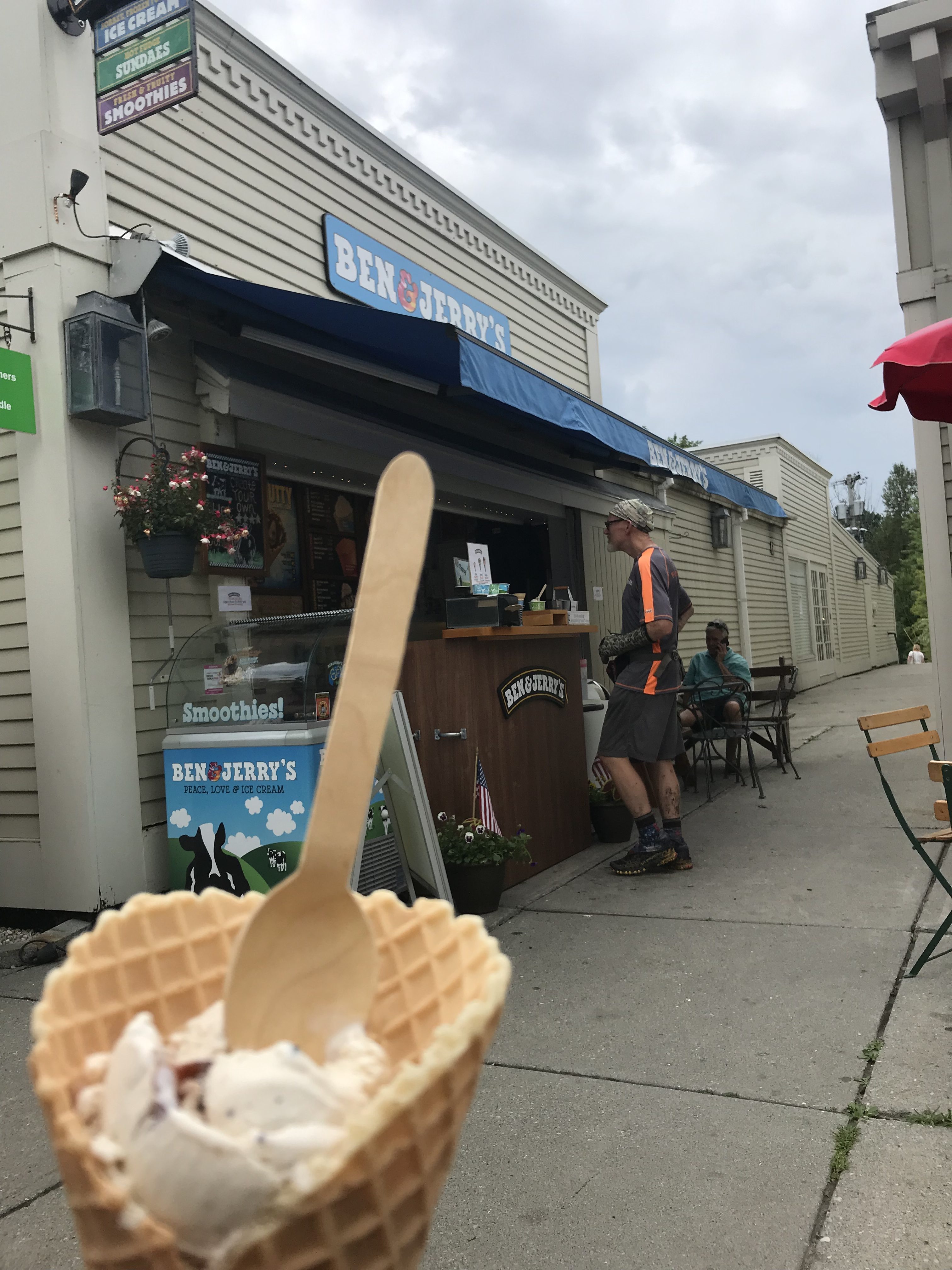 If you don’t eat Ben & Jerry’s while you’re in Vermont, are you even hiking the AT?

After the ice cream we hit a local burger place and ordered giant portions of food.  A traveling salesman took interest in us and we all ended up sitting together to have lunch.  We chatted about our lives.  Three strangers, alone and constantly in transit.  A businessman and two disgusting hikers.  Two older men and one young woman.  When would these three people ever sit down and have a conversation together under any other circumstances?  That’s the beauty of this lifestyle.

Once we finally filled our seemingly endless pits of hunger, we ran all our errands together, then got shuttled to Green Mountain Hostel, which was the most amazing, comforting place.  I ate and lounged and hung out with people and watched a lot of movies.  All of us saw a rainbow together and it was one of the most purely happy moments I’ve ever been a part of.  I finally met Johnny Appleseed, a guy hiking the trail from West Virginia, and every time I would tell people I was from West Virginia, they would ask if I knew Johnny Appleseed.  I’d never met him, but I finally did at Green Mountain Hostel.  I hoped he would feel instantly bonded because West Virginia pride runs deep, but he seemed rather uninterested in discussing our shared birth-state.  I took a zero day there, and the night before going back to the trail, I stayed awake past midnight watching The Hunger Games with a southbounder named One Step. 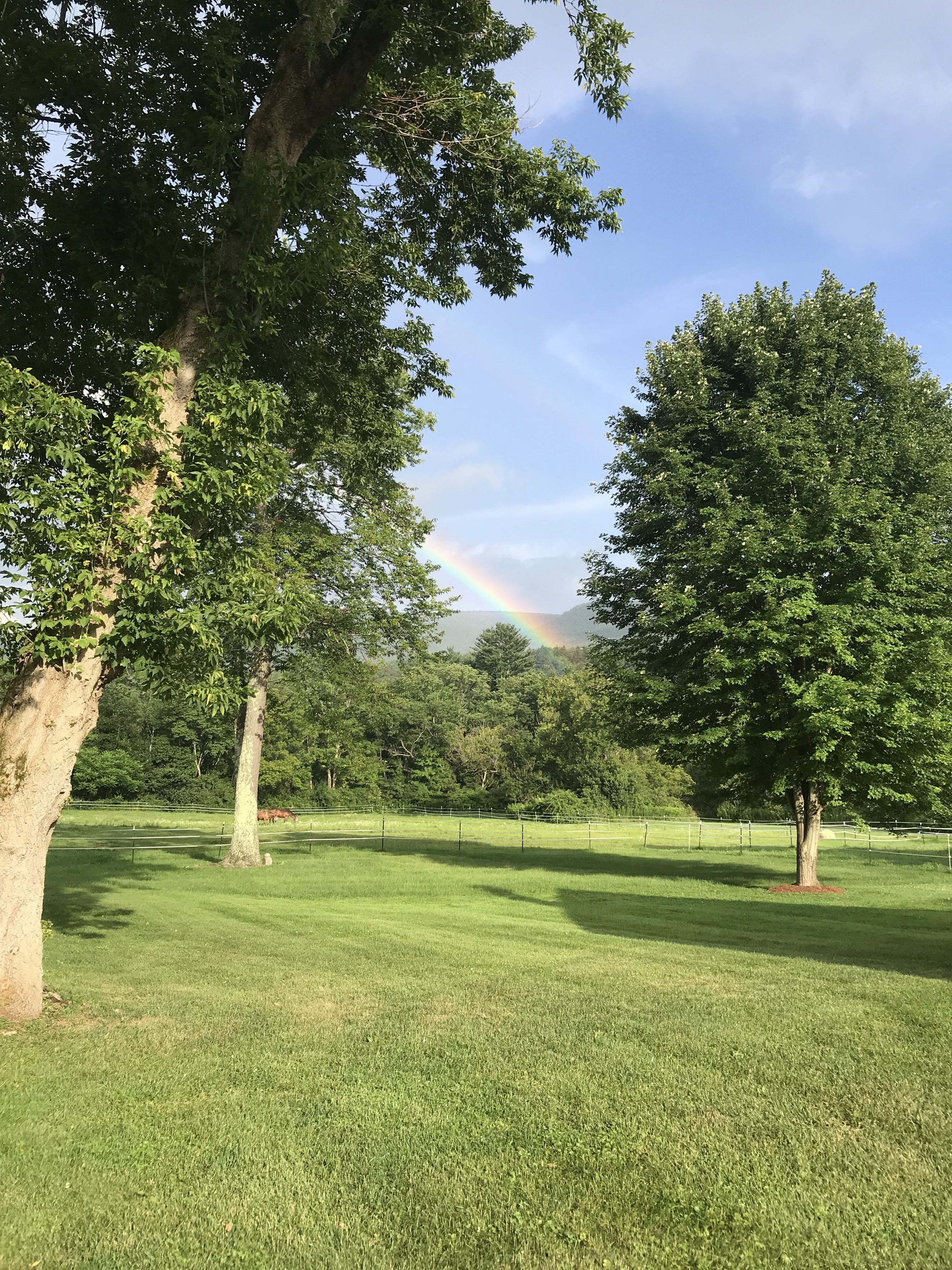 I stood beside one of the hostel owners and took this photo and he sincerely said to me, “It doesn’t get more Vermont than that.”

In the morning, a group of us were shuttled back to the trail and I proceeded to hike up and over four mountains in 14.8 miles.  The day passed easily, and I was feeling good.  Feeling adjusted.  Feeling like my ability to just do what I gotta do was finally up to par. 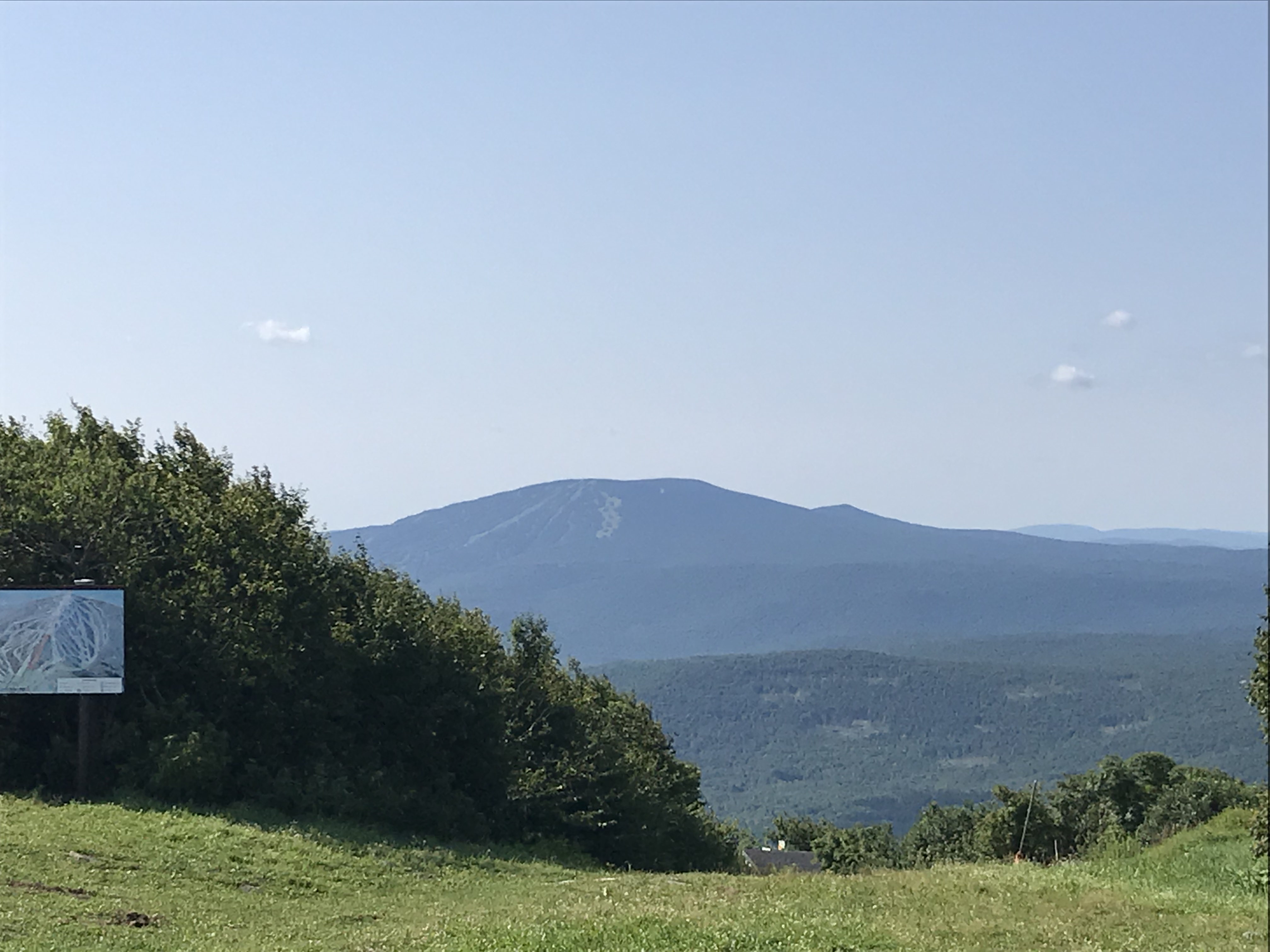 The next morning I waited out a rain shower under my tarp and tried to choke down some ramen and tea for breakfast.  A southbounder walked into camp and announced that there was really good trail magic at the road crossing in three miles.  Say no more.  I packed up everything in the dripping rain and set off.

When that southbounder had said “really good,” that was a complete understatement.  This trail magic had been a four-day continuous party, and I was lucky enough to at least catch the tail end of it.  There were food and drinks and The Grateful Dead playing over a speaker, a charging station for phones, dogs to love on, and cool people just hanging around and having a good time.  It was the most home I had felt in 65 days.  Good timing people just like me and my people.

I stayed there and hung out for over six hours.  At one point I got up to leave because I really had to pee and I figured I might as well get back into the woods and keep walking.  A hiker named Rondack caught me as I was loading my pack back up, and convinced me that I might as well stay a little longer.  By the end, there were four of us left there with the two guys doing the trail magic.  Me, Rondack, another northbounder named Recon, and a southbounder named Caitlin.  The four of us helped them clean up everything, and they filled all of our packs with obnoxious amounts of leftover food and drinks.

I planned to go 12 more miles that day, but acknowledged that it was getting pretty late in the day to put in that many miles after sitting around drinking PBR for six hours.  Rondack intervened and convinced me to hike two miles with him and Recon to Little Rock Pond where they planned to go swimming.  After the magical swimming experience I just had at Stratton Pond, it didn’t take much convincing, and soon enough the three of us were perched on a rock ledge above the pond, getting to know each other, but also not talking too much.  Just being together.  We found a stealth site to set up camp before finding a path down to the pond where we spent the rest of the daylight swimming. 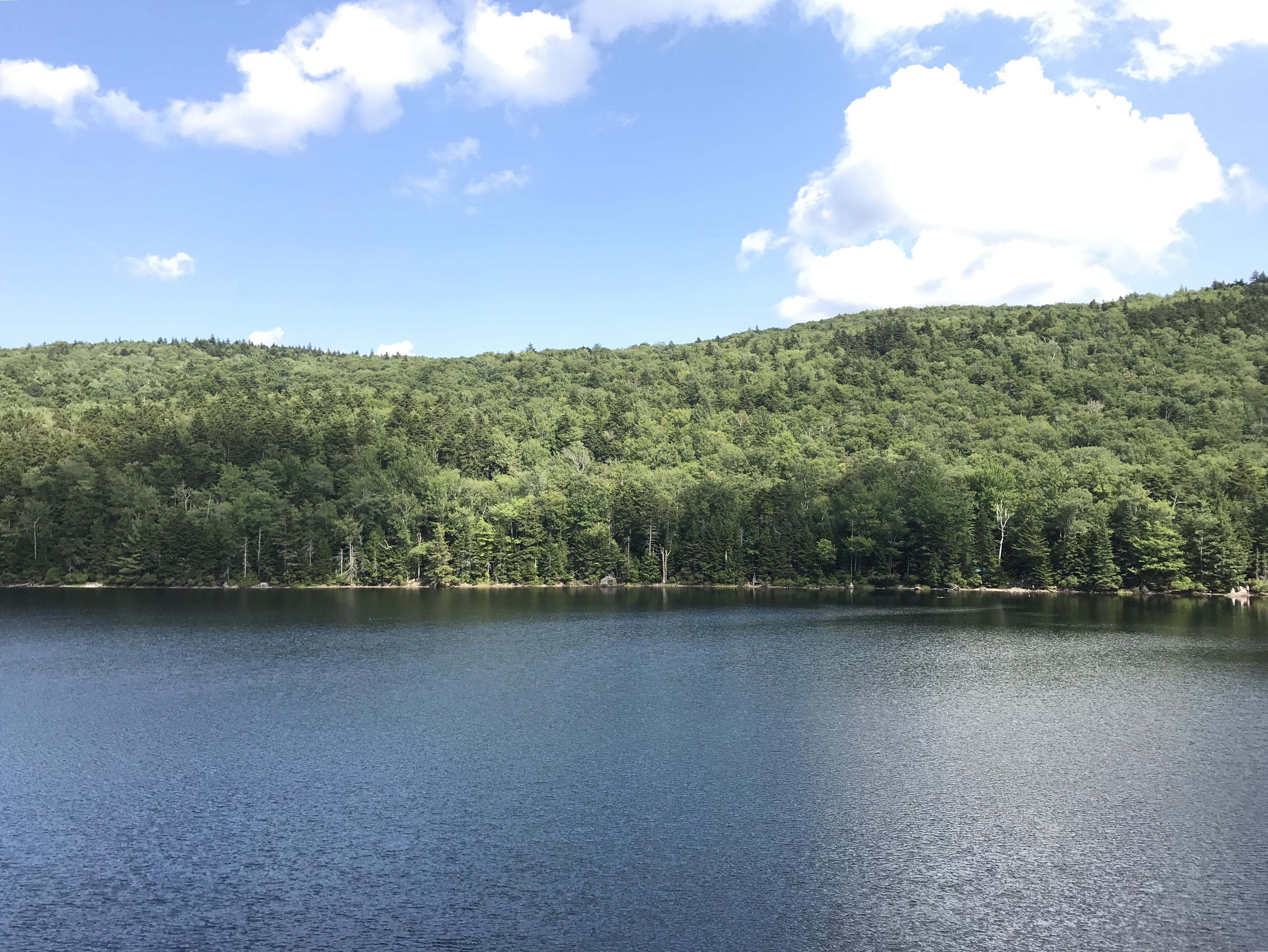 The view from our perch at Little Rock Pond.

Once it was dark, I was in my cozy pajamas again, and lying on the ground in the dirt beside our small campfire.  The album Animals by Pink Floyd was playing from Rondack’s phone, and the three of us stared at the fire and didn’t say a single word to each other for the entirety of the album.  It was such a peaceful and solidifying moment.

We all agreed to stick together at least to Rutland.  I feel at home around them and I was able to keep up with them hiking today, although it is much more intense than when I’m hiking alone.

You just never can tell when you’re going to meet the next cool person.