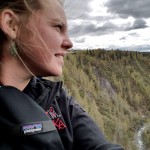 Finding Connections with Others Along the Way

Pop your head into any shelter along the AT and I would wager the hiker chatter circles three topics: gear, weather and terrain, injury. News on the trail hops forward and back through trail logs and loose lips. Of course we have cell phones and poor town Wi-Fi, but those are mostly off-trail modes of info deliverance.

Ah, yes, not even us scraggly hikers can completely disarm our phones for too long. It’s a little disheartening, but we need them to keep in touch with loved ones and to stay relative to the “real world.”

The perception of what’s real vs. not has been running through my mind during the last 200 miles or so and, no, this is not turning into a political rambling skirting the fake news buzz. As hikers, we often struggle with the notion that we are on a six-month vacation from “real life” and, let’s be honest, the argument for it is strong considering there are no time cards to punch and we aren’t trapped behind cookie-cutter desks trying to meet deadlines or earn bonuses. However, a different kind of work is transpiring out here and (at least for me) it has little to do with miles tallied.

Back in Hot Springs I found myself gorging on a massive plate of nachos while watching it rain into the swollen river. I sensed the man sitting next to me was a fellow hiker, yet I kept my eyes turned away, not having the gumption to go through the usual hiker small talk. All the more reason to zero in on trying not to let my cheese-coated fingers smudge the pages of my increasingly tattered copy of “Walden.” Besides looking down at my gooey fingers and hiker trash garb I was sure the man had already discounted me considering he seemed so much more dignified with his salt and pepper hair, name brand clothes, and glass of Cabernet.

Once my nachos were efficiently demolished and fingers comparatively clean my neighbor’s attention zoned in on me. In a thick, coarse accent he squarely asked what I was reading. He nodded indifferently at my response and we returned to our shared silence, but the allure of his mysterious accent kept my attention from returning to the Bible-thin Thoreau pages. Annoyed at my inability to keep my mind tucked into the book, I snapped it shut and leaned into further conversation. As expected, the first minutes were dry as we did the usual gear/weather/injury rundown, but I gleaned the info I craved: German ex-pat who settled in Israel 20 years ago. With the smorgasbord accent defined we settled back into our muted fellowship, watching the falling rain splatter and ripple into the choppy water.

He ordered another cab when I asked for my check, but by the time they arrived the rain was coming thicker, making me considerably less eager to budge. Without so much as a nod in my direction the man spoke, “If this isn’t real life, then what is?” I wasn’t sure what he meant. I was much less sure if he even meant to say it out loud. With his gaze still fixed ahead he explained that how minutes ago we had asked one another what we did in “real life” (hiker lingo for occupation) got him thinking.

Briefly, failing to connect the dots, I wondered if we were having a language barrier moment, but as the air between us settled for a third time I realized he was shooting his arrow much deeper. He now had my full attention and coincidentally (or not) so did Thoreau. I paged through the book finding the passage I most recently underlined where Thoreau muses about the value of spending the greater part of our “prime adult lives” stashing dollars in order to “live like a poet” during old age.

I mentioned the passage, he returned only with a knowing nod, but the conversation turned, actually it lit up, and we spent the next hour doused in philosophical ideologies. We chatted about how, in some ways, our aspirations to traverse up one of the oldest mountain ranges in the world is more real than the lives we put on pause.

Coming to no definitive conclusion we wrapped up as the rain slowed and parted ways. In the two weeks since that happenstance creekside conversation my mind never fully let it lie. My mind also never came to a conclusion over which life, which mode of existing, is more valuable or, for that matter, more “real.” The poet, Thoreau-loving part of my spirit clasped tightly to the German-Israeli’s mode of thought, but all the while the American ingrained mentality of work hard, climb the ladder screamed in my head. Through the internal clasping and screaming I kept climbing mountains in the rain until the trail dropped me in Damascus and took me to Crazy Larry’s doorstep.

Larry runs a small six-person hostel on the north side of town, he makes a bang-up pancake breakfast every morning for the hikers, and he’s got a helluva list of stories he loves to share. I don’t know specifically how Larry got the crazy added to the front of his name, but it isn’t hard to imagine it was well earned. Just go on down there and have a chat with him on his front porch and you’ll see. If you stay long enough you’ll see just how genuine he is.

I stayed at the hostel for two nights, doing a work-for-stay on the second day, and I tell you that no matter how you slice the pie of Larry’s life you’ll see he’s had a tough row to hoe, but he’s practically beaming because of it. He runs a fair business and is happy to share anything extra with hikers and the local kids who are constantly popping by.

Larry put tunes on while I swept and scrubbed the kitchen. Before long I was humming to the familiar bluegrass songs and found myself really wanting to make the place sparkle. While I worked I realized that watching Larry give more made me want to give more.

Rufus Wainwright’s rendition of “Hallelujah” came on. Usually I’m too shy to sing aloud to anyone other than furry four-legged friends, but there’s something about that song that always gets me quietly going. Larry played a different artist’s version of it. It wasn’t until the second round I realized we were both singing in hushed, off-chord voices, and that I was in the middle of another unlikely fellowship.
With my mind jumping between the conversation I shared with the German ex-pat and soaking in the swirling hallelujahs I realized I spent the last two weeks churning my mind over nothing. It suddenly seemed clear that how we choose to fill our days has nothing to do with one mentality being more real than another as long the hours are spent seeking goodness in ourselves and those we meet along the way.

I'm a writer, massage therapist, hospitality ninja, and adventure seeking warrior. I've made my home everywhere from Georgia to Maui to Colorado and most recently Alaska, yet I keep landing where my roots sprouted. For the last 3yrs I have been dedicated to personal growth and transformation in order to live a more fulfilling life free from the clutch of past trauma and societal standards I willingly adopted as my own.