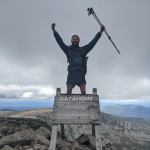 Writing while on the trail is hard. When you sit down, staring off into space or at a tree is very likely to consume much of your time. Tramily member Pat can even get in his sleeping bag at 5 p.m. and not-sleep for hours.

This will be a catch-up post covering time in Franklin, the journey through the NOC, and the Smokies.

This is a true trail town. The municipality supplies a $5 shuttle from at least two trailheads (during the week) and the town goes out of its way to accommodate hikers.

You can actually walk around town depending on where you stay, and it’s nice to have multiple options for food, resupply, and gear. We only went to Outdoor 76 on the main drag and I’m rocking their free thru-hiker buff as I write this.

My shoes imploded (yes, imploded) so I got a quick upgrade at 76 and enjoyed some beers in their back bar. For the shoe nerds, my Altra Superiors were amazing trail runners, but could only withstand 110 miles of backpacking. I switched to Brooks Cascadias which were the only size 14 they had in stock.

The town also features two breweries, Lazy Hiker and Currahee, and they’re both great. The latter has an amazing outdoor spot next to the river. It’s also a sweet live music spot. Needless to say, we met up with the Cult and got our drink on.

If you’re looking for a cheap stay, the Hilltop Inn was a great hiker hotel. Obviously a former dump of a roadside motel, it’s been brought into the future just enough for hikers to have a great time. Just don’t party in the parking lot after quiet hours. Sheesh.

The biggest downside came in trying to hitch back to the trail. We (thought) we scheduled a pick up from a local hostel at a price of $5 or maybe $10 per head for our group of 10 to arrive at 8:30am. At 9:30 a.m., the van arrived with only two remaining spots, one occupied by a dog.

Thanks to Bobby the Greek, a local shuttler, and some other guests who opted to start their day later, we were able to get to trail and started our hike around 11 a.m. Bobby crammed us in his SUV and only charged us $20. I highly recommend finding his details in Guthook if you need a ride.

Hiker Trash Tip: Figure out your rides to and from trail in advance. Franklin isn’t close.

Following our fiasco getting back on trail, we made decent time to our set destinations. The weather stayed great, we found some trail magic, and made some new friends and enemies.

“Enemies” is harsh, but we met some hikers who, let’s say, didn’t impress us. One in particular interacted rudely with the trail angels, continually bragged about his gear and knowledge, and finally derided some of us for stopping to enjoy a view. “It’ll cut into your time, man.” We caught him the next day at the NOC drinking beers.

Between the trail magic and the Wayah Shelter, I had my first adventure with hiking while thirsty. I missed the cistern after the bald and then pushed on about four miles to the next water source. It was hot and this was poorly planned. The leaf I finally spied, balanced just so to pour water off that cliffside, was incredible to come across. Mountain water is just better than tap. Period.

Somewhere along this stretch we also came across two maniacs named Backtrack and Maybe. We had met them back by Hiawassee at the Muskrat Shelter and learned they were both hiking the Eastern Continental Trail from Florida to Canada. Their stories of the first 2000-odd miles of their trek were amazing, and I hope to better document their experience later. Somehow we tricked these two into hiking with us, and our group unofficially grew as we made our way to the NOC.

We pushed to make it to the Nantahala Outdoor Center early enough for breakfast, a resupply, some relaxation time, and enough hours to make it up the next mountain. Unfortunately, nothing is ever open on Mondays or Tuesdays down here. The general store finally opened and we made do with its somewhat meager resupply options.

Next, we struggled to print our permits for the Smokies at the outfitter. The feds couldn’t keep their computers running, so we had to get a helpful woman named Pam to personally email us the forms. Then the outfitter could get us printed and on our way.

… On our way to get some beers and soak our feet on the other side of the river!

The morning was warm enough and the water cold enough to make this a great choice. The beer, as it often does, seemed like a great idea, but it made the steep climb out of the NOC god awful. By 12:30 p.m. the heat had set in and we struggled our way up to catch Amnesia and Iron Lung who had used their wisdom of years to skip the beer session.

The climb out of the NOC is steep. There are allegedly great views but we didn’t get any. The next day we pushed on to Cable Gap Shelter, which has a run-down shelter and a privy that somehow sends its particular odor both uphill and down to fumigate the tent sites. We also learned that if you mess up a bear hang and get a branch to try to go back through the carabiner you need to either call an arborist or get the whole tramily together to free that bag.

Fontana: A Lovely Resort Next to a Permanent Settlement of Hiker Filth

The resort town is a great spot. Getting to the marina brings you to a bathroom (with plumbing! But don’t try to flush too much) and there’s a number to call the $3 shuttle to “town.”

We shuttled to the general store/laundromat/post office area and got to our chores. This invoked multiple groups of hikers sitting around in various states of undress. The resupply at the general store had good options but the prices reflect they know they’re the only game in town.

Pushing on go the Fontana Dam Shelter, a.k.a the Fontana Hilton, was an easy mile or so past the marina, and what we found took me back to my pre-COVID days of attending festivals.

The area was overcrowded days before we got there. The 20 person shelter at capacity as well as all of the tenting and hammock areas. Tents were squeezed in on hills and the sides of the paved areas.

The reason for this is, I suppose, that there is potable water, a bathroom, and showers. People were there on their second or third zero day, so the number of hikers just piled up and up. With this came characters like “Bluntz” who was faded out of his mind when we arrived in the mid-afternoon, and continued his journey throughout the evening, culminating with thinking he lost the bag of smokables he was holding and then trying to light a bowl in the shelter at 10 p.m. Others simply drunkenly and loudly made their way to the top bunk, had a graphic conversation, then immediately passed out and started snoring as a team.

I’ve heard the trash situation got worse after we left, which is a shame because of what that does to the local fauna. We left at 7 a.m. while most of the party-goers were still comatose. The morning was beautiful and we broke our fast by the dam.

This concludes my “old man yells at cloud” portion of this post.

Ok, so this begins my “old man yells in cloud” portion of this post. The Great Smoky Mountains National Park is overrated, over regulated garbage. Fight me.

I’ll walk that back for a minute and start with some positives:

Getting out of the Smokies was a blast. We got some nicer weather, finally saw some views, and got the see groups of college kids starting a 2000 foot climb at 3 p.m. in woefully inadequate footwear.

We camped near Standing Bear hostel, did a small resupply with their (sometimes very) expired food, and pushed on from there. Max Patch was calling.