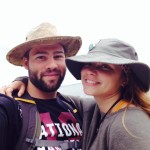 Out of the Frying Pan & Into the Fire: First Days On the Appalachian Trail

Morgan & I began our northbound thru hike today in Amicalola Falls State Park in northern Georgia! The Falls themselves are 729 feet up, the highest waterfall east of the Mississippi River. From the visitor center in the park, there is an 8.8 mile Approach Trail that leads to the top of Springer Mountain, the southern terminus of the Appalachian Trail.

Morgan’s dad Jason & her stepmom Nikki drove the two of us up here from Jacksonville, FL. We left Jacksonville the afternoon of February 27th and stayed in a motel in Dawsonville, GA, about 30 minutes from Amicalola Falls. During the drive, the temperature dropped about 25 degrees, and though we couldn’t see it, there were patches of ice & snow on the ground! It was the eve of our thru hike and we couldn’t sleep, possibly due to Jason’s snoring! We woke up around 7am and took our final hot shower before heading north into the cold. With the sun out, we could see just how much snow & ice was on the ground.

We arrived at the park and entered the visitor center to register our thru hike. We did not expect to see an owl and a hawk in there on a caretaker’s arm! These animals had been injured and couldn’t be released back into the wild .Just one of many surprises we had coming our way! We weighed our packs outside; mine was 36 lbs., Morgan’s was 38! We took a few more pictures at the beginning of the Approach Trail and bid farewell to Morgan’s parents. We are so happy they were the ones to drop us off before we hiked north for 6 months. The beginning of the trail led to the falls, and up a staircase of 604 steps to the top. The falls are breathtaking and impressive and the park is worth visiting exclusively to see them.

From the top of the falls we continued on the approach trail, which was fully blanketed in snow. We met several snowmen along the way, but only a couple other hikers. The sun came out around 1pm as we made our way up and down the hillsides. We covered Frosty Mountain, trekked over Woody Knob and descended through Nimblewill Gap. The only tangible training you can do for lengthy backpacking hike is a lengthy backpacking hike! We decided to take our first day easy, as we had read to do so many times previous. We arrived at Black Gap Shelter and decided to stop for the day. We set up our brand new NEMO Equipment tent (thank you Thru Hike Syndicate!), the Dagger 2 Person, in the snow close to the shelter. Big mistake.

The cold was starting to seep through our layers as the sun waned. We boiled potatoes and cooked them with onions, garlic & seasoning. We ate and got into our sleeping bags early to try and keep warm. We were sleeping on an icebox though. The cold continued to attack us throughout the night as we shivered in and out of sleep…

The cold had drained the both of us through the night and in the morning we rose early and tried to pack up as quickly as we could to get moving and get our body temperatures up. My fingers burned as we folded the tent. We warmed quickly as we began hiking and with a new spring in our step, summited the mile and a half to Springer Mountain to officially begin our thru hike! We kept pushing from there and arrived at Stover Creek Shelter. It’s a beautiful hut, with a top and bottom sleeping area and windows looking out over the creek behind it. We stopped there for a quick refuel, reshuffling our packs. 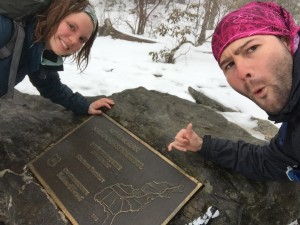 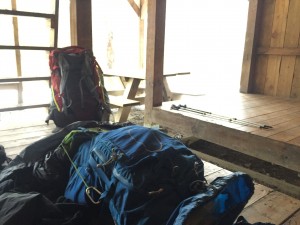 From there, we passed by a much more scenic extent of forest. Massive, thick pine trees, beautifully brown and green, well-spaced from each other & coated with fresh layers of snowfall. We stopped at Three Forks to refill our Nalgene bottles. We felt good about the miles we were getting through and decided to pass up Hawk Mountain Shelter to tent camp somewhere further. Morgan loved stopping to scrape away the top layer of snow and eat a little snowball underneath! We found a relatively flat space up from Hightower Gap and decided to make camp. 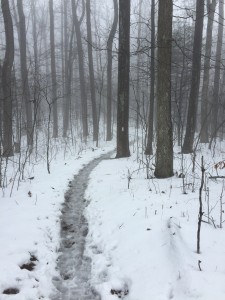 Ice and Slush and Snow

Still covered with snow, we decided to scrape it away to fix the tent to solid ground. The cold confronted us again as soon as we stopped moving. We probably pushed ourselves too hard that day, and the cold coupled with exhaustion meant we fell asleep soon after sundown…

Woke up to the hoots of an owl just overhead. Found myself to be freezing yet again; the bottom of my sleeping bag was wet, as was my pack just outside in the vestibule, as were my trail pants, as were my shoes… you get it. I failed to secure the rainfly properly and the overnight rains had blown it around, allowing water to seep in wherever it could. We packed up even faster than the prior morning and got moving as swiftly as imaginable. Again, we warmed with movement, but I knew we needed to dry our things before sleeping in the tent that night. We aimed for Gooch Mountain Shelter, which was close to 7 miles from our start. 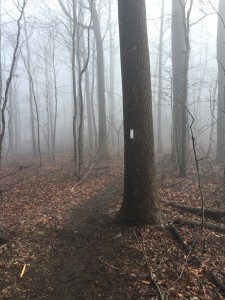 Blaze Among the Fog

We didn’t know if the weather would clear enough for our belongings to dry sufficiently but we had no choice but to walk in hope. Our lack of energy was also denting our expectations but we kept moving. Despite our situation, the landscape surrounding Justus Creek was gorgeous. Green and lush and alive! As soon as we finished the steps up past the creek, Mr. Golden Sun splayed his life saving rays across us and the day took a complete 180. We arrived at Gooch Mountain Shelter around 3pm and found it to be stocked with other hikers. Fortunately, there are several campsites surrounding the shelter. We strung paracord around a few trees and draped our soaked gear. We changed clothes and just basked in the sunlight. It is truly mystical to long for the simplicity of sunlight and to receive it like a blessing at the last! 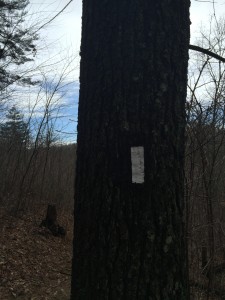 We finally had the chance to tear open the pouches of wild Alaskan salmon we had ordered from Vital Choice and I was beyond impressed. I added a bit of raw chopped garlic and olive oil and put my taste buds in heaven. The salmon is well worth the price for what it offers not only in taste but in nutrition, especially for long distance hiking. We enjoyed the last of the sunlight and slipped into our tent early for our best night’s sleep yet… 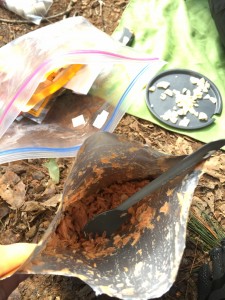 Hmm… Not the most appetizing photo… You’ll just have to take my word for it!

I woke up quite early this morning in the pre-dawn light. Warmer and almost fully dry, I felt the best I had so far on our journey. We took our time getting ready; made some hot tea, and I ate some coconut oil and made a quick chia seed/flax seed mixture to drink. We were some of the last ones out of the shelter but with warmer weather, we enjoyed taking it slow. Foggy, misty, muddy and drizzling again, we pushed on towards Gooch Gap with the intention of stopping in Suches, GA for the night to fully dry our clothes, tent and sleeping bags.

As we made our way down from Gooch Gap, it happened. I didn’t expect it so early into our thru hike, but nonetheless, I was on cloud 9… TRAIL MAGIC!!! The trail angel named Fresh Ground was whippin’ up huge omelets and banana pancakes for hikers. There were about 12 of us packed under his tent, sipping hot coffee and enjoying every single bite. It took me off guard but it was truly a magical moment, one of a kind. We chatted for 30 minutes as everyone eventually made their way back into the rain. Thank you so much to Fresh Ground, Barb & Leonard for providing all of us a moment we will never forget. 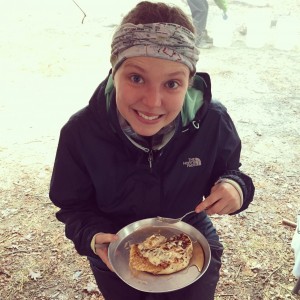 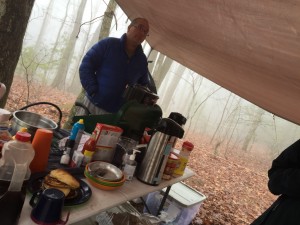 We continued on through the rain, but how could we not be happy?! Full bellies and high spirits carried us up and over Ramrock Mountain, which I imagine has a wonderful view when it isn’t completely obscured by fog. We passed a ridge runner named Seesu who informed us there were 40 other hikers in front of us. We arrived at Woody Gap and called the Wolfpen Gap Country Store for a ride into town. A local named Mike gave us a ride and we were grateful. The store is quaint and homey, with a television and couch downstairs and bunkrooms, bathroom & shower above. We ate a large pizza, sipped a few beers, took care of laundry and enjoyed a hot shower. The owners, Becky & Stephen, have two pups that are small and extremely friendly, and they roam the store freely. As Morgan and I waited for our laundry to finish, we lounged on the couch and Jinx hopped up and cuddled with us. It was a moment from home in a foreign place. Completely comforting. The adventure continues… 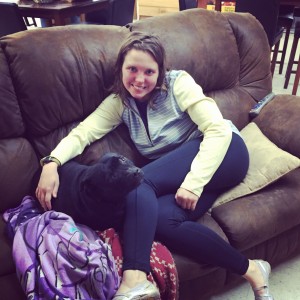 I am searching for an adventure, for solitude, an escape from civilization, to refocus and revitalize my mind. I'm taking full advantage of the opportunity to sleep under the stars, walk miles a day in the wilderness and to simply bask in time. I am fascinated with studying our environment, health, and on improving the state of them, both independently and at Florida State University. This year, my girlfriend Morgan and I will be completing our first thru hike of the Appalachian Trail! We want to share our adventure with you as well!