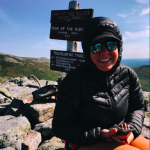 Seems like it was just a few days ago that I was sitting in my flat studying for exams and wistfully daydreaming about the trail. But now I’m here, well over 100 miles in, and I’m beyond happy.

Some highlights of my first week on trail: first hitch of the trip, saw my first-ever rattlesnake, passing the Georgia-North Carolina border, first 20-plus mile day, and passing the 100-mile mark.

I took the first week pretty slow – slower than I had originally hoped to – but my body needed a bit more time than I anticipated to readjust to hiking every day. That’s alright, though, I’d rather have an easy first week than wreck my body and not be able to make it back to Maine. 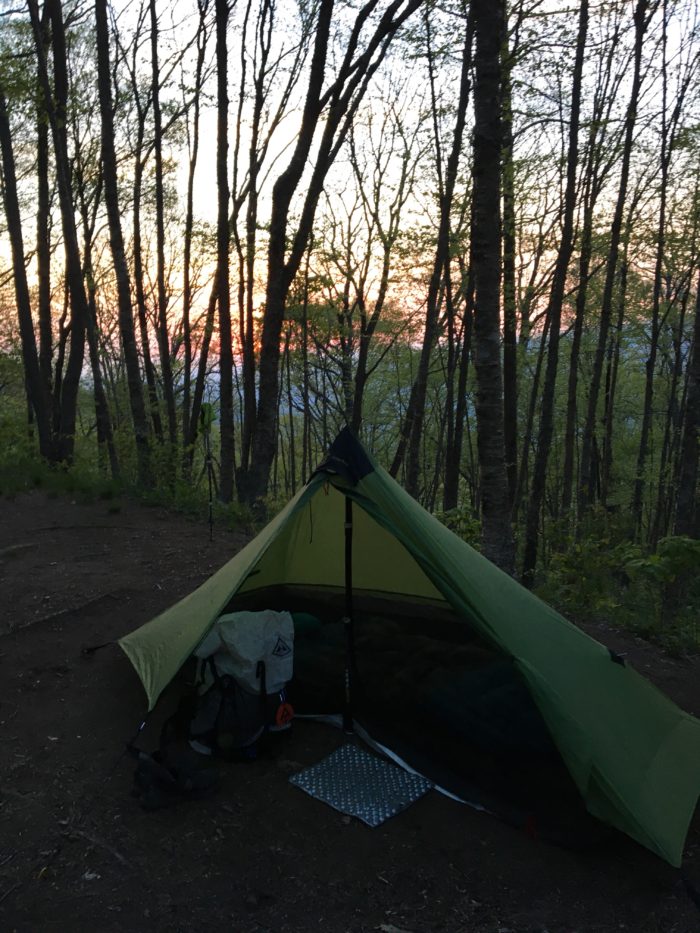 One factor to my slower pace was that Georgia is far tougher than I had anticipated – I’ve always heard that the south is so much easier than the north, and by direct comparison, yeah sure. I suppose the nice footing and switchbacks of Georgia are easier than the straight-up rock climbing you get a lot of in Maine. But that doesn’t mean it’s easy. 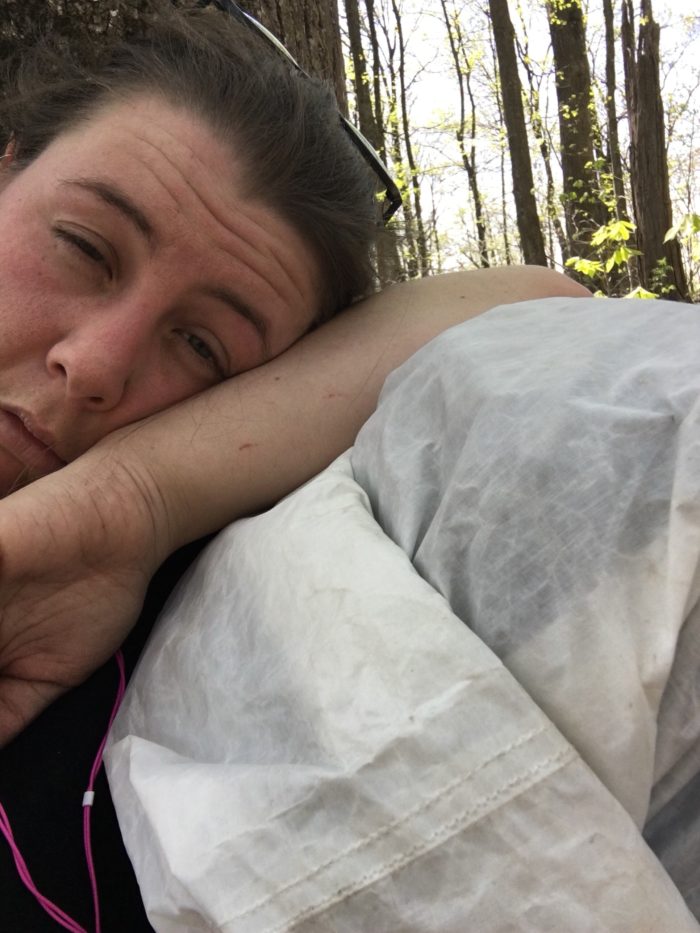 That midday Georgia heat getting the better of me.

Part of the reason it was so tough I think could – at least for me- be attributed to the heat. I knew it would be warmer than spring at home, of course, but I had not fully anticipated the humid 80 degree days in early May. Georgia was hot. I’ve never done well in anything over 70 degrees and living in Scotland’s mild year-round climate hasn’t done anything to improve that.

We also didn’t get any real rain the first week, so everything was dusty and dry, and I began doing something I rarely do on trail: praying for rain. I kinda got my wish on day four because we did get about 15 minutes of wicked harsh hail (who knew it was cold enough for that) followed by a bit of rain from a nearby storm, but nothing that lasted more than 30 minutes. It felt nice – but that heat persisted over the next few days.

Gonna be honest, though – it was totally worth it because damn, Georgia was pretty freakin’ spectacular. 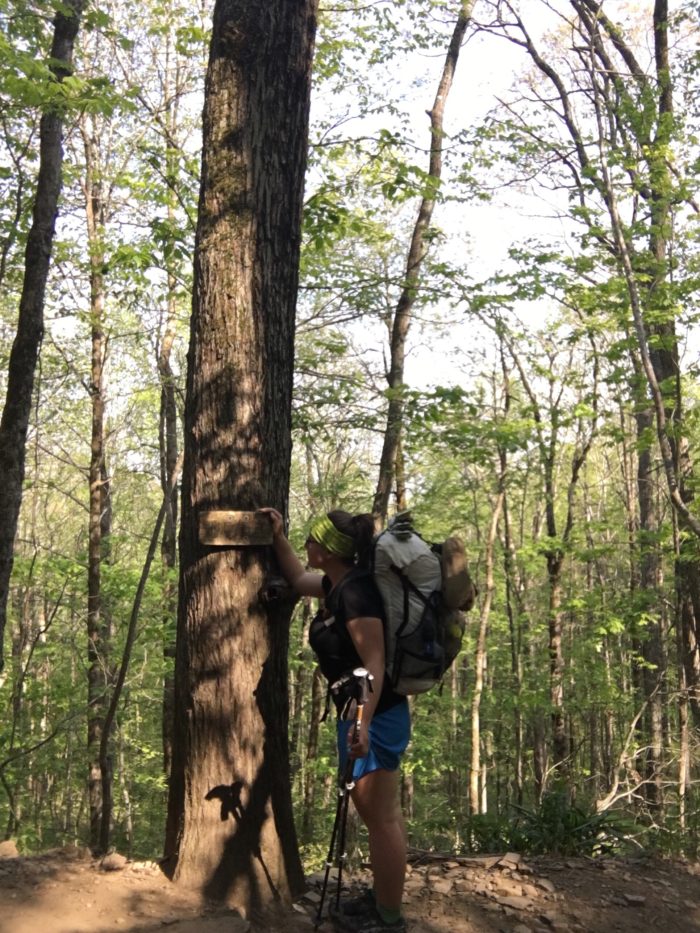 Now that we’ve covered the weather it’s time to cover the people. I kinda anticipated that starting this late would mean that I wouldn’t have as big a group of fellow thru-hikers than if I were to start in March or April, but the first two nights there were actually a ton of people who were headed to Maine. Unfortunately, I ended up leaving a lot of them behind as their mileage was a bit slower than mine (I think a fair few of them were flip flopping, so they have a bit more flexibility in that regard than I do).

Sweltering hot but worth it.

The first few days or so I matched miles with a few section hikers and one other thru-hiker, and it was really nice to kind of have a steady group around most of the time. Always leapfrogging with each other on the trail and ending up at the same shelters or campsites. Gonna be honest, it was really sad to see all the section hikers peel off after a few days. Thus far I’ve seen only about four consistent thru-hikers in my little sphere.

My first real resupply and town adventure was in Hiawassee. I hiked in early and stopped at Top of Georgia to get a shower and some laundry done and they gave me a pair of scrubs to wear while my stuff was being cleaned. I thought it might be a bit tricky to hitch into town while looking like an escaped mental patient – but we actually only had to wait about five minutes before a semi with an empty flatbed pulled over. Two guys with wicked thick Southern accents hopped out and beckoned us over to “jump on up” and we got to sit on the back while speeding down a twisty Georgia road. Probably not the safest thing I’ve ever done (sorry, mom) but an insanely fun adventure nonetheless. We loaded up on (way too much) food, then made our way to Subway for some huge sandwiches that we devoured in minutes. 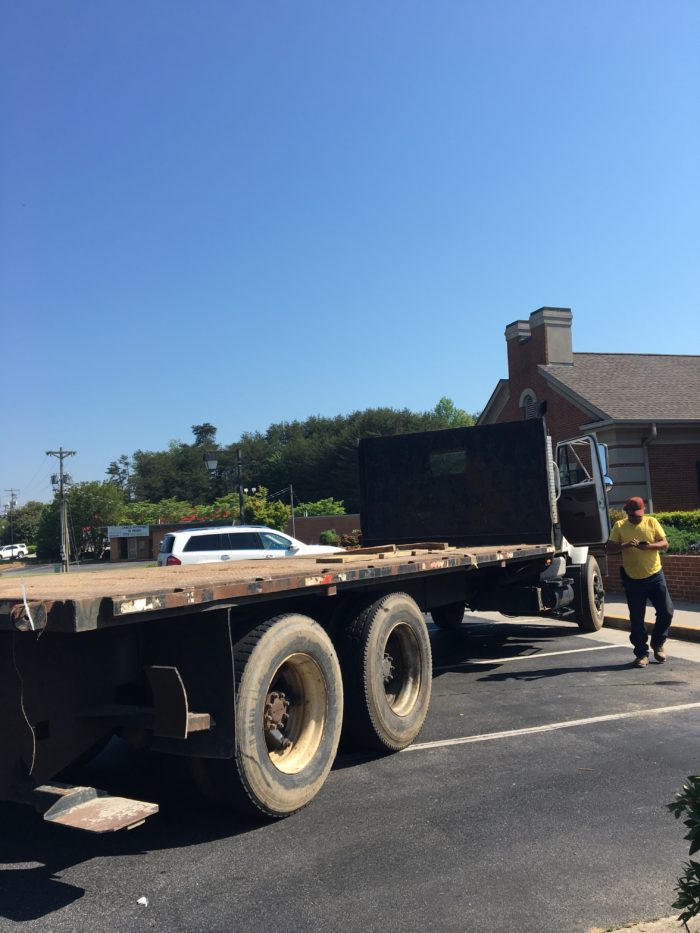 Once back on the trail, I made my way the next nine miles to the border. Spent the night right there in Bly Gap and got up the next morning to do my first 24-mile day (helped along by some much appreciated trail magic) which took me past the 100-mile mark (finally). 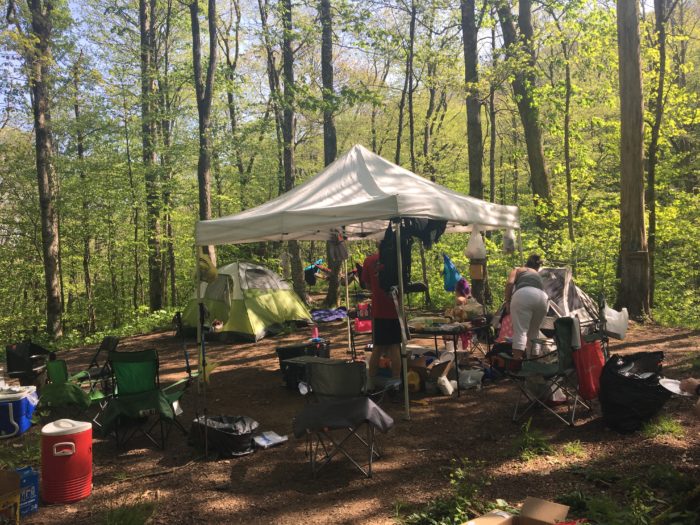 Not sure if it was totally in my head or not, but that first day in North Carolina was like heaven – easier climbs, wonderfully maintained trail, slightly overcast, constant cool breeze, and amazing views. 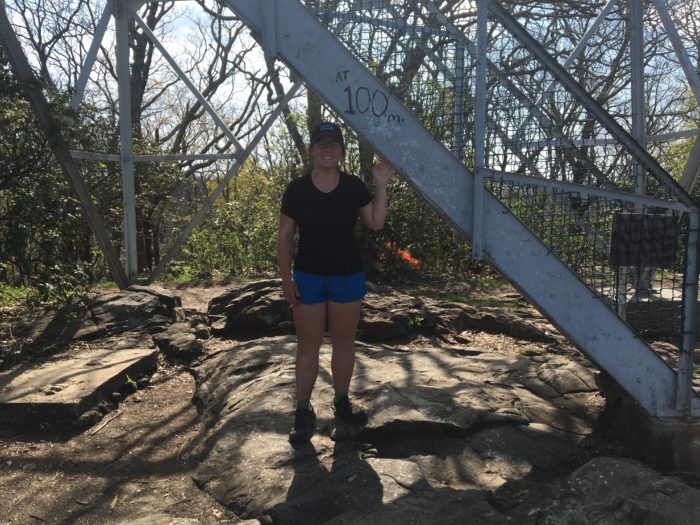 So far my body is holding up well – a few twinges at the start but I’ve mostly adapted. All in all it’s been an amazing first week (out of many more to come), with moments and surprises both pleasant and not so pleasant (looking at you, rattlesnake). Beyond stoked to keep on trucking and to see what else the trail has in store.

Hiya everyone, my name is Meghan. I was born and raised in the foothills of western Maine - right where the Mahoosucs and the Whites meet. I grew up hiking the toughest parts of the AT and I'm a member of the New Hampshire 4000 Footer Club. While my summers are typically spent hiking around Maine and New Hampshire, come autumn I ship off to Scotland where I’m attending university and work as a ski racing coach. This summer though, I am thru-hiking the AT. I won’t get to start until after exams, but I am beyond excited to start this lifelong dream.