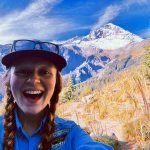 Goldilocks and the Three Bears

Once upon a time there was a little thru-hiker named Indy. Among other things, Indy was named for her independence; she really liked to do her own thing. Indy liked to hike fast and made excellent progress on the trail, but she had her faults; one being impatience and the other, having the need to be the perfect backpacker.

At the start of Indy’s hike, the weather was sweltering. By the end of each day, clothes were drenched in sweat and sleeping bags were slept on top of rather than inside.

Because of the heat, Indy had the bright idea to send her sleeping bag home and replace it with a liner. Not only would she be cooler at night, her pack would weigh less, too! After a week or so in the heat, Indy made the decision, the sleeping bag was going home and the liner would be on the way.

When it came time to change out the two, a week of storms hit the trail and surrounding area. The temperature remained warm throughout the storms, but when the rain died down and Indy made the gear change, a cold front blew in.

The first night back on the trail, Indy hiked up to 5,000 feet elevation and set up camp for the night. Indy realized it was chilly during day, but she figured everything would be fine. She also had some good company for the night, the three bears: Giggles, Second Wind, and Audiobook.

Second Wind got a fire going, as he usually does. And while it helped the situation, everyone realized it was the coolest night yet on the trail.

Indy was so chilled she retired to her tent early. She was exhausted and hoped that would be enough for her to fall asleep.

She lasted for about a half hour in her tent on the side of the mountain before she began to shake from the cold air. When she couldn’t take the cold any longer, she went back out to the fire to consult the bears about how to get through the night.

Unlike the well-known fable, the three bears had a lot to give Indy; she was the one so reluctant to accept.

One bear gave Indy his warm spot by the fire. Another gave her his jacket, four sizes too big, doubling as a sleeping bag. The final bear shared his sleeping bag as a blanket and tent space with Indy to ensure she wouldn’t turn into a little thru-hiking popsicle.

This continued for the next three days. Even at lower elevation, the temps remained in the lower 50s. Together, the three bears gave Indy comfort and reassurance that mistakes happen and there would be plenty of warmth to go around.

As a thru-hiker, I think it’s fair to say that there is always something to learn. It is your responsibility to be prepared because things (like the weather) can quickly change on the trail, and you may not always have quick access to a remedy.

You are responsible for yourself out on the trail, you cannot and should not expect others to come to your rescue; however, everyone really cares about one another out here. If you are concerned about something SAY something. You may be surprised with what others have to offer.

And always remember to be nice to yourself. Remember at the start of the story, when I said Indy needs to be the best backpacker? Well, that’s just not realistic. I’ve come to find that there is no such thing as the best backpacker; we all have different styles and we’re all out here just trying to make it.

With these three bears by her side, Goldilocks is sure to live happily ever after. Happy trails!

What's good trail's folk? My name is Kelly aka Sprout and I love walking places and writing about them! My list of trails is this: Camino de Santiago- the French Way, ~700 miles of the AT, New England Trail, Long Trail, Rachel Carson Trail, Colorado Trail, Wonderland Trail, Timberland Trail, Lost Coast Trail and soon to be the PCT! Follow along on what I know will be a journey that will change my life for the better!