The day we stepped foot in Vermont, the clouds parted and the angels sang (or maybe it was just Inasias). We were blessed with perfect hiking weather for almost the entire state. Clear blue sky, temps in the 60s, low humidity, and cool nights made Vermont one of my favorite states on trail. I have really come to appreciate waking up and not immediately being drenched in sweat. I’m surrounded by beautiful pine forests all day. As for the mud, it didn’t really bother me at all. 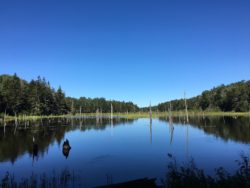 The closer I get to New Hampshire, the more people I get to see from back home. On our first full day in Vermont I got to see my mom for the first time since April. She was set up with my aunt at the Route 9 crossing, doing trail magic for all the hikers coming through. I was so excited to see them that I ran across the street and through the parking lot right into a big mom hug. She didn’t seem to care that I smelled like I’d been in the woods for three days.

Mom on left with Ella the dog, Aunt Jodi on right, and GQ with the photobomb

My family also provided trail magic, and it was nothing short of epic. They had a table full of goodies, including sandwiches they made to order. There were basic resupply items like toilet paper, chapstick, tissues, and hand sanitizer. They filled a massive cooler with every kind of drink you could possibly ask for (soda, beer, juice, water, sports drinks, etc). They even provided chairs for hikers to sit in while they ate. 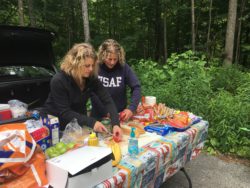 As much as I wanted to, I couldn’t stay there forever. I said my good byes to my family and moved on to Glastinbury Mountain where I would camp that night. On the way, I passed an old friend from Georgia. The last time I saw Old School was the day I left Neels Gap after breaking my fever. The last thing he said to me was, “You’re going to make it. With some people you can just tell, and I know you’ll make it.” So naturally the first thing he said to me today was, “I told you you’d make it.” Yes sir, that you did. 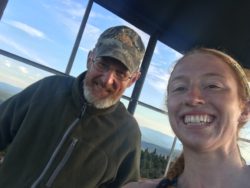 After arriving in Manchester Center, one of the first stops is naturally the grocery store. I was walking around trying to find things to eat, when another customer stopped me. “Hi can you tell me where the bathroom is?” they asked. I was baffled, and it must have shown on my face because they followed up with, “Oh you don’t work here, sorry about that.” 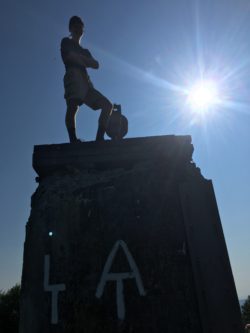 Peregrine on a pillar

Had this been the first time this has happened to me, it wouldn’t seem strange. However, this was probably the third time in as many different towns I’ve been mistaken for an employee. I mean come on people I haven’t even showered yet! I’m still wearing my hiking clothes! What is it that makes me look like I work at Price Chopper?

“Confidence,” was Peregrine’s suggestion. “You carry yourself as if you own the place.”

I suppose he’s right. After all, it’s sort of difficult to walk north for 1600 miles and not develop a purpose of direction. The trail has definitely made me much more self assured than I was before. 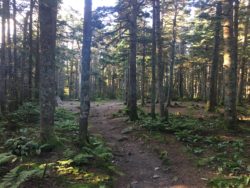 That’s Not a Fork

While in Manchester Center, we stayed at the Green Mountain Hostel. This is worth mentioning because this hostel is awesome. Mostly because they have an amazing kitchen. It was here that we started the trend of cooking while in town instead of going out. When you give a hiker a kitchen, they make bread, apple pie, and jalapeno poppers. We had a ridiculous amount of food on our hands. 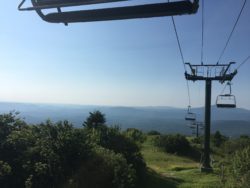 There was in fact so much food that Inasias had gone to bed before it was finished being cooked. When I went up later, she was already (mostly) asleep. Since it was hot, I closed all the windows and turned the AC on. This prompted her to sit up in bed and look at me. “Is that ok?” I asked her.

“Is that a fork?” she replied. I was so confused. A fork? What? She turned away from me and looked back towards the AC unit. “That’s not a fork, that’s Peregrine” she told me. With that, she flopped back down on her bed and continued sleeping. 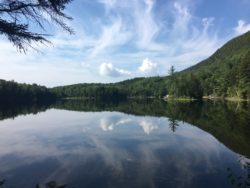 Let it be noted that Peregrine was still downstairs.

Also, quick shoutout to Sweeper for sending me some delicious baked goods!

It took about three days to go from Manchester Center to Killington, but in that time I hardly saw Peregrine or Inasias at all. After the first night out of town, I decided that I wanted to try to camp alone. My attempt was foiled by other hikers that wanted to camp in the same spot as me, but by the time I got there the last thing I wanted to do was another mile just to be with my friends. 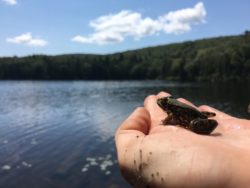 The next day I went up Killington peak, the first mountain over 4,000 feet in months. The steep 0.2 side trail to the summit was definitely worth it. I visited the summit restaurant, had myself a summit beer, and headed back down to the AT. By the time I’d gotten back to Cooper’s Cabin, Peregrine had arrived. So I, being the good friend that I am, did the 0.2 side trail again, visited the summit restaurant again, and had yet another summit beer. 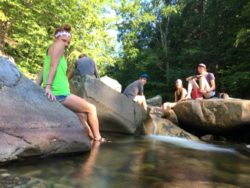 River and relax with some hiker trash

By the time we arrived in the town of Killington, Inasias had already booked and checked into a room at the Killington Motel, and ordered both myself and Peregrine our own pizzas. Benefits of having someone faster than you in the tramily: they break the spiderwebs and get the rooms all set by the time you get there.

The night out of Killington I decided to stay at the Lookout, a cabin with a platform on the roof that afforded 360 views. This put me 2 miles behind my trail family, but it was worth it. I slept up on the platform even though it was wicked windy. The sunset was amazing, and the moon was so incredibly bright that I couldn’t see the stars. 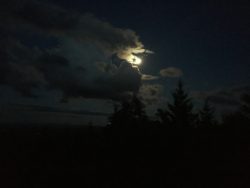 The next day I decided to catch up to Peregrine and Inasias. This meant I’d have to do 23 miles to the Happy Hill Shelter. Ok, no problem right? Wrong. Early on in the day it became apparent that I had somehow bruised my heels. The rest of the day would be incredibly slow going. But I was determined, I was going to get to that shelter dammit. 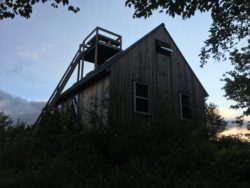 I stopped at 5:30 to make dinner. My feet were grateful for the break, and I could move at least a little faster after that. Standing in between me and the shelter was a mile long road walk and 3 more miles of trail. Once I got back in the woods it got dark really fast. I hiked as fast as I could to try to beat night hiking, but it wasn’t fast enough. I turned on my headlamp when I stopped being able to move quickly without fear of tripping over something. Luckily, I didn’t have too far to go in the dark. Around 9:00, I rolled into the shelter. Mission accomplished.

Vermont is easily one of my favorite states on the trail. The hiking was just stunning, I camped in some amazing places, and had the most incredible of views. Somewhere along the line, I decided I want to do the Long Trail. Not right now, don’t worry. I’ve still got 500 or so miles left of this trail to do! However, coming back to this state is a must. 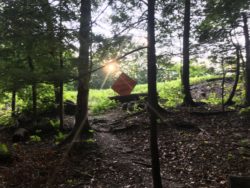 Now that I’ve put a pin in Vermont, it’s time to move on. Stay tuned for the next blog, featuring my return to my home state!