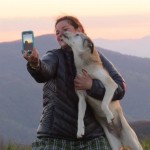 Hello New Hampshire… I thought I loved you!

Raw beauty! That is the White Mountains of NH.  Vistas, weather, AMC, rock scrambles, people, and so much more. 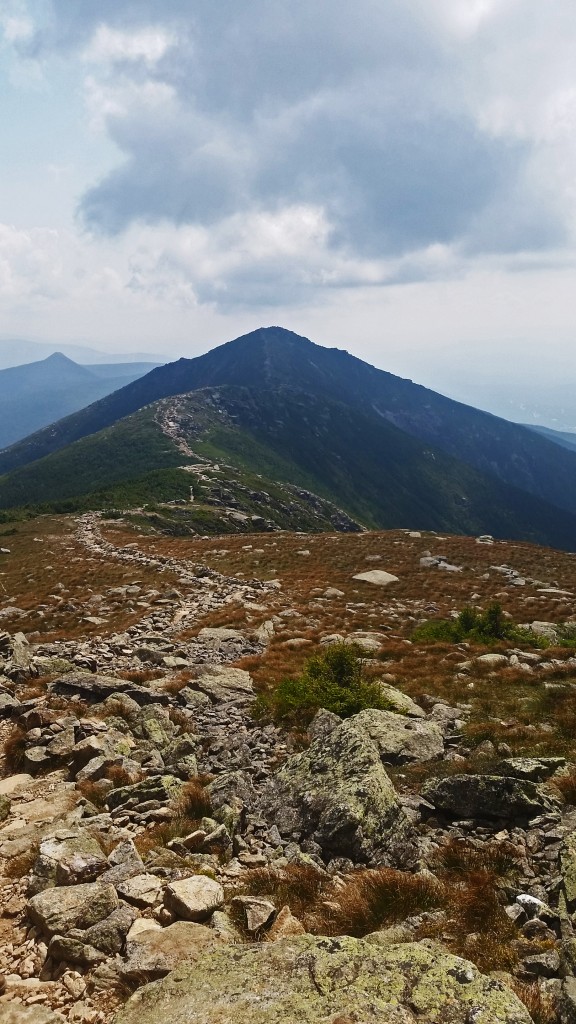 I work so hard to fill myself with joy and happiness. I want to see the best in the world surrounding me. No matter the challenges I’m handed I want to find a blessing in them. The White Mountains pushed me physically harder than any other mountain ranges or terrain we’d hiked so far. They tore me up. My knees were on fire after my first day slack packing Mt. Moosilauke. A ten mile hike without any real weight on my back should have been a reprieve but instead it was a test of my legs. We decided to hike south bound so we’d be able to see the falls as we ascended the mountain. The trail was challenging with some hand over hand rock scrambles and wooden “stairs,” which have replaced the re-bar ladders. As we neared the summit I turned around and was provided with an unobstructed view of the peaks surrounding us. For miles upon miles I could see where I was going, where I had come from, and some peaks which may make it on my list for another time. No Shame was gone, running along the trail, excited for the open space. We meandered along the trail enjoying the cairns and joining a large number of people upon the summit. The weather in the mountains is so unpredictable, one moment we were enjoying clear skies and suddenly clouds rolled in obscuring everything. Just as quickly as they’d come the clouds were gone. We enjoyed the hike down, it was a nice casual climb in comparison to our trek up.  I was excited to get off the mountain and meet up with my brother, Justin, who was providing a little trail magic by shuttling us around for the afternoon. 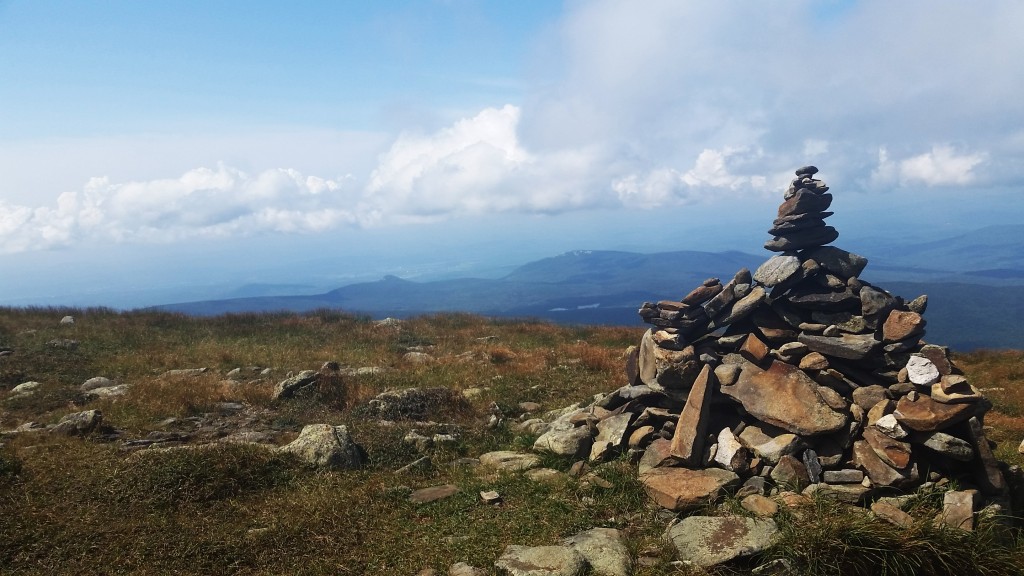 Cairn on the south side of Mt. Moosilauke summit

I made a last minute decision to slack pack the following day and avoid a heavy pack along the Kinsman range. Thank goodness because the second day of slack packing was no kinder. The Kinsman range was no joke, a 16 mile hike over a couple of summits full of boulder scrambles. This was the first section of mountain where I started to worry about No Shame and her mountain goat abilities. It was foolish of me. She bounded up the steep rocks as though she had been born on these slabs. She would stop a short distance ahead of me and whine with impatience as I tried to navigate the rocks in a somewhat graceful manner. 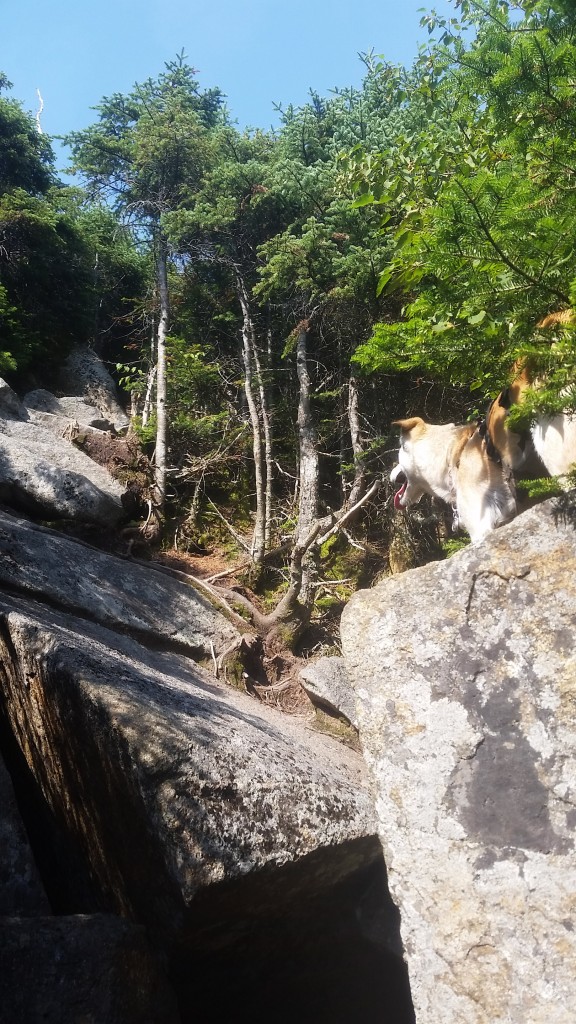 No Shame is a mountain goat in disguise!

For most of the hike you are in the “green tunnel” but when you emerged it was worth every second. Again we had a clear day and we could see for miles! I kicked back to relaxed a little at the summits but the lack of water made it difficult so No Shame and I headed down.

South Kinsman provided a spectacular view of where we’d been.

I didn’t bother pausing at the Lonesome Lake Hut, I was to tired and knew I was almost out of daylight. But Lonesome Lake… well that was a different story. I got sucked into snapping picture after picture and just standing there trying to take in all the beauty. 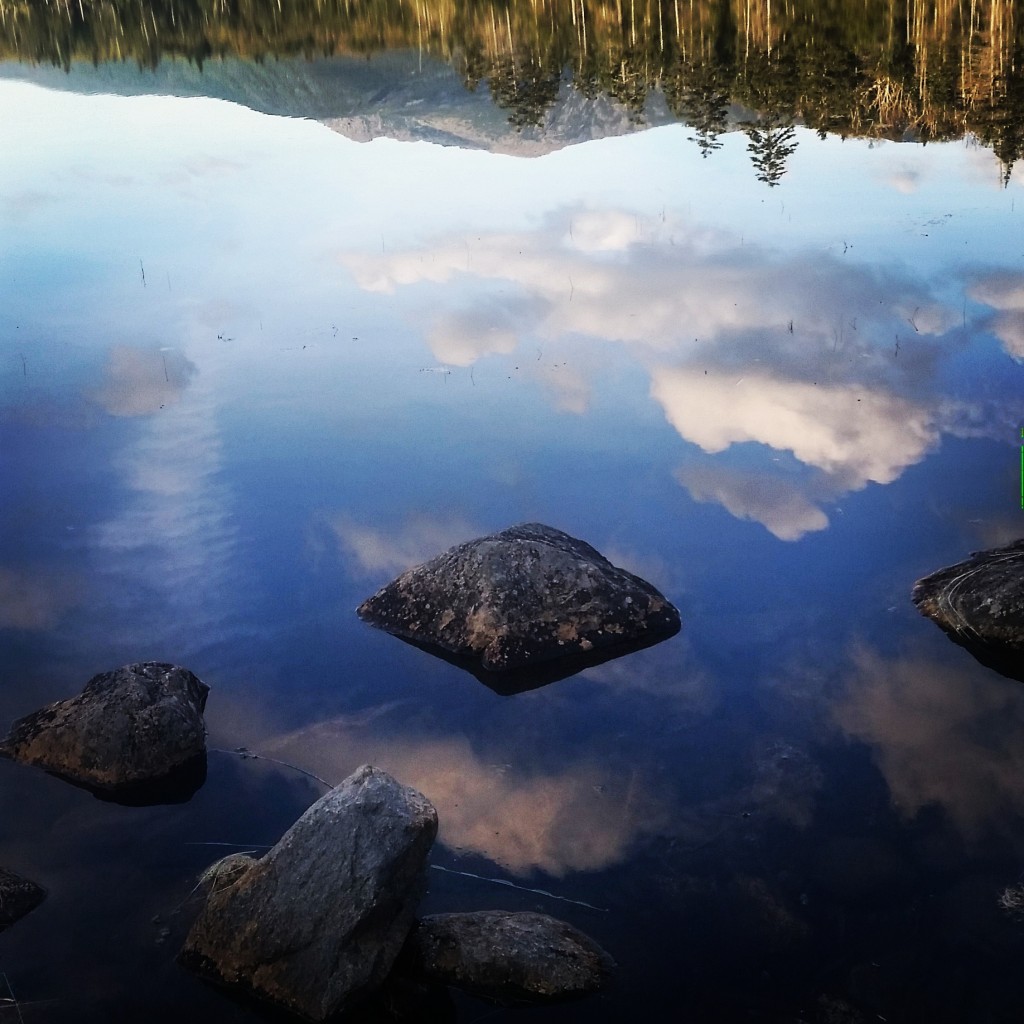 When I knew I could no longer stand there for fear of hiking out in darkness I moved along. Despite my efforts to get off trail before dark I was pushing the envelope. I was running down the final section of trail as the sun was setting, exhausted and ready to call it a day (honestly I was done 4 miles back). I ended up meeting with another hiker as I made it to the road and we decided to call a shuttle to return to the hostel, had I tried hitching it would have been a VERY long night. 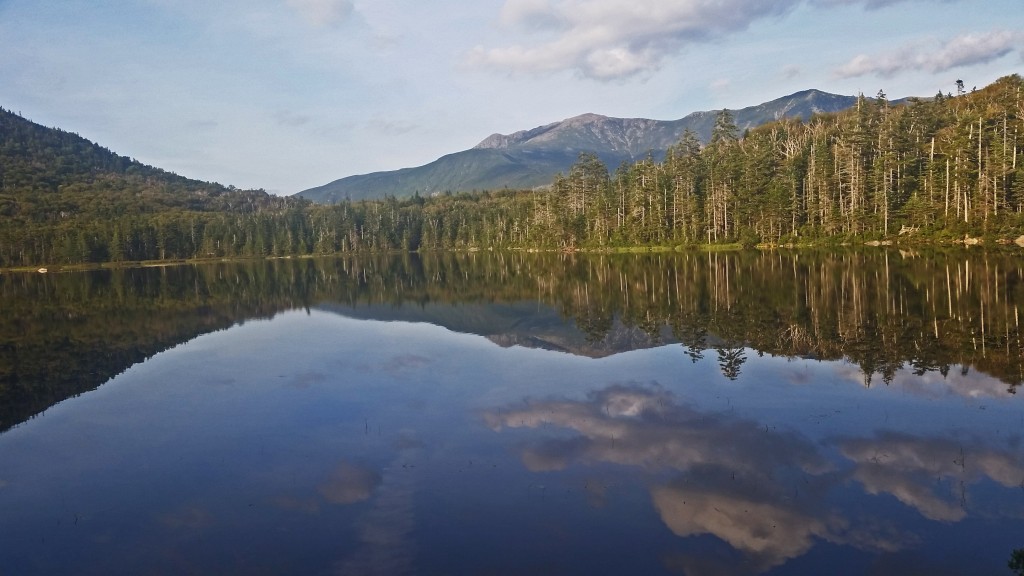 I knew these mountains would be tough, I’m from NH after all. But never in all my years of hiking had I gone up trails like these, I must have been avoiding them so I’d come back.
After pulling some bigger days we planned for a short day, we were only going to hike 5 miles to the Lakes of the Clouds AMC hut. I needed this “easy” day more than I knew.
The weather was Perfect! We arrived at the hut early in the day with hopes to kickback and relax. We were denied that opportunity. We were told the AMC could not accept any thru hikers until later in the day but they informed us of a stealth spot just up the way. I was fine with “stealthing” it still gave us a place to stay on a beautiful mountain without having to hike an additional 8 miles. We relaxed by the hut letting my knees rest and enjoying the view. Many of the day hikers were curious about our journey, especially how having a dog on the trail impacted our journey. I enjoyed sharing my experiences with them and giving them a perspective from the trail which was different from a day trip. 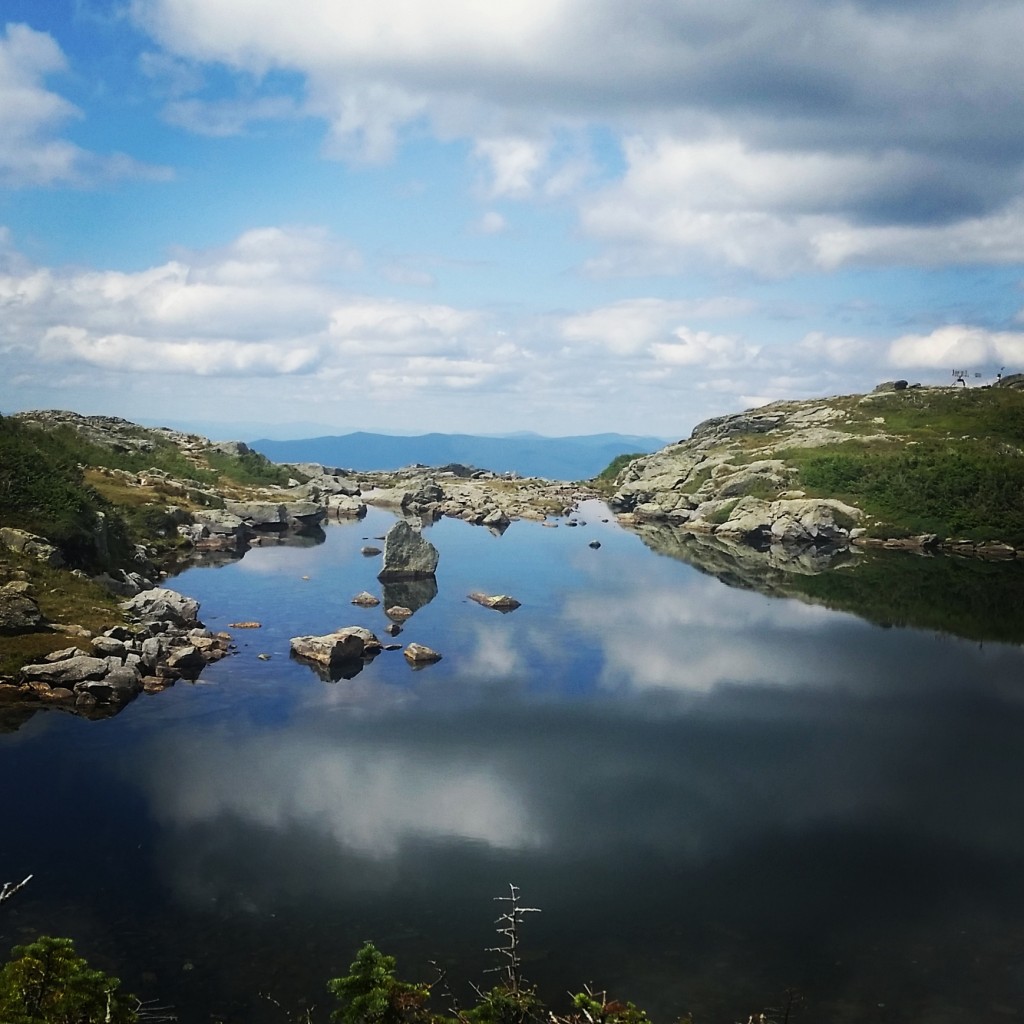 Lake just above Lakes of the Clouds Hut

We than went looking for the stealth spot but couldn’t locate the site. When we returned after walking a mile with full packs over rugged terrain I was still told we weren’t allowed to stay at the hut as we had been loitering by it all day. At that point I was at my limit. There was frustration running high between my hiking partner, Scribe, and I, my knees hurt again, and I felt as though I was just being dicked around by the “Croo.” There is an emergency room, “the dungeon,”  where  thru hikers are supposed to be able to stay for $10 but it seems this is falsely advertised. Upon explaining the situation yet again I broke down in tears. I hurt, the light was going to fade soon, all I wanted was a place to sleep for the night. Another Croo member came out to speak with me and told me of another stealth spot. One he was positive existed and was willing to come and show me if for some reason we couldn’t locate it. I was game to go search it out. His directions were so concise I felt he knew what he was talking about. Scribe was not thrilled about hiking off on another “mystery” excursion to try and find a site but in my mind that was the only option we had at this point. We located the site, it was a tiny little grassy spot off the trail with a stream running along side it and a view out into the valley and of the summit of Mt. Washington. I was content. 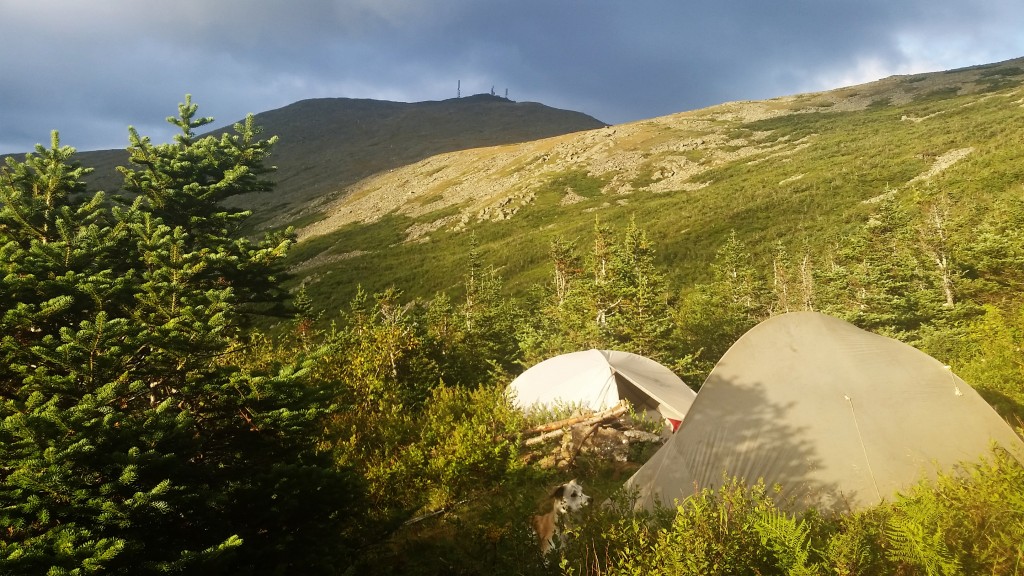 Stealth site just below Lakes of the Clouds Hut

That evening all my fears were running through my head. If my knees hurt this badly would I be able to finish the trail? Would I make it to Katahdin in time? Was I doing permanent damage? Was I just being stubborn? Was it time to hike alone? Was my hiking partner going to head off on his own as he’d said he would? I was trying my best to find the good in the day. We were camped in a beautiful location and despite the struggles to get there, we were there. It didn’t seem to matter, every time I allowed my mind to wander at all the tears took over. I had tears running down my face for hours, a silent outlet of fear, frustration, and pain.

The sun set bringing our day to an end.

The following days were no easier, the terrain was rough and pushed me to my limits. I had to slow down and take my time watching my feet intensely, often missing the beauty surrounding me. I did my best to capture it through photos. 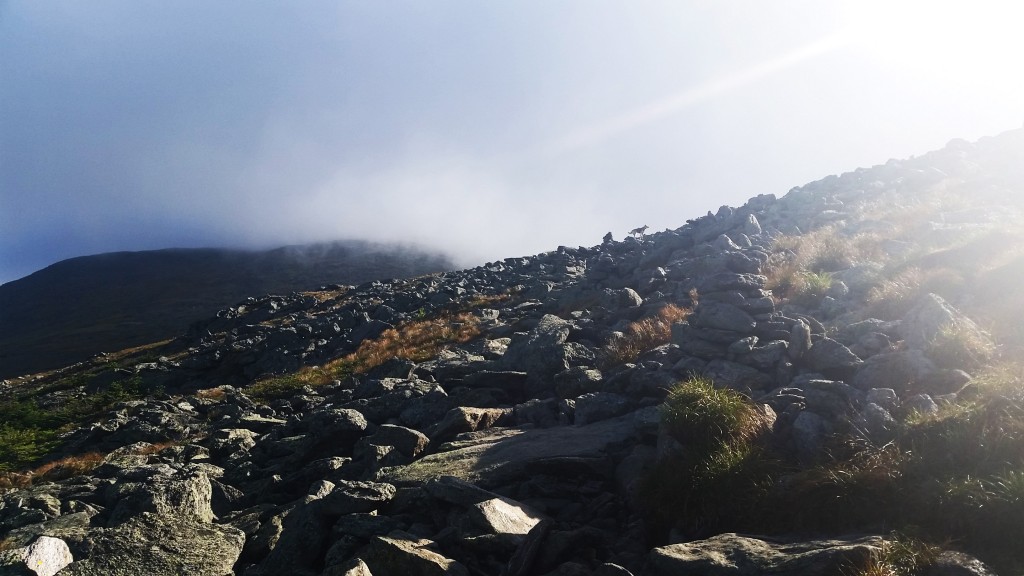 Hiking up towards Washington. No Shame is showing the way! 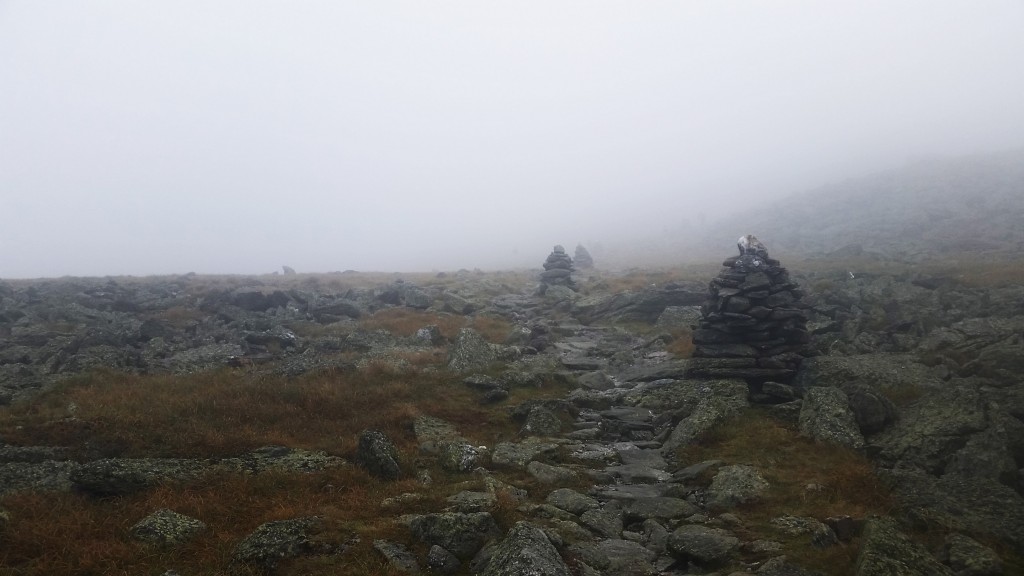 Cairns vanished into the clouds the higher up Washington you went. 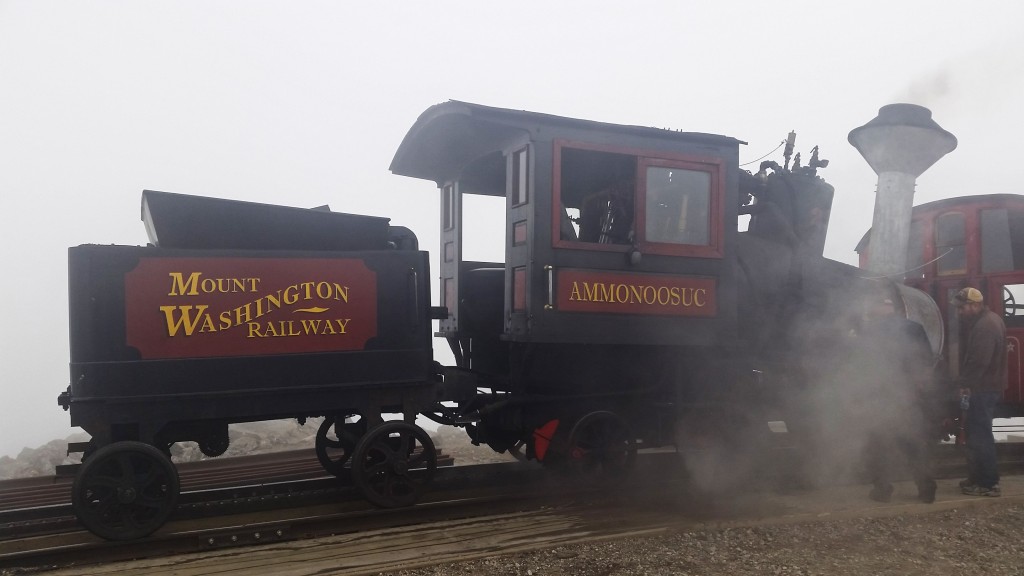 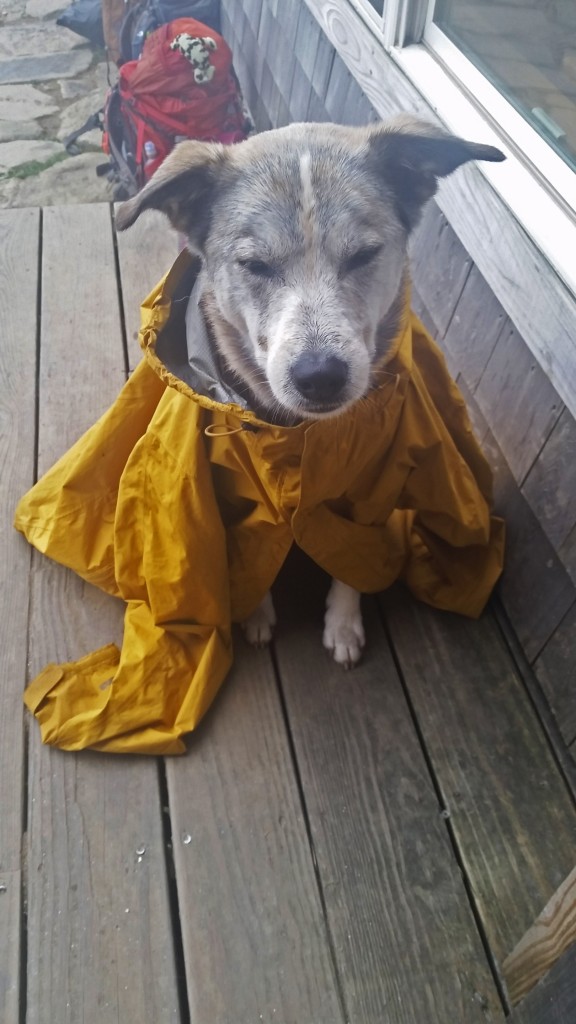 No Shame was a trooper settling in outside of Madison Hut. It was cloudy and drizzly and there was nowhere to provide protection from the weather for her. 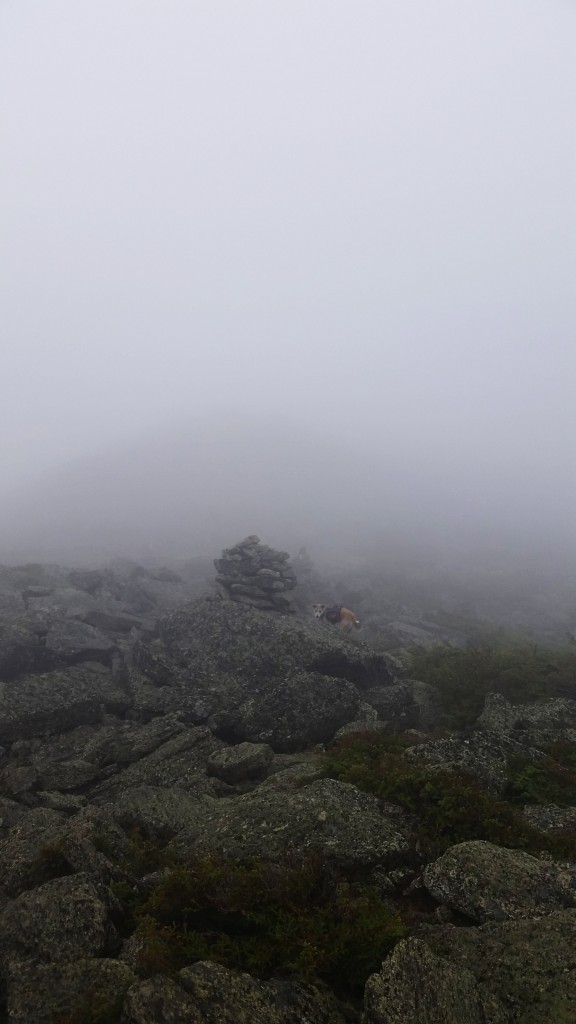 Leaving Madison Hut the weather was still keeping us in the clouds.

I knew a day off would be required to try and regain some pain free movement. I decided to take two days off while Scribe hiked on through the Wildcats. I will return for them later but my knees needed the break.

Hello! I completed my thru hike in 2015 with my dog, No Shame. We had an amazing journey full of ups and downs, seems that is the nature of the AT. Throughout our hike we shared our stories and now off trail I am still embedded in trail life. Currently I am planning my next long distance hike for No Shame and I.