Hiking the Appalachian Trail is a Pilgrimage

Long distance hiking can be plausibly understood and experienced as a sport, but readers will detect as a reoccurring theme in my writing, an emphasis on the long walk as pilgrimage. Sporting culture, with its emphases on competition and achievement, the quantifiable and the commercial, thrives in American society. But a pilgrim culture, a spiritual embrace of ascetic poverty and the journey to sacred space is (at best) nascent in weird local subcultures in America. Sport and pilgrimage need not be mutually exclusive to one another, but viewing hiking on the Appalachian Trail through the lens of pilgrimage may help an intrepid foot traveler continue forward when the games of sport quit being fun. So much of hiking in the muck and cold and hot buggy mugginess is not fun. So why do it? “Pilgrimage!” I say.

As a matter of (sub) consciousness, I began planning my 2011 thru hike long before I was aware of it. Hiking the Appalachian Trail had only been something that sounded attractive. However I was reading Chinese poets in English translation like Li Bai and Han Shan, Taoist philosopher like Laotse and Chuangtse, and discovering Chinese mythological figures like the Seven Sages of the Bamboo Grove. The image of the Taoist hermit and the Buddhist pilgrim pervades the rich texture of pre-Maoist Chinese tradition. Google image searches yielded ink on silk masterpieces like Ju Ran’s “Seeking the Dao in the Autumn Mountains” from Song Dynasty (960 CE to 1127 CE) China. Weekend camping in southern Indiana, I was staring at an autumn hill in full flaming foliage when I felt the same feeling in my chest I had looking at Taoist paintings. I thought, “I should hike the Appalachian Trail.”

The longing for the sacred grove runs deep in our species. From the perspective of evolutionary science, our species began as tree dwellers in a biological Eden in East Africa. The motif of the sacred tree runs through numerous cultural mythologies. The Christmas tree itself is a remnant of Germanic pagan reverence for the forest. Plato’s Academy in Ancient Greece first met in an olive grove. Christ had his Temptation in the Wilderness and his night in Gethsemane. Over a century ago, the American President Theodore Roosevelt and conservationist John Muir camped together in Yosemite, far away from bureaucrats and reporters, because nature is the best place to think, to pray and to grow. Rugged mountains and wild forests are to minds scientific, spiritual or secular, sacred space worthy of pilgrimage.

For the northbound (NOBO) pilgrim, Katahdin offers a truly awesome final destination. For thousands of miles it is something dreamed about, discussed and finally spied from various distances. In Native mythology, it is home to a moose headed thunder god, Pamola, the mountain frequently obscured by clouds of that Spirit’s metaphorical pipe smoke. In the local Native tradition, Katahdin literally is a sacred space, a Sistine Chapel or Dome of the Rock wrought in solid granite, solitary and looming ominously. For the south bounder (SOBO), Blood Mountain in Georgia is steeped in its own ancient lore, including the Nunnehi, immortal beings from Cherokee mythology who guide lost hunters home. If you’ve ever run into a SOBO thru hiker still on the trail in February in Georgia, you know what kind of people the Nunnehi interact with.

The morning before I hiked up Blood Mountain I met a white haired old section hiker named Merlin who suggested the Holy Grail was located somewhere along the AT. He said hiking makes you age backward. “I figure to be twelve years old when I finish this trip,” he told me. I had only been NOBO on the AT a few days. It was a cold, sunny morning and Merlin’s casual remarks during a brief on trail chat sunk deep into me. The Appalachian Trail really is a magic forest, and if you spend enough time walking through it magical things will happen to you. I can not fully relate altered states of consciousness (the result of endorphins released by extreme exertion) I’ve experienced hiking up mountains, but I am sure any faithful pilgrim hiking that path will experience his or her own illuminations and visions.

The English poet, Geoffrey Chaucer, in the Prologue to his poetic masterpiece “The Canterbury Tales” wrote in Middle English:

The droghte of March hath perced to the roote

Translated into Modern English it reads as follows:

When April with his showers sweet with fruit

The drought of March has pierced unto the root

Then do folk long to go on pilgrimage,

And palmers to go out seeking strange strands,

Hiking the Appalachian Trail is a true American pilgrimage, complete with its own shrines, both natural and human made. Katahdin, Mount Washington, Stratton Mountan, Mount Greylock, Mount Rogers, Roan High Knob, Clingman’s Dome, Max Patch Mountain, Albert Mountain, Blood Mountain: these are sacred places; shrines of nature. The observatories and towers along the trail are shrines; so are the little cemeteries of old mountain homesteaders; so is the path of the trail itself, following and shadowing one route of the Underground Railroad; Robert E. Lee’s invasion route to Maryland and Pennsylvania; Harper’s Ferry. In New York I spent an afternoon sitting beside the bronze statue of the  poet Walt Whitman on the AT in the (otherwise wretched) Bear Mountain Zoo. Whitman, a practitioner of Ralph Waldo Emerson’s American Transcendentalism, as a statue is posed with heroic gate beside an excerpt of “Song of the Open Road.” In Maine, I noted how another Emerson disciple, Henry David Thoreau, gave his name to a spring on Katahdin, which he summited in the 1840s and wrote about in his book The Maine Woods.

If you are a pilgrim who undertakes a sacred journey on the Appalachian Trail, you can never truly “quit” hiking the Trail. The experience will be with you for the rest of your life. If you finished it or if you didn’t or if you wish you could hike on it again, the Trail will command your reverence at mere mention. Whether you are of a Franciscan or Wesleyan orientation, an atheist or a Theist, Left or Right of political center, from anywhere, born of anybody, undertaking to hike the Appalachian Trail is a genuinely transformational pilgrimage. You might end up dead or with a broken leg, but much more likely, you may find a sustaining peace within yourself. And hiker stench. Holy hiker stench. 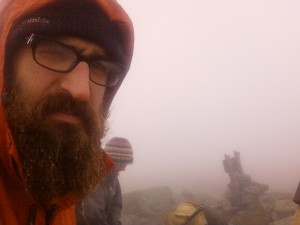 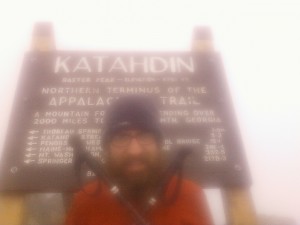 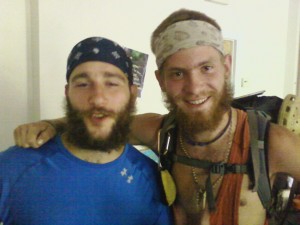 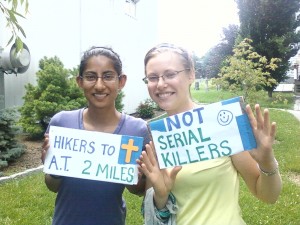 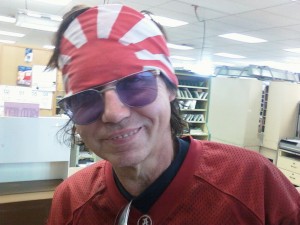