Day 28, 3/25: Hot Springs, NC -> Spring Mountain shelter (11 miles)
I stayed up way too late organizing my food and gear. This was the first big organizing I’ve done since starting so it took a while. I got rid of the severe cold weather gear I got for the Smokies blizzard except for my synthetic puffy jacket, so my load should be significantly lighter. When I finally turned in, it felt like I had just closed my eyes before it was time to get up. We had a tight schedule of packing up, breakfast, and meeting the shuttle driver, so we didn’t have a lot of wiggle room.

Breakfast was amazing. It was all homemade: biscuits with honey butter, bacon, frittata, grits, homemade granola, and fresh fruit. We ate as quickly as possible and got on the road to meet the shuttle driver. Driving out of Hot Springs we saw Captain starting his hike and waved.

The road driving there was windy and made me carsick. After not being in a vehicle for a while, everything seemed to be moving fast and reminded me of the Millennium Falcon in Star Wars. We finally got to the small gravel parking area at Devil’s Fork Gap near a farm. I stepped out to get some air, and inhaled the smell of a dead animal which didn’t help the nausea. Luckily our shuttle driver was already there, so we loaded up our packs and got in the van with another couple.

The other couple was doing a small section hike. When they found out I’m thru hiking, I answered the normal questions of start date, things I liked about the trail, dislikes, etc. I normally love talking about the trail, but I was still feeling carsick so I was trying to look out the front window.

We got back to Hot Springs and went into the outfitter to pay our shuttle fee. While in there, we looked around, and I found an awesome white blaze ballcap to buy. Outside the store getting ready to start our hike, we ran into Rash, Pinata, JAM, and the 4 college kids we saw at Groundhog shelter. I was excited for Louis to meet some of my hiking friends, so we stayed to talk for a few minutes before heading out. On the bridge before the trail we ran into Dirtbag, Rockhound, and Dancing Bear, and down by the river camping we found Beeline. 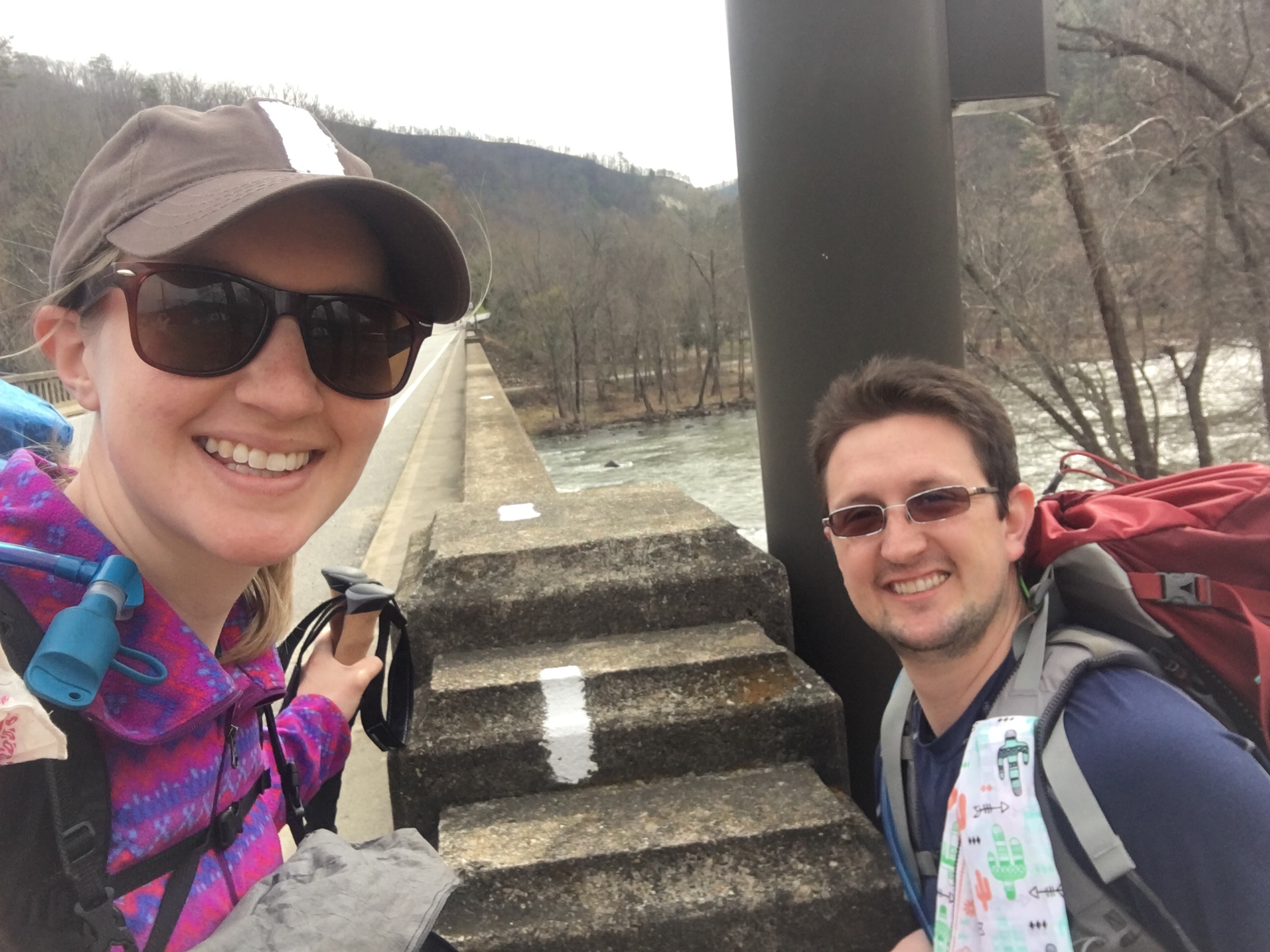 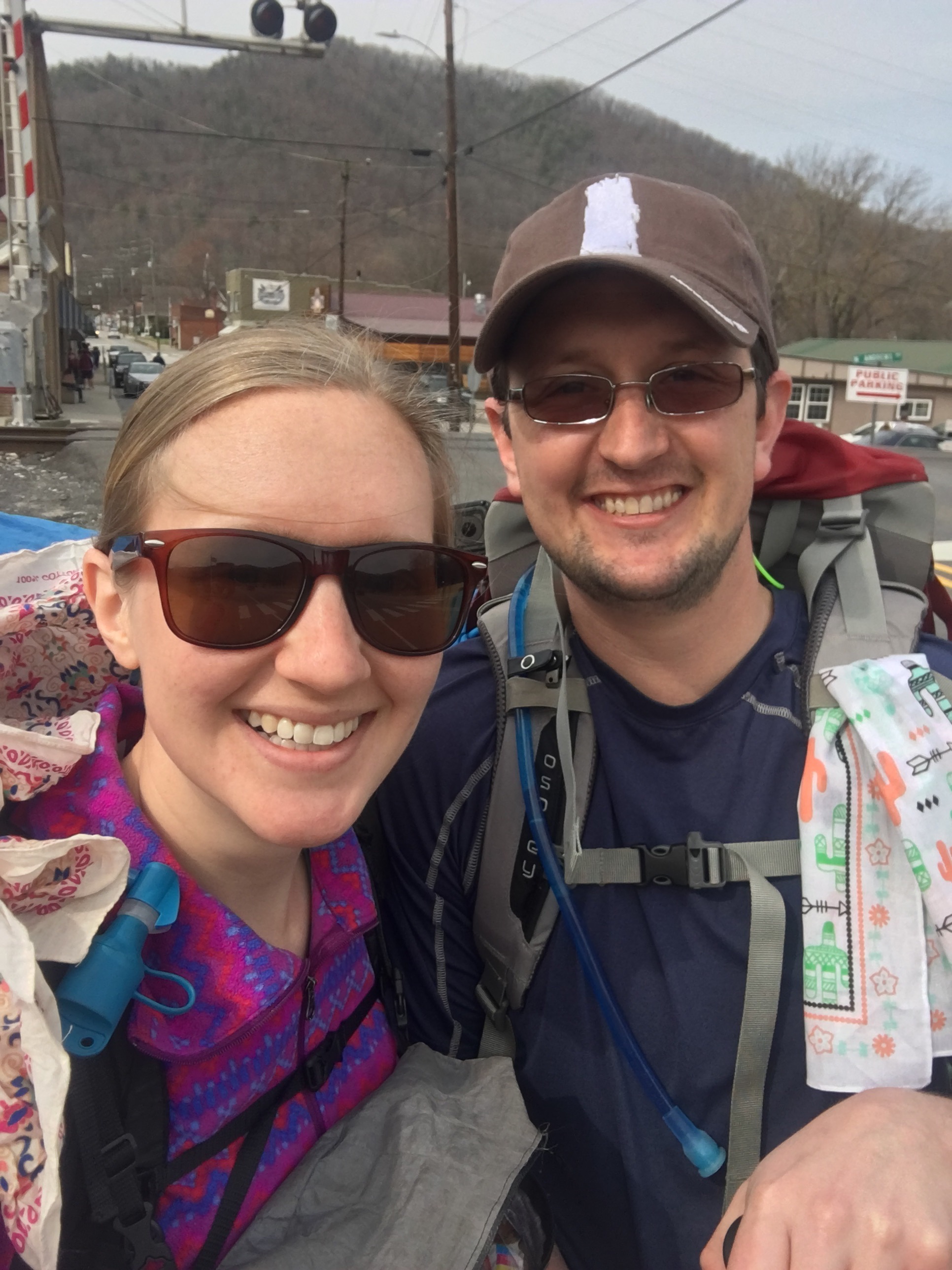 Me and Louis leaving Hot Springs

The beginning of the trail out of Hot Springs was a very steep and rocky climb. I felt so much lighter carrying only 2 days of food and without my winter gear, so I was floating up the mountain. Louis lagged a bit on the climbs but was making up for it on the flat parts. We stopped halfway up the mountain and took off some layers and enjoyed the view of Hot Springs. 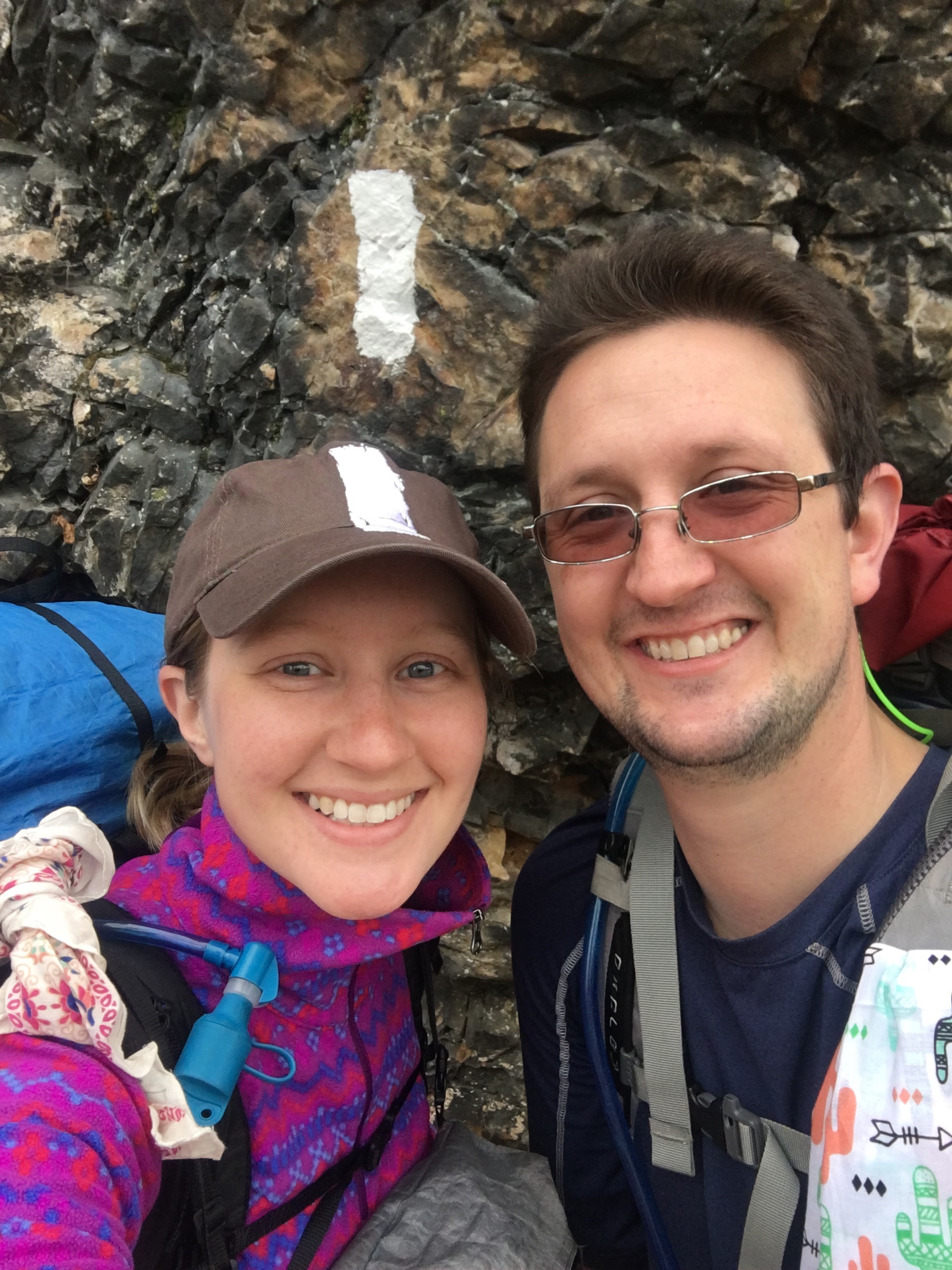 At the bottom of the climb out of Hot Springs

Even though we were only going 11 miles, we got a late start, and the terrain was a lot of climbing. Louis was not a fan. He kept asking to check Guthook’s app to see where we were, and I tried convincing him to just enjoy the hike. I felt like I was looking at an earlier version of myself when I used to obsessively checked the maps for my location. I’ve since realized that it doesn’t matter how many more miles or the elevation you have left, you still have to hike it, so it’s easier just to try and enjoy the hike. 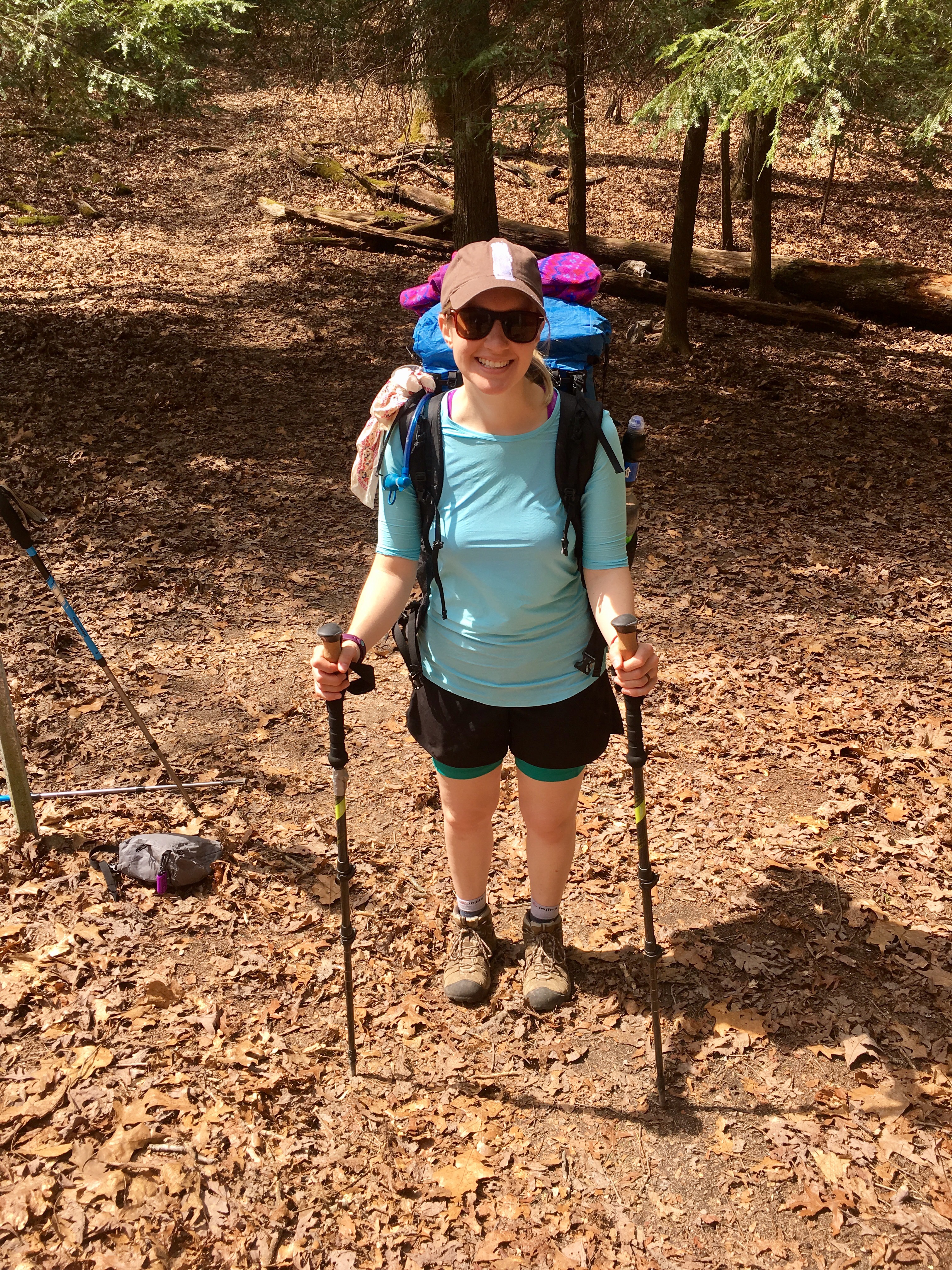 We finally arrived at the shelter around 5:30 ready to pitch the tent, and happily found Captain and Sitting Bull with space in the shelter for us. There was another girl in the shelter, Sarah, who was taking a zero tomorrow. By the time we set up our sleeping areas, cooked dinner, and fetched water, it was getting dark. We settled in to get sleep for our long 16-mile day tomorrow.
Day 29, 3/26: Spring Mountain shelter -> Jerry Cabin shelter (15.9 miles)

Louis woke up early and packed his stuff up in record time, while I slowly stuffed my sleeping bag away. If he were a thru hiker he’d definitely be first one out of the shelters in the morning. We ate a snack and got on the trail. We had some big miles to cover and my feet and knees were sore. I didn’t zero in Hot Springs with my friends and I was feeling it. I took Ibuprofen for the first time in weeks. Rain was in the forecast and it was drizzly when we started, so we donned our rain gear. 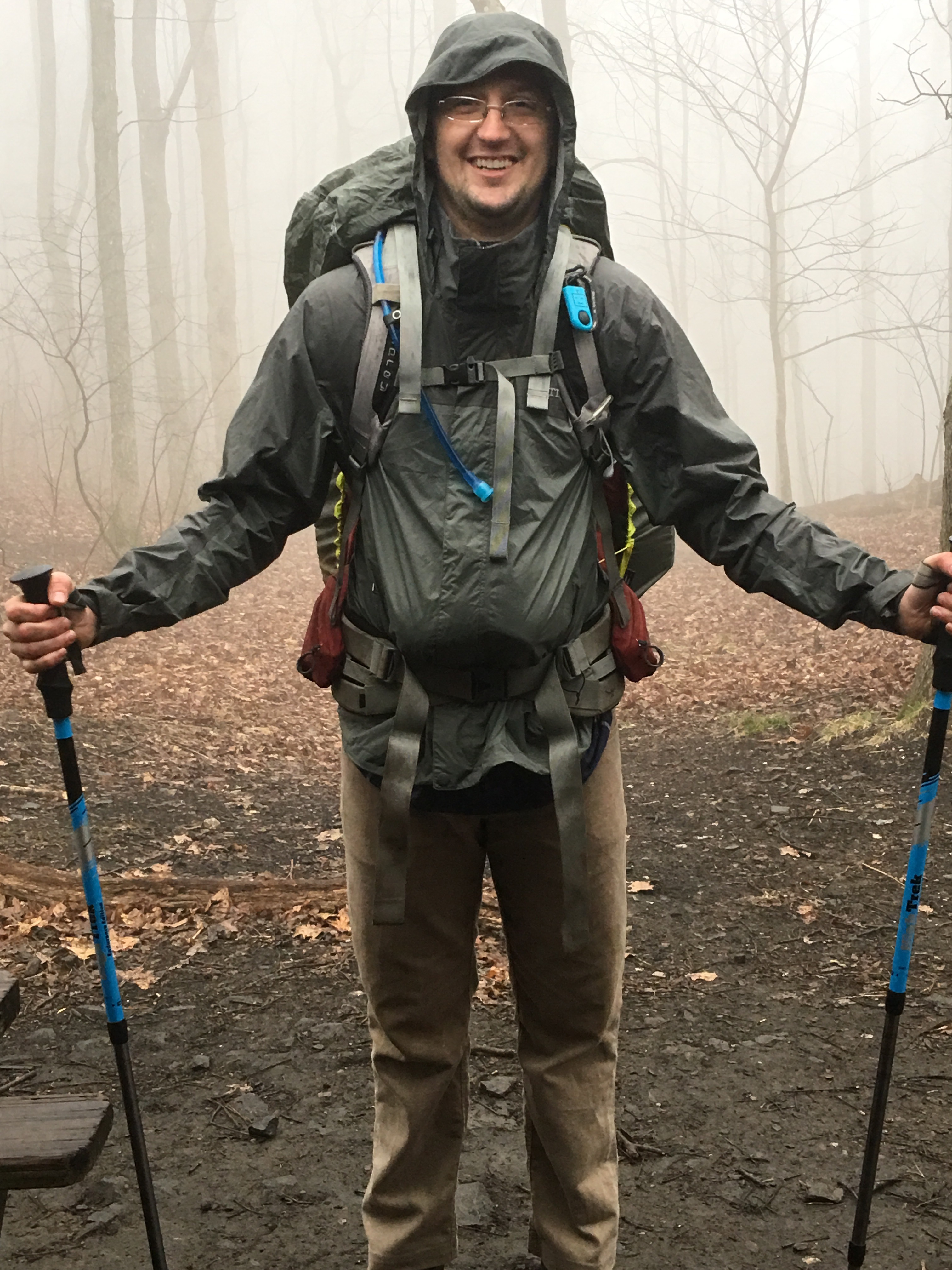 The day crawled by. Louis and I both had sore feet, and it seemed like every part of the trail was covered in roots and rocks. We tried to make the best of it and sang songs together (mostly Disney songs), which made the time pass. 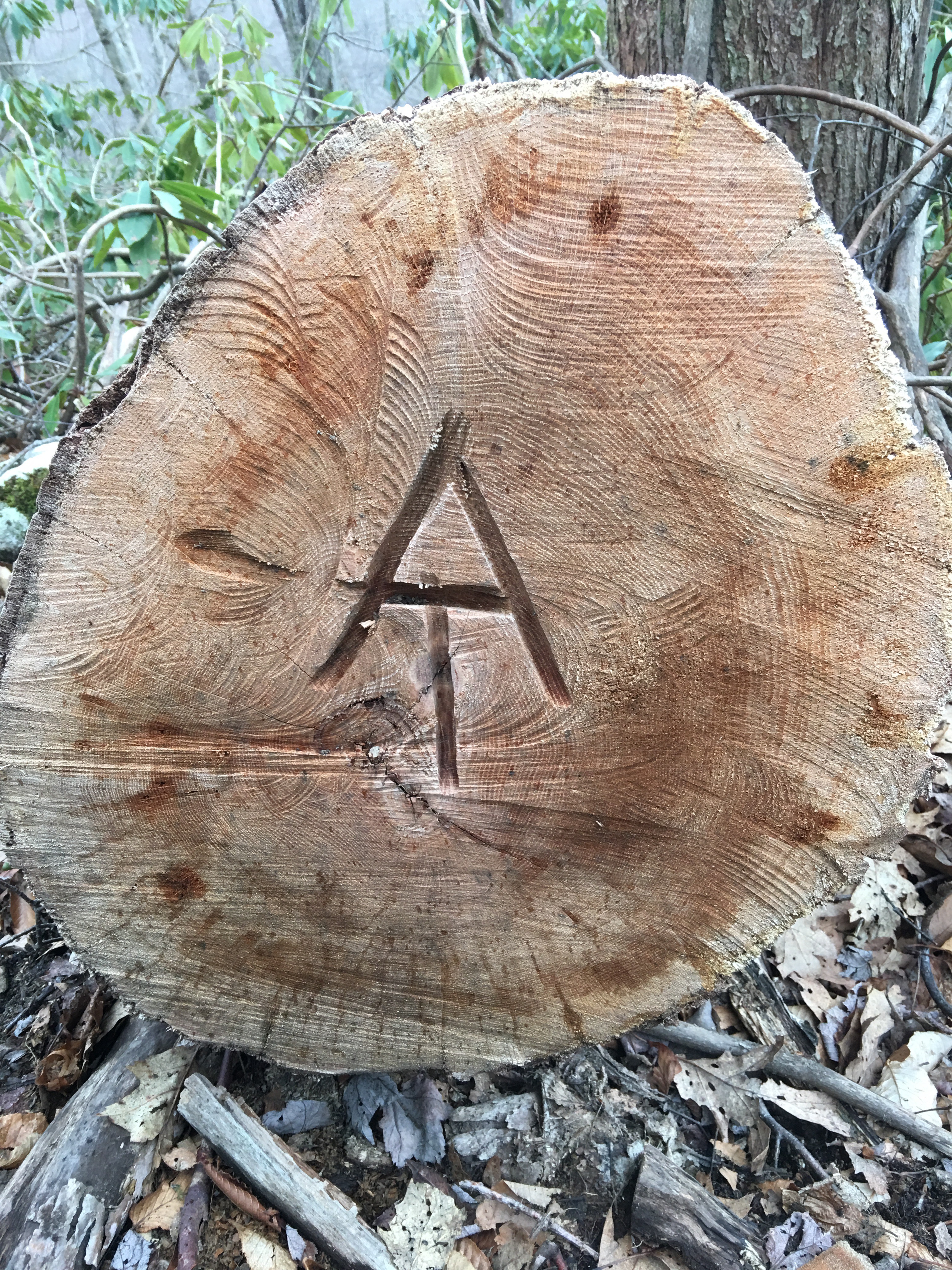 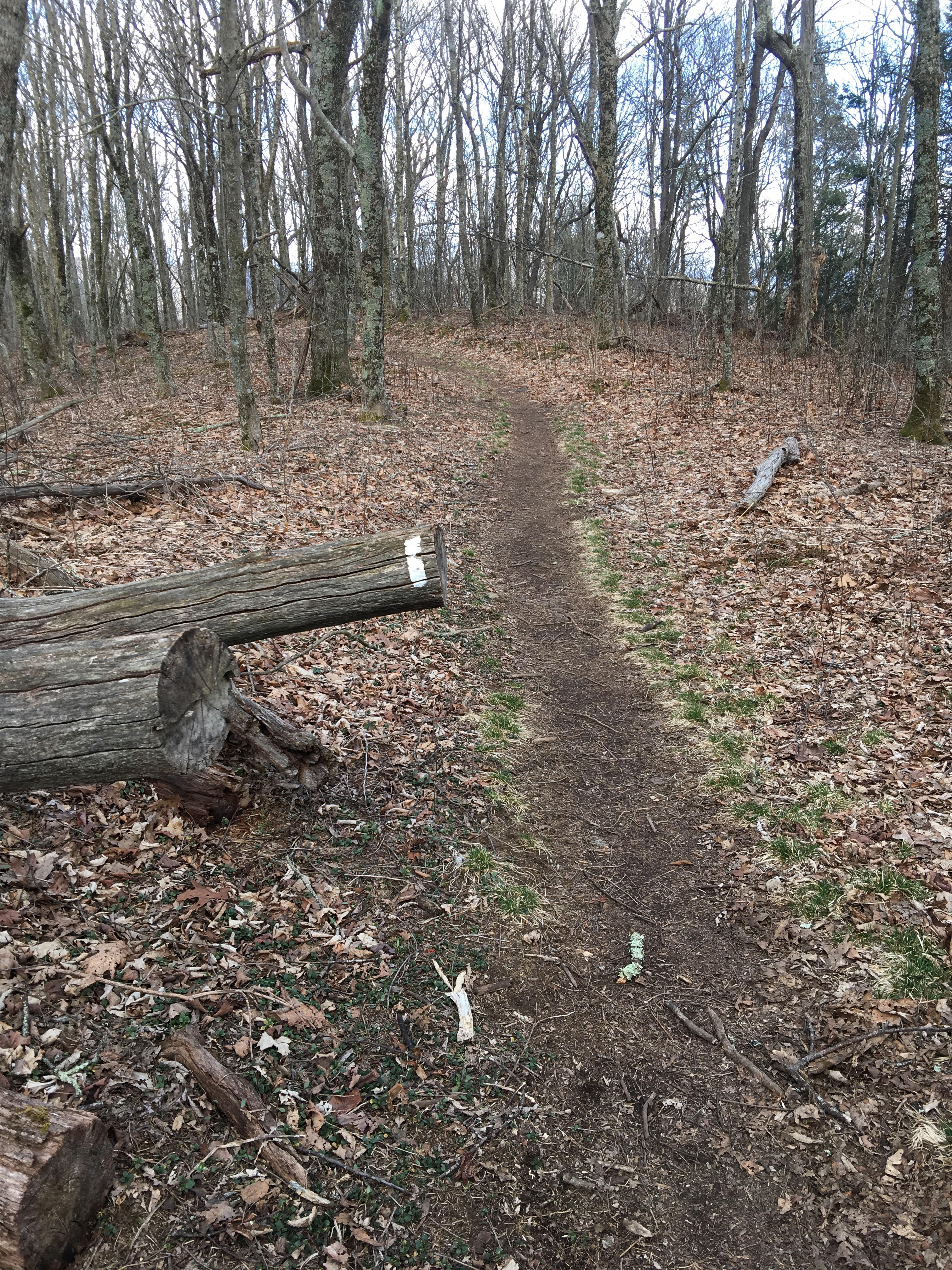 The weather called for possible thunderstorms, but most of the day was beautiful and sunny. Then the last 6-7 miles, the sky darkened and the wind picked up. I got nervous. We were at a pretty high elevation in rocky terrain, and I didn’t want to be caught in a thunderstorm with nowhere to throw up the tent if we needed an escape. I tried to pick up the pace, but the sole of one of Louis’s hiking boots started coming off. We rigged it to stay put with his shoelace but picking up the pace wasn’t an option. 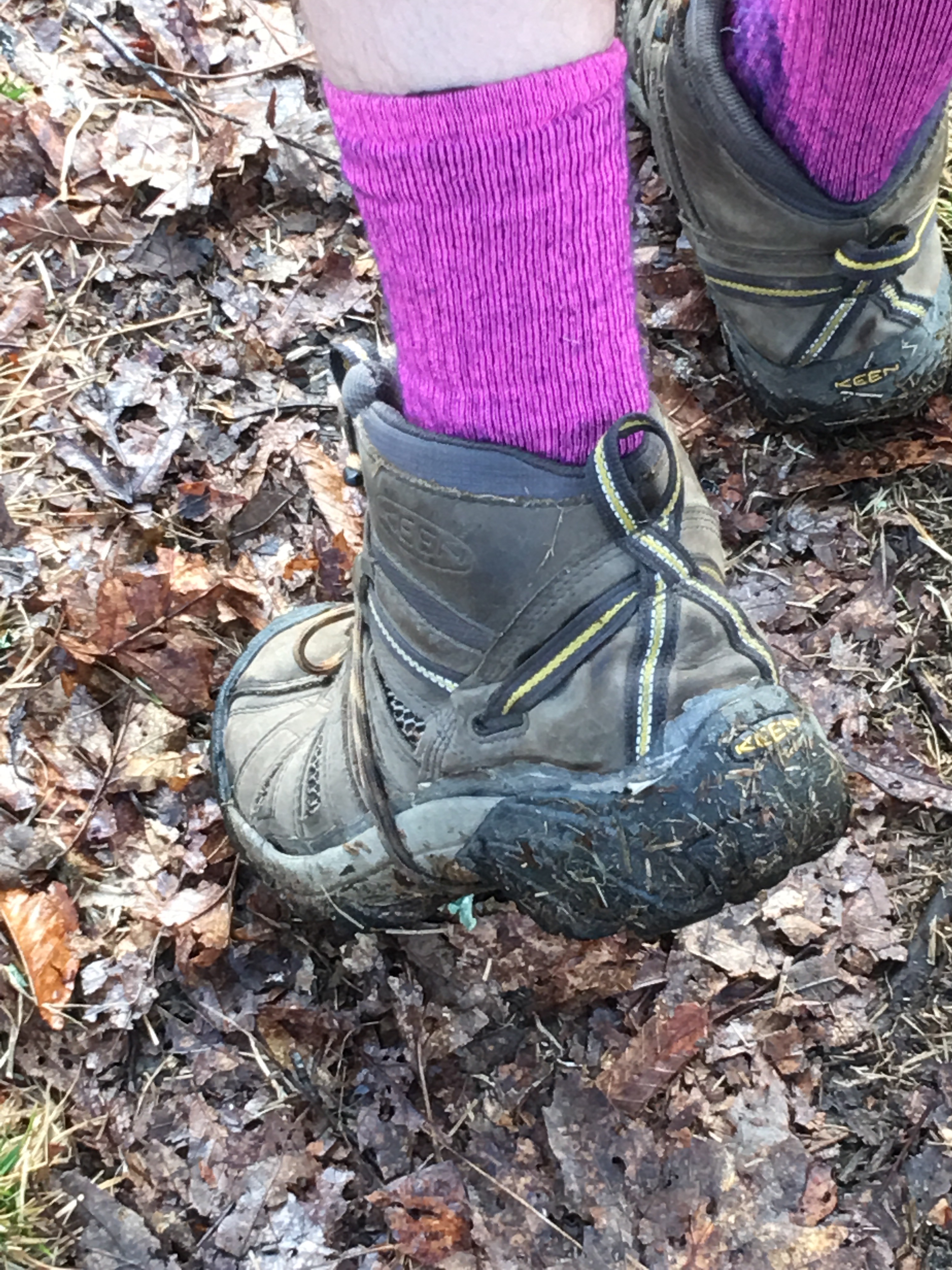 It started lightly raining and the wind was blowing. We came to a fork in the road with a “bad weather” blue blazed trail that paralleled the AT for 1.5 miles, and the real AT that went over rocky terrain. The blue blaze used to be the old AT before it was rerouted. We decided not to risk it with the thunderstorms closing in and took the blue blaze trail. I felt a little guilty for missing those white blazes, but I remember Engine telling me that he and Caboose never put miles above safety, and I didn’t feel safe taking the more treacherous route with the weather. 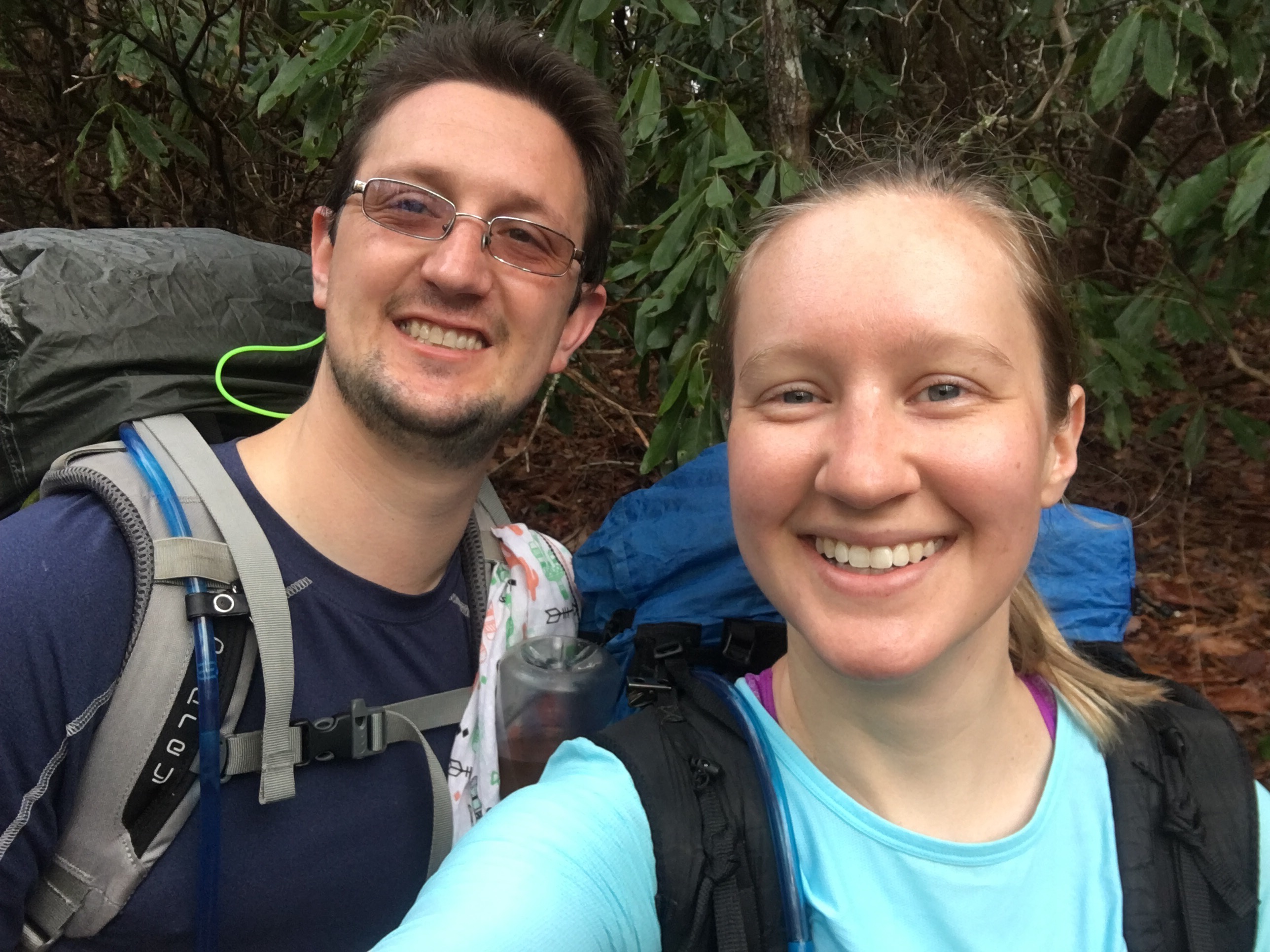 The impending thunderstorms never came. We finished the trail with a bit of rain but thankfully no huge thunderclaps. Arriving at the shelter we found Beetle and Friendly Ghost! Unfortunately, Beetle developed shin splints so they were taking it slow. Another hiker I hadn’t met before, Dogmouse, also had shin splints. We set up in the shelter and Captain came along, taking the last spot.
While making dinner it started pouring down rain but it was still sunny. Everyone moved inside, but the rain was brief. In its place was a huge beautiful rainbow. You could see each end of the arc and make out the individual colors. It was a great treat to end a hard day. 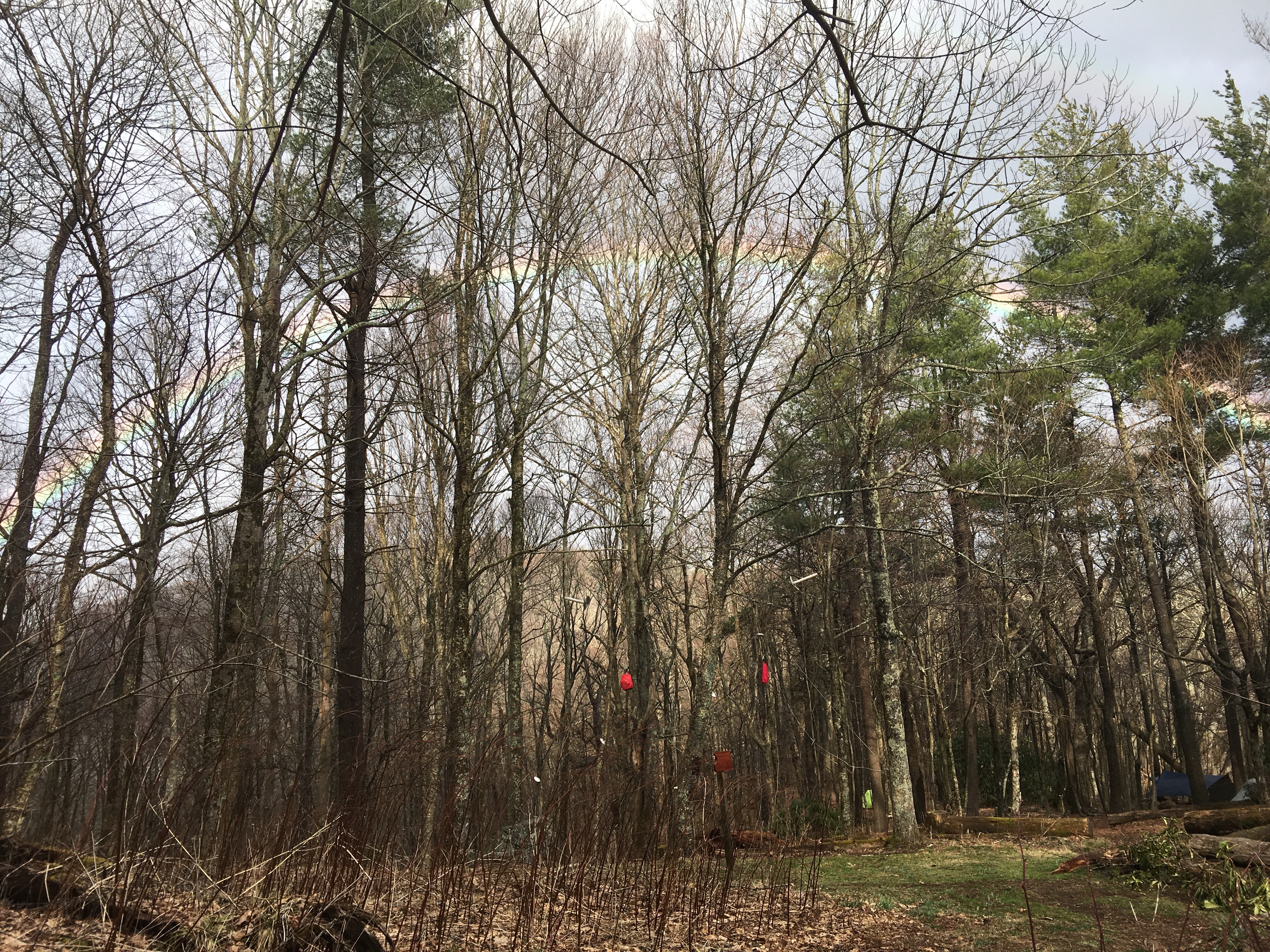 We woke up and like yesterday, Louis was packed up in mere minutes. I tried hurrying but I was sore all over and moving was painful. We eventually got on the trail and started the easy mostly flat 10 miles to the car. The weather was sunny and it was promising to be a warm day. 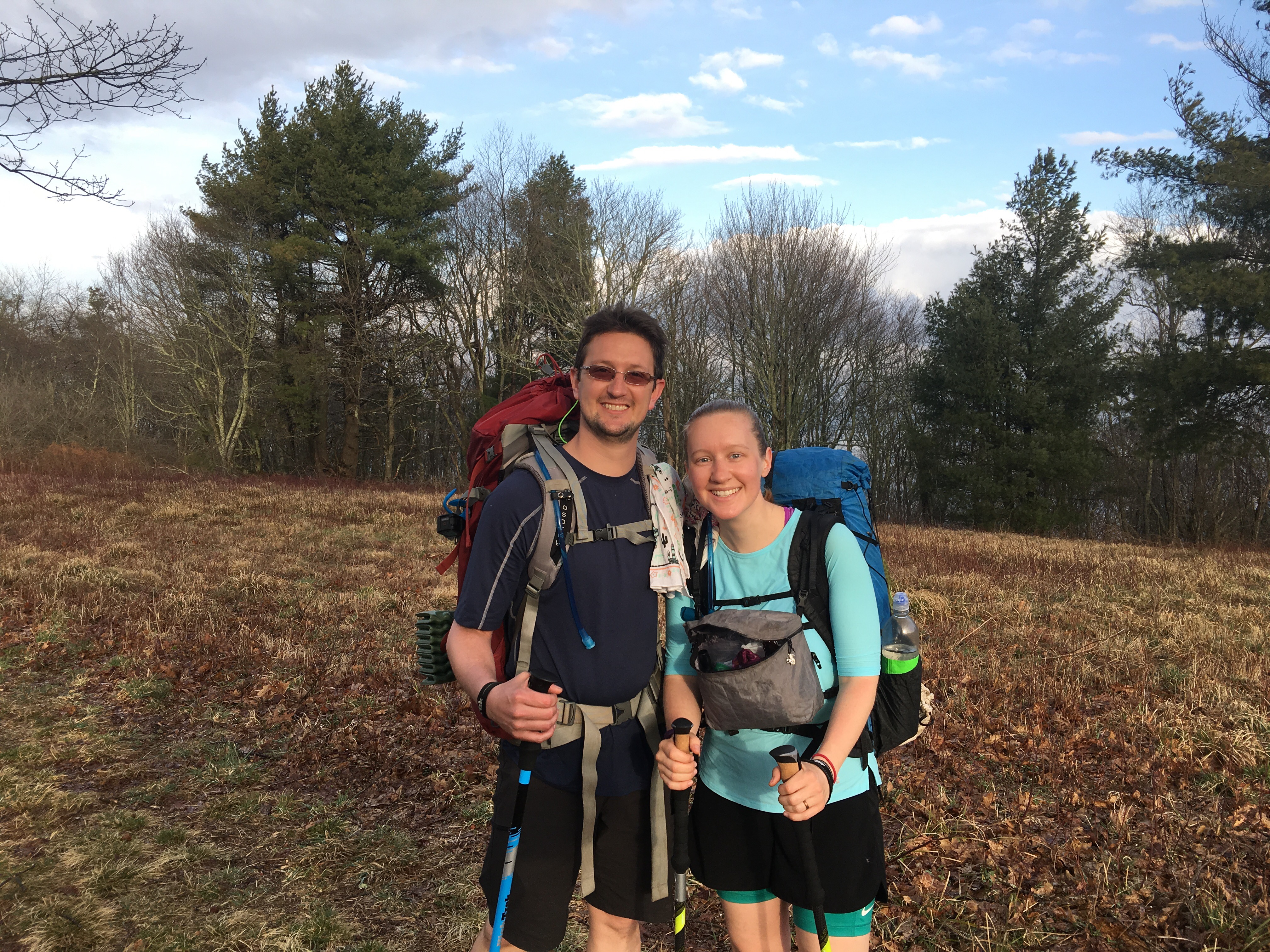 We passed Radio and Fish hanging out on a bald, and they took our picture

We climbed Big Butt Mountain and childishly sang songs about butts all the way to the top. We climbed the very slippery and dangerous side ascent to see the view, which was not spectacular and not worth almost falling to our deaths. I was very disappointed there was no sign to indicate this was Big Butt Mountain to get a picture in front of. 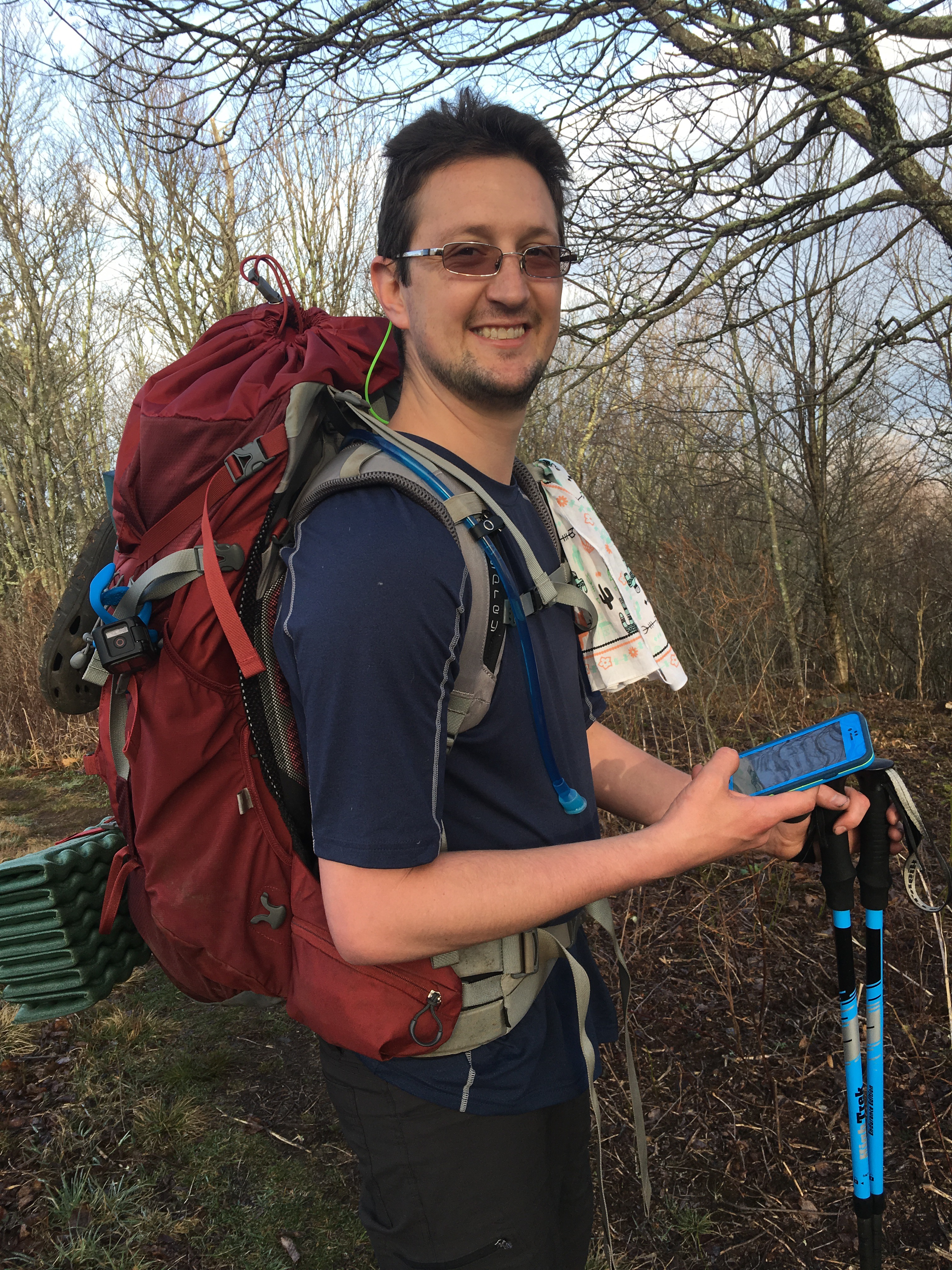 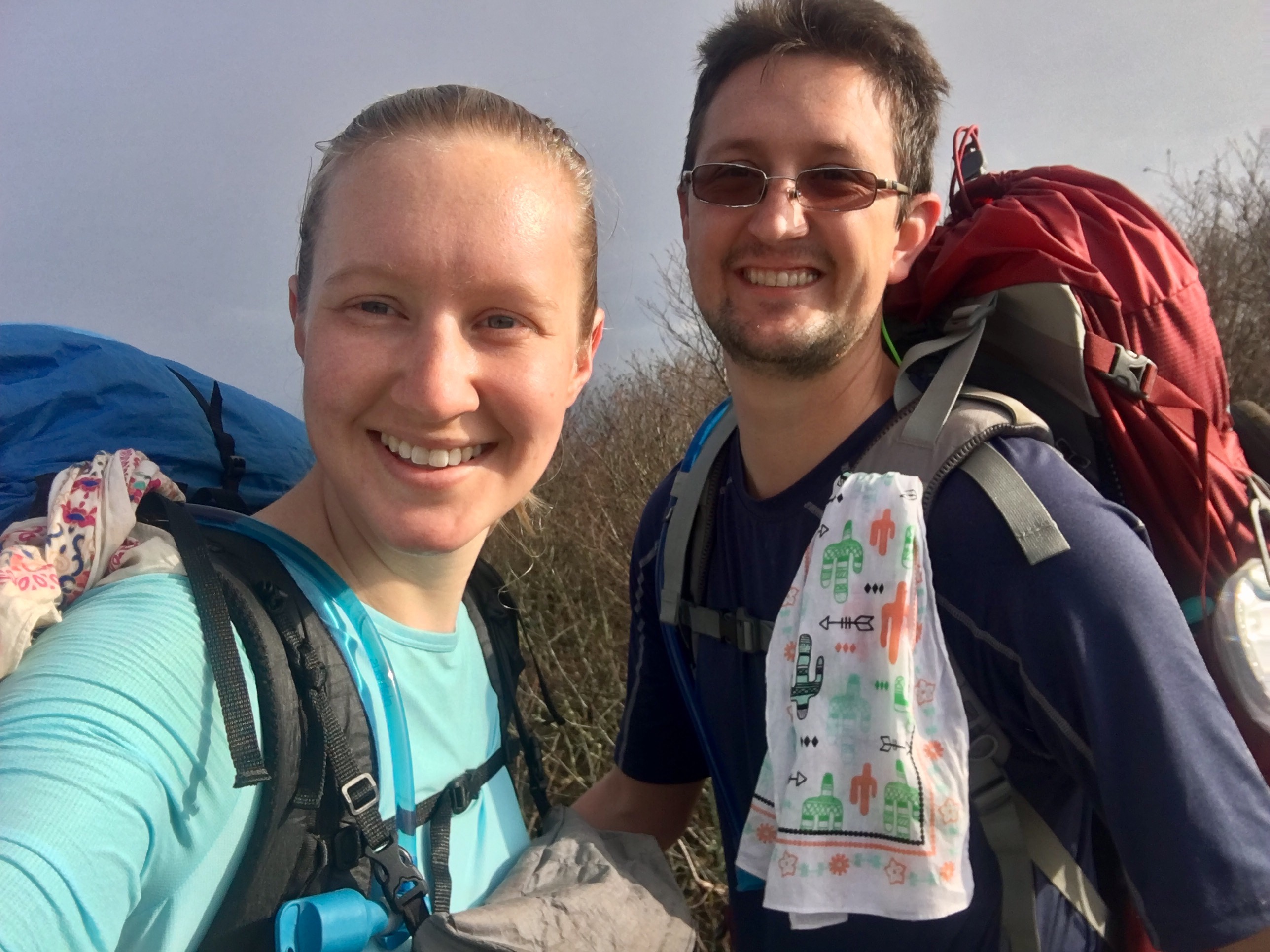 The rest of the hike went by quickly, and before we knew it, we could see the parking area through the trees. Before getting to the car, we came across a man with a highlighter yellow shirt. He offered us trail magic. He said he’s planning on doing a section in Maine this summer and he might catch us there. 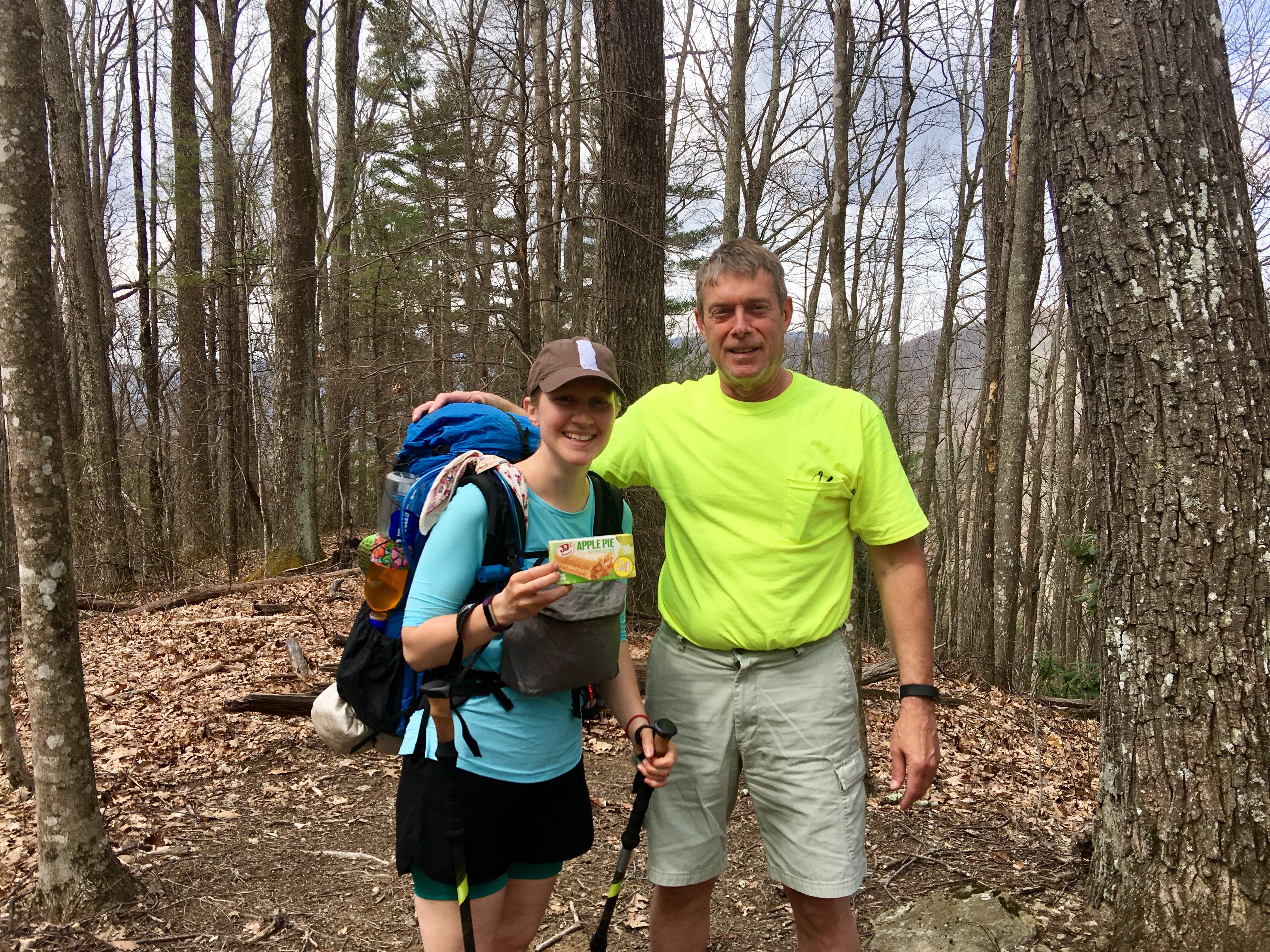 We got to the car, drove the 20 minutes to Erwin, TN and booked a room in the hotel. The room wasn’t ready so we went grocery shopping. We didn’t smell that great but we were too tired to care. We got my resupply food, a microwaveable lasagna, and some ice cream for lunch. I also got some bagels, cream cheese, and a tiny nonstick egg skillet to toast the bagels. Beeline inspired me with his amazing assortment of food. Back at the hotel food was a priority, so we shared the lasagna before showering the hiker stink off. 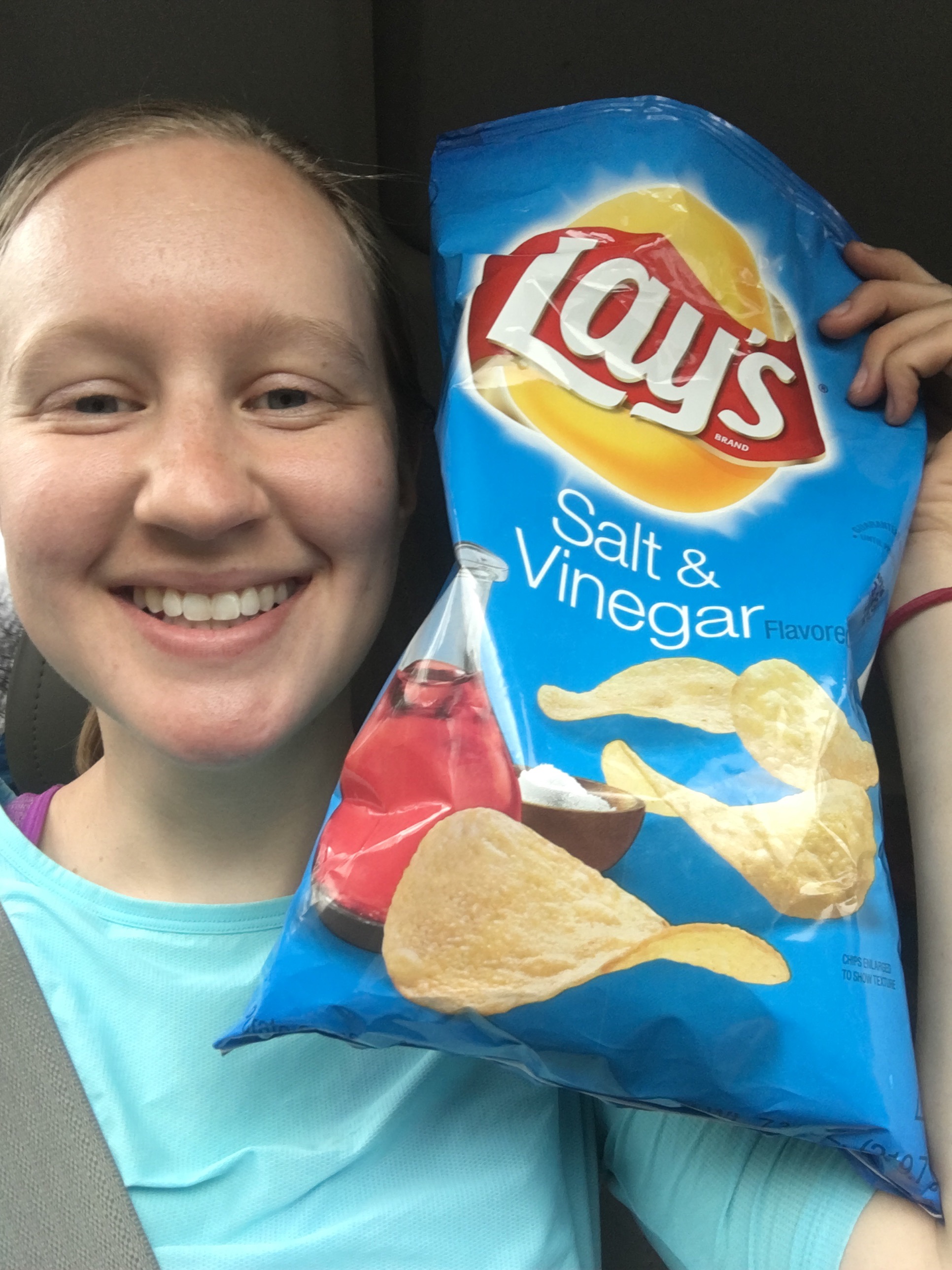 It had been intermittently sunny the past 2 days but I had mostly worn long sleeves. I put sunscreen on my face and was wearing my white blaze hat and sunglasses. I thought I was covered (literally and figuratively), but I got burned on the tops of my ears. They were peeling, painful, and hot. I won’t be making that mistake again! Sunscreened ears, here I come.
I was too tired and sore to go out for dinner, so Louis (the wonderful husband he is) got BBQ and brought it back to the room. It tasted amazing. I spent the evening on my computer filling out forms for school and downloading some new music for the trail. I stayed up way too late, but it felt good to reconnect with the world staring at a bigger screen than my phone.