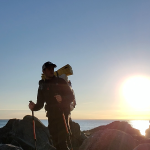 I took a trip to Shaw’s – and committed to a Thru Hike.

A goal to hike the Long Trail, A world changing disease, and a HMG Windrider that doesn’t fit quite right…

Yeah, that’s a pretty strange way to start a post about Thru-Hiking, but without those three things, I absolutely wouldn’t be doing it.

I’ve wanted to hike a Long-Distance trail for as long as I can remember. The desire arose around middle school, and continued into high school. I remember (with fondness) that during my freshman year of college, I began compiling a list of all the gear I had planned to buy and use on the Appalachian Trail – needless to say, the gear I currently own is very different.

Of course, at that time, I could have never imagined myself as a thru-hiker. 2000+ Miles? That was simply an insane feat to me. I mentally reserved such an achievement for Marathon Runners and Iron-Man Racers who could be struck by lightning and cool themselves off from it with water. As I got into college, however, and I met people like me who did Long Distance Trails, the achievement became less of an abstract and more of a possible reality. I was enthralled, with the idea, but never quite committed. I made a half-baked plan to hike the Long Trail in Vermont, and have that become my big achievement…

And then, in 2020, the funniest thing happened.

We all remember it: Disease, lockdowns, 14-day quarantines. Seemingly in a matter of weeks, my goal to become a Thru Hiker slipped away. My college coursework all became remote, I was separated from my friends and the campus, and forced to move back in with my parents.

And it made me very, very sad. The weight of all the negativity seemingly in every corner of the world really did a number on my emotional health. I was diagnosed with Major Depressive Disorder, and found myself struggling to stay afloat in every single aspect of my life. I nearly flunked out of college, I lost personal relationships that meant the world to me, and I stopped taking care of myself. I gained 30 pounds, spending seemingly every night drinking.

My life was a spiral, and I hated it.

Even when the world started to return to some semblance of normalcy, I still couldn’t shake the bad habits I had developed from the dark days of quarantine, I still couldn’t bring myself to do the things I loved, I still had the extra 30lbs, I still spent a majority of my days holed up in my room staring at the ceiling, doing the bare minimum to get by…

Sometime in May, I had absolute mental health collapse. I’d prefer not to share what caused it, but just know it was bad. Very bad.

I moved in with family in New York, to try to distance myself from the dumpster fire that my life. Still, it followed me. I ended up working as a Security Technician; working nights installing security cameras. My schedule had me working from 2:00PM to 10:00PM at night. I struggled to cope with the schedule, and the isolation from my family that came with it.

The first place I was contracted to work? Fort Montgomery, New York.

That’s right, that little town right next to the Bear Mountain Bridge.

At first, I hated working so close to the Appalachian Trail. It was a reminder of my life when I actually had my act together. But as time went on, the trail came to grow on me again. Maybe it was the flickers of some little fire from my former self, steering me in some given direction. This fire gained traction and grew the harder I worked, the more Hyperlite packs I saw passing through the town on my lunch breaks. With every pound I lost, I saw myself moving towards the person I wanted to be again.

I cut out all alcohol, all refined sugar, and all heavily processed foods. It isn’t quite clear, the moment I “turned the corner” but it definitely happened.

I gained 30 lbs in 3 months, and proceed to lose it the next year in the same timeframe.

It all came full circle when I decided to shop at Poet’s Gear Emporium.

After being a “Weekend Warrior,” and finishing the Rim Trail of Gulf Hagas in under 4 hours, I realized I had time in the day to check out Poet’s Gear Emporium (per the recommendation of a super kind Ridgerunner who I had the most fantastic conversation about chipmunks with.) I made the drive from Greenville to Monson, and parked in the lot by the general store. I couldn’t have been bothered to put my dirt-filled socks back on, so I approached Shaw’s Hostel “shoe-mando” (no socks.)

The first thing that was happened was a gentleman there mistook me for his son, (which was flattering! I bet his son was a very nice guy.) But we had a very kind conversation in passing. I entered the coveted gear emporium, and was enthralled by all the unique little gems the store had to offer.

Then, I was informed that they were closing just as I walked in.

Still, the girl working there was kind enough to allow me to grab a few items. I grabbed a few stuff sacks and went to check out. I met a few kind thru-hikers, one of which was buying a new pair of Altras before heading into the 100 Mile Wilderness.

I was caught off guard by the question. The fact that this person thought I was a thru-hiker, even though I was just an average college kid who had been through a lot just brought it all together. I knew in that moment that I was completely committed and dialed in. Someday, I would be a thru-hiker.

So, allow me to introduce myself…

My name is Pierce Kempkes, Trail-Name Lynx. (Self Chosen, I definitely would be “Pack Rat” if I allowed someone else to choose it.) I hope you decide to follow my journey to hike the Appalachian Trail.

Furthermore, I hope to see some of you out there.

Howdy Folks! The name is Pierce "Off-Kilter" Kempkes. I am a certified Goofball, College student who loves the Outdoors, and a soon to be Appalachian Trail Thru Hiker! I love the simplicity of Ultralight backpacking, have more dirt on my pack from falling than I'd like to admit, and make a mean Tuna Casserole on a Whisperlite.