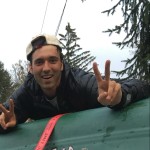 If Thoreau Hiked the AT, This Would Be His Practical Advice 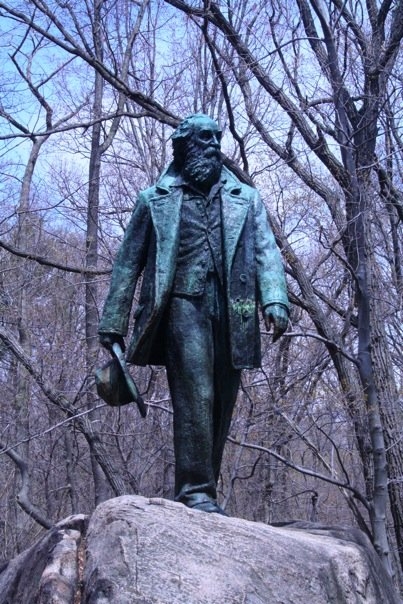 Henry David Thoreau, the Massachusetts transcendentalist who took to the woods to “front only the essential facts of life,” died sixty years before the idea of the AT was conceived. But his name is ingrained in outdoor culture and his legacy, a spirited vestige of the days when one could live with the land, has undoubtedly inspired people to hit the trail.

The truth about Thoreau, however, is that he had more in common with thru-hikers than he ever would have liked to admit.

Here’s why Thoreau was a kind of prehistoric thru-hiker,

and what advice he might offer an AT hiker today…

“It was very pleasant, when I stayed late in town …” – HDT

Often overlooked in Thoreau’s history is how much he enjoyed hiking the trail back to Concord to indulge in a home-cooked meal at his mom’s house. It was about a twenty-minute walk from his cabin on Walden. I imagine his little fling like a sojourn at the Pierce Pond Lean-to in Maine, strolling the blue-blaze to Tim’s for a delicious 12-pancake breakfast first thing in the A.M.

As one doesn’t imagine Thoreau dipping his fork into a five-course meal, someone’s first thought when they hear about you hiking 2,000 miles is typically not “wow, you must have gone to some really amazing Chinese buffets!” But in truth – Thoreau or thru-hiking – the prepared meal is essential to the narrative.

Thoreau would say: If you are hiking the AT in Maine, don’t miss out on Tim Harrison’s breakfast near Pierce Pond. It rivals my mom’s crumble pie when she bakes it with the huckleberries I pick on the north side of Walden. You live in the woods, so don’t ever convince yourself that a town meal devalues the epic nature of what you are doing.

“I would rather sit on a pumpkin, and have it all to myself, than be crowded on a velvet cushion.” – HDT

A typical shelter on the AT sleeps 6-10 hikers and is roughly the size of Thoreau’s cabin which measured in at about 10 by 15 feet. Remarkably, both have been known to accommodate up to thirty guests at a time.

Socializing is now part of the fabric of almost any thru-hike, but it was also part of the life Thoreau made for himself on Walden. Though outside his image, it was not unlike Henry to organize an evening at his cabin with friends and family – as many as thirty at once.

Today, volunteers look after both Henry’s cabin and AT shelters. If you decide to party with thirty friends at either of them, I’m sure those volunteers would appreciate you monitoring your impact!

Thoreau would say: If you are truly looking for some solitude, head south from Katahdin sometime in early August. Finishing your hike at the end of the calendar year is very feasible, though one should be prepared for cold temperatures and some taxing conditions. If you’re hungry in Massachusetts, take the blue-blaze to Concord for some of my mom’s chicken pot pie. But bring your own pumpkin to sit on.

“Think of dashing the hopes of a morning with a cup of warm coffee, or of an evening with a dish of tea! Ah, how low I fall when I am tempted by them!”
– HDT 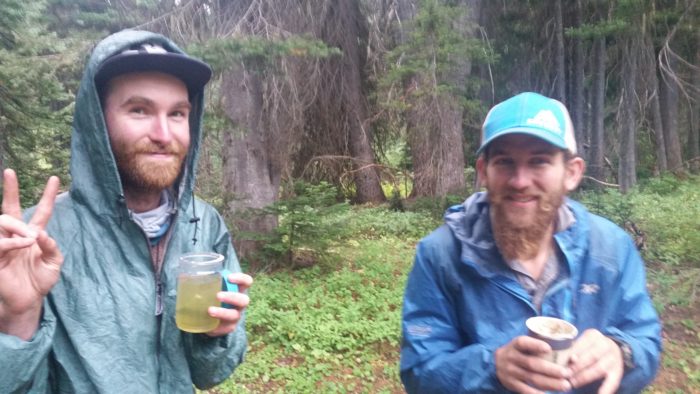 Oh no, not the tea and coffee!

Thru-hikers don’t really eat off the land, but they definitely drink from it. Water is the thru-hiker’s beverage, and it was Thoreau’s beverage, too.

Okay, so the occasional thru-hiker might pack out a beer (or four) but typically, we’re drinking water. In the ultralight age, enough Gatorade powder to make a liter of water tolerable might weigh as much the next guy/gal’s sleeping bag. So water it is.

Thoreau was infamous for drinking nothing but water. In fact, he considered all other drinks, including tea, as potential reincarnations of the devil. I guess that’s where the similarity here stops…

Thoreau would say: ONLY DRINK WATER. But if you are so tempted as to flavor your source of life, try MiO. It’s light, produces minimal floating trash and doesn’t taste as artificial as some of the other packets (although I’m sure it is). Best of all, it’s easy to regulate how much flavoring you add to your bottle. 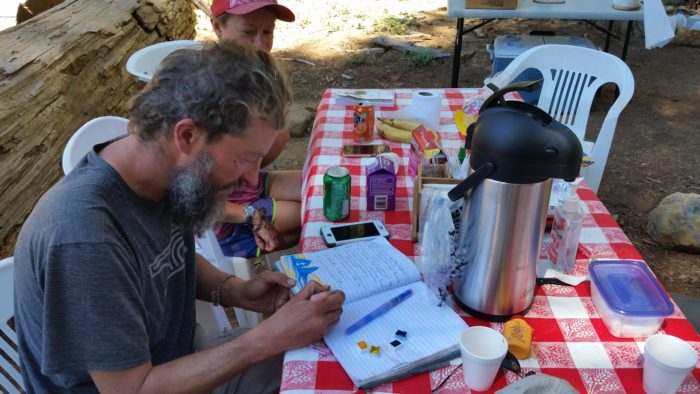 En route to Katahdin, Thoreau encountered what could be described as nothing less than a quintessential thru-hiking experience. Approximately fifty-six river miles north of Bangor, ME where Houlton Road meets the Penobscot River, Thoreau and his buddy fell upon trail magic! In his The Maine Woods (1864) he describes the event, and hardly in a different way than we would today:

“… various kinds of “sweet cakes,” in a continuous line from one end of the table to the other. I think I may safely say that there was a row of ten or a dozen plates of this kind set before us two here.”

Maybe that was just 19th-century hospitality. Or maybe, it was trail magic:

“… when the lumberers come out of the woods, they have a craving for cakes and pies, and such sweet things, which are almost unknown, and this is the supply to satisfy that demand. The supply is always equal to the demand, and these hungry men think a good deal …”

The moral of the story: we should remember the lumberers of 19th-century Maine every time we come to a road and someone is waiting with root beer and cookies.

Thoreau would say: To the hiker who knows trail magic, I would recommend a thoughtful gesture: send thank you notes. This is most conveniently done if you have requested a form of contact information before departing from those who have been especially kind to you. It’s easier to send out thank you cards to all those lovely angels when you have their info jotted in your journal.

I wonder what Thoreau would have thought of the Appalachian Trail. Would he have appreciated the community that builds the AT its hearty soul? To him, would the AT be wilderness? Could he have thru-hiked?

Probably not. Thoreau was consumed by his own worldview (he thought the world’s only important plants were in Massachusetts) and basically argued that to know wilderness and truth one must die completely alone with a belly full of Mrs. Thoreau’s huckleberry pie laying in a bed of pines at no greater than a fifteen foot’s distance from the edge of Walden Pond in Concord, Mass. He was limited by the size of his own head.

So while Thoreau provided four solid pieces of advice in this article, he never could have experienced the whole beauty of the Appalachian Trail. That’s because the trail’s splendor is in its great opportunities: to sense perspective, to meet incredible people different from ourselves, to observe and experience natural places and practice comprehensive stewardship… to learn from a world that is filled with more surprise and grace than we could ever find within the space of our own heads.

Thru hiking the AT, PCT and CDT has been such a privilege. Today, I remember my AT warm-up hike: a few days in NY on the AT surviving on a big box of Chewy Bars. If I can save just one hiker from having to live off Chewy Bars for a week, then that's what I'm here for.