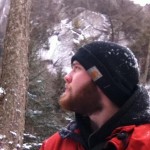 An Introduction to Madness.

First off the “Madness” mentioned in the title directly pertains to the inner workings of my mind brought forth to you in the form of words, and therefore I make no apologies for the content therein.

On that note, Hey! Nice to meet you! My name is Micah Handy. No trail name yet as I still have yet to embark on my Sobo hike (June 1st is the magic day) but I’m pretty stinkin excited/mortified at what it may turn out to be. Although I guess I could always take the advice of a friend and former thru-hiker “If you don’t like it just pretend it didn’t happen and wait for another one to come along”. My grand journey called life began in a Hospital (imagine that)  in a small city called Little Falls (more of a big town) in upstate New York, much like the rest of the valley that I call home its peak was nearly 100 years ago and has been on the economic decline ever since as more and more jobs move out of the area. One town over to the east of Little Falls sits St.Johnsville, the place where I was raised and where my family has farmed for over 200 years. Despite the economic state of the area it certainly has its charms as well, especially if you enjoy the outdoors. In my opinion my valley sitting right in the foothills of the Adirondacks is an overlooked gem of natural beauty.

Now that we have the where out of the way lets get to details shall we?

I graduated from highschool in 2010 and directly following attended Word of Life Bible Institute where I received a 1 year certificate of Biblical study. I tell you this firstly because its part of my life story, and secondly because its part of who I am. I certainly don’t agree with everything that was presented there but my faith in Jesus Christ is an integral part of who I am (don’t worry I wont be knocking on your tent with a Bible in hand). I’m not the type to go around trying to convert you and pointing out all your failures, heck in that area I have enough of my own to go around, but if asked I’m usually willing to tell what Christ has done for me in my life and in the end that’s what we have. Life’s no bucket of roses but despite what “religion” has done to harm people throughout history my personal faith in Jesus has only made my life better.

After finishing my time at Word of Life I still didn’t know exactly what I wanted to do, I had applied at my local community college and began classes that fall of 2011, although I still did not have my major completely picked out. I ended up deciding on Cyber Security and went on to receive my AS in that field.

Upon my graduation from college I again was faced with a fork in the road, what the heck was I going to do? Should I go on to receive my bachelors in a degree that I was capable in but really had no passion for, or should I do something else? I decided for the time to move to Hayesville North Carolina (All of 10 minutes from Hiawassee Georgia) and work with my cousin in his metal fabrication shop where we made heavy duty suspension parts for jeeps and trucks. It was there in the heart of the Smokey Mountains that I fell in love with them. Strangely enough though my move had little to nothing to do with my decision to hike the Appalachian trail. While I was living in NC my good friend Hannah (living in PA at the time) sent me a text out of the blue asking if I would do an Appalachian trail thru-hike. After about 10 seconds of intense mental debate I replied, “Yes, were doing it.” That very night I began compiling a gear list on Amazon. Our group started out as a march NOBO with 5 people plus possibly 2 more. Over time people began to drop out, the thought of either putting their outside life on the sideline for 6 months or the daunting notion of a 2200 mile hike both took their tole on the group. So much so that today we are down to only 2 people. Myself and Hannah. But in all honesty that doesn’t bother me at all. The idea of a large group wearied me, and I am simply happy to have the opportunity to do it.

Now here’s to the question that all those even considering hiking the AT grow tired of hearing. “Why?”

Well why the heck not! Haha…. But no, really.

The trail has a different meaning and significance for everyone who hikes it, although some circumstances may align it ultimately differs. Like you will see written time and time again “hike your own hike” because in all honesty everyone’s hike is their own, and if you try to hike someone else’s you will miss what it has for you. For me it started out as a singular purpose and only continued to expand and evolve. At first it was only an adventure, something that few people do, something that I could conquer. But it quickly became more. Still at an impasse as to the specific direction of my life I desired the quiet introspection and clarity provided by the trail. A time to live without the hassles and demands of the outside world. It may sound like I was running away, but it was and is the exact opposite, I am running towards something, towards the future and I’m truly excited to see what it brings.

But that still doesn’t entirely answer the big “why”. Somewhere along the way Hannah suggested we look into a group to raise support for while we hiked. This sounded like it would be a challenging task, but with a group that you believe in it could also be very rewarding. We decided on Love146, a group that fights to end child sex trafficking around the world and provide a loving and safe environment to aid in the healing process for those children saved out of that horrible world. Did you know that human trafficking is the second most profitable illicit business in the world? Well most of the world doesn’t, and before love146 neither did I. It goes on behind the scenes and it is everywhere, even in America it is alive and thriving. And for that I want to do my part to see it end.

For now that about sums up my introduction, In a little more than a month I will be starting my SOBO hike on Mount Katahdin. I’m anxious yet very excited.

Stay tuned over the next few weeks as I release my gear list along with reasons for each choice. and possibly some more goodies as well.

Crazy! Raving mad! Well... At least that's what most people say when you tell them your going on a SOBO thru-hike of the Appalachian trail. The truth is though I am your average guy who grew up on a farm in upstate New York. Growing up I learned to love the outdoors, especially New York's very own Adirondack park, 3,000 some odd square miles of lakes, rivers, forest, and mountains. I have an AS in Cyber security (So you know I have to be a little bit of a nerd too. Lol) and am by no means a savant when it comes to writing, but bear with me as I am sure that something interesting is sure to pop up if only by pure chance. =)