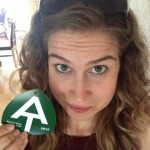 I had to take a break.

Everything that can be said about the end of a thru-hike, I feel, has been said.

And I was sad; post-hike sadness is real. Having to re-adjust to ‘normal’ life again is real. I felt like sitting down to write this post was the true end of my hike and I couldn’t do it, couldn’t admit it was over, didn’t want it, don’t want it to be over. So I took a break. I didn’t read other hikers’ posts. I didn’t look at your summit pictures too closely. I didn’t look at my pictures. I didn’t want to see or think or hear about any of it. As odd as it may seem, I had to step away to keep my hike for me.

But my summit-versary (if you will permit the word) was just over a month ago and I’m ready now. I’m ready because I finally realized that you can take the hiker off the trail, but you can’t take the trail out of the hiker. 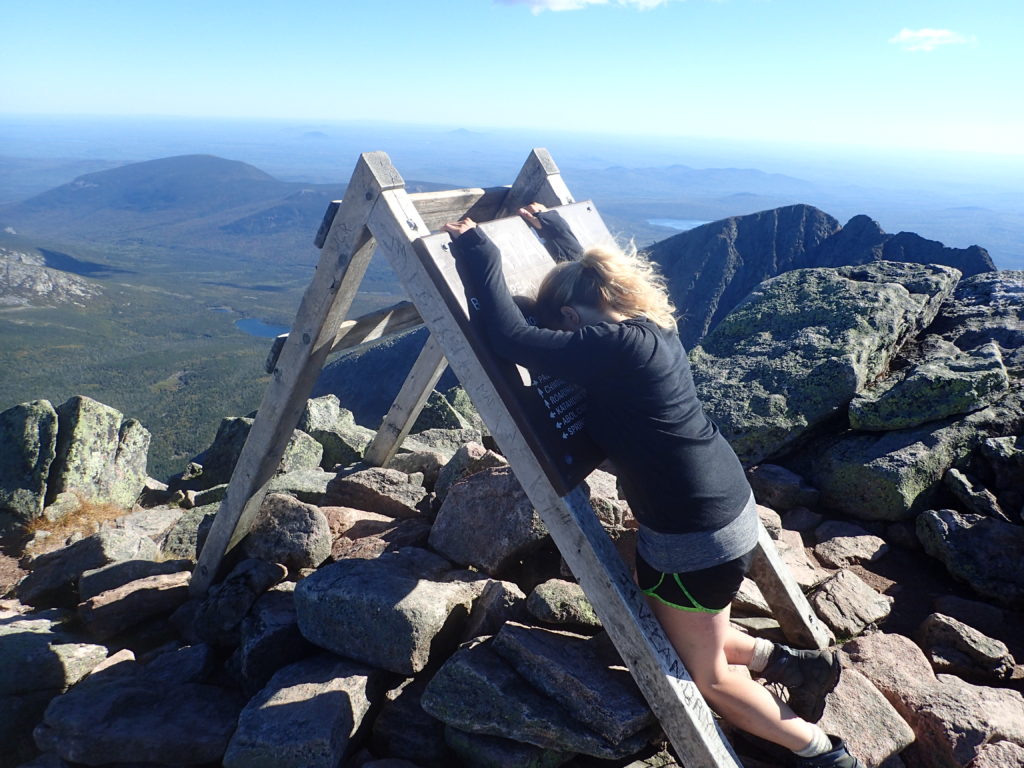 The emotions are real. This is the end.

I can’t back up and tell my summit story as if it just happened. I’ve processed it too many times and, frankly, retelling it like that isn’t important. It was another day, another hike, another mountain. I climbed up rocks and rebar, I filtered water along the way, I hiked through the rising sun, I saw friends from my hiker community – Beehive, Old Timer, Little Bear, St. Nic, Haiku, Cake, Hazel, Storm – finish their hikes, and then I climbed back down. 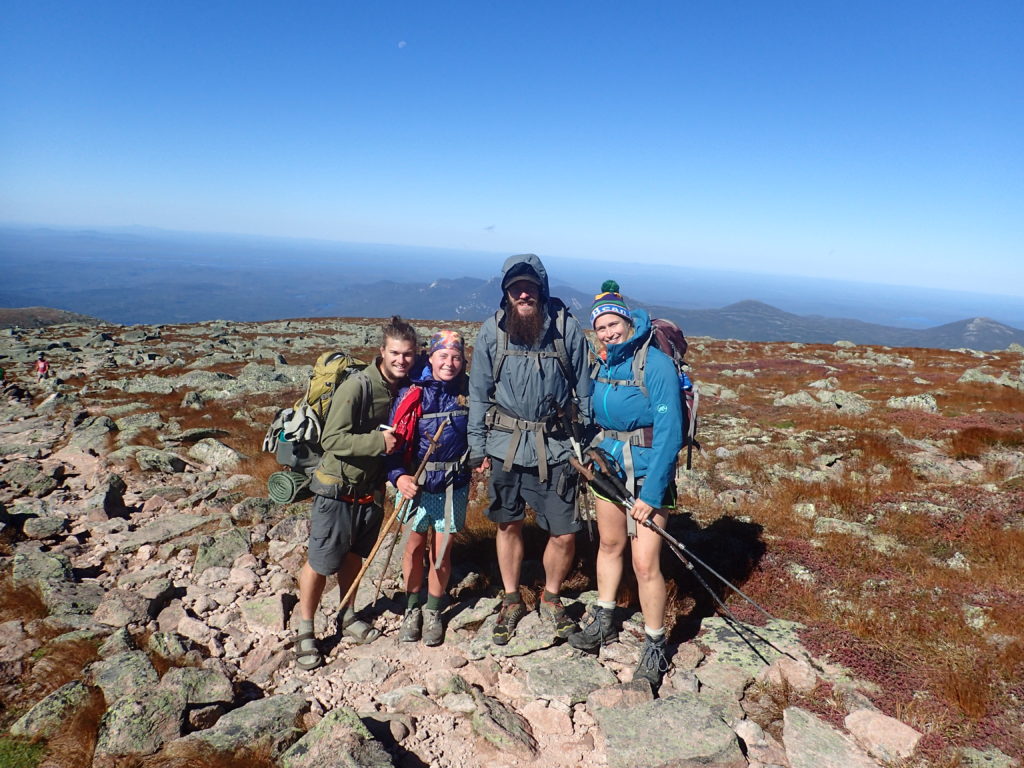 Ron Paul and Crash about to summit as Beast and I head back down.

The important bits about Katahdin Day (that’s how I think of it) are the “feels”. The surreal feeling of finding Kraig hiking south to meet me as I hiked north from Abol Bridge to Katahdin Springs Campground. The surprise moment when we first saw the summit sign. The euphoria during descent. The grateful feeling for small things at our mini-parking lot celebration. The jealousy. The sadness. The realization that there is more to follow. 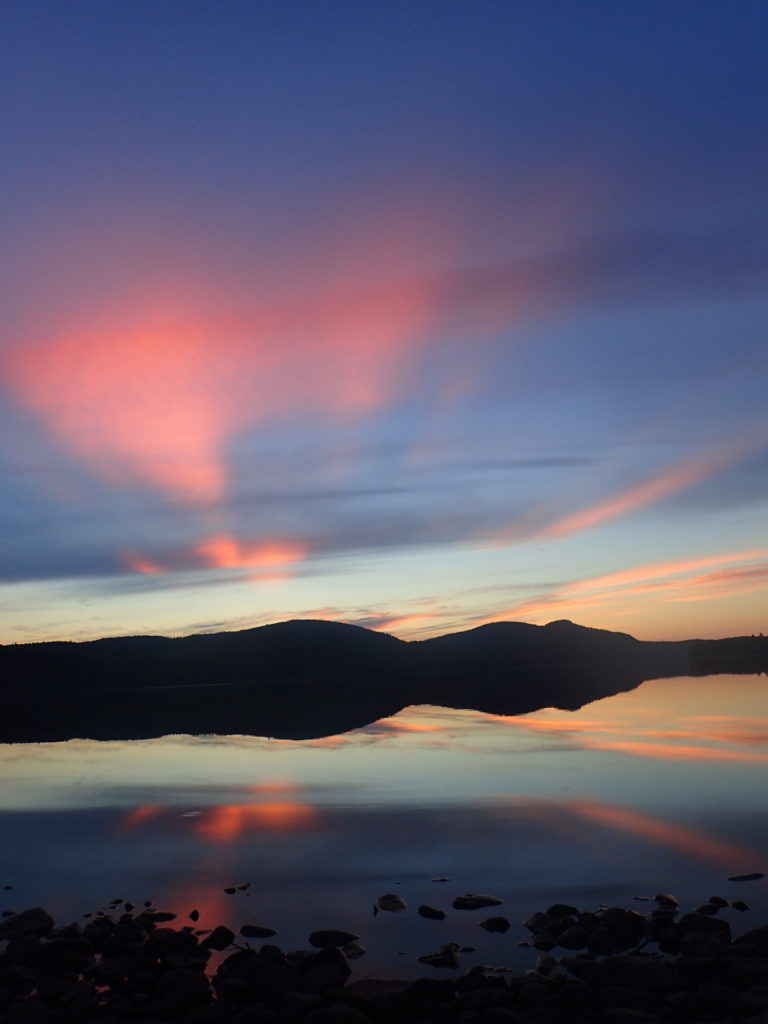 Sunset outside of Monson 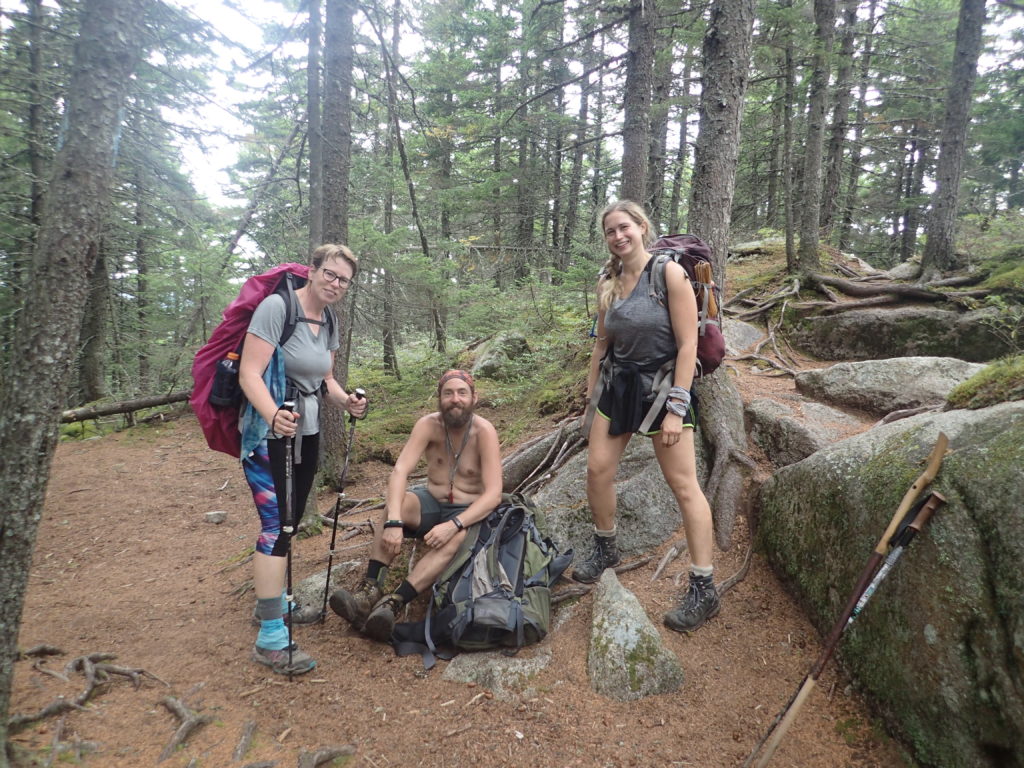 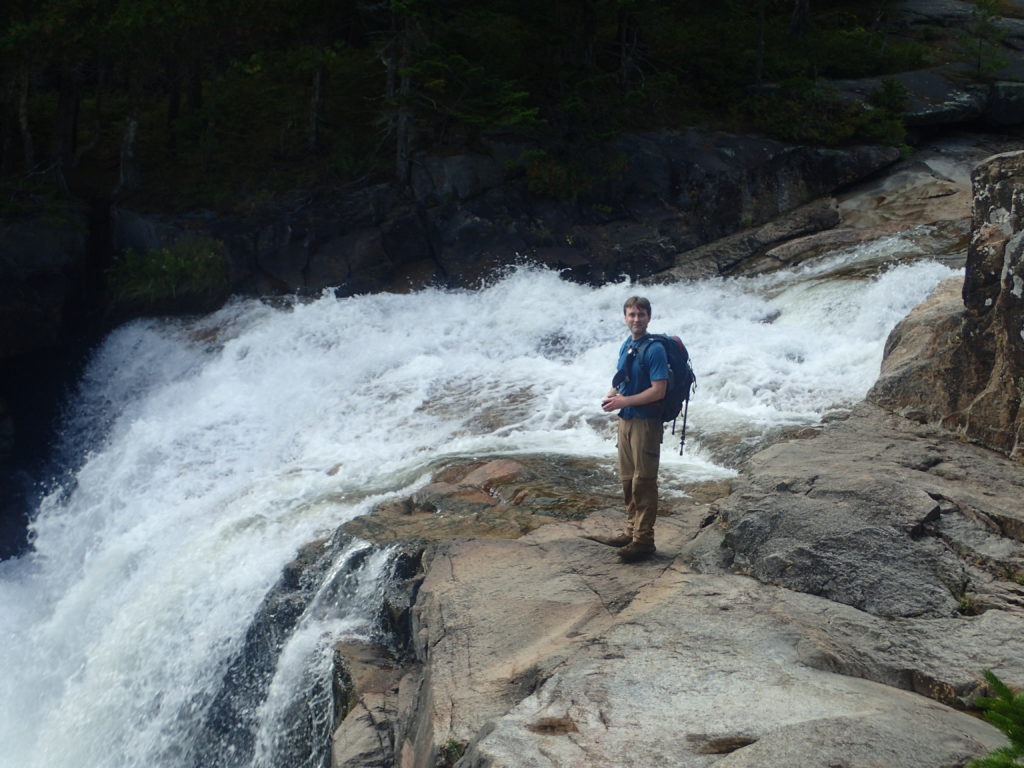 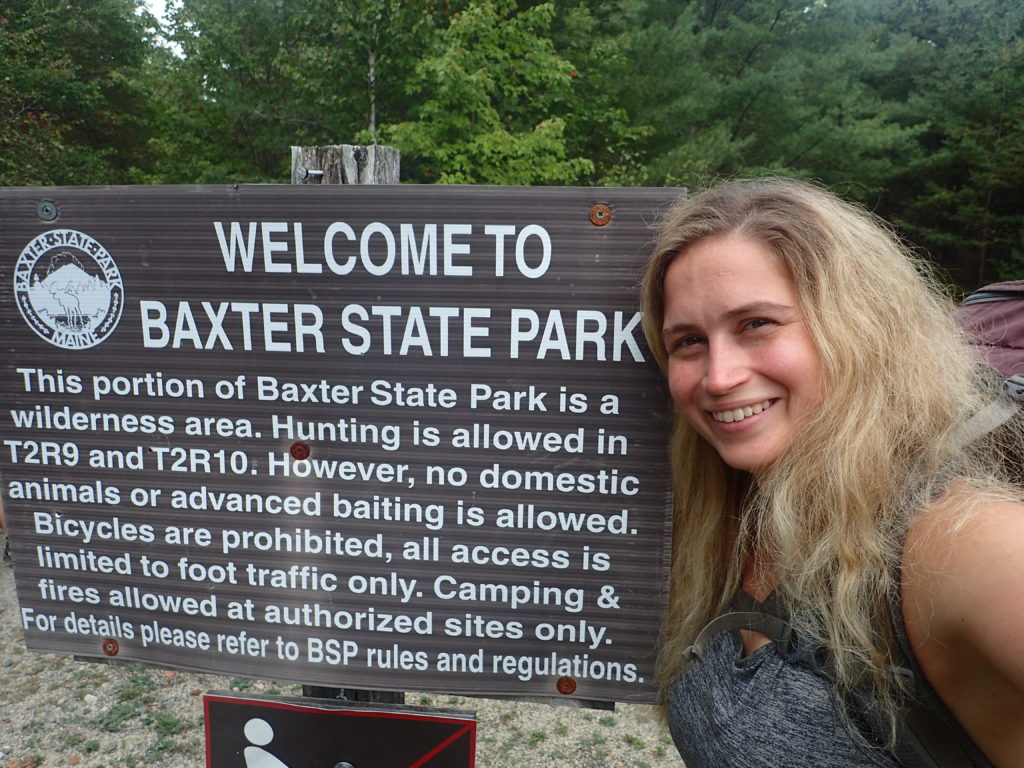 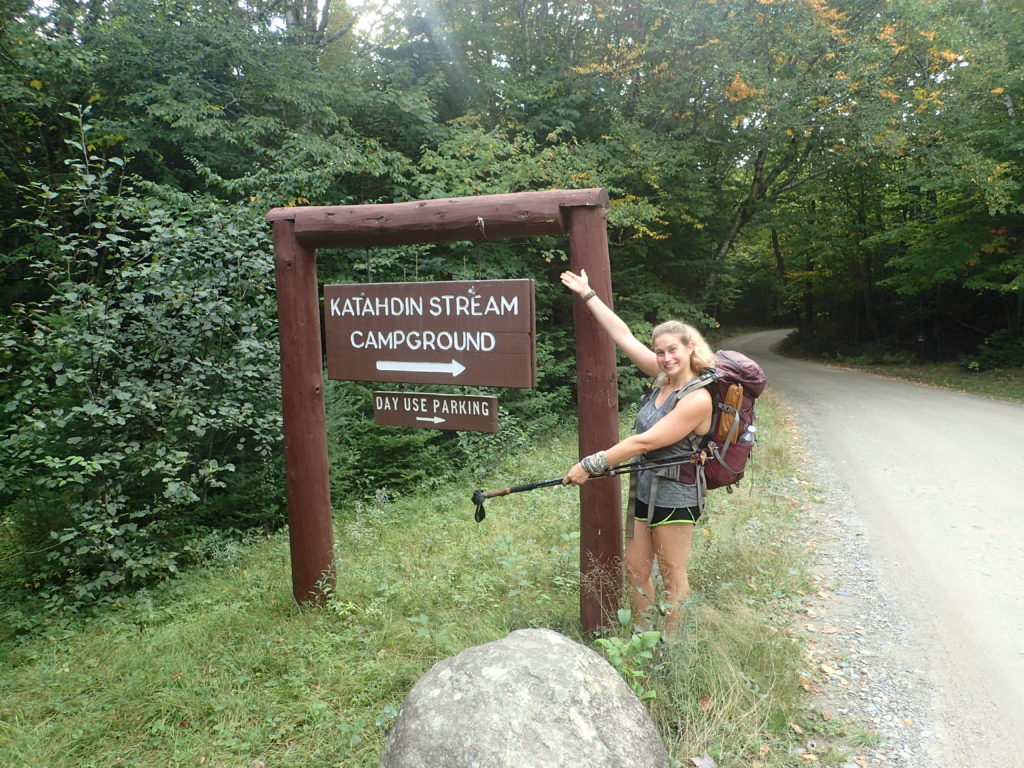 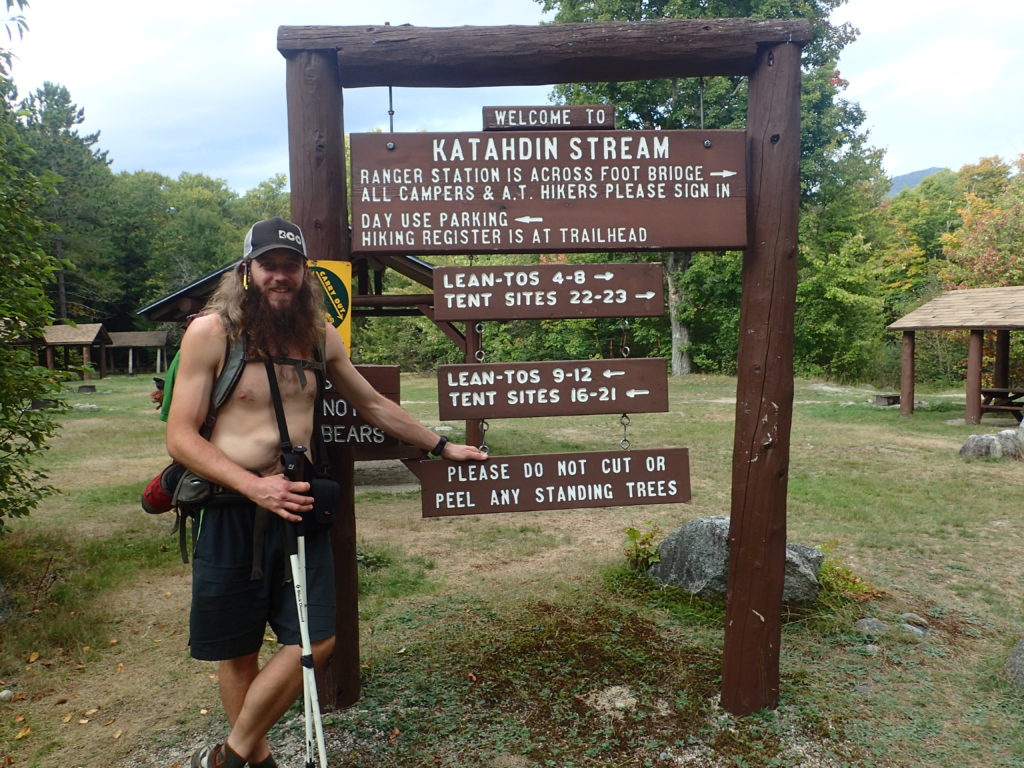 Not just in Baxter – all the way to KSC!

The first indication that it was really, truly almost Katahdin Day was finding Kraig in the woods of northern Maine. Kraig, who drove me to Georgia at the beginning of this crazy adventure. Who hiked the approach trail and first few days with me to make sure I was all set.  Who came to visit in Virginia for no other reason than that it was close. Who rescued me from Pennsylvania. Who hiked all of New Jersey in 80+ temperatures. And here he was again, the last time he’d come out to visit me on the AT. He put in nearly a 20 mile day so we could hike that last bit together, camp the final night, and then summit together. If there was one thing I underestimated when preparing for this hike, it was how involved Kraig would be – and I say that in the best way possible. Having him as my stalwart, unflappable, and constant support system was invaluable. Having him there for Katahdin Day was priceless. 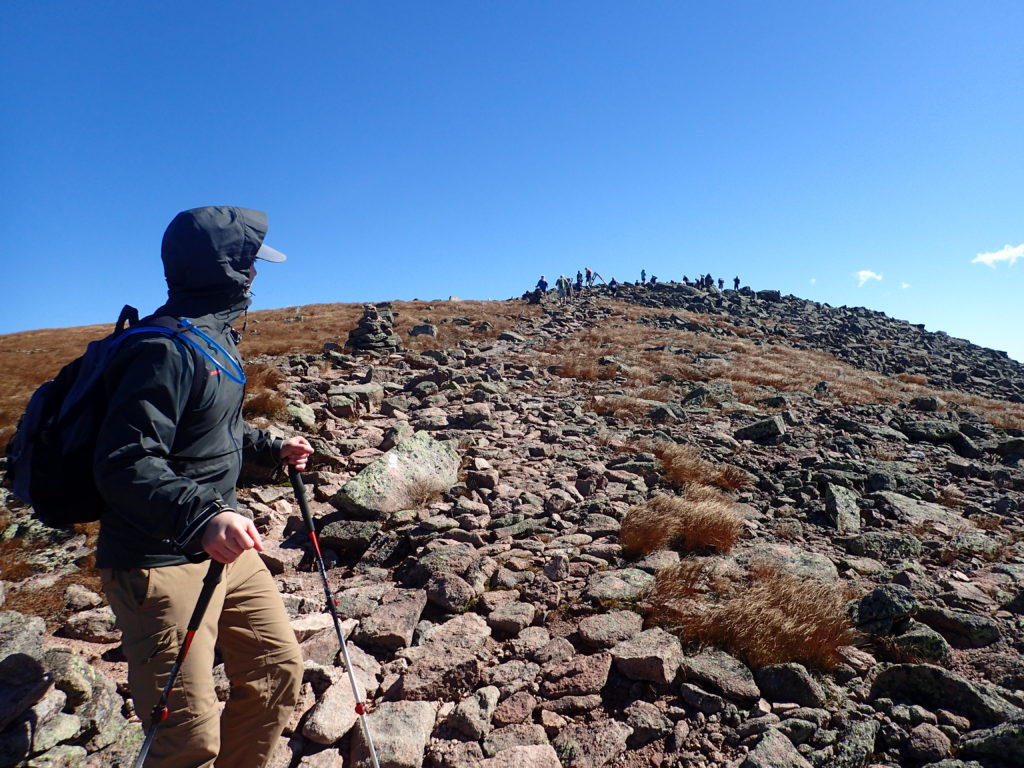 Kraig contemplates the summit as we descend

The hike up Katahdin itself was also remarkable for its beauty, difficulty, and feeling of finality. From camp to summit is only about five miles, but it’s an arduous, hand-over-hand five miles. It’s five miles wherein I realized how far I’d come as a hiker. A relatively flat hike quickly morphs into a series of rock scrambles. In the scrambles, I had to leverage my body up using minuscule toeholds and handholds. The wind whipped at my legs, the sun rose blindingly, and I pushed on without worry. I knew from months of experience that my body could handle the physicality. I knew from months of friendship that Beast had my back if I needed it. I knew from hiking in ice, sleet, rain, sun, and fog that I had the proper gear for nearly any emergency. I knew from navigating the Whites in fog that losing sight of a few blazes heading up Katahdin wasn’t anything to worry about. I knew that the green novice who started in March had forever been replaced by an experienced hiker who, although she has much still to learn, can handle many of the challenges these mountains throw at us. And this enduring sense of change, growth, and strength lent a heady, newfound confidence to my adventuring steps. 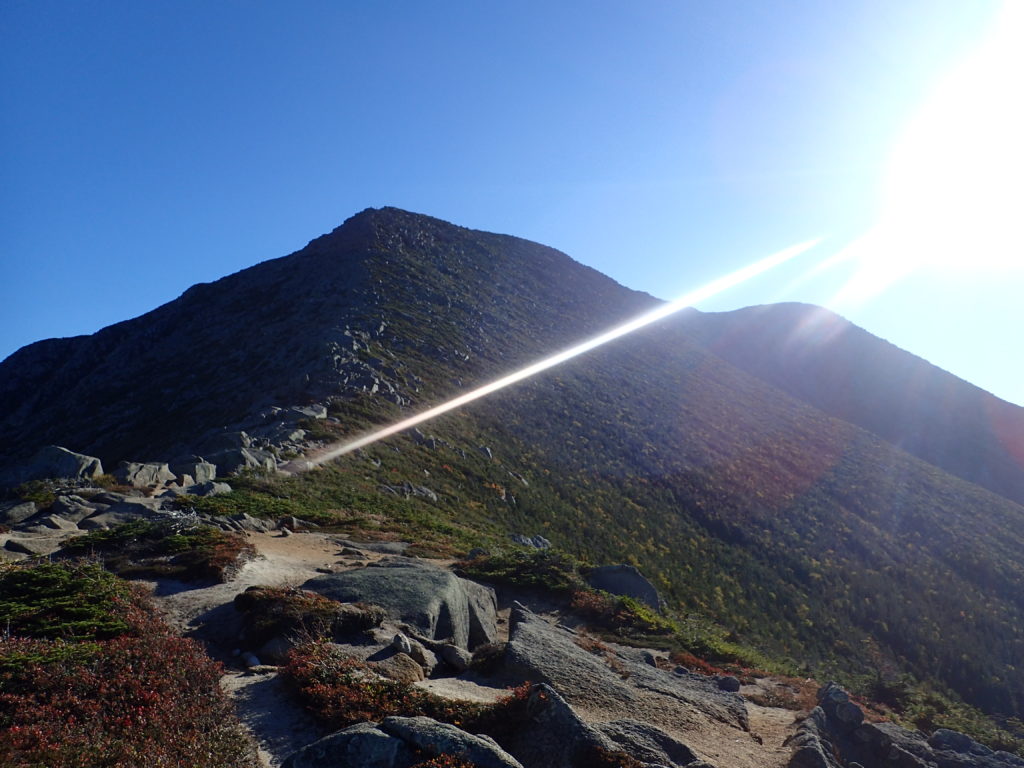 Hello Katahdin. Nice to meet you. 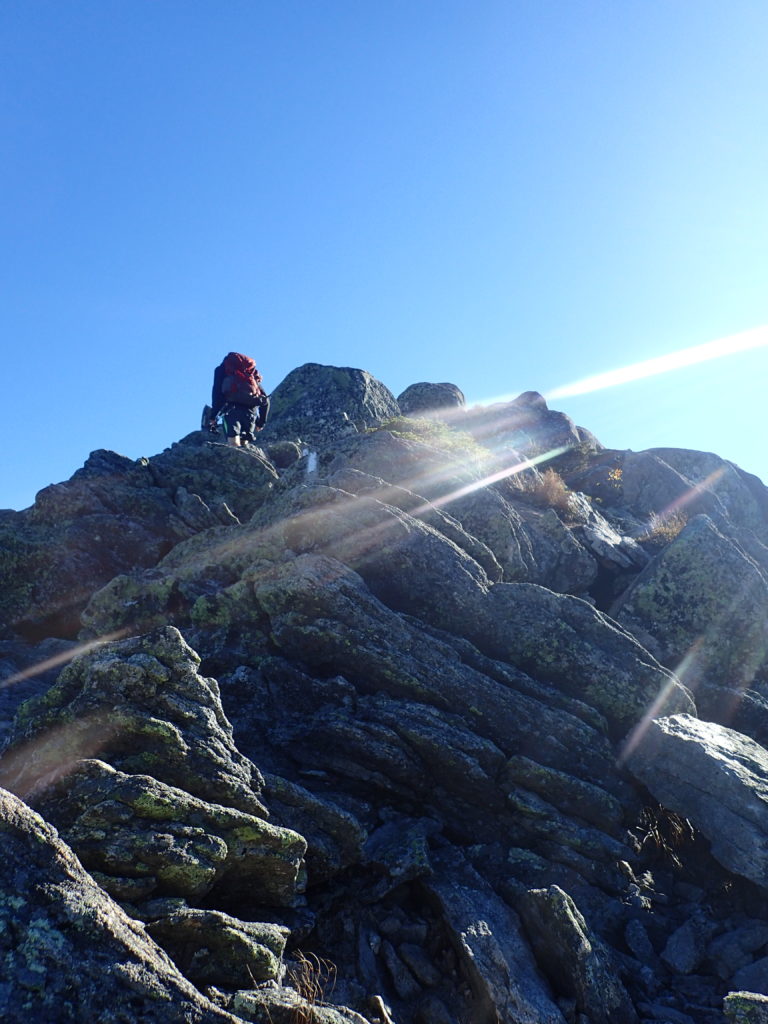 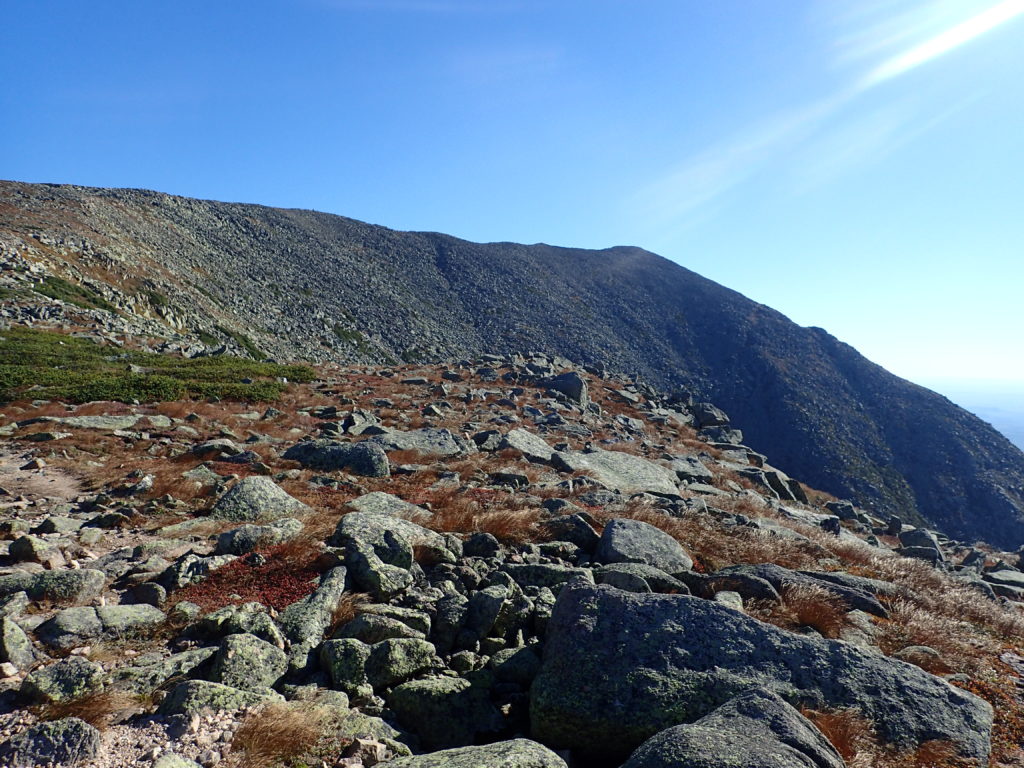 A view to Knife’s Edge.

To be honest, I thought what turned out to be the actual summit was a false summit. When we saw the peak, I was still geared for another hour or more of hiking. Only upon closer inspection did I realize that the peak I believed was the summit was actually out on Knife’s Edge. So when I saw the sign, I wasn’t mentally prepared. It seemed to manifest itself from nowhere. Beast and Kraig are saying, “Hey we think that’s the top,” and I’m saying, “What? No. Not yet! It’s over there . . . Oh. No. No. Nope, hey look, is that the sign?” And indeed it was. And then I took off. Or rather, “we” took off. Kraig climbed his a## off on that mountain, but after months on trail and more than 2000 miles behind us, Beast and I had trail legs like tree trunks. When we saw the sign, our merry hiking group of three dissolved rather abruptly as Beast and I surged towards the finish line. There it was! I mean, there it was! I’d thought of this moment for a decade while telling myself I’d never actually thru hike. And then I’d thought of this moment for six months of planning while telling myself I probably wouldn’t finish – most people don’t. And then I’d thought of this moment everyday on the trail – something to walk towards when things got tough, something to dream about alone in my tent at night, something to anticipate with happiness when things were going well. I can’t really convey what it feels like to accomplish a goal you’ve had for so long, a goal I didn’t really think was obtainable until well into this hike. Giddy, happy, disbelief is perhaps the most accurate description. 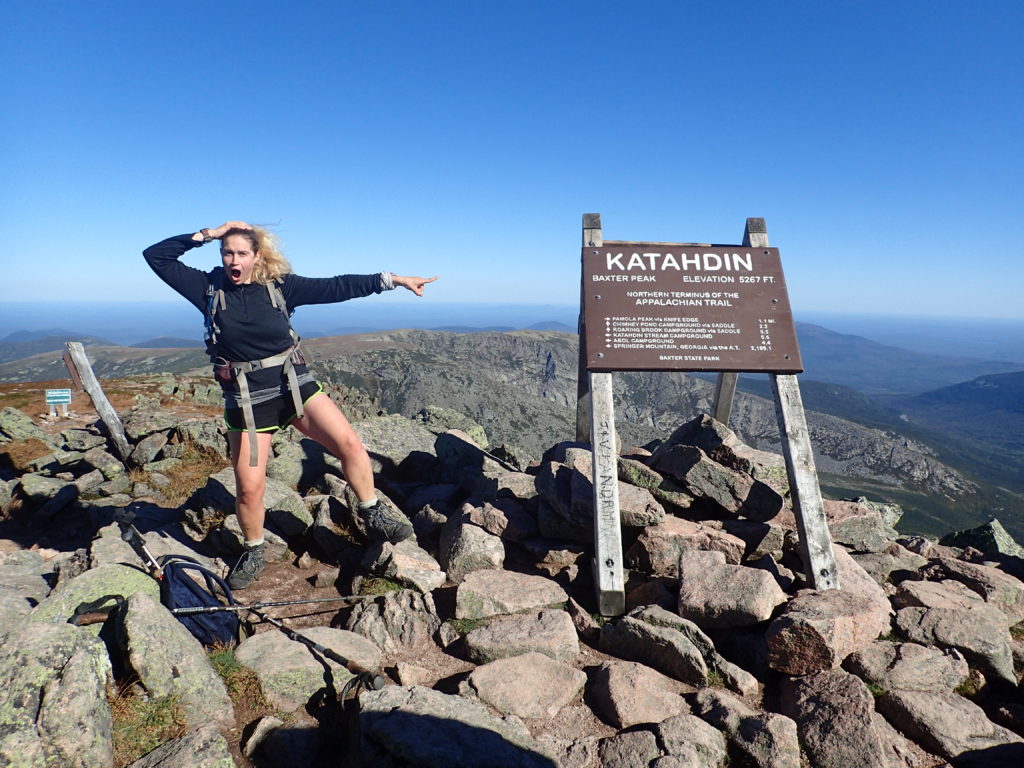 I touched the sign. I didn’t take photos on it right away. I just stood up there. On top of Katahdin. A thru hiker. A real thru hiker.

And then of course, you hike down. We started up early – not “let’s see the sunrise from the summit” early, but 5am early. We shared the summit with only a few other people and enjoyed a great deal of solitude heading up the mountain. On the way down, however, the trail was crowded with excited thru hikers, exhausted daywalkers, and even a military training group. Beast and I created arches with our trekking poles for our friends Ron Paul, Crash, Little Bear, Haiku, and Cake as we passed them heading up for their summit. We stopped to talk with Hazel and Storm – the former’s husband is terrified of heights and was still gamely heading upwards to watch his wife summit. It was an emotional moment seeing him hold onto the rocks whiteknuckled, but determined to witness Hazel’s crowning glory. As odd as it seems, I was the most euphoric here – on the way down. Mission accepted, challenge met, goal accomplished. Game. Set. Match.

A long day of hiking later, we made it back to Kraig’s vehicle in Katahdin Springs Campground. We pulled out folding chairs, snacks, cold drinks, and sat in the parking lot for over an hour. It was an understated end to the day, but perfectly fitting in that a couple of hungry hikers were again intensely grateful for the simple things Kraig thoughtfully provided: chairs with backs. Little Debbie’s. Dr. Pepper. Did I mention the chairs with backs?

On the way out of the park we passed Brother and Sister heading towards the campground. As I waved good-bye to them from the truck I couldn’t help but be a little jealous. Their Katahdin day was still in the future. Their feelings of euphoria and success were yet to be. They still had the joy of anticipating the climb and the thrill of actually being there. My small fit of jealousy turned to sadness as we exited the park. What now? I’d identified myself as a potential thru for months before my trip, as an aspiring thru during my trip, and as a successful thru as I completed my journey. Now back to what? To a 9 to 5. To the daily grind. To crowded restaurants. To people driving dangerously while staring at their cell phones. To a broken down car and a society where material possessions often seem to have more value than I can ever give them again. The post-hike sadness is real. Where do hikers and hiker trash that are not currently hiking fit? Where do we belong?  When do I get to go back to the mountains? Why does no one else feel like the city is an outfit that no longer fits quite right?

And though I write this from a happier place, I still ask myself these questions. And I am still happiest when planning my next escapade. Now an AT thru hiker, forever an AT thru hiker, next . . . who knows? But the adventures await and I am ready. 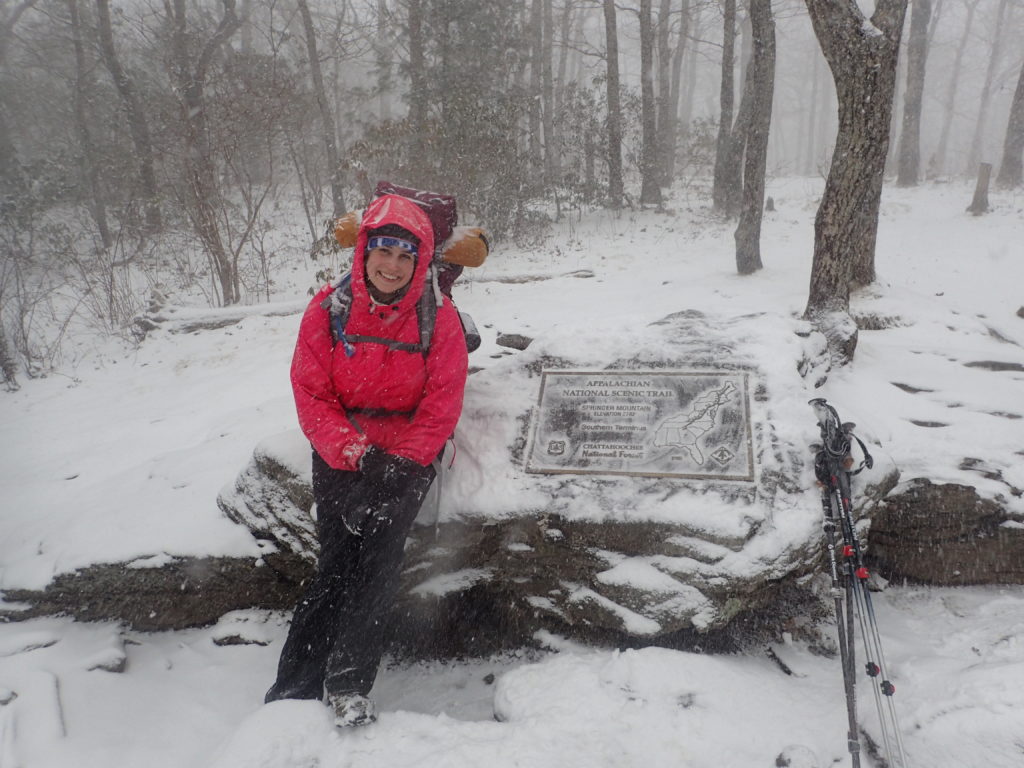