I left off the last post checking into the Atkins Comfort Inn. Fast forward to the next morning (because I didn’t leave the comfort of my room), when I had every intention of getting back on trail. Three hours of on and off continental breakfast destruction later I decided it was too cold for my liking and booked another night, feeling like a major wimp but happy I didn’t kick myself out.

Reflecting on the trail at this point was exhausting. I was trying to put a positive spin on the severely not-so-positive emotions I was feeling at the time until all of a sudden that question happened; am I about to quit? 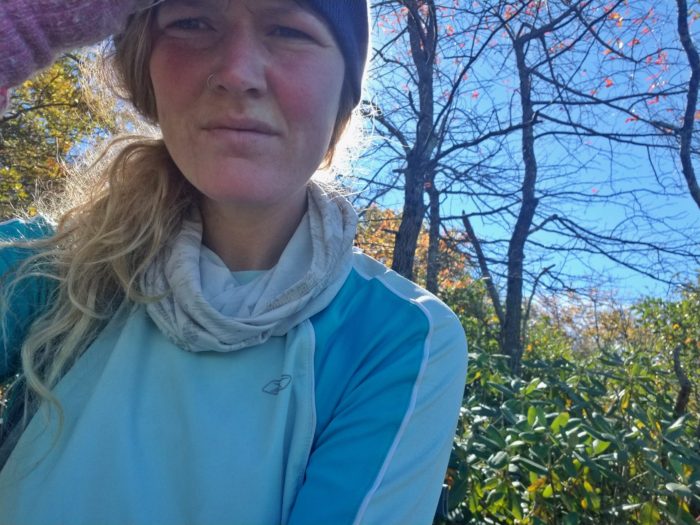 Lol, at my accidental photo… but relevant to that current mood because I’m not smiling for once.

I lost my trail legs thanks to the Hurricane Florence break, when the routine of walking, eating, walking, eating, walking, and sleeping was completely shattered. In those nine days I’d gotten used to the cushy life—rolling out of bed late to pour coffee that had been made for me. You may not realize this but coffee is a big deal. You’ve got to find water, filter it, and boil it in a grimy pot; all for a taste of good ol’ instant coffee. Once I found mouse droppings in my cup and didn’t have soap to clean it so forgive me for stressing the importance of a mere cup of coffee! Anyway, on top of my being a legless thru-hiker, my weight loss totaled 15 pounds since beginning, mostly a result of that nice little stomach flu I had, but my point is that getting back on trail was hard, and a few hundred miles later it remained hard still. 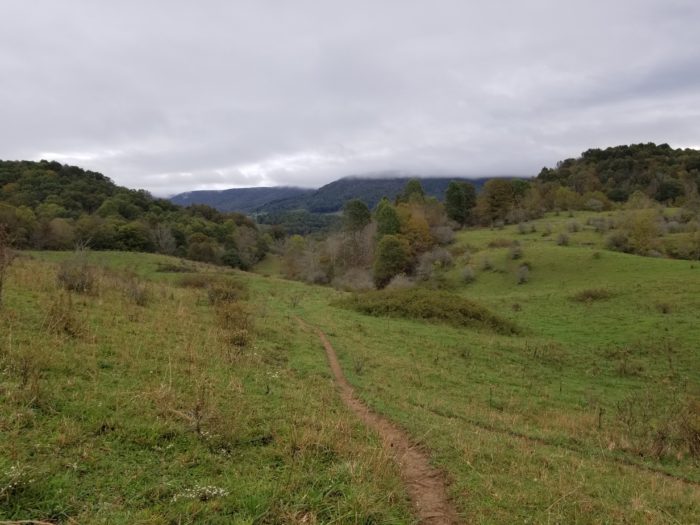 Motivating Myself (with the Help of others)

Growing up on a basketball court I was shown that a game isn’t over until it’s over. That’s an obvious fact, yes, and though it felt like I was almost done the trail, I was far from it. It’s not uncommon to watch an entire game of basketball only to watch it go into double OT, making you wonder why the first half even happened. I was done with the first half, and at that point (in Atkins) I’d completed 75 percent of the trail (545 of 2,190 miles left). The fourth quarter was only beginning and everyone knows that’s where it all happens. The last two minutes alone can take like, 20. 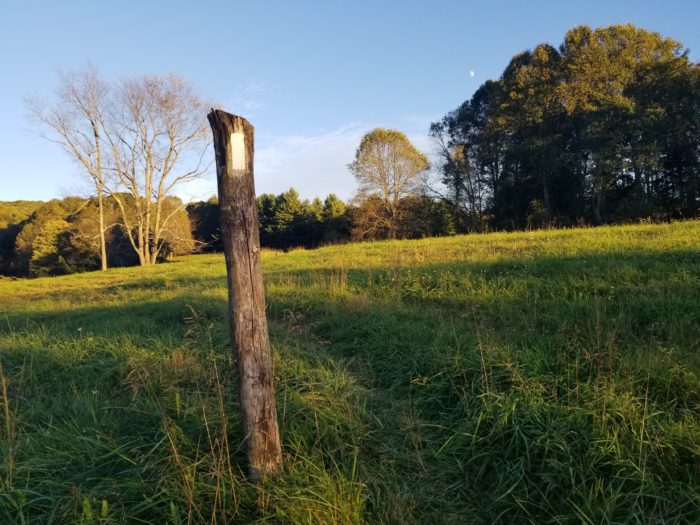 For me, walking with a set of legs that felt muscle-less really meant the second half was a clean slate. If only I could just keep chipping away and chipping away at not the score, but the mileage, I could do it! To come back from a 25-point deficit at OFSAA in my senior year (yes, I sometimes go back to the glory days) I knew there was still hope for the trail.

I’m going to blame the weather for making the trail increasingly difficult. To be exact—it’s the cold. I’ve never been a fan of the cold, and I’ve also never had quick feet. When I’m defending someone on the court who’s faster than me it’s only natural to give them extra space. It took me a long time to realize I had to change something out there so I tried—mostly out of desperation. I had a 60 percent off code on five products at Mountain Hardware so on the Atkins computer I purchased the following to be sent down the road to Damascus:

$500+ dollars later I was confident the brand new gear would get me comfortably to the end. 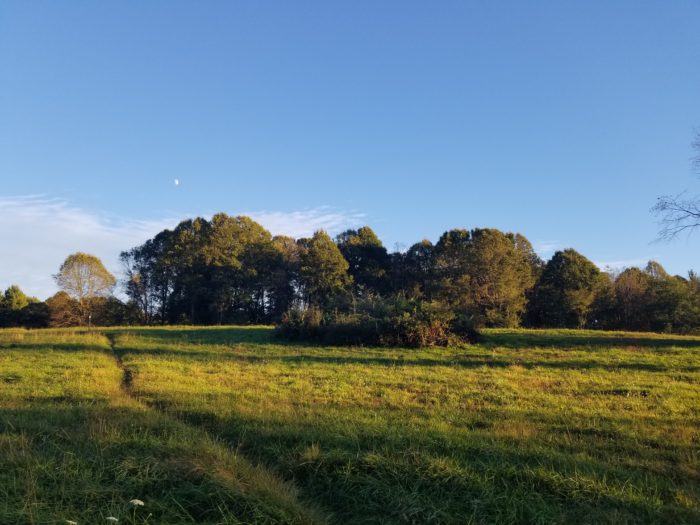 I’ve got to give my coaches a huge amount of credit for how far I’ve gotten to date. I hope I gave them some gray hair because in exchange I sometimes hear yelling in my head—“Are you tired? Run faster! What were you thinking?! Do you need a sub?”—because no sub, thank you, I’m going from Maine to Georgia and that’s that. I didn’t sprint 10,000,987,654 sets of stairs and suicides this past season just to choke in the fourth quarter of the trail and claim I can’t make it up a few more hills! Sometimes it’s all the motivation I need. Other times I think of President Vaughan at Loyalist College for making me believe I can achieve greatness. That sounds pretty cheesy, and unlike me–I’m aware–but she’s a huge supporter of college athletics, then further went above and beyond what I ever thought possible and believed in me to be a valedictorian of the 2018 college graduating class. 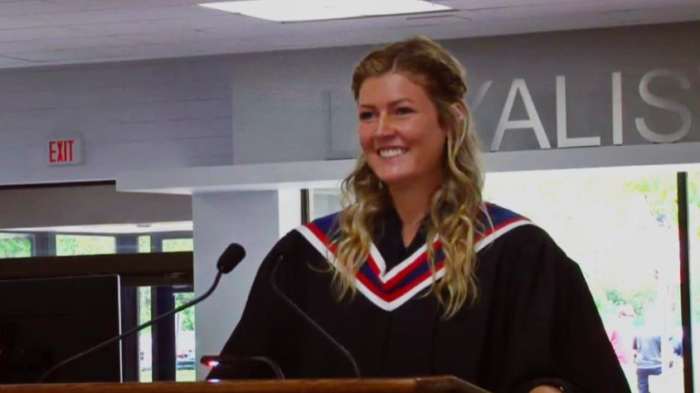 President Vaughan made me realize I could do things that before seemed impossible (public speaking). Winning a basketball game, giving a speech, walking 2,190 miles—it’s all something that can be achieved if you’re determined to succeed and don’t happen to break any bones in the process.

This post is basically a reminder to me that success happens when you work hard, and to continue doing just that and everything will be OK pending you give it your all. The trail is fun and amazing and feels worth it 99.9 percent of the time, but there are some days that make you think you regret it all. The regret is only temporary and I’ve been learning not to dwell on those days or else the only way I’d see Georgia is if someone drove me there. From another perspective, I respect those who quit the trail—not when things get hard–but rather realizing that it’s just not for them. It’s definitely not for everyone and to get off trail takes a whole lot of courage in some cases as it’s basically just seen as a failure to people who hear the term “quit” and generalize it. 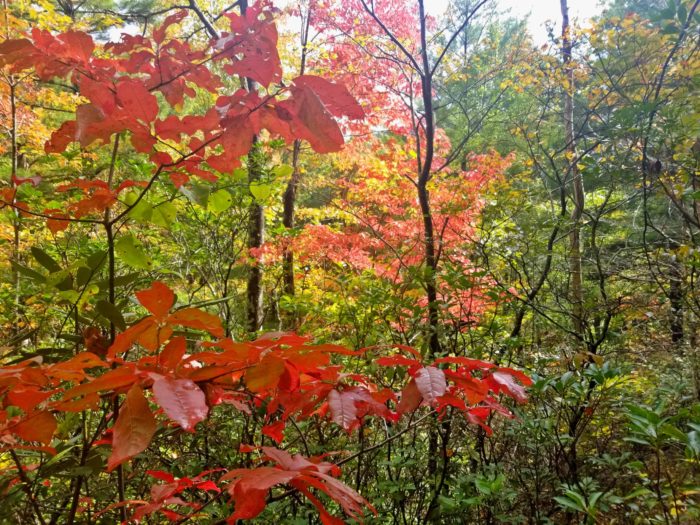 I remembered that day the sun would shine again, hopefully soon, and the cold rain couldn’t continue forever, so in the meantime I’d enjoy everything else that the trail had to offer—definitely not dwelling on the bad days—and keep chipping away at the miles. I knew I was never going to quit because I love being out there. I had some help from that nagging competitor in the back of my head that won’t let me quit anyhow, plus a crazy amount of encouraging messages from people I didn’t know on top of those I did had the deal sealed. I’m in it to the end.

Later that zero day I had an Italian restaurant deliver me food for two. Obviously, I ate it all as I caught up with friends from home. My mood went from miserable to happy and I left with Damascus on my mind as the next destination. Jake and his $300 truck picked me up as I hitched back to the trail, breaking down once to be fixed shortly after he popped the hood and tweaked something or other. It made me want to take some mechanic classes later in life. 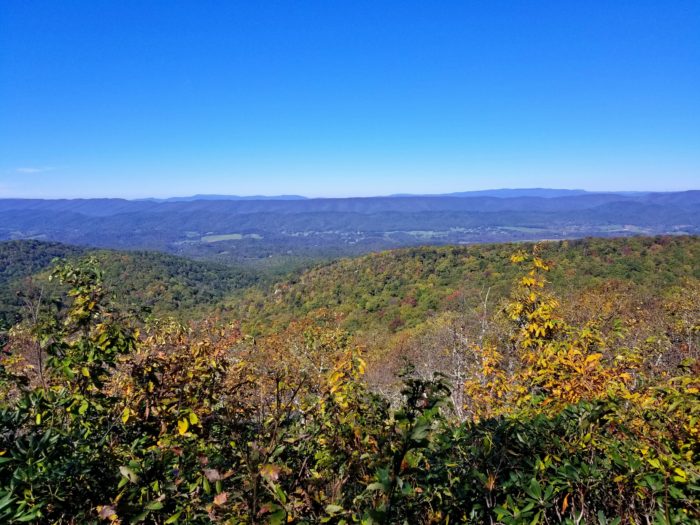 I did 28/29 miles that day before throwing down camp in the dark somewhere, waking up and crushing another 28 the next day. In those 28 I remembered how much I loved being out there and was mind blown at the realization that a mere couple of bad days had such a large impact on the overall hike. I met Odie and Pretty Feet that morning, then I went through the Grayson Highlands and fell in love with hiking all over again! 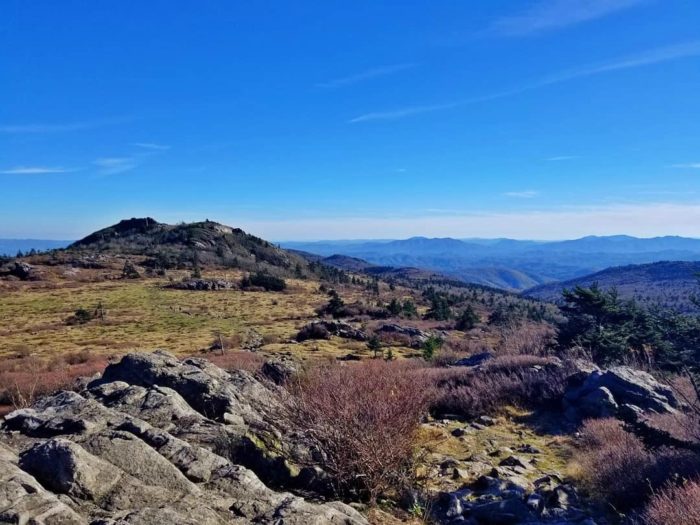 Looking back on the Grayson Highlands.

Out in the open field with the roaming ponies I had the long-lost feeling of being warm, and in direct sunlight I lay down right there and read my book and ate all the bagels I’d taken from the continental breakfast. It was a great day indeed. (PSA—ponies are not baby horses!) 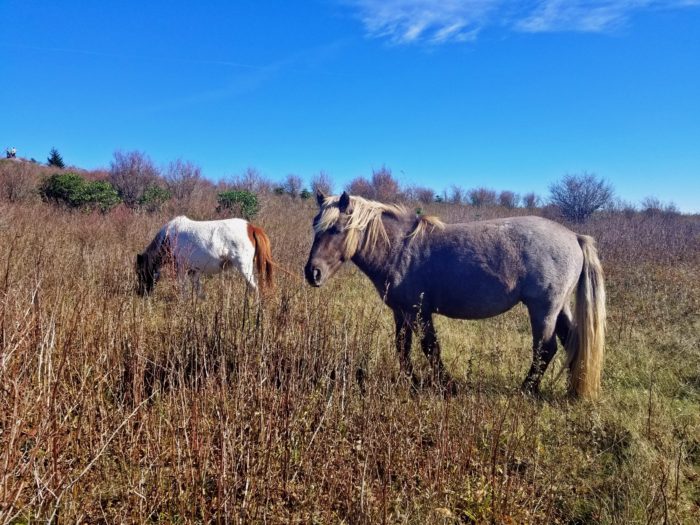 I camped about 20 miles from Damascus and woke up to rainfall on my tent. It was peaceful, and I was totally bundled up and warm so I figured—what’s the rush? I read until the rain stopped and went on to Damascus. I ran into Tank, Crispy, Field Trip, and Penny as I was on my way to the hostel and they were headed back to the trail. I showered and got comfortable, and in ones and twos my people started to show! Pineapple and Sugar Glider, Baby, Loon, then Pretty Feet and Odie, all staying at Woodchuck’s Hostel for the night. 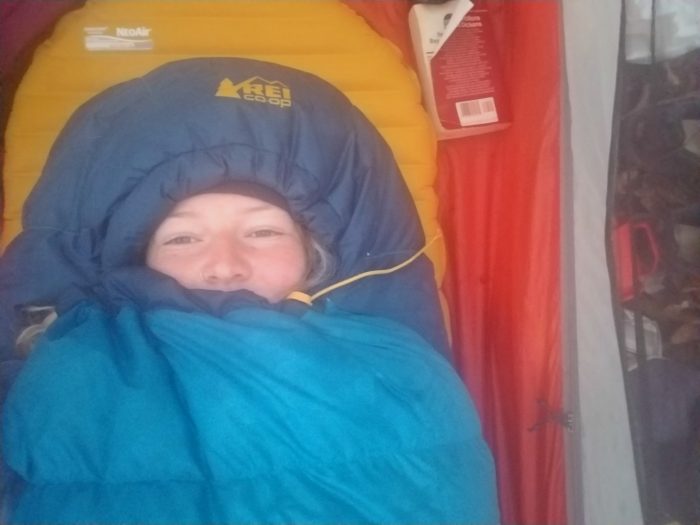 Listening to the rain on my tent, knowing Damascus was only 20 miles away

My package full of warm winter gear did not show; in fact, it was somehow canceled, so that’s one way to save money. I didn’t bother ordering it again because it would have put me in debt anyway, so maybe it was a blessing in disguise. Everyone else arriving at the hostel made up for it anyway. They’re all SOBOs I’d met on trail and it was refreshing to know I had friends scattered about and people who knew me. To be warm and surrounded by people was what I needed, and I went to bed feeling happy and confident that I would enjoy the rest of the trail—lack of winter gear and all. 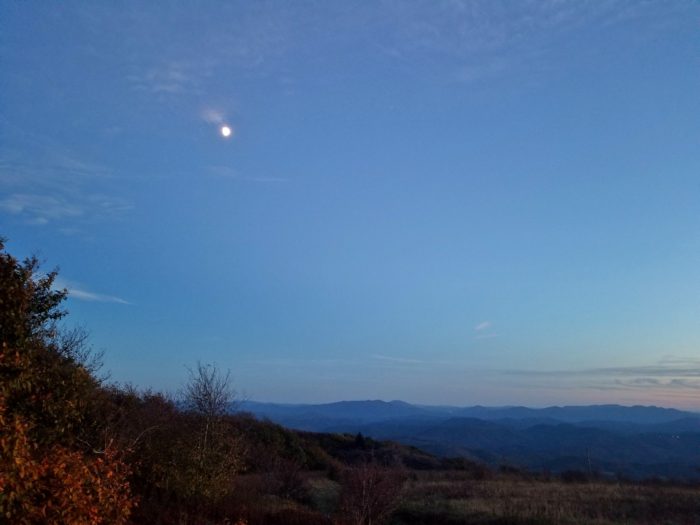 Loon and Baby were zeroing the next day but the rest of us were getting back to trail. I was comfortably wrapped in a blanket and clean loaner clothes, so from a couch I watched everyone hit the trail. Then I heard about the basketball hoop around the side of the house that was before unnoticed by me. Woodchuck said the record was 51 consecutive free throws, and I thought about how I’d love nothing more than to beat it. Spoiler alert—I didn’t, but I did try for a very long time that day, resulting in me being there an extended period of time. I hit 34 consecutively and earned a photo on the wall. There was a net underneath the hoop that retrieved the ball and you didn’t have to move. I couldn’t have asked for a better therapy and absolutely must label Woodchuck’s as the best hostel on trail because it cured my debbie downer attitude. Woodchuck is an awesome dude too. 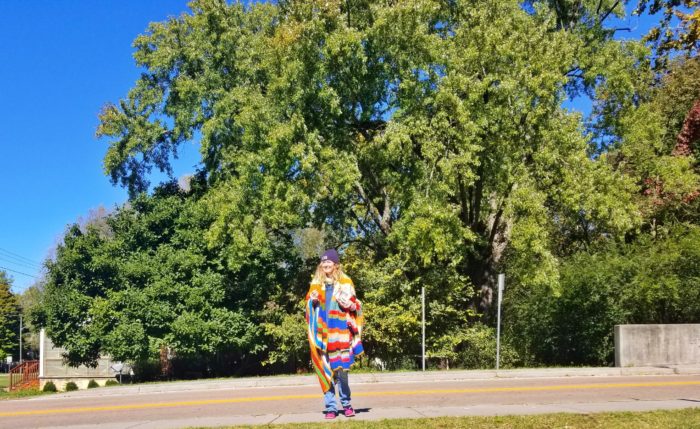 I don’t want to leave you all thinking I hated every moment of the trail, but I’m glad this gave me an opportunity to stress how hard some sections can be and not all of it is sunshine and rainbows. Apparently I have this habit of making everything appear easier than it is and I’ve been la-dee-dahing through the woods making flower headpieces and singing songs with birds and chipmunks but that is not the case.

Leaving Woodchuck’s I was completely refreshed, and ready to appreciate the trail as I had before the week of cold hit, so at 5 p.m. I headed back out there and left Virginia four miles later, crossing the Tennessee border happy as a clam at high tide. Probably happier! 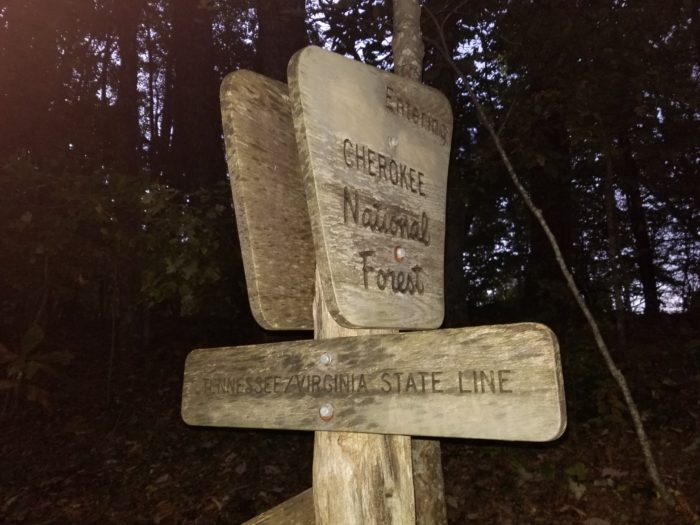