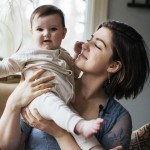 Let’s See if I Can Carry My Baby All the Way to Maine!

Hi, I’m Meg, and I’m attempting to thru-hike the Appalachian Trail—with my baby, Olive! Man, I’ve been waiting a long time to write that. I’ve been planning this trip since the new year, and even when everything became finalized in early March I still didn’t publicly share about my upcoming excursion, because it honestly didn’t feel real. The reality finally set in when I said my goodbyes and I was giving my dog a smooch and a snuggle on my way out the door. I found myself saying out loud, “What the hell am I doing?” as I was packing up the car. I’m sure you’re wondering the same. Why would I want to spend six months in the woods with my baby?

A few years ago, pre-baby, I first learned about thru-hiking the AT. The grandness of the challenge seemed fun, and I’ve always liked the sound of unique life experiences that would get me out of my comfort zone. At the time, my sights were set on van life, but I thought that a thru-hike might be something I’d like to try later. At nineteen, I traveled the country in a camper van, which definitely ignited a love for living more with much less. There’s something about taking an occasional hiatus—to spend most of your days in nature, without running water or reliable cell service—that will remind you what living is really all about. It certainly reminds you to appreciate the little things like a hot shower, warm meals, and good friends when you’re far from home.

At the end of that year, I started dating an outdoorsy guy who would tell me stories of the times his mom took him and his brother out to hike sections of the AT. Sadly, he died suddenly a couple months into us dating. A week and a half later, just before my twentieth birthday, I found out that I was pregnant. A lot of my friends and family feared that my freedom would be gone if I decided to go through with the pregnancy—and in some practical ways I knew that might be true, but not in any way that mattered much to me. Although I had no way of knowing for sure how it would turn out, I was fairly confident that the lifestyle I wanted could include a tiny buddy, and that a baby would enhance my life experiences, not hinder them.

Fast forward nine months, I finally go into labor. A few hours into my labor, in the most agonizing turn of events, my mom took her last breath two hours away. I bawled and labored through the night, and early the next morning, I met Olive. She was undoubtedly the greatest silver lining anyone could have asked for. But the conjunction of losing my mom, laboring without her there, and giving birth to this miracle baby that she’d never meet filled me with the more heartache than I’d ever known.

Amidst the deep grief, I developed post traumatic stress disorder and felt totally trapped by anxiety. I relied on my phone to distract me at all hours of the day and night, looking at a screen more than I looked at my baby most days—anything to not let my mind wander. I became extremely paranoid, skittish, and always fearful of the next tragedy that life in store for me.

Eight weeks after the birth, I spent my first night away from Olive and went on an overnight backpacking trip. I had almost no real backpacking gear and carried probably 40lbs. I repeat: eight weeks postpartum. It was hard but so invigorating, and it helped me clear my mind for a moment in a really stressful period of my life. After that, I started daydreaming that one day I might hike the AT with Ollie, like her badass grandma did with her dad, and maybe I could do some sections without her in the meantime.

In all that daydreaming, I found myself googling one day, “Can you hike the Appalachian Trail with a baby?” That’s when I discovered the Quirin family, who thru-hiked with their one year old in 2017. That was all I needed. Once I knew that it had been done before I knew that it was possible for me too, and I started devouring blogs, Youtube videos, and gear reviews. It gave me something to put my mind to, other than scrolling instagram, and something to look forward to.

Olive was seventeen pounds at the time of this discovery and not getting any smaller (she’s twenty-one lbs now). If I wanted to attempt a thru-hike, it was now or five years from now when she’ll be able to walk it herself. I figured why not at least try while I have the chance—since she’s primarily formula fed, conveniently right up to the end of the thru-hiking season when she’ll be turning one, and while she’s under twenty-five pounds.

I thought maybe it would give me the space I need, a break from pets, chores, and trivial responsibilities. It wouldn’t make my anxiety and paranoia disappear, and of course it would be hard, but it would be a challenge that i’m choosing, and one that I hope will help me feel free instead of entrapped. And surely it would provide the undistracted, quality time with Ollie that I want to have and to give her, especially in her fleeting first year.

I don’t want look back and feel like I missed an opportunity to at least try to accomplish a goal that I had long before Olive. And maybe it won’t be all that I’m hoping it will be, but maybe it will. If I’m lucky it will be the first of many times that I successfully learn to merge motherhood with the dreams and lifestyle I want to pursue. All while honoring the mountain man who helped create our little life-force, and while regaining my peace of mind and personal power in memory of my mom.