Make the time to find yourself

Two months ago, I climbed atop the final mountain on my thru hike of the Appalachian trail.  It was 2,189 miles, 151 days, 14 states, 4 pairs of shoes and 1 unforgettable journey.  I am a big picture kind of guy.  I always look for the meaning or lessons to be learned.  I have been absolutely floored by the support I have received from near and far.  People followed along as I covered mountains and valleys via Instagram, Facebook, Snapchat and texts.  Some people knew me personally; friends, family, coworkers etc.  other folks found me along the way.  Word of my trip seemed to spread one way or another to parts unknown.  As it did for most others I met along the trail.

Everyone wants to hear the stories of my hike, the good and the bad.  Fun times and hard times.  They are so curious what it’s like to thru hike.  I might as well say it out loud or in writing at least.  It is as amazing as you think.  It’s cold and hot, wet and dry, smelly and dirty. It was the most amazing thing I have ever done in my life.

I graduated college twice.  I’ve worked for work class organizations.  I’ve saved people’s lives as a raft guide (or at least so they were lead to believe.)  I’ve done so many things to be proud of.  All of those are accomplishments anyone could be proud of.  But my greatest accomplishment wasn’t even hiking 2,189 miles.  It was something even bigger.  Something that I encourage you to do too.  I chose myself.  I chose to be happy when I was not.  I was unhappy with the person I had become.  I needed to do something that challenged me physically and mentally.  I chose to accept the fact that one day I am going to die.  I chose to do something to help me become a happier and better person before that day comes.  I chose to do something people would talk about once I’m gone.  I just couldn’t continue any longer on that path.  It is up to each one of us to live our lives as happily as possible. 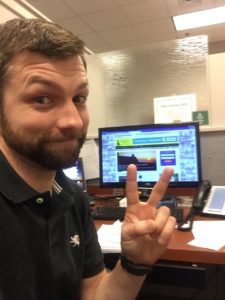 If you are unhappy with something, do something about it.  If you don’t like your spouse, work on it, or get out of there.  If you don’t like your car, sell it.  If you don’t like your job, leave.  More money will never equate to more happiness.  More money will only buy more time.  It will give you the false sense of happiness until the money isn’t enough again.  The stars are never going to align and the green lights will never line up just right.  Don’t let a sense of security keep you from being happy. Take a risk on your own happiness.  You’re worth it I promise.  But it’s up to you to do something about it.  Too many people will settle for a happiness level of 6 instead of risking it all and going for a 10 for fear of an unlikely 4.

“If you live for the weekends and vacations, your shit is broken.”  – Gary Vaynerchuk

It seems to me that the reason for the fascination people have isn’t the trail or hiking.  I believe their fascinations stems from someone that was willing to take a risk.  Hiking the trail was my escape from the unhappiness.  The escape could be anything and each person will have their own.  Maybe it’s starting their own business(which I have also now done!), learning a new skill, finding a new hobby or even traveling to new places. 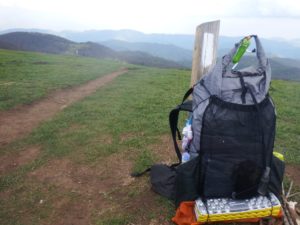 Statistically speaking, depending on who you ask, 70-80% of people who show up to the trail ready to complete the full length in one trip don’t complete it.  We are looking at this statistic entirely wrong.  Of those people, 100% of them showed up to give it their all.  How many people have claimed they wanted to complete some bucket list item and have done nothing about it?  The excuses are many.  Time, money, workload you name it.  But 100% of the people who showed to thru hike up need to be recognized for choosing themselves.  For having what it takes to put their happiness first above anything.

“I can’t just QUIT!” people say. “I have bills to pay”. I get it. Nobody is saying quit today. Before a human being runs a marathon they learn to crawl, then take baby steps, then walk, then run. Then exercise every day and stay healthy. Then run a marathon. – James Altucher

James Scott(trail name Friar Tuck) began his thru hike extremely overweight and out of shape.  His backpack was also extremely heavy.  His ride from the bus station to Springer Mountain only made it part way up the mountain before he had to hike up the road to get to the start of his actual thru hike.  His first night his tent collapsed on him several times.  His first day and first night were as bad as anyone could ever have short of getting giardia.  This was March 15th.  Slightly ahead of the bubble of northbound thru hiking hopefuls.  James hiked very slowly and as he posted towards the end of his hike months later the bubble had passed him by and the woods were quiet again.

James spent 6 months hiking from Springer Mountain Georgia to Harpers Ferry WV.  The psychological halfway point of the AT.  He ended his hike after reducing his pack weight and ramping up to 10-15 miles per day.  He also lost over 100 pounds!  The mental fortitude he must have to watch others pass him by is incredible.  James is one of the nicest people I met on the trail.  We met on a rainy day in the Smokies.  I recognized him immediately and introduced myself to him by his real name, much to his surprise.  He was moving slowly towards the shelter in a big yellow poncho he admittedly disliked.  Even in the pouring down rain he still had a big smile on his face.  His mindset on completing the trail prior to leaving is only his to know.  But he showed up and he truly gave it everything he had.  I’m more proud of him than I am of most other successful thru hikers.  He might not have made it to Maine but I know he will in 2017. 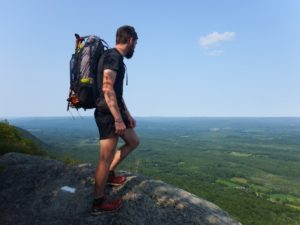 “The grass isn’t always greener on the other side.”  You’ve heard this saying, you’ve probably even said it.  I know I have.  I’m telling you, that saying is total bullshit.  If you already know the grass isn’t for you, find new grass.  Keep finding new grass until you find the grass that’s just right.  Be Goldilocks!

Sometimes taking the leap of faith is truly the hardest part.  Having what it takes to change direction later in life isn’t always easy.  I tell everyone that I speak with I wish I had done my hike 10 years ago.  But I follow that immediately with but I’m glad I didn’t wait 10 more years.  You have to make the time, because you will never find it otherwise.  It is never too late to start anew.  Choose yourself.