I know, I know.  It has been ages since I blogged. It isn’t even laziness or getting distracted by other things; this is literally the first time in three weeks I’ve stayed anywhere with Wi-Fi, a requirement for blogging for me since I’m not planning on paying any data overage charges. What’s that, I could have found a library or coffee shop with Wi-Fi? Quiet, you.

In the name of I-have-so-much-stuff-to-cover, I’m going to two-part this. The first part will be my trip from Marion to Pearisburg, Virginia and subsequent trip to Trail Days. The second will cover Pearsiburg to where I am now. Each earned a vastly different fudge stripe cookie rating.

Part One: Marion to Pearisburg

I was feeling pretty relaxed. As the week progressed, it became apparent Pearisburg was going to be the best place to catch a ride to Trail Days. I needed to average a very doable 13 mile days, and the terrain was pretty mild. In my recollection, I feel like I only walked through cow pastures. Basically all I had to worry about was not stepping in cow poop.

I passed the quarter way point in a fairly heavy downpour and accidentally took a picture making this face: 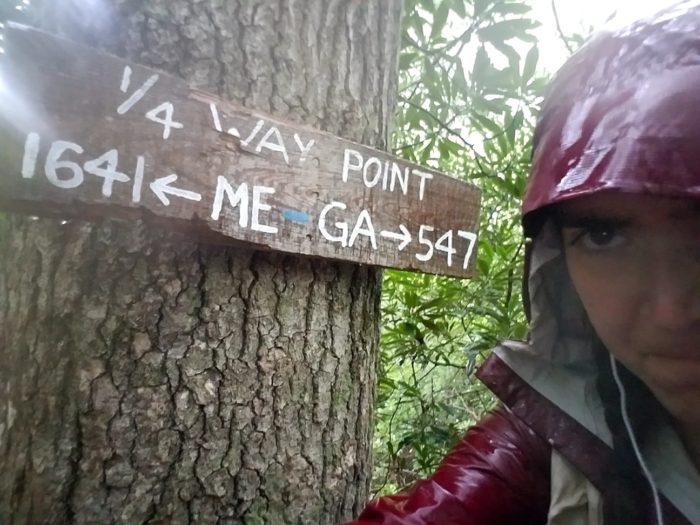 Obviously having a great time

I also passed mile 600. I didn’t see any thru-hiker fashioned mile marker and I’m generally too lazy to make any of my own. I pointed this omission out at lunch at the next shelter and another thru-hiker said, “Yeah, but from here to a thousand, who really cares anymore, you know?” Fair point. The hundred mile markers are getting less exciting.

I hiked out of Marion and was met with some pretty unpleasant rain, which fortunately only lasted for a day or two. The Appalachian trail gods then said, “Oh, you want less water?” and it got really hot. We hiked through long stretches with no water sources. They weren’t actually bad water carries at all, just stretches of 10-12 miles without water so for the first time I actually did have to think about it. Up until that point, I carried a liter of water and filled up at the next source when I ran out, which was generally within a mile or two.

It was also insanely buggy. Bugs like to fly directly next to my eyeball, for which there is possibly some scientific reason besides “it really annoys Becky.” At one point, a bug got a little too close and drowned in the puddle of sweat pooling under my eyelid and I hiked around with a dead bug on my face for who knows how long before another hiker awkwardly pointed it out to me. The worst thing about being the earliest hiker each day is that you have to cut through all the cobwebs that have been built across the trail overnight. I was still getting face fulls of them at 2pm when I knew there were multiple hikers not that far ahead of me. I also would find a number of silkworm and millipede stowaways every time I took off my pack and I was regularly going to sleep with 4 to 5 spider friends crawling around my tent.

One particularly hot day, my friend Cantaloupe and I hitched into Bland just for a blizzard at Dairy Queen, and then hitched right back out. 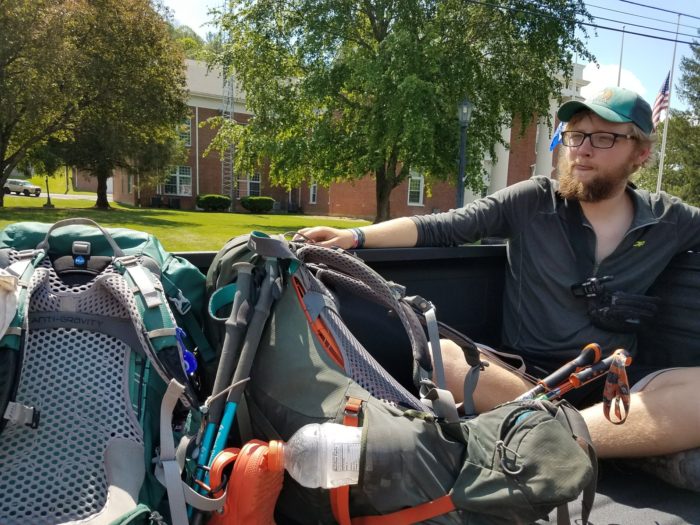 MVPs of the Week

I stayed at two of my favorite hostels so far, the Quarter Way Inn and Wood’s Hole Hostel. Both offered amazing communal meals (I’ve been having literal dreams about Tina’s rice pudding ever since I left the Quarter Way Inn over a hundred miles ago). I reached both after taxing days of hiking: I stayed at the Quarter Way Inn after passing through the quarter way point in the rain. I walked into their mudroom so soaked it felt rude to enter the house and find the owner while dripping everywhere. Tina eventually found me there wringing out my socks and babbling incoherent apologies for all the puddles I was creating with my presence. She looked me up and down entirely unfazed, turned on the dehumidifier in the room and went to fetch me a towel. She also had the cutest hostel dog, Hazelnut, and every single hostel has a dog so that’s some stiff competition.

I walked into Wood’s Hole after a 19 mile day in 90 degree heat. I had stopped several times that day to soak my shirt in creek water (downstream, always downstream) so I could have a 15 minute reprieve from the heat before it dried up again, and so I arrived possibly the most disgusting and sweaty I’ve been as of yet. I drank one of their famous smoothies while in the shower and it easily could have been my highlight of the week. The dinner and breakfast I had there were the bomb. They also have adorable animals everywhere (including pigs!). 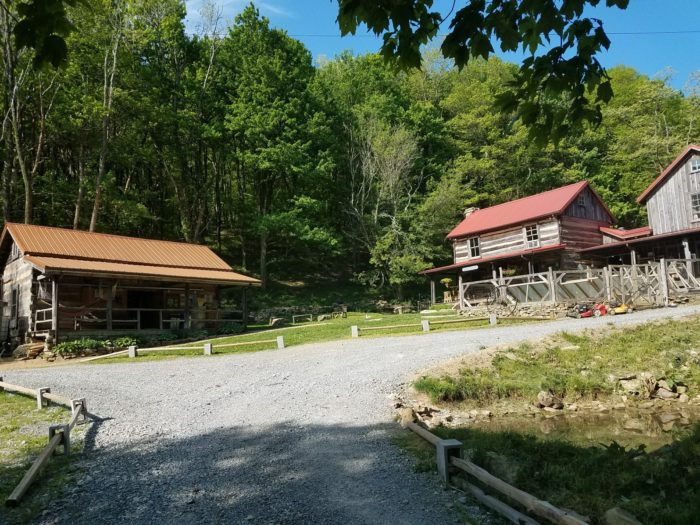 But the best part of both places was the group of hikers that were there. Maybe it was the communal meals served at both, but everyone was chatting and friendly with each other regardless of whether they had met on the trail before or not. At the Quarter Way Inn, I met a 2002 thru-hiker named Hammock Hanger, who was doing a sobo section hike into Damascus for Trail Days. I’m always amazed by how therapeutic it feels to talk to someone who’s done this all before and also amazed by how kind, unpreachy and empathetic past thru-hikers are.

I’ve been ignoring this section as of late because sometimes it feels like there is too much trail magic to keep track of. That week, with so many past thru-hikers coming back into the area for trail days, there was trail magic everywhere. I came into Pearisburg with tons of food left over since so many of my meals were being covered by food waiting for me in every gap.

For those unfamiliar, Trail Days is a hiker festival held in Damascus every year, timed for when the biggest bubble of North bounders hits the area. We got a ride on the free shuttle from Pearisburg  (thanks ATC!) and set up our tents in tent city Friday afternoon. I was eyeing a new pack, and immediately began hitting gear raffles aggressively, of which I won none despite the carefully scheduled list of them I’d  written on my hand to maximize the number I could enter.

But I got to see a number of people who are hundreds of miles up or down the trail from me. It was basically a weekend of everything from heartfelt reunions to “hey, remember that dude?” 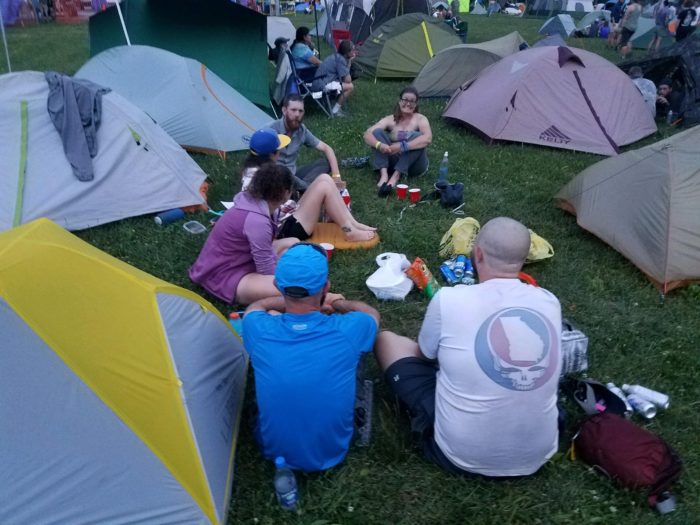 Saturday hosts the hiker parade, where past and current thru-hikers walk down Damascus’ main street in weird, thrift store concocted outfits to be super soakered by the town’s slightly over-enthusiastic residents  (because we’re thru-hikers and need a shower, get it?). It had been a hundred million degrees all day and I had spent most of the morning sitting in shady corners of town, trying to rehydrate after Friday night’s activities while the sun shriveled me like a raisin. Just as the parade turned the corner onto the parade route, the skies went from a blazing sun to a total downpour in half a second and we were soaked before we reached the first super soaker. It was kind of a magical moment. I could see bolts of lightning striking the mountains around us, the mountains we would normally be on, but instead we were being hosed off by kids who were just as wet as we were while their parents stood anxiously under awnings, looking up at the sky. 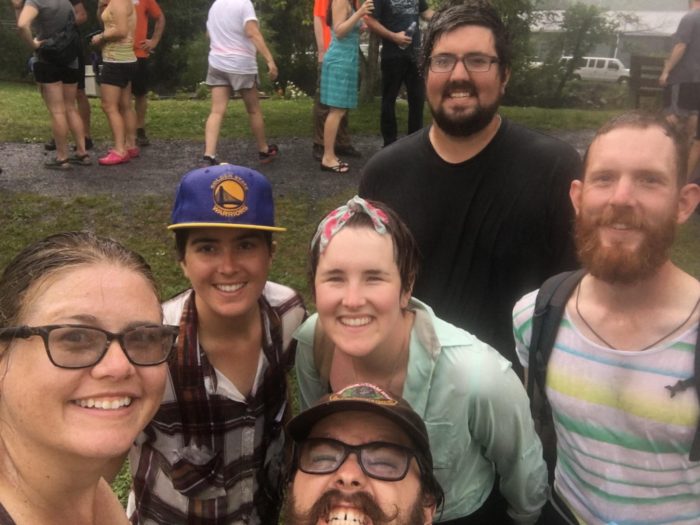 On Sunday, I said some sad goodbyes to a lot of hikers I may not see again, with so many miles separating us. A thru-hiker named Silky and I decided to hitch back to Pearisburg as there wasn’t actually a free shuttle to take us. We were a little nervous as it was a two hour drive and not like most hitches, where you’re hitching down a road the drivers are going down anyway.  We made a sign and were sort of preparing for a long haul. 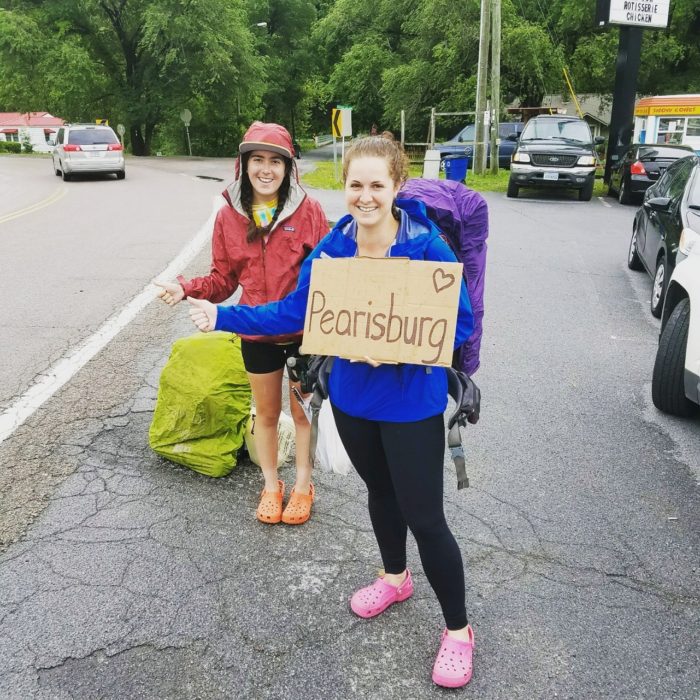 Who could resist those crocs?

My friend Marco timed us. It took less than five minutes before a couple who had thru-hiked in 2016 stopped for us. They were only vaguely going in the same direction we were, but they dropped us off in Pearisburg regardless. I fell asleep on my pack on the car ride and returned to Angel’s Rest Hiker Hostel where the same group of hikers from Thursday night had also returned, continuing the Harry Potter marathon that had been started before we’d left.

I’m always a little nervous to score anything too high or too low, as there’s a lot of hiking left to be done and I like to leave myself some room. But this was a fantastic week. I give it 9 out of 10 fudge stripe cookies.