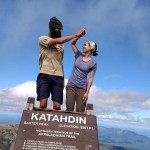 Leaving Albert Mt, we headed down into our first zero in Franklin, NC.  From there, the trail goes up to several balds, Siler, Wayah, and Wesser before dropping down several thousand feet into the Nantahala Gorge.  Getting back out of the gorge requires a 3,000 ft climb over 6 miles up to Swim (no view) and Cheoah bald.  Jacob’s Ladder is a steep climb out of Stecoah Gap but then there was a gradual descent down to Fontana Dam.  Here, we entered Great Smoky Mountains National Park and the next many miles we’ll be crossing back and forth from NC to TN.  It’s steep getting into the park but then the trail stays at a higher elevation and follows the ridgeline, mostly.  Rocky Top was a pilgrimage of sorts since we’re both orange blooded University of Tennessee alumni!  Siler’s bald offered a distant view of Clingman’s Dome and eventually, we made it there!  Clingman’s  (6,667 ft, mile 199.5) is not only the highest point in TN, but also for the entire AT!  (All downhill from here, right?!)  Mt Love is technically at 200.1 miles but is a non-descript point downhill from Clingman’s. 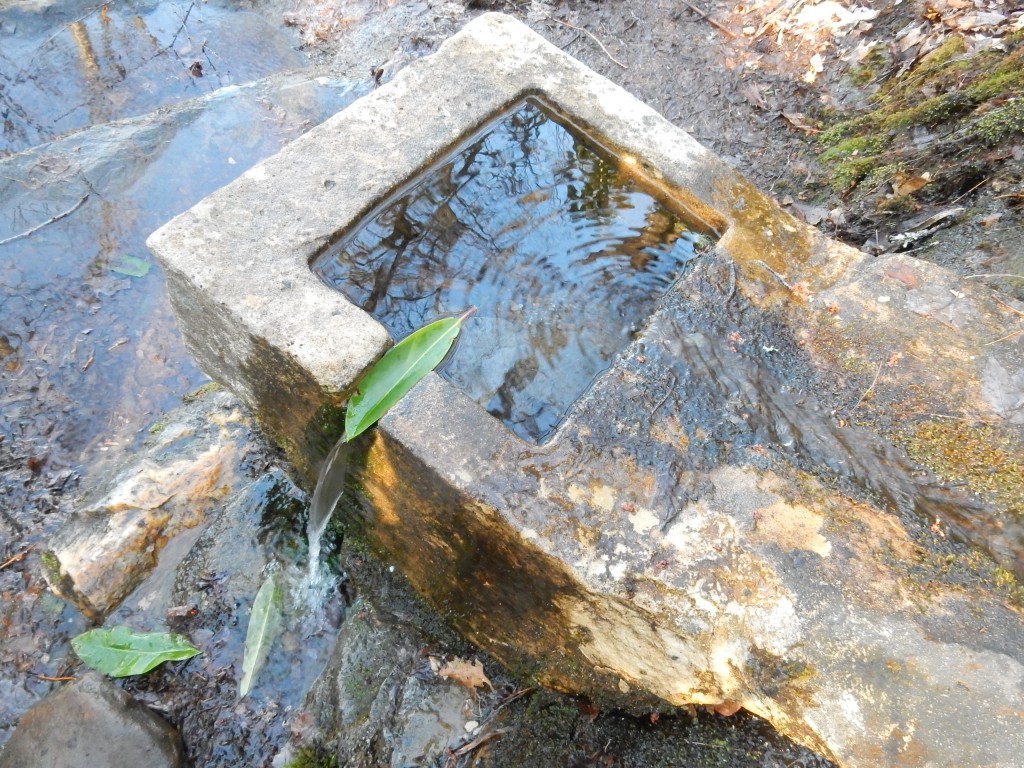 Stone Cistern. Bonus homework question for the Sproles Kids: What is a cistern?? What was it used for? When do you think this one was built? This is on Wesser Bald in North Carolina. Please share your answers in comments!

I love collecting water on the trail. The trail follows the ridge line, so most of our water sources are springs coming directly out of the ground. There is nothing like walking on top of a dry ridge, then following a sign 0.2 miles downhill to find a spring of crystal clear water. We pass several springs each day, and camp near a spring every night, and I always look forward to seeing what the next one looks like. Some have a small PVC pipe laid in the spring so you can fill containers just like from the tap! Other times we’ll use a leaf to funnel water into our bladders, or just catch it from a cascade. My favorite thing about collecting water is that it reminds me of the story of Manna in Exodus. It is plentiful, and each day we are provided with a new source to drink from. Sometimes we are tempted to collect more than we’ll need, but then we just end up carrying extra weight, because there is always more water! Since we treat our water with tablets instead of pumping or squeezing it through a filter it’s not a chore at all, but a time to recognize one of the ways God provides for us. 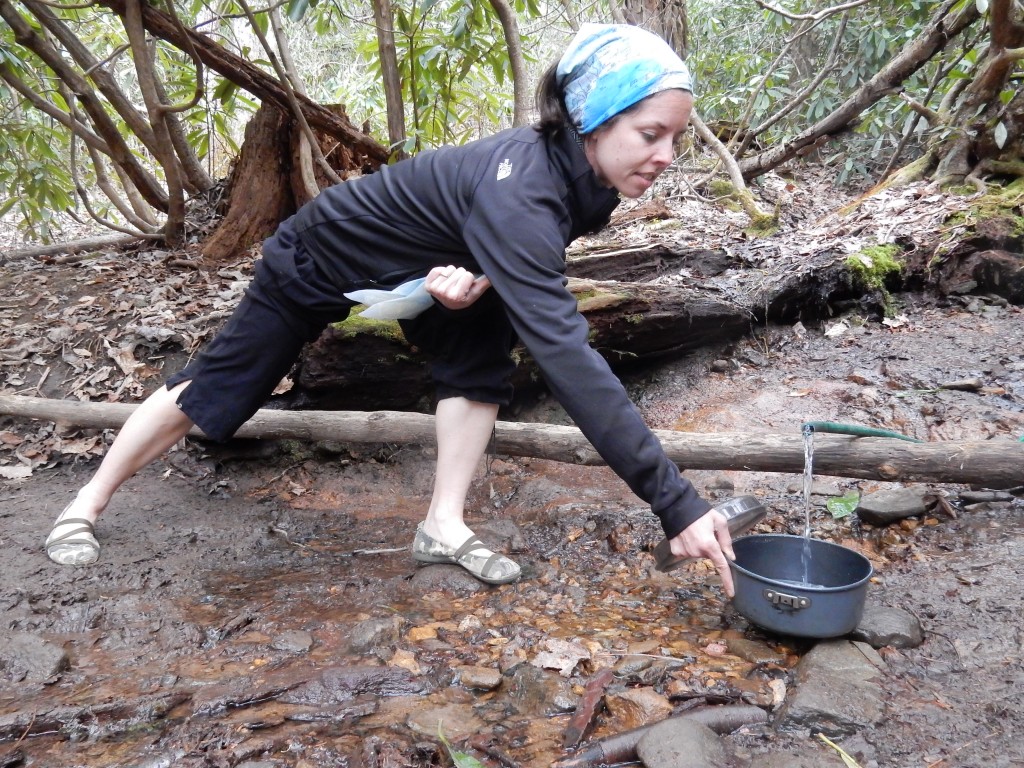 There are no Trolls on the AT!  In preparing for our trip, I did a lot of reading online in forums, blogs, etc, and got the feeling that everyone on the AT would be arguing about whose filter, stove, tent, pack etc was the best and lightest version. I was pleasantly surprised to find that not to be the case! It feels more like we are all on the same team, and all going in the same direction! After the first few days on the trail, the facade that anyone knew what they are getting into wore off, and people started sharing questions and helping each other out. One night a hiker came into the shelter where we were staying soaking wet with a pack soaked through, including his sleeping bag. Once we all saw him, we gave him hot food, warm dry clothes, and sleeping bag liners to sleep in. It was amazing to see how it all came together, even though theoretically no one was carrying ‘extra’ gear.  Living outside humbles us to the point we don’t feel like proving ourselves to anyone. It’s enough to survive and make progress northward each day.

We took our first zero day in Franklin after hitting the 100 mile mark.  Our stay in Franklin was loaded with trail magic!  When we got to Winding Stair Gap and had to find a ride 10 miles to the east.  Luckily, trail angels rose to the challenge.  Beverly Carini (awesome trail angel with her cell phone number published in AWOL’s guide) was there loading up a crew when we arrived and she called Dave Watters, a 90 year old man retired from NASA that section hiked in the 1950’s.  He loaded up 5 thru-hikers in his Jeep “shuttle” and took us to our various hotels/hostels and then picked us all back up to go to the Asian King (all you can eat buffet for $10).  Also, the hiker box at the Microtel was a treasure trove AND to top it all off, the local hiking club threw a “Hiker Chow” at Lazy Hiker Brewing Co. to feed hikers!  They provided free live music, a variety of homemade chilis, baked goods, fruit, hot dogs, etc.  Franklin is a great trail city!  Lastly, Andrew’s Aunt Trish came to visit us on her spring break!  She hung out all weekend and helped us run errands, took us out to dinner, etc.  We had a great time in Franklin. 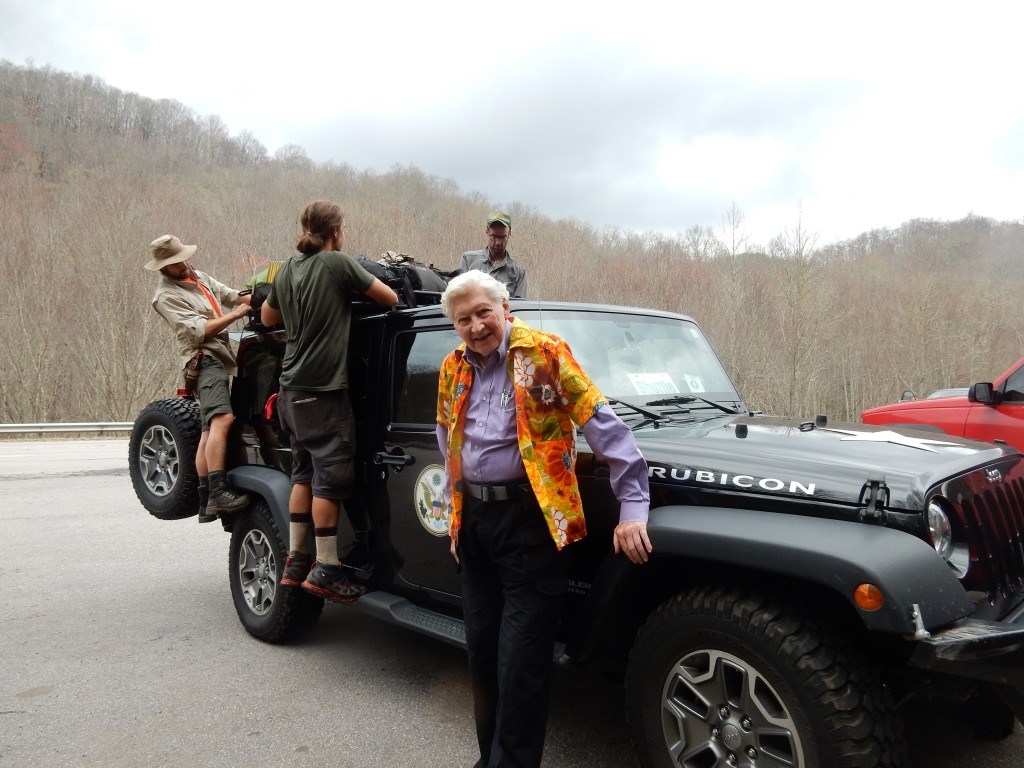 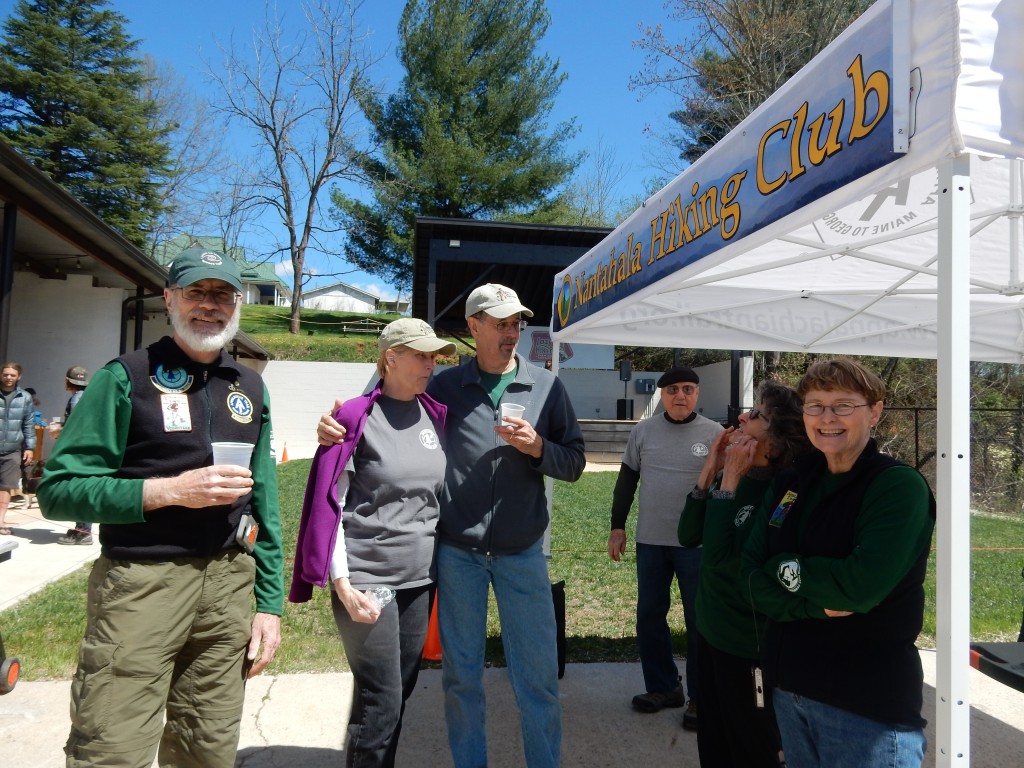 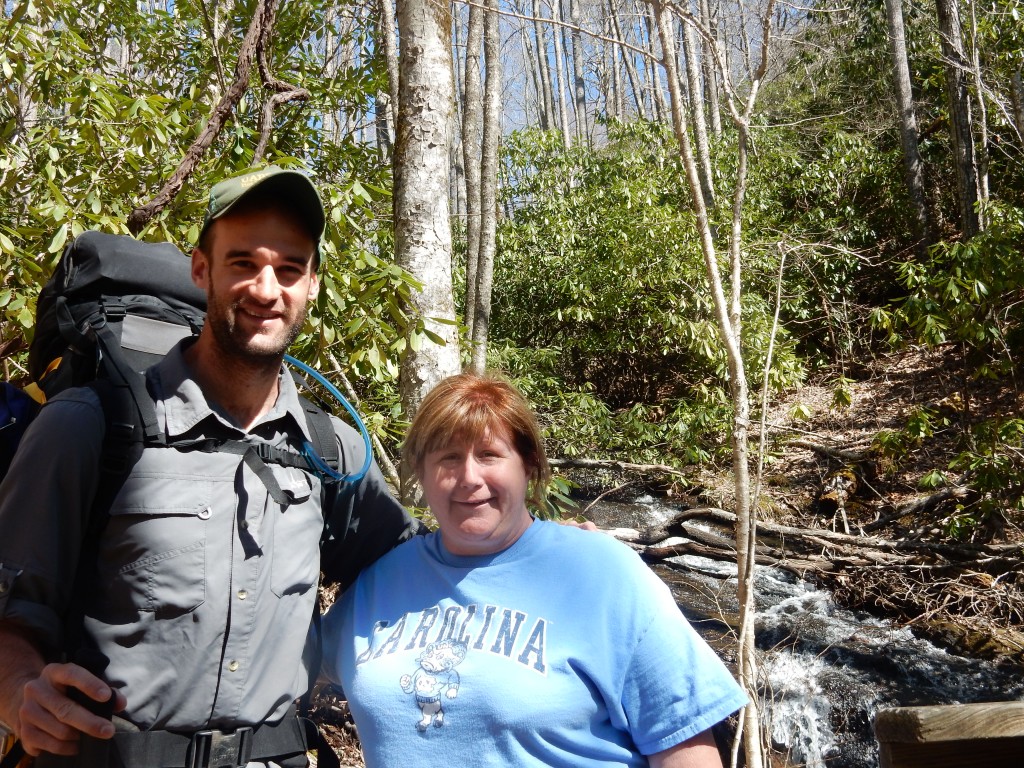 Aunt Trish came to visit and hiked part of the trail on her spring break.

Many of the balds offered 360 degree views.  Spring is starting to make an appearance and the wildflowers are blooming like crazy.  Met a German hiker named Gentle G and got to practice my German all day!  He said there was a documentary about the AT produced in German and it has since become a more popular destination.  This section we hiked a lot with Steve, Ben, Ray, The Momma and The Poppa, Ryan, and met up with Tortuga again.  We were also with Stumble, Shovel, and Monkey for a while. 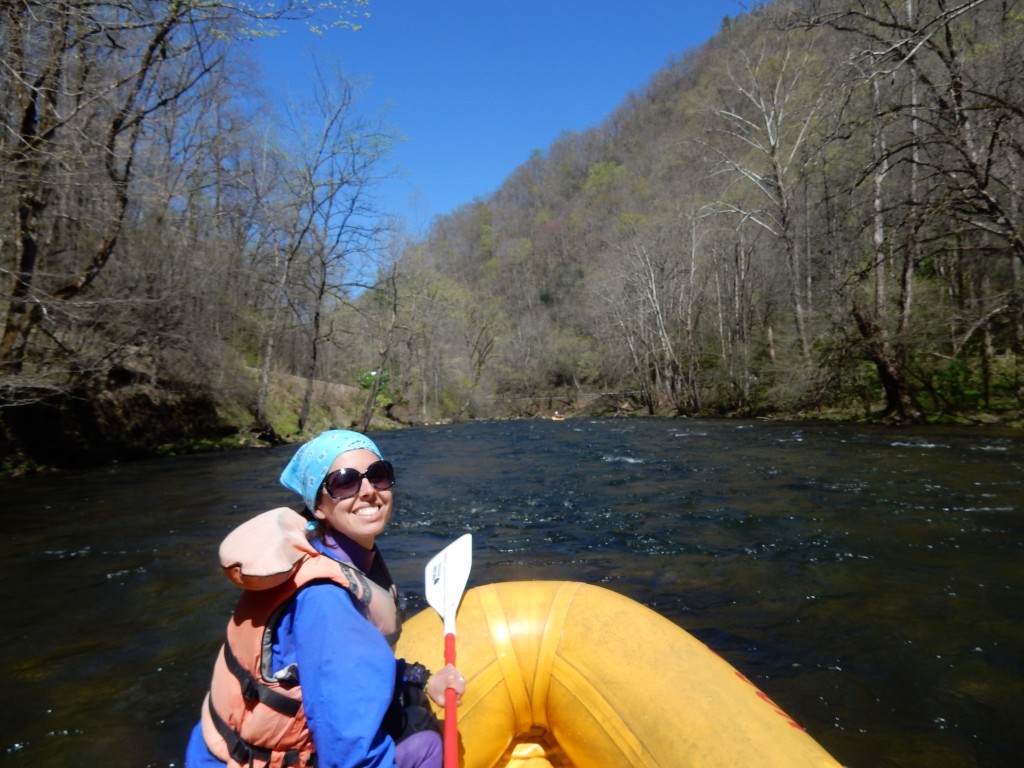 Rafting at the NOC was definitely a highlight for us!  We could see the white water down below and spontaneously decided to check out the rafting options.  We have both kayaked the Nantahala in the past so we felt comfortable renting an unguided raft for the afternoon.  We did 8 miles of class I, II, and III rapids.  Andrew successfully guided us down Nantahala Falls, the class III rapid that concluded the trip.  The water was ice cold but it felt good to soak our feet for a few hours.  In order to take a hot shower and hang out before the big ascent, we stayed in the bunkhouse and hung out by the river all evening.  A college group was leaving the same day we were there and they left all of their food for the thru-hikers!  Cookies and milk before bed, oh yeah!  Cream in my coffee… it was like paradise. 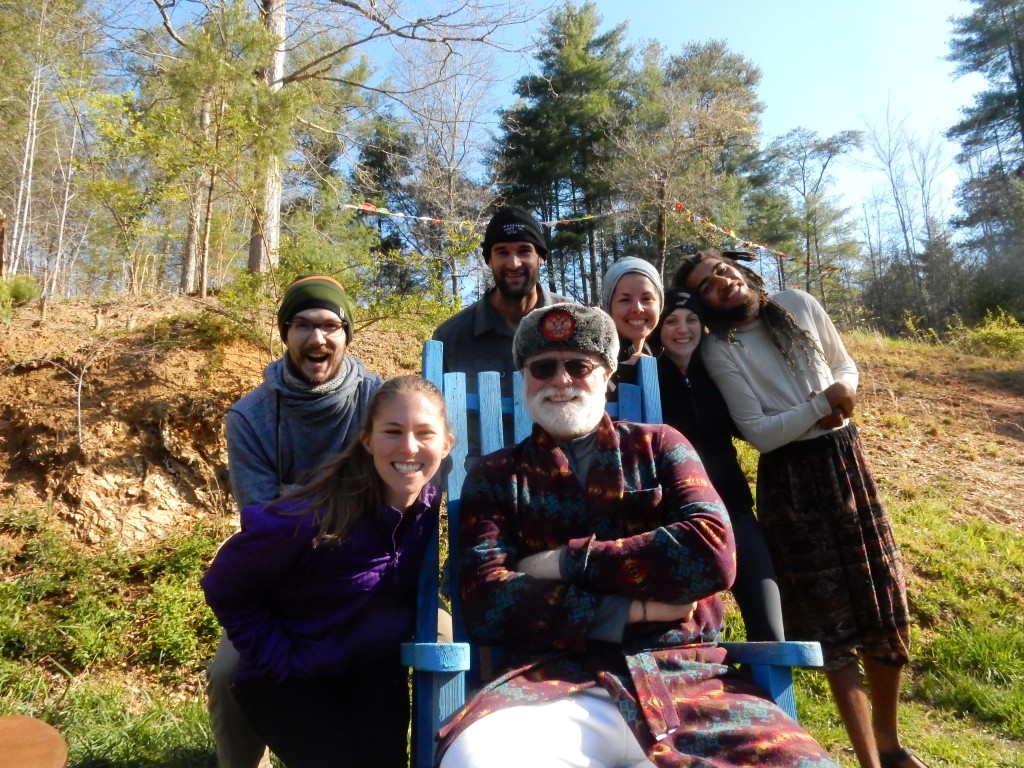 Lots of luxury during this section!  On Day 17 we made it to Fontana Dam.  We could see the lake for several miles before reaching the shore. Our friend, Jeff Davis, owns some amazing property in Happy Valley which is surrounded by the National Park.  He picked us up and gave rides to a few people then took us and our friend, Forrest, to his house.  Unfortunately, we didn’t realize that the tail of the dragon lay between us and his house… 318 turns in the road in 11 miles.  Being from Oklahoma, Forrest was barfing out the car window.  Once we got there, it was totally worth it!  Jeff, being a 7th generation Louisiana man, knows how to cook authentic Cajun food!  He taught Andrew how to make 2 kinds of jambalaya, gumbo, and crawfish pie.  I baked a lemon pound cake and Lizzy brought salad and peach cobbler.  Lisa provided vegetables.  What a feast!!!  We slept in his bunkhouse which he uses as part of a Buddhist retreat center. Jeff has donated some of his land to the creation of the retreat center, which you can learn more about, donate to, and even arrange your own overnight visit at https://www.mocd.org/index.html.

Lisa made us pancakes in the morning and we loaded up 6 people plus packs in a Prius!  Nick, Lizzy, & Lisa (our friends from Knoxville) took us back to Fontana Dam and walked us straight into the Great Smoky Mountain National Park.  They day hiked with us up to a fire tower.  It was by far the coldest, windiest day but the sky was blue and the sun was shining.  What supportive friends we have!

The Smokies have been amazing so far.  It’s a tough hike in but the scenery is spectacular.  The shelters are really nice; they have fireplaces!  The open wall has been covered with a tarp for the winter so they’re relatively warm and cozy.  There are strict rules in the Smokies in order to preserve the most visited national park in the country.  Oh yes, and I can’t forget the snow and ice!  There’s still quite a bit on the ground in sections and it has been colder than any other point during the hike. 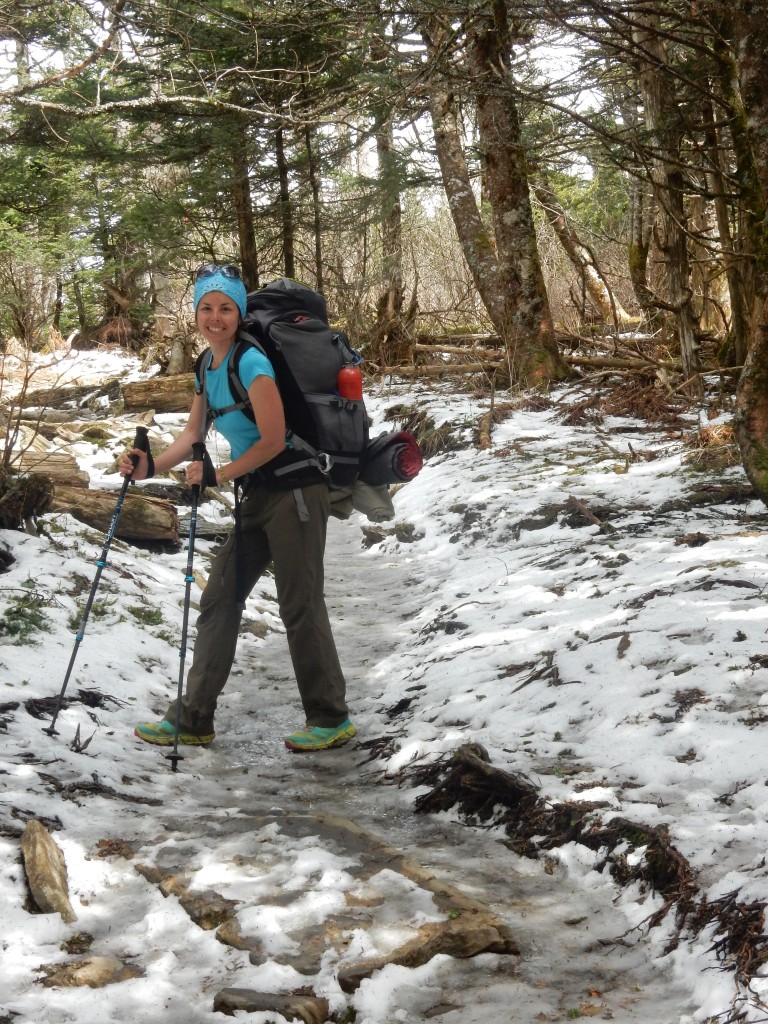 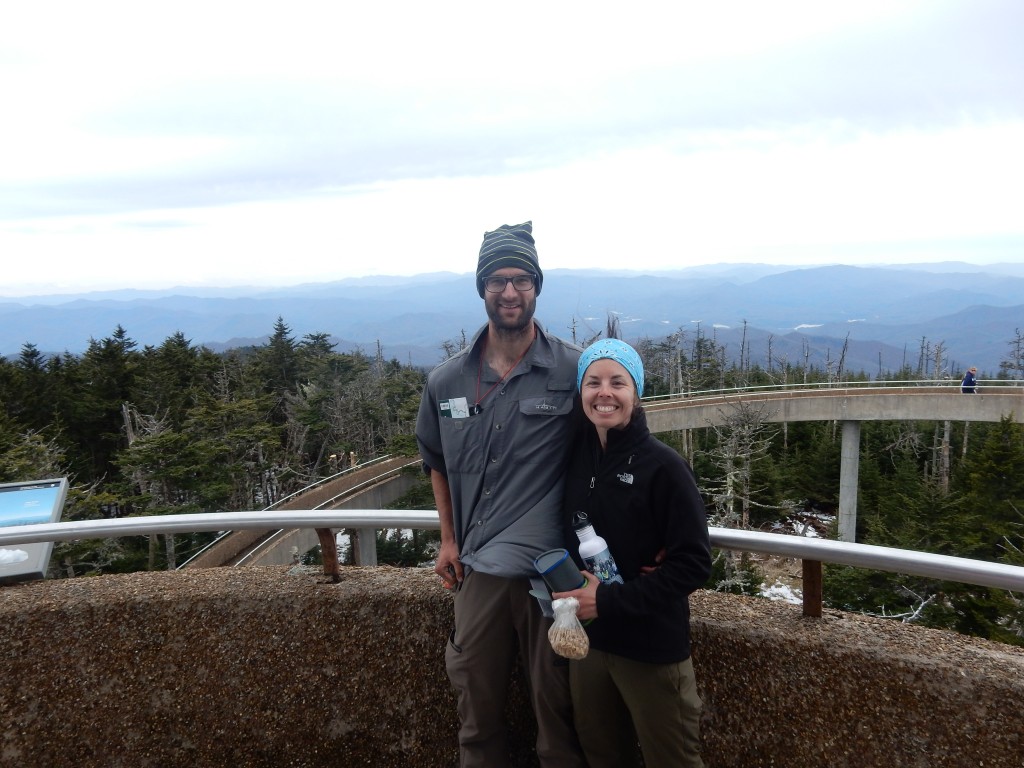 Since we didn’t have a resupply box in Franklin, Andrew & Aunt Trish did some shopping.  They returned with LOTS of food… for this recipe, we took our leftover Carolina BBQ and boiled it with 4 cups of water.  We added 2 packs of Ramen noodles and 1 pack of pork Ramen seasoning.  It was so good I would seriously make it at home with BBQ leftovers.

Claudia… or Little Rhino… was hiking a bit faster than Lollygag (How did he get that name?) and heard some scurrying out of a rhododendron bush up the hill, west of the trail.  A large, black animal came out of the bush, at first appearing to be a bear.  Boars are arguably more dangerous than bears so it wasn’t really a relief to see that it was a boar.  Luckily, it showed no interest in eating Little Rhino and went about it’s destruction.  Lollygag got there just in time to see the massive figure on the horizon.

The Goldfinch by Donna Tartt (it won a Pulitzer for a reason… so good!) and Field of Prey by John Sanford

One of our main topics of conversation (when we’re not singing Rocky Top) in the Smokies has been reflecting on a line from Elizabeth Barret Browning that our pastor Preston Clegg quoted in the last sermon we heard before we left Little Rock:

“Earth’s crammed with heaven,
And every common bush afire with God,
But only he who sees takes off his shoes;
The rest sit round and pluck blackberries.”

We are stuck on the first two lines. . . It is eye opening to look at one specific tree and try to wrap your mind around the idea that it is ‘afire with God’. . but when you see hundreds, thousands of trees every day it goes beyond words. Preston also said “think of us every time you see a tree”, and between that and the quote above he is really in Andrew’s head. 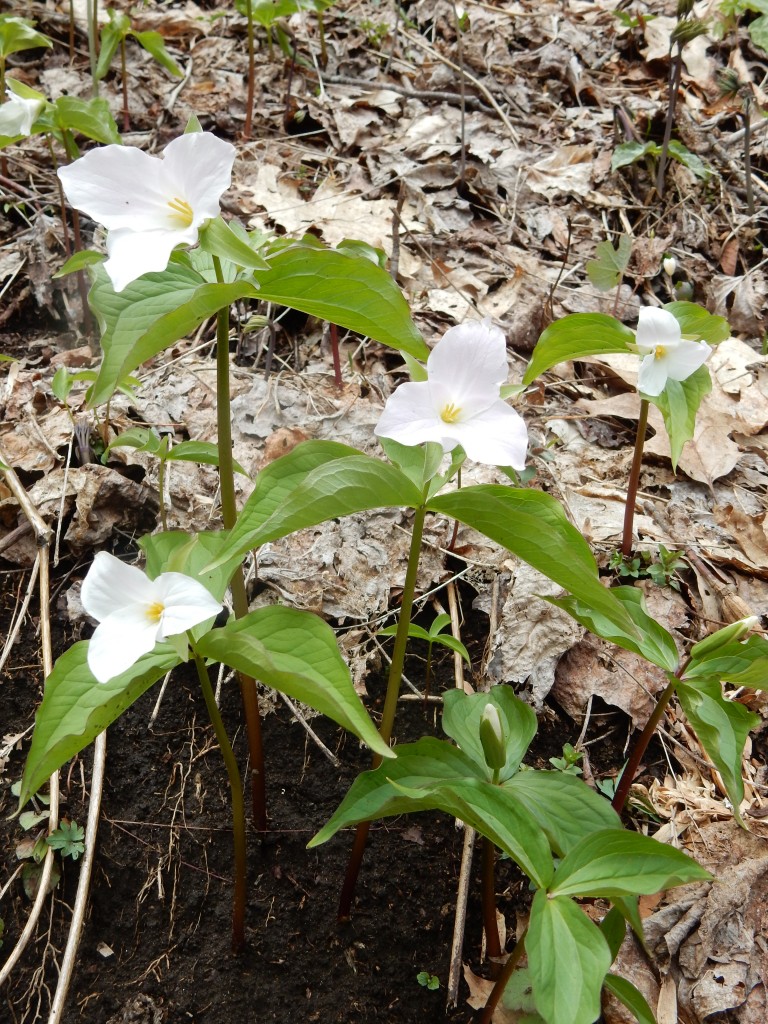 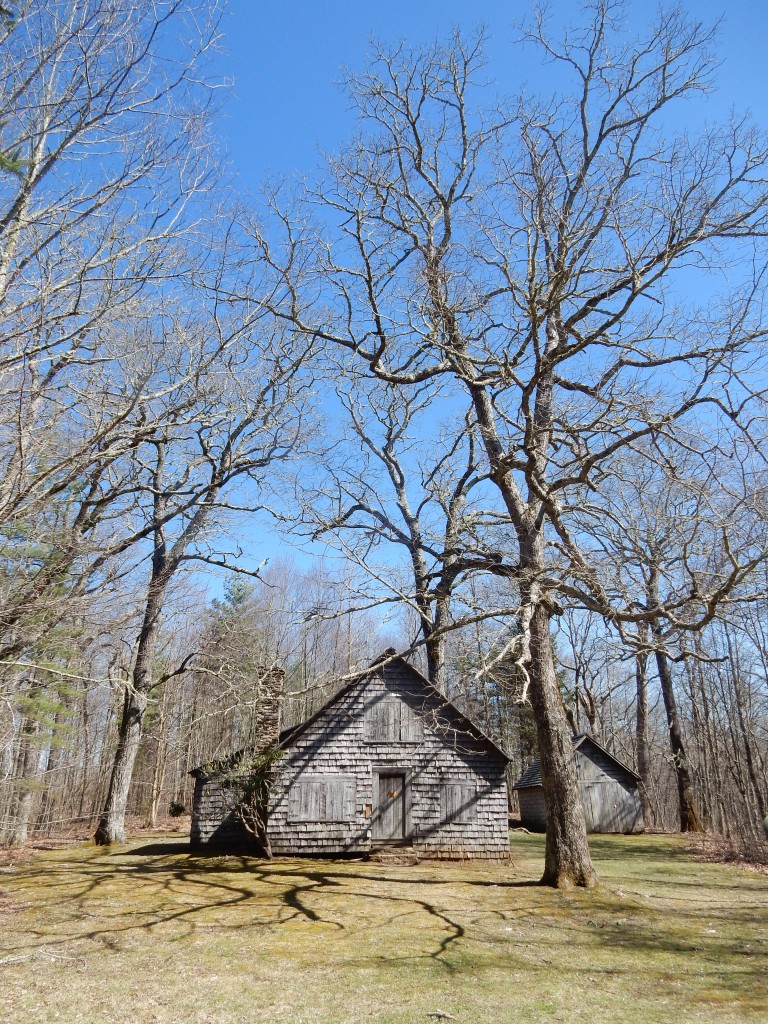 AT Class of 2016! We loved life on the trail and didn't stop there. New Zealand called and we spent 3 months volunteering on local farms and hiked many trails on both islands. We've settled back in Arkansas where we have section hiked the Ozark Highlands Trail, Buffalo River Trail, and plan to section hike the 200+ mile Ouachita Trail in 2020. We also provide nutrition consults for hikers with our site Charge the Trail: Nutrition for Long-Distance Hikers.