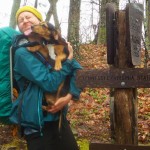 A lot happens in a week on the trail. Here are the highlights and low lights of my first week back since last year’s attempted thru-hike.

I started here. With a cold. I littered the next 90 or so miles with snot rockets. 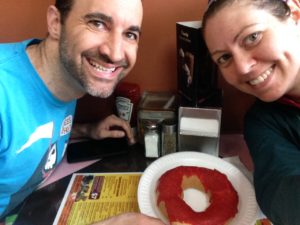 Thanks for driving me to the trail from DC, Jason!

I Bestowed a Trail Name

Jesse appeared in the Morgan Stewart Shelter mid-day on a rainy day. We bonded over our common thru-hiker turned LASH-er experiences, and a shared awe of the most beautiful mile of the AT (which isn’t on the AT); the Mau-Har trail. 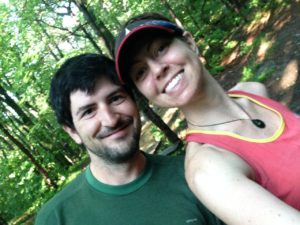 Jesse earned the name Big Ups! in reference to both his use of the expression (It’s like a “shout-out,” or a public recognition),  and how we started referring to the steep inclines on the elevation map. “How many Big Ups before the next shelter?” The other trail name contender was Onion Buzz. That one is just fun to say.

When he mentioned the year of his thru-attempt (2006) he randomly declared “I’m much older than you” without knowing my age. He is younger than me by several years, but there was no need to correct this weird statement.

I took an incredibly refreshing icy-cold outdoor shower at the Native Garden Center near the Appalachian Trail Railroad Station Stop, and Dave from NGC offered Roan & I a ride to Tony’s Deli. I won a Vanilla Coke there after correctly identifying the movie “The Money Train” from a still image of J-Lo, Wesley Snipes and Woody Harrelson (Bonus: I’ve never seen that movie). Tony’s made the 2nd best fish & chips I’ve ever had in my life, and that’s not just the onion buzz talking. (The 1st best was in Wellington, New Zealand.) The NGC used to let hikers camp there but some jerk hikers ruined it by acting up, so they don’t do that anymore. Good job, jerks.

He’s from Barrington, RI and therefore knew about Seekonk, MA. He also randomly declared that he was “a lot older” than me. Wrong again, dudebro. I didn’t correct him, either, but now I’m super curious – what are these grade school-style, unprompted hierarchical age declarations all about?

Later that night when I was in my tent I overheard Barrington hiker say “If a girl starts at Springer alone and she’s still alone by VA, there’s something wrong with her.” Interesting that he didn’t choose to make that declaration while I or the other solo female hiker at the shelter were present. I should have aimed a snot rocket inside his boots. Ah, regrets.

The goal is to do stand-up in every state. I told a few jokes to Big Ups, Ken and Don at the Wiley Shelter. Ken and Don were two friends doing a short section together with Ken’s dog, Honey. They were funny and great company for the evening. I wasn’t really into doing comedy that night, and it was meh, but it still counts. I was glad to be done with New York. 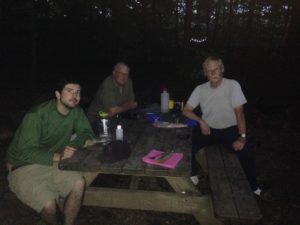 “New York audiences are the best!” 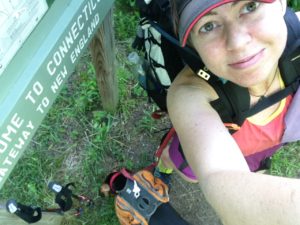 I easily caught a hitch in from a lovely German Anthropologist who had done a lot of hiking and climbing in Bolivia. The librarians invited Roan inside to sit beside me while I did my blogging.  A family with a large house used to let hikers camp on their lawn but stopped because hikers left trash and didn’t pick up after themselves. Good job, jerks. I caught an easy hitch out from a pipe-smoking retired toy store mogul. Roan and I sat in the back because the front seat was occupied by a tupperware container of pipes. Everyone was lovely.

Kent was the last place I saw Big Ups. He stayed in town and I hiked out. Hope you’re still on the trail, homie! 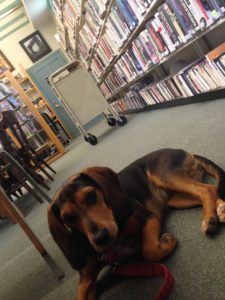 I happened to venture into the town of Falls Village, CT at the same time as two hikers named Packs and Sin Nombre. We all stopped at The Toymaker’s Cafe and we all had really delicious cheeseburgers made from a local organic source. I’m tempted to say it was among the best in my life, but honestly, I don’t have a memory of another really good cheeseburger, and if I did say that you might not believe me about the fish & chips. And I need you to believe me about the fish & chips. It’s important.

Sin Nombre: “It’s so good because the cow had a name”

The owner also came out and fed Roan some bacon, so big ups to Toymakers to being dog-friendly.

A Podcast Maybe Saved My Life From Raccoons

I woke up in my tent one night and heard slow rustling. It could have been the sleep haze but I thought I heard mouth sounds, too.  That was not a good time to realize I had not followed bear protocol (e.g., make a triangle with sides of 50 feet for each location where you camp, eat and store food). Roan was asleep inside my top quilt and stayed that way while I prayed to a God I don’t believe in. That’s a reflex for atheists who were raised Catholic and are terrified to find themselves inside what feels like a nylon coffin. I turned on a podcast called “The Dinner Party Download” to start some noise. I picked this one because bears don’t like the noise of human voices, and they hate showing up to dinner parties without bringing something, so it’s a double whammy. After 15 minutes the rustling seemed gone, so I stayed awake for the next two hours. The next morning there were no paw prints anywhere so it was probably just raccoons or some other non-terrifying animal that doesn’t like showing up to dinner parties without at least a bottle of wine. 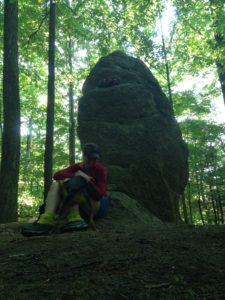 Stay tuned for highlights from Week 2 and find out how I got lost!

Connect in the comments below or on Twitter, IG and Snapchat: @hanleybadger