Hey all, currently enjoying a beer and recovering from the first real all-you-can-eat buffet experience of the hike in Hiawassee, Georgia  (thanks Daniel’s Steakhouse!).

37.9 since my last check-in, bringing the total to 69.3 (plus the 8.8 of the Approach Trail; eventually my total miles will be large enough that those 8.8 miles will seem like a drop in the bucket not worth mentioning, but I’m not there yet).

We came out of Neels Gap to much better weather, still chilly but warming up as the week progressed. All the people I zeroed with in Neels stuck around and are now smushed into a new hotel room with me. We got a late start out of Blairsville, but got 7 miles done.  We had plans to do 11-9-11 mile days into Hiawassee, but realized that if we dawdled a little we could avoid some rainy nights camping, so we did 11-7-9-3 instead and rolled into town around lunchtime today ready to eat all the food. 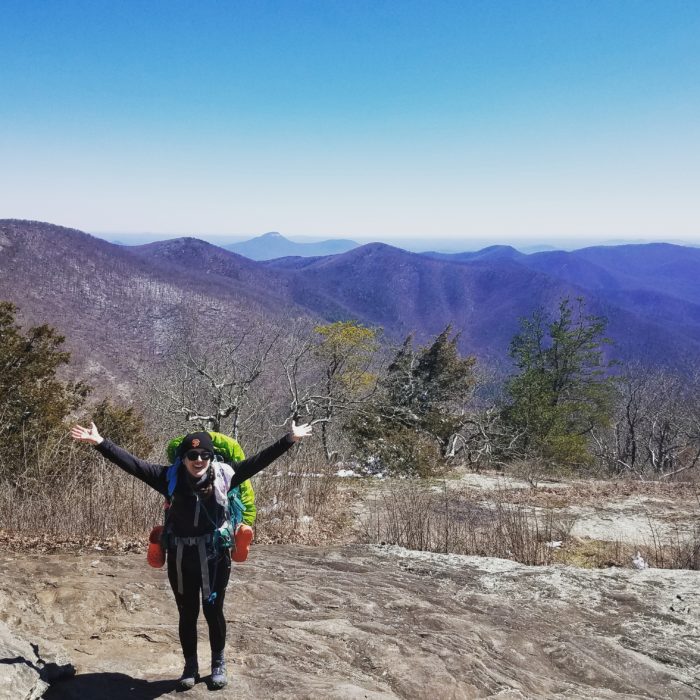 It’s really amazing how much better life is on the trail when there’s no snow or blisters, so the week had a lot of highlights. But that 7 mile day (from some unnamed tent site to the cheese factory site) was the kind of day I had fantasized about whenever I thought about hiking the trail. It started out with some rain, and I was so relieved to be prepared for what the trail was now throwing at me weather-wise that I was packed up and ready to go before the rest of the group had even rolled out of their tents (I even successfully did that thing where I took down my tent while under my rainfly so it stayed relatively dry).

I walked alone in the fog for awhile, so happy I wasn’t chugging through snow. The sun started peeking out around noon, right around the time the group I’m hiking with came into Unicoi Gap, where some pretty epic trail magic was happening. Two separate groups had set up barbecues and there was mac and cheese, nachos, fresh fruit, chips, soda and brownies. We spent a good two hours there lounging in the sun. We haven’t been staying at a lot of shelters, so we got to spend some time chatting with other thru-hikers who have been. We stayed until they started packing up, then rolled out of the gap with much fuller bellies.

Gaps are literally gaps between mountains, so anytime we see one on the map, we know we’ll be going into it with a lot of downhill and walking out of it with a lot of uphill. It’s usually where the group stops and catches up to each other after slowly spreading out over the previous couple of hours.  That gives us some time to get a snack, drink some water and, in my case, take off my shoes and socks and make sure all blister protections are still in place. We sprawled out in the next gap after Unicoi (the morbidly named Indian Grave Gap) at about 3:30 with only a mile left to go. We sat for about 10 minutes and were just packing up to head out when a car came by and startled us, prompting several jokes about serial killers. The car promptly slammed on the brakes and reversed to us, giving everyone in our group a heart attack, but it turned out it was just a passerby with some beer in his truck and the thought that some hikers might want it. We promptly dropped our packs and polished off the beer with the help of hikers from Germany and Atlanta we had met two minutes before. We spent about another hour in the sun before trudging up the last hill with cheap beer sloshing around in our stomachs.

We got to camp that night at around 5 pm, later even than the day before when we had to hike four more miles.  This prompted our new group name, the 9-5’ers, because no matter how far we have to hike, we always seem to finish at around the same time. We’re pros at laying out at every view and sunny spot, and have been enjoying watching groups trying to stretch to 15-20 mile days trudge past. 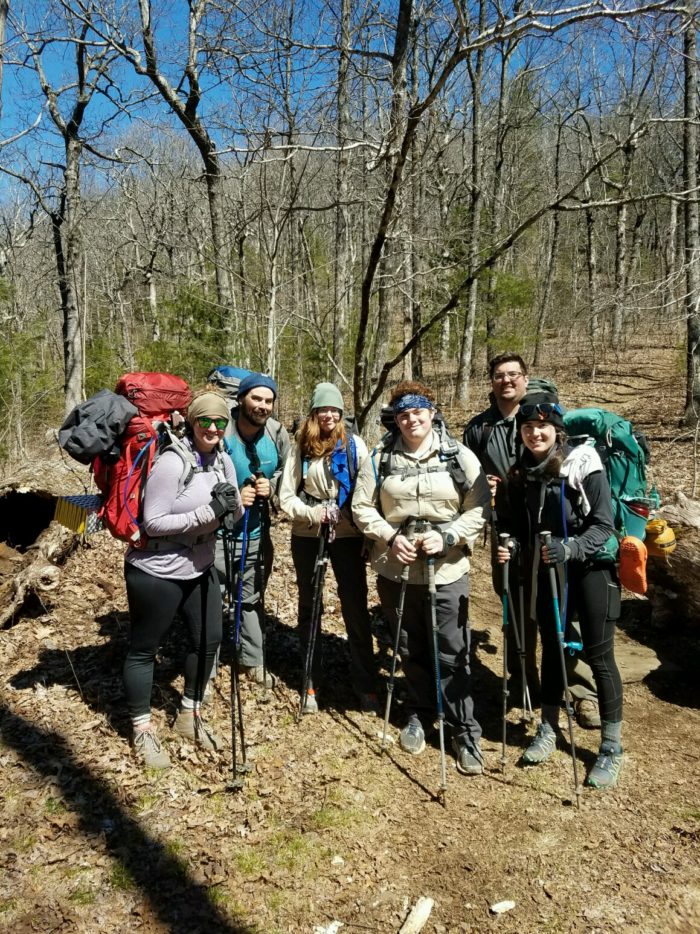 After stopping to admire one of the many views we’ve been lounging by, I swung on my pack and knocked one of my trekking poles over the side of the mountain we had just been gazing down. Fortunately, I didn’t have a Wild moment and chuck the other after it, because once I looked over the side, I realized I could shimmy down the mountain and get it, which I did while my friend Marco took pictures and braced to call 911. 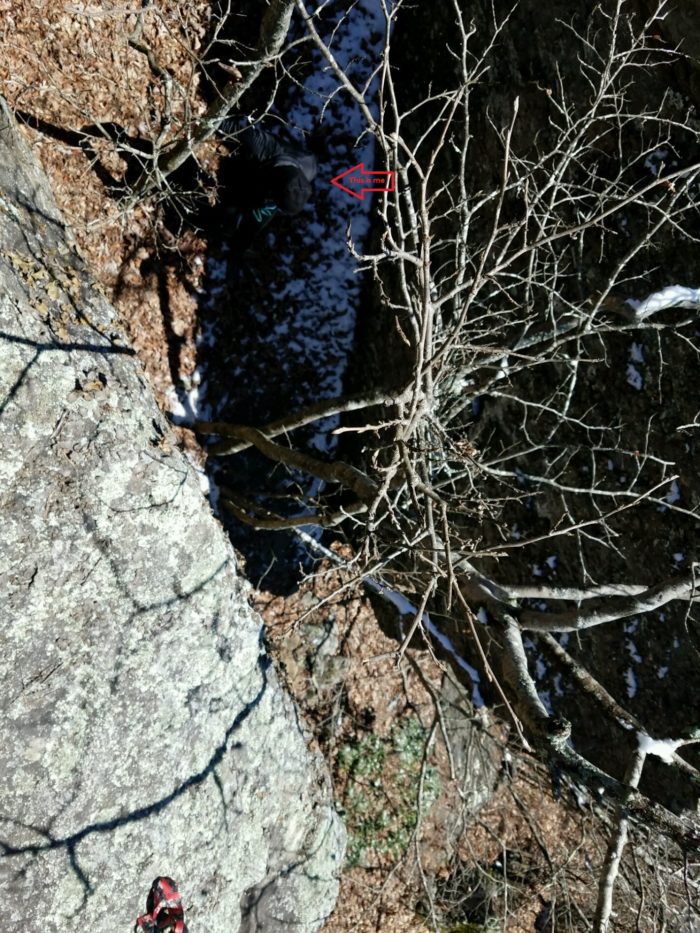 Rescuing my pole (you can find me by the arrow)

For all that I’ve been gushing about the sun, it’s still getting down into the mid-twenties at night and hovering in the fifties during the day. With the snow melt, we’re trudging through some serious mud, and you kind of start looking forward to the times the trail is just rock because at least you can’t sink ankle deep into that.

MVP of the Week

Darn Tough socks. I think the root of my blister issues from last week was socks related. I did all my practice hikes in Darn Toughs and listened when everyone espoused their virtues, but right before leaving I got a pair of socks for free and the thrifty side of me decided to bring them instead. Seven blisters later, I begrudgingly went out and bought the exact same pair of Darn Toughs I had left at home (in the same color no less) which was frustrating, but it’s been nice to take my socks off each day to an increasing less ugly sight instead of an increasingly gorier one. I was so happy to be walking pain free yesterday that I had to resist the urge to sprint on the flat spots. The runner up was the overly expensive but incredibly effective blister kit I bought in Neels Gap.

Beyond the two groups that fed us that epic lunch in Unicoi Gap, I should also give some love to Donna, who offered us all a ride out of Blairsville and then drove us up the mountain in two separate trips since the five of us couldn’t all fit into her two door sedan. She also gave us her number in case we needed anything before we reached Franklin, so thanks Donna, wherever you are! Also thanks to the random people who gave us beer wherever we went and didn’t comment on our smell.

This week has been a bit of a dream. Everything seems so easy compared to going over Blood Mountain in a snow storm (turns out they were pulling people off the mountain that day but just missed catching me) and I can tell I’m getting stronger and the hills are getting easier. My pack is getting lighter, my feet are healing, and it’s not too cold to stop and eat lunch. But having an established crew to walk with, to plan with, to laugh and commiserate with has made the biggest difference. We spent days talking about all the food we were going to eat once we reached town, and then we got there and ate it all. If that’s not what makes a trail family, I don’t know what does.