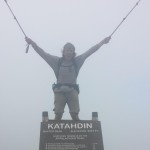 Pizza in the Woods!

I’m 62 miles from where I did my last post, about 4 days later. That’s the longest I’ve gone in 4 days so far, and my legs are definitely feeling it. I’m eager for a nice, short 7 miles today.

It’s been a beautiful 62 miles, though. 1 day out of Damascus, VA we climbed into the Mt. Rogers highlands, a long stretch of open terrain up in the mountains. Ponies graze in the grasses, presumably to keep the mountaintops bald. (They have a habit, it seems, of coming to graze right next to people’s tents at 2 in the morning…) Boulders are sticking out everywhere, some of which the trail led straight in between, some of which it went right over. It all felt somehow out of place compared to the other areas I’ve been through, which are totally covered in trees. As we left this part, though, the rain started, and it’s been on and off between that and uncomfortable heat. Just another challenge to work with, I suppose. Yesterday was particularly difficult–but at the end, I got to the Partnership Shelter, located right next to the Mount Rogers Visitors’ Center, with a phone from which we could all order pizza! With the food I’m bringing with me on trail getting increasingly bland (to switch things up, I experimented with bringing cashew butter instead of peanut butter–bad idea), pizza is more delicious than ever. Especially when consumed in large quantities.

By the way, I’m called Mogely now (like from the Jungle Book), not Whistler. I look like him, I guess. The change was made a while ago but I kept forgetting to post. I still whistle, though–unless I decided to stop and listen to the birds, which have started making quite a bit of music on their own.