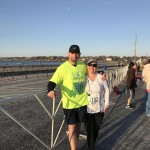 Rain, Wind, Snow, and the Little Piggy that Cried All the Way

“Mile 301.4 to mile 316.9.  Rain was the word of the day for all 15 miles.  I busted my ass to get a shelter spot and it worked.  It’s absolutely miserable out there.  I really can’t say much about the day.  It was just wet.”  That was the entry in OneFoot’s journal for day 32.  The next day he woke up at 4:55 a.m. and knew instantly he was making the 2.5-mile run to Nature’s Inn Hostel to dry out and warm up.  Thankfully, he was one of the fortunate ones to get a cabin with working heat. 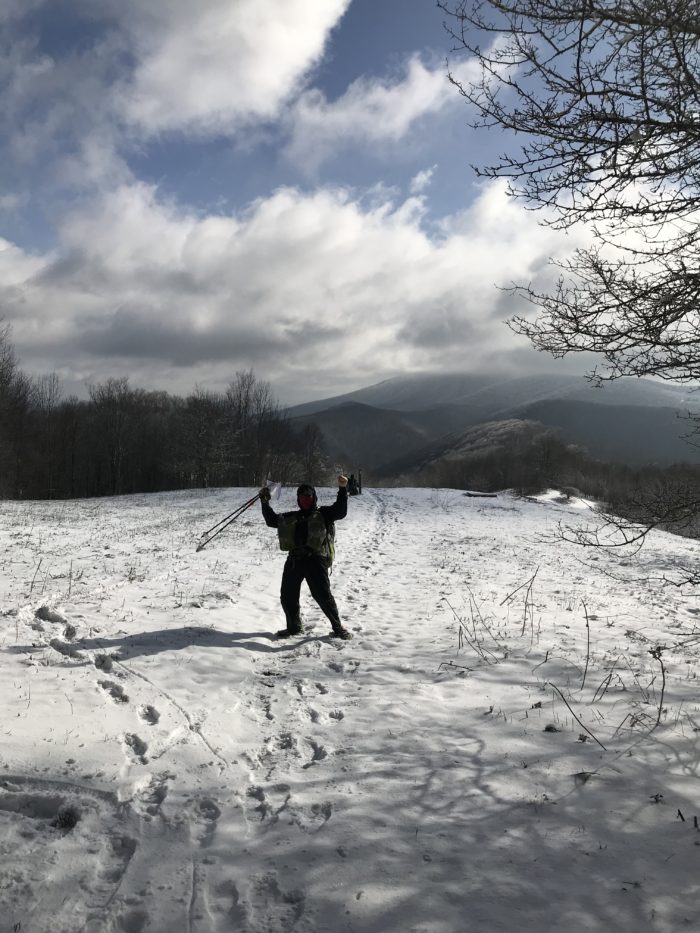 OneFoot’s trail journal tells the tale of a cold, wet spring on the AT.  Photos posted to his Facebook page show inches of new snowfall. Snow! At home we keep asking, “When is the weather going to break for him?”  He has good experience winter backpacking as he does his share of January through March trips here in New England.  He just didn’t expect to be walking in the snow in Tennessee and North Carolina in April.  The day in and day out rain just sucks, too.  But, as they say, no rain, no pain, no Maine.

On a Brighter Note

Wiley is heading to Maine!  We’ve mentioned Wiley and Navster in our previous blogs and Facebook posts.  Wiley had planned to join Navster for the first month or so of his thru-hike.  Word on the trail (well, from Ray) is that Wiley is staying on and heading to Maine.  He and Navster, former coworkers, make a great team and we’re very happy to hear this news.  Peer pressure can be awesome. 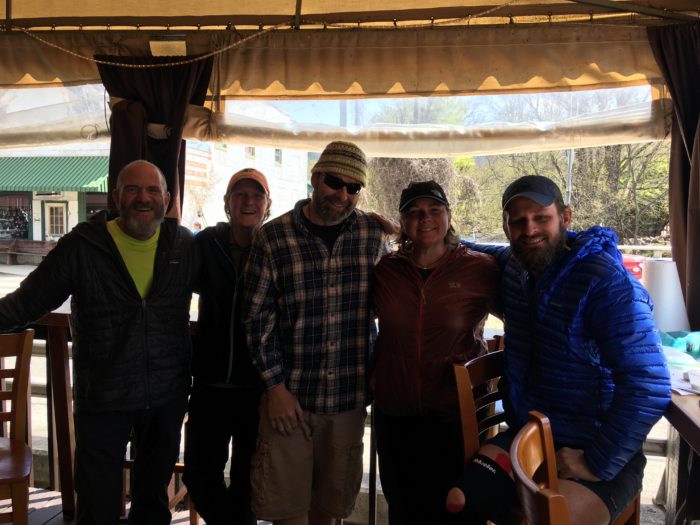 That’s Wiley and Navster on the ends.

What the Blaze Is That?

It was recently brought to my attention (thanks, Doug) that I have never talked about the meaning of the sign-off I use on these posts – Until the Next White Blaze.  It is a reference to the marking system used on the Appalachian Trail.  Hikers follow the white blazes painted on trees to stay on the trail.  Once above tree line, rock cairns are used as guides.  This also explains the necklace I wear. 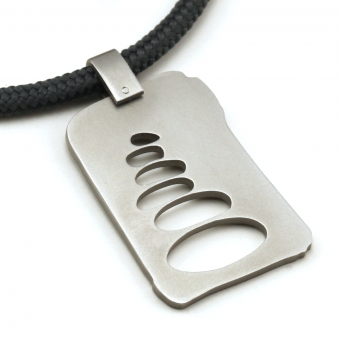 Can OneFoot Fit One More Snack in That Pack?

During his stop in Erwin, Tenn., OneFoot shopped at Walmart for some add-ons to his food supply.  Snacks, lot of snacks.  Once he returned to Uncle Johnny’s Hostel, he began reorganizing his backpack to fit the new supersized food bag.  He had to pull a Diane a couple of times to make it work.  That is the term we affectionately named for my mom’s frequent fiddling with the contents in her backpack.  A trait, according to Ray, that I inherited from her.  Anyway, after much Diane-ing (copyright pending), he found room for all his calorie-packed and deeeee-licious treats.  Calories, baby, calories!

What About the Little Piggy?

OneFoot was experiencing some pretty persistent foot pain throughout an 18-mile day.  It wasn’t letting up and was becoming worrisome.  He made it to Erwin for a nero and resupply.  While on the phone with me, he was talking about the foot pain when he discovered the cause.  He had been wearing a Band-Aid to keep a toenail from lifting.  The Band-Aid had slipped off the nail and wrapped itself at the base of the toe.  It was now acting like a tourniquet.  He released the bandage and the pain relief was instant.  Yup.  Pretty scary to think the damage that could have done.  OneFoot says he’s learning that where pain is felt isn’t always the source of that pain.  Like the agonizing knee pain he experienced several years ago while hiking the 100-Mile Wilderness.  Turns out it was his IT band, an injury hikers can know all too well.  Physical therapy and a new dedication to stretching helped overcome that injury.  This latest pain wasn’t even felt in his toe, likely because the toe was numb from lack of circulation.  Glad that crisis was avoided.  He reports that after a nero in Erwin, his foot feels great. 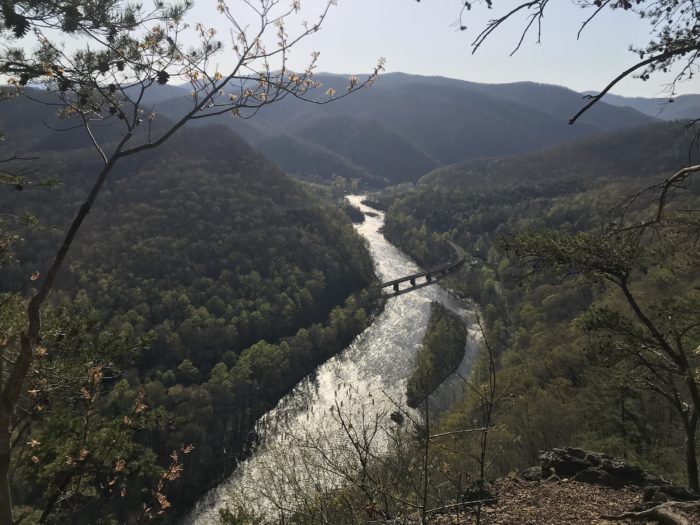 This is a better pic than the one of OneFoot’s nasty toe.

The Best Advice He Ever Received

When you hear the same advice from several people, there’s got to be something to it.  Right? Time and again, OneFoot was warned to take it slow, enjoy the walk, and live in the moment.  Even if he makes it all the way to Maine, in retrospect it will seem like it passed very quickly.  So how is he doing on that?  He reports that he’s making his way north at his own pace, taking it all in, and embracing the moments.  He’s watched many fellow hikers rushing up the trail in their quest to reach Maine.  This is their choice and may be right for them. Hike your own hike.  For OneFoot, this time has always been about more than just a walk in the woods and reaching Maine.  This is about immersing himself in the culture, experiencing places along the way both on and off the trail, and taking the time to connect with people and listen to their stories.  In the big picture, this adventure is only six months out of an entire lifetime.  There’s a lot of living to do in that six months.  Don’t rush it.

What I like about OneFoot’s approach to this thru-hike is his willingness to listen to his body.  If he’s tired, particularly sore, or in need of a mental break, he steps off the trail for a nero.  He has a lot of miles yet to cover.  It’s amazing the restorative powers that can be found in a hot shower, clean laundry, or just sitting in a chair rather than on the ground.  It’s not just about the destination.  It’s about the journey.

OneFoot and Should Be Good 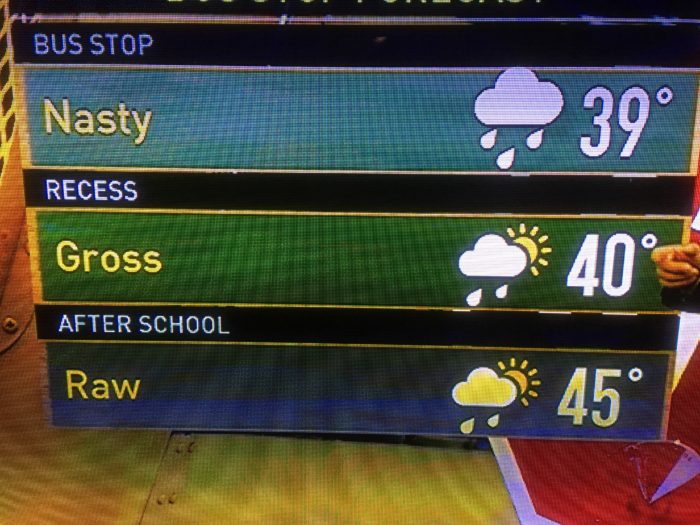 Hey OneFoot – the weather is no better here in Connecticut!