I’m late in publishing this. We went to hike the AT in Maryland back during the second week of December. Then the holidays came and now I’m regrouping and catching up.

Bottom line – Maryland was worth the drive. What a wonderful place!  Ian and I wanted to do a more extended trip over multiple days, and we were a little nervous to do it up in our neck of the woods (Massachusetts) as it is getting colder and snowier. In hindsight, we had nothing to worry about. It hit 60 degrees here on Christmas Day! Anyway, we decided to head south and hike north out of Harpers Ferry, WV on the AT into Maryland. 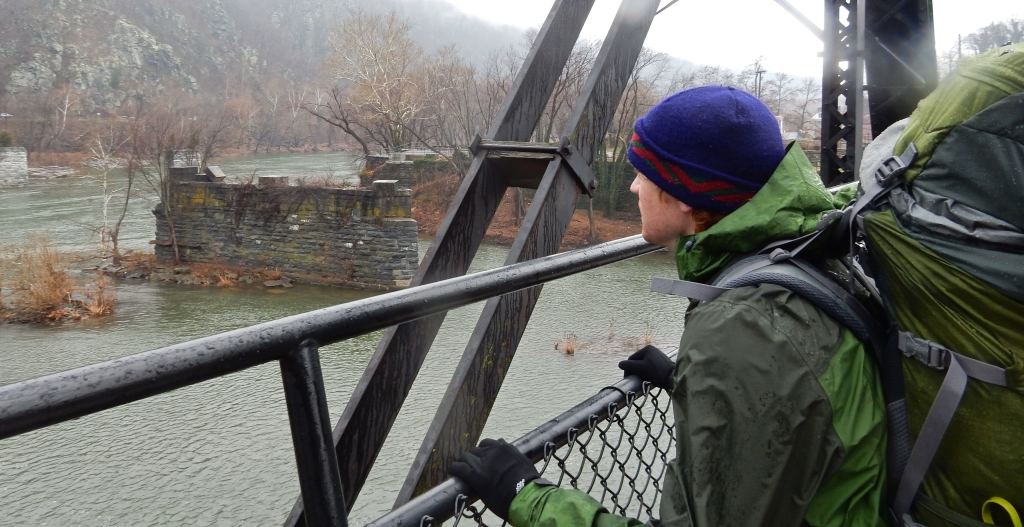 On the Bridge Over the Potomac

Our goals were to:

We ended up taking a 5 day trip and hiking about 50 miles.

Ian and I both had new backpacks (Christmas came a little early). We both decided on the Deuter ACT Lite 65+10 packs. Ian was ready to dump his old Kelty external frame pack that he’s had since he was twelve. I wanted something smaller and lighter than the Gregory Palisades 80 pack I use with scouting. Ian was also trying out his Big Agnes FlyCreek UL/2 tent. I am sticking with my hammock (Hennesey Ultralight). We are both sticking with our existing sleeping bags for now: a NorthFace Snowshoe and a Marmot NeverSummer bag.

With food for 6 days (and water), we came in at around 38-39 pounds in total weight. It’s a little high but we had some extra clothes and insulation layers taking into account the winter months. We also carried Microspikes in case there was some ice or snow to deal with. These turned out to be totally unnecessary. Obviously, some of the stuff we brought we can leave home when we start in May.

On Monday, we drove down to Harpers Ferry, arriving around 5 PM. We stayed at the Teahorse Hostel, which is just down the street from the ATC headquarters. The hostel was wonderful and we would recommend it to anybody. The proprietor, Laurel, named it after an ancient trading route between China and Tibet. After getting settled and eating dinner, we walked down to the river and found the bridge where the AT crosses the Potomac. 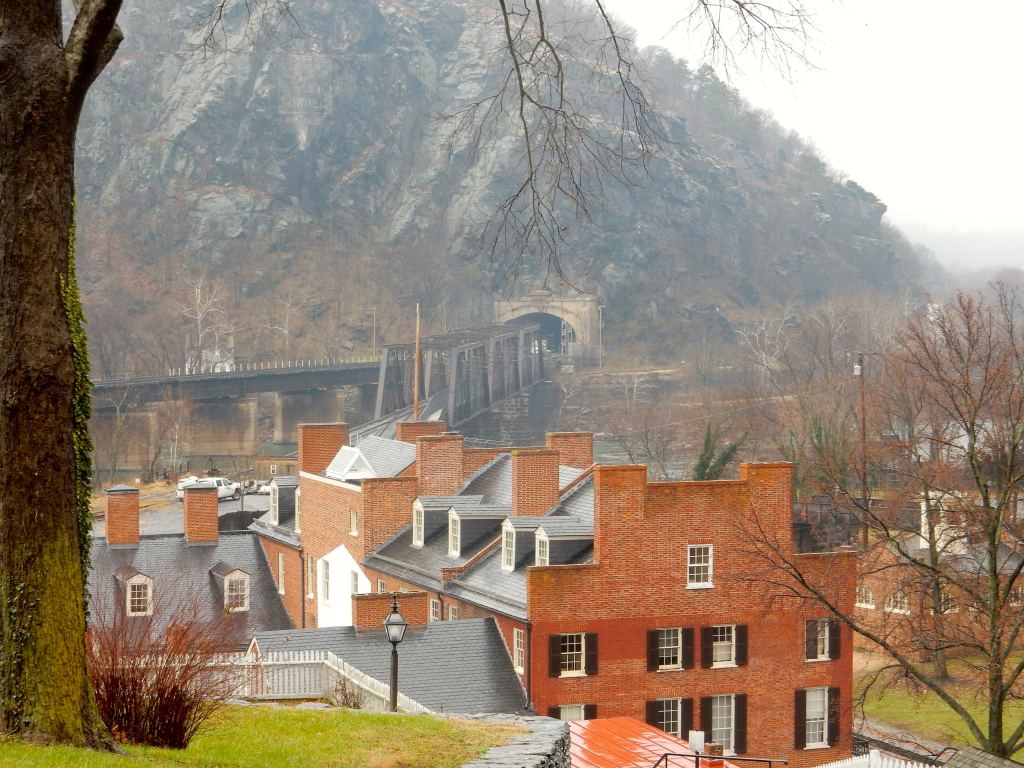 On Our Way out of Harpers Ferry

After a great breakfast of waffles at Teahorse, and a visit to the ATC headquarters, we headed out Tuesday around midday. It rained on us most of Tuesday, but our rain gear worked fine. As we walked along the trail still in Harpers Ferry, we saw a group of 5 or 6 deer standing on a hill above us. They did not seem the least bit nervous about us and placidly watched as we moved along the trail below them. Usually when I see deer it is a flash of their back end as they run away. We did about 7 miles that afternoon and stopped for the night at the Ed Garvey shelter. It was damp and foggy at this point, so sound was muffled and you could only see about 15-20 feet. It felt very isolated. 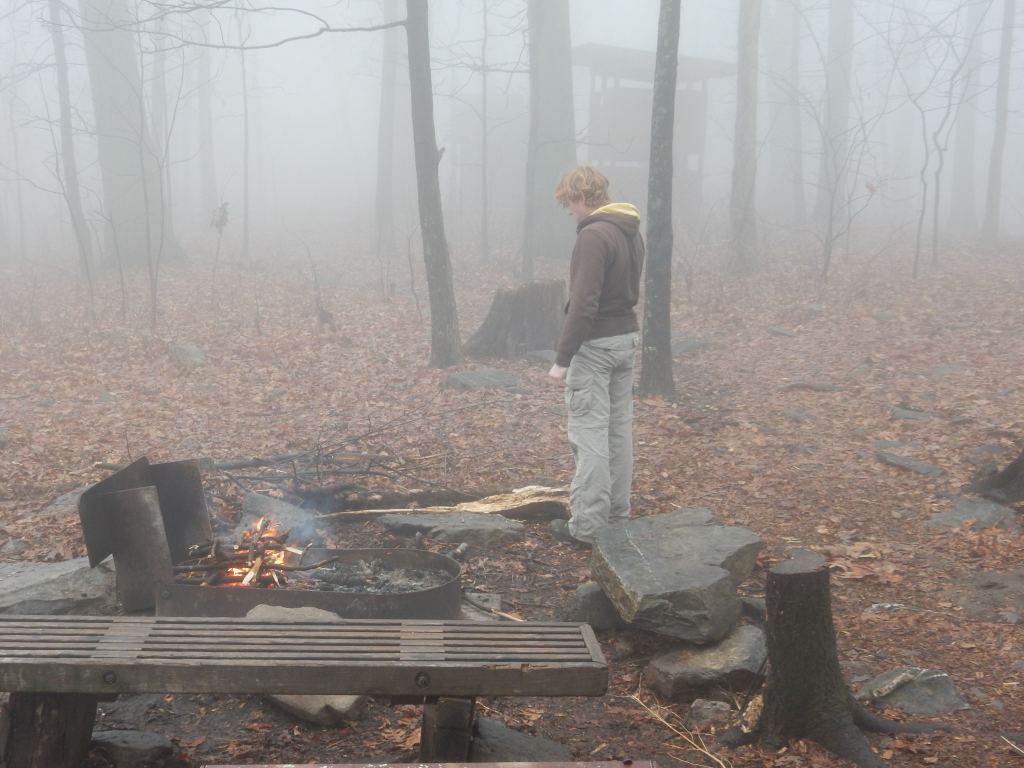 After a dinner of a pasta salad and some cheese and some peanut butter, we played a game of cribbage and then turned in early. After all, what do you do when its dark out and 28 degrees? Sometime during the night, I woke up and looked out the front of the shelter. The skies had cleared, and you could see the stars and the moon. Plus, the valley below was now visible with all its lights. When we went to sleep, I felt we were far, far away from any other people. Now I could look out and see signs of thousands of people just within a few miles of us. When we got up just around dawn, we could see the long streams of car lights moving along the major roads. I was very glad to be where I was. 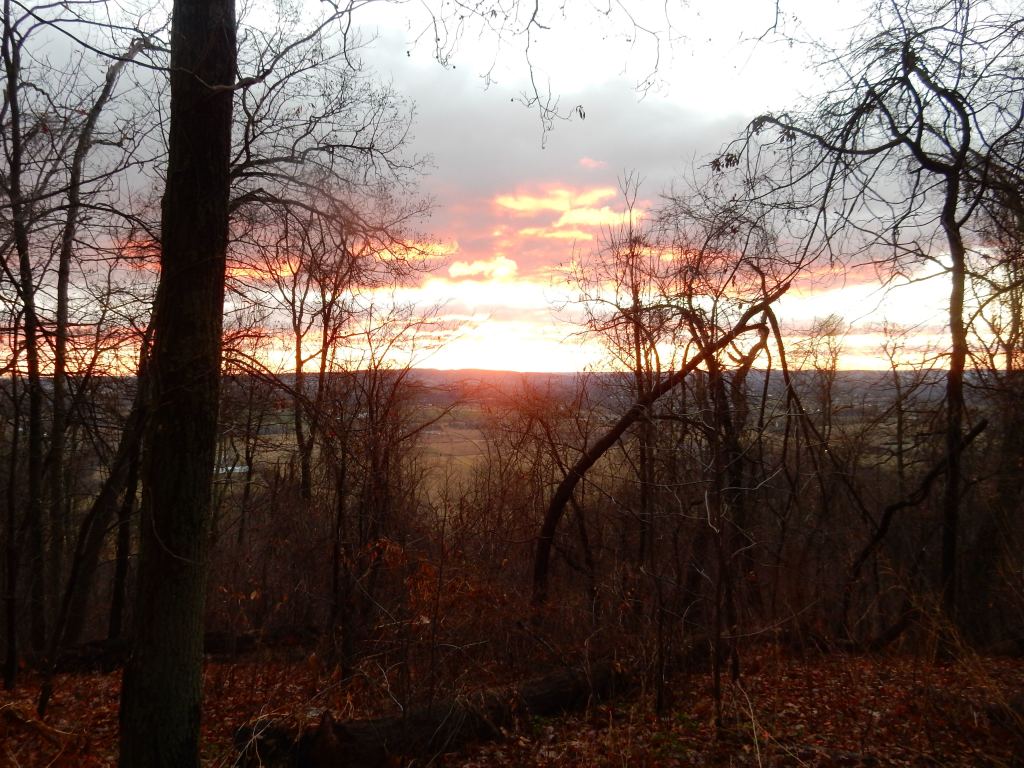 Wednesday, we walked about 10 miles to the Rocky Run shelter. This was after passing through Crampton Gap, looking at the memorials, and reading about the Civil War battle fought there. Things had dried out quite a bit and rather than sleeping in the shelter, we set up camp up on the ridge behind the shelter. It was an opportunity for Ian to test out his new tent. The night dipped below freezing and we had to deal with semi-frozen water in the morning. Wednesday afternoon, we ran into a volunteer for the National Forest Service. He recommended that we head to Annapolis Rocks for our next night, so that was our plan on Thursday morning.

Thursday, we passed through Fox Gap and Turners Gap. There were a whole series of battles fought along South Mountain, with the Federals trying to cross through the various gaps and the Confederates trying to hold them back. On one side of South Mountain is Frederick and on the other is Sharpsburg and Antietam. It was hard to imagine that 160 years ago, this quiet serene area was crawling with soldiers. Rising out of Turners Gap, we went through Washington Monument State Park, which boasts to have the first monument built to George Washington in the country. The map and trail guide said the monument was an obelisk like the Washington Monument in DC, so I was picturing this tall white marble thing rising to great heights. What we found looked more like a Viking Tower from the middle ages. Nevertheless, the view from the top was beautiful. We continued north, crossed I-70 and had lunch at Pine Knob Shelter (which I wrote about in my previous post) and then moved on to Annapolis Rocks and camped for the night. 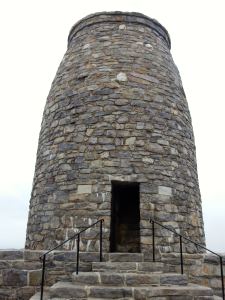 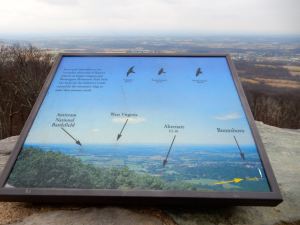 View from Top of Washington Monument

There was a spring and a privy, but no shelter. We camped at one of the camp sites, and tried to play cribbage inside Ian’s tent to stay out of the wind. I think his tent is going to work out well for sleeping and it is also pretty light, but its not the appropriate place to two full-sized adults to play cards. At least it kept us out of the biting wind.

Friday morning (frozen water again), we decided to see if we could stretch out legs a little bit and put on some miles working our way back south. We ended up putting in a 15-mile day and reaching the Crampton Gap shelter on our way south. We stayed in the shelter Friday night. As was becoming our habit, we crawled in our sleeping bags after dark (about 5:30 PM). Sometime in the middle of the night (you know, about 7:30 PM….) we were woken up by flashlight beams shooting all over the place and a young voice saying “Oh no! There’s people in here!”. That’s how we met a scout troop from Columbia Maryland who were up on a winter camping trip. We offered to make space for them in the shelter, but they decided not to inconvenience us and moved up the hill to set up tents. They were remarkably quiet in getting settled and did not disturb us the rest of the night. 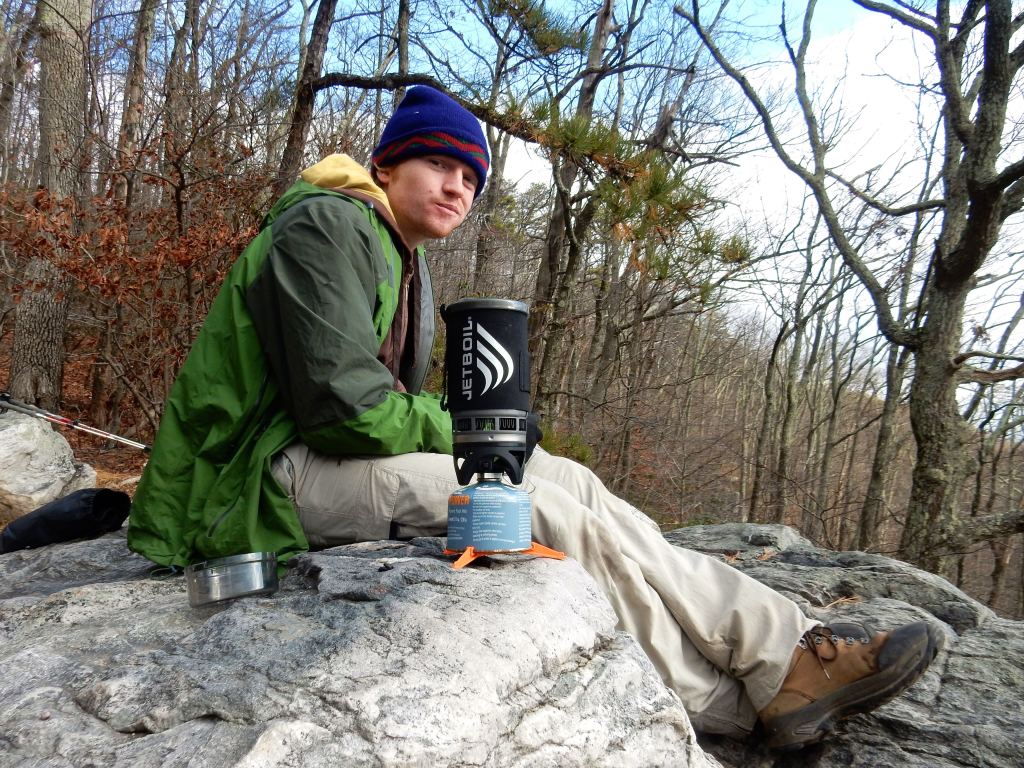 Lunch with a View

On Saturday morning, we got ready for the final push back to Harpers Ferry, about 10 miles. After donating some of our excess food to the scouts (they were happy for the food, and we were happy that we didn’t have to carry it anymore) we set out to retrace our steps and arrived back in Harper’s Ferry at the ATC headquarters around 1:30 in the afternoon. Back to Teahorse hostel, showers, and out to eat a lot of pizza. 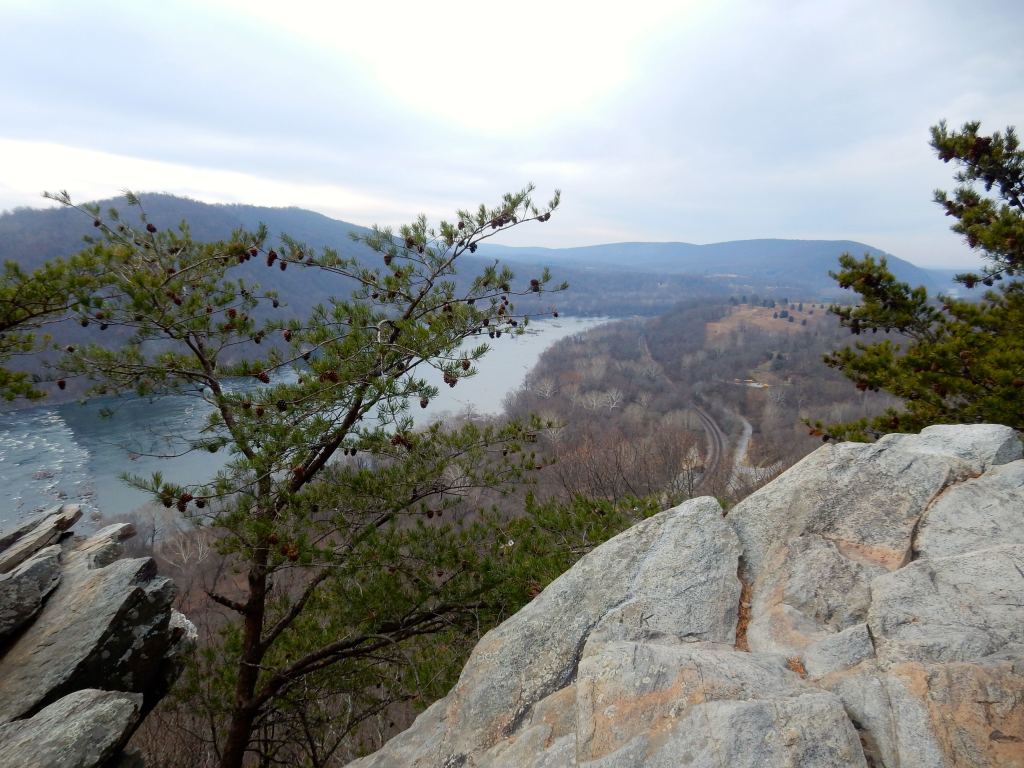 Weverton Cliffs – Back to Harpers Ferry

About 5:00 PM, Laurel came into the hostel to apologize for the temperature being so low (she had it set at 60 degrees as no one was there). We not only didn’t notice, we thought the place was wonderfully warm after 5 days out in the woods moving between 28 and 38 degrees. After a great night’s sleep and another delicious breakfast of waffles at the hostel, we set out on our drive back to Massachusetts.

We loved the trail in Maryland. The surroundings were beautiful, the history was rich all around us, and the few people we met were friendly and helpful. We are thinking of going back in the spring, getting a shuttle down to the south and then hiking north into Harper’s Ferry.

Here are our takeaways.

It was also nice to get into town and get cleaned up after five days. I expect we will look forward to hitting civilization periodically (every 7-10 days) for a shower, for a rest, and for resupply.