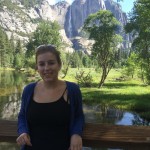 We did a shakedown hike over Labor Day weekend in Hiawatha National Forest in Michigan on the North Country Trail (a 4,600-mile trail that runs from NY to ND but is only about 50% complete). It was the first time we hiked all day with our packs, and our first time stealth camping, and I came out of it having learned several important lessons.

Lesson #1-Get shoes that fit!
After some research I settled on Salomon trail runners as the shoes I plan to wear next year, and they are great except for the fact that the pair I bought are definitely too small for me. I don’t know if you’ve ever tried to walk 20+ miles with shoes that don’t fit, but it is really, really hard. I couldn’t feel my big toes for about five days after I came home. I bought the shoes online, but I had tried them on in the store beforehand and they fit well with the socks I was wearing at the time. The socks I wear hiking are a bit thicker, and somehow that was enough to make a good-fitting shoe into a foot vise. I’ve worn these shoes all summer and was blaming my socks for the blisters/tightness I felt, but I definitely concluded this time it was the shoes’ fault. I’m not looking forward to this experiencing this again next year if my feet start swelling up a size as everyone says they do!

After about 5 minutes of walking I realized something pretty bad: I can’t breathe and walk uphill at the same time. This is obviously a bit of a problem, as the AT is unfortunately not flat for the entire 2,000+ miles. The North Country Trail was rolling hills more than half the time, and I found myself having to stop every 10-20 seconds going uphill to catch my breath. I was getting worried because that isn’t going to be a sustainable pace if we’re going up and down mountains all day on the AT, and it felt much harder than just being out of shape. I’ve been experiencing breathing problems all year, and luckily I already had an appointment with a pulmonologist for an exercise stress test the next week. It turns out (unsurprisingly) I have asthma. I’ve started on an inhaler which will hopefully help, but it’s definitely going to be something that affects my hike next year. I’m glad I’m at least dealing with this well ahead of time, but it’s a great reminder that you can’t just ignore health problems and hope they go away. 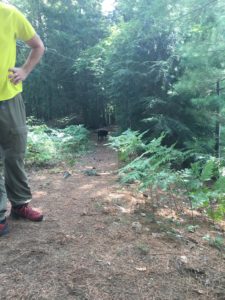 It was a really nice Labor Day weekend so I was surprised when we arrived at the parking lot for the trailhead and there were only two other cars there. One of those cars left before we even finished getting our packs on. Over the course of the three-day weekend we ran into two day hikers, and walked through a designated campground with several tents set up, but other than that it was complete solitude the entire time. I loved this during the day. At night it was a little bit creepy. The first night I heard wolves howling and realized I had absolutely no idea what to do if a wolf approached our campsite. I’m not scared of bears- I grew up where bears are common. But I don’t know anything about wolves, and I spent the rest of the night convinced every twig snap was a pack of wolves coming to eat me . As unlikely as it is that we’ll be attacked by animals/stalked by a deranged murderer/crushed under a falling tree/etc, it’s a strange feeling going from being within shouting distance of your neighbors to completely alone and disconnected from the world. I’ll have to see if I stick with my original plan to mostly stealth camp, or we tent near shelters/other people more often. 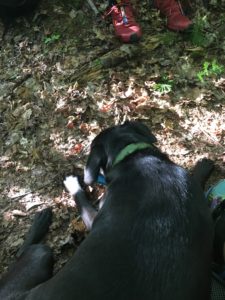 Dog didn’t even hear the wolves

Lesson#4-Always have more water than you think you need

We ran into someone in the parking lot before we started hiking who told us there was “plenty of water” out on the trail. This was a lie . There was no water out on the trail, except a stream we camped at the first night, and a couple of stagnant lakes about ~7 miles into the day. We carried a 2-liter bladder and a gallon jug of water with us. Before we left camp in the morning, I wasn’t sure if we should bother filling up the gallon as we were going to be encountering “plenty of water” throughout the day, and it was really heavy. Fortunately we did fill it up. The trail map I had showed several water crossings, but they were all dried out. We had a Sawyer mini and a Lifestraw with us, so even gross water would have been fine, but there was nothing. We managed to have just enough water to get us back to the stream we camped at the first night, but I was feeling ready to be done at least a couple miles before we made it there. I hate having a destination, and being without water means you have to make it to the next source no matter how far. I definitely learned that I should always have more water than I think I’ll need, and if I encounter someone who tells me there is plenty of water, I’ll make sure we have the same definition of “plenty”. 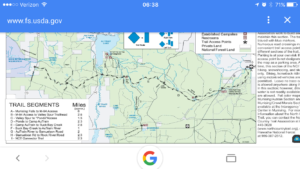 Mentally, I was probably done walking at about 13-14 miles the second day, but we had to make it 16.5 to get water and a level place to set up our tent. The third day, even though we only had to go 4.5 miles, I was ready to be done after 1. I couldn’t breathe. I couldn’t feel my toes. And it isn’t super motivating to know you have a 6+ hour drive once you finally do make it out of the woods. But even feeling physically and mentally drained, I can keep going. I think that’s the most important lesson . I’d still rather be outside than at my desk at work, even if I feel a bit like I’m going to die sometimes. 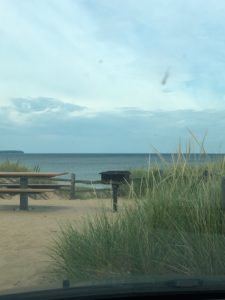 Other quick take aways:
-I can manage to ignore my pack fairly well except for the first time I have to put it on after having taken it off for a while (it weighed in at about ~25 lbs and it will probably hover around that the whole AT)
-I need to get hiking poles or I’m going to fall backwards down a mountain
-I need to learn how to tie knots (I can’t even properly tie my shoes, but at least the trail runners don’t have laces) or settle for a really haphazardly hung bear bag
-Solar phone chargers are useless if you forgot the charging cord
-Peanut butter is useless if left on the counter at home
-Don’t put things in the dog’s pack that aren’t zippered in because they will disappear somewhere in the forest
-The Sawyer mini is either way too slow or I’m doing it wrong
-I should write things down the day they happen or I’ll forget by the time I sit down to write about it + take more pictures

Hello! I'm Emily, and I'll be doing a flip flop AT thru-hike in April 2017 with my boyfriend Dan and our 1-year-old lab pup Oliver. I grew up a couple miles off the AT in northern NJ, went to college in Washington, DC, and for the past three years have been in the Chicago area, and I'm very excited to leave cities & suburbia behind to live in the woods for half a year! We'll be heading south from Delaware Water Gap April 3rd, so if you're a NOBO hiker in 2017 we'll likely cross paths.