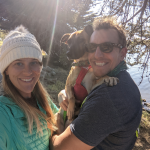 Shaking Down Gear and Shaking Out Nerves (Kind of…)

In May of 2020 my boyfriend, Ryan, and I made a plan to quit our jobs and take a year-long sabbatical to travel around in our 2015 Ford Transit Van, hike the Appalachian Trail, and go on an extended adventure.  We had a lot of work ahead of us to make the van a viable living situation for the two of us and our dog, Parker. In November, we packed up our lives in San Diego, sold my house, and put our noses to the grind-stone on our van conversion. I’ll do a lengthier post on this topic later.

Ryan and I, like many others, went on a purchasing spree around the holidays for our prospective AT thru-hike in March of 2021. What we had been procrastinating in doing is shaking down our gear, testing out our new equipment, and getting our trail legs ready after diving in to the decision to hike the AT.

After weeks of van remodeling, we knew we had to start testing out our gear, getting in shape, and hitting the trail.  We have been camped out behind my dad’s Northern Virginia farm house, working day and night to get the van where we wanted it to be. Situated not far from the AT, our plan was to do an extended weekend hike on the AT, southbound from Bear’s Den to Front Royal, Virginia. We planned to set out at day break on a beautiful Friday morning and have my dad pick us up on Sunday whenever we made it to Front Royal. My brother was going to meet us Saturday morning near Ashby Gap and hike Saturday and Sunday with us and his pup, Annie. 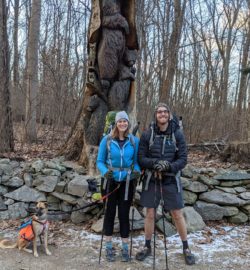 Just as we had planned, my dad dropped us off at Bear’s Den and we hit the trail headed South. Our hike was going just great, we saw only two other groups of people on the trail and we were making great time. As we were nearing our Ashby Gap meeting point, we started looking for somewhere to camp for the night, something I hadn’t anticipated being so difficult.

I had picked Ashby Gap as a meeting point for my brother due to easy access right off of  Route 50, assuming that we could find somewhere to pull off of the trail for the night. We finally arrived at Ashby Gap, not having found anywhere flat to camp for the night. By this time, it had started to get dark and cold as the sun started to go down on the other side of the mountain. We decided to cross Route 50, a bustling highway at rush hour, hoping that there was somewhere more suitable for camping on the other side. After darting across the highway on tired legs we were met with a sign saying that there was no camping. There was absolutely no camping along the trail all the way from Route 50 to the southern end of Sky Meadow’s Park with the exception of a shelter that was about 6 miles further south — something that we just weren’t going to be able to make. We felt like we just couldn’t win. We weren’t sure what to do. Our only option was to go back across the highway and try to scramble together some kind of plan as it continued to get darker.

We were cold, hungry, and tired after hiking the 14 miles from Bear’s Den to Ashby Gap. Just before we had crossed Route 50 there was a gravel parking lot for the trail head. Optimistically, we thought we might be able to camp in for the night.  We rushed back to the parking lot and scoured it, looking for somewhere –anywhere– to set up our tent. Even near the parking lot, there was very little flat terrain. We hesitantly set up our tent, in the dark, that we had only pitched one time before in my friend’s back yard under optimal conditions. Our tent stakes struggled in the rocky terrain and our tent was still on a good slope.

It was dark, windy and cold, about 30 degrees outside. To get out of the wind, I got into the tent and started to cook up some noodles since we were starving. I made one pot of noodles and very carefully transferred that serving of noodles into a collapsible bowl, making sure to not spill any. On to the next pot of noodles.  I placed the stove and pot outside of the tent and carefully moved across the tent to grab more water and the second pack of noodles. While rummaging through Ryan’s backpack for supplies my foot gently grazed his sleeping pad sending the steaming bowl of noodles careening down our sloped tent. Hot noodle soup soaked my sleeping pad like a sponge. My gloves, my socks, my sleeping pad, the tent. Everything was covered in soup. The soup started to cool very quickly. Both sides of my sleeping pad were  drenched.  I sat there, looking  at  the  mess,  not  knowing  what  to  do  next. 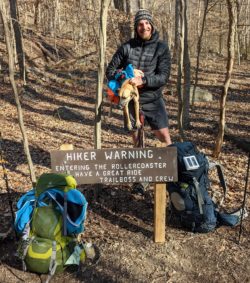 Defeated, cold, hungry, and now soup-covered, I called my brother and told him about what had happened. I told him about how our beautiful day hiking turned into nowhere to camp and resulted in our terrible camping situation and my soup-coated gear. My eyes welled with tears. It was only 6:30pm at night and my dad was 20 minutes away by car.  My brother told me that it wasn’t worth it to suffer through the night, especially in the winter when cold and wet gear can quickly become dangerous. I heeded his advice and called my dad for a rescue ride home. Twenty minutes later, my dad showed up and helped us pile our soupy gear into the car in the pitch dark.

As we were driving home, I felt discouraged. But, I reflected on what we had learned. We should have stopped hiking long before getting to Ashby Gap while we had daylight.  Feeling the need to push on and get to Ashby Gap to meet my brother put us into a less than desirable situation to camp and didn’t give us any wiggle room with daylight.  I also learned to never cook inside my tent. If we had pulled off the trail earlier in the day, we could have made a fire, cooked outside, and enjoyed the evening. We’re still excited for our upcoming thru-hike and we’re looking forward to our next opportunity to hit the trail with some lessons-learned as we plan our next shakedown.

Hey everyone! My name is Liv. My partner, Ryan, and our pup, Parker, will be parking our converted camper van and embarking on a 2021 AT Thru Hike starting in March. I'm looking forward to sharing our experiences on trail with you all as you read about our journey. Stay tuned!