So Far, So Good! My First Week on Trail

After two years of planning I’ve finally taken my first steps on the AT. To say I was nervous beforehand would be an understatement, but my first few days on trail have gone more smoothly than I would ever have imagined.

Arriving at Amicalola was surreal. Although it’s something I’ve seen pictures of for ages, part of me thought that maybe it didn’t actually exist, maybe the Appalachian Trail was just something made up online. But I can now confirm it’s real. I’ve walked some of it and it is beautiful.

Weighing in my pack was a nasty surprise: 44 pounds! That’s about ten pounds heavier than I was expecting. I think most of the excess weight was caused by bringing too much food. So far (day three) I’m finding the weight fine, but want to ditch some stuff at Neel Gap in a couple of days. I see it as good training, if I can get up these hills with 44 pounds on my back then I should be flying once I shed some weight from my pack.

After a brief information session from some ATC staff it was time to head out.

A lot of people had family there to wave them off so it was slightly anticlimactic for me just walking through the arch without any big goodbye. I definitely had a momentary panic by myself in the toilets at the visitors center but after that there wasn’t much to do except start walking.

The dreaded Amicalola Falls steps were not as bad as I’d feared. I’d heard horror stories of people bailing on their whole thru-hike halfway up the steps because they were so hard, but after less than 40 minutes of walking I was at the top without much hassle. The waterfall was impressive enough to distract you from the strain of the climb.

The rest of the walk up to Springer was nice; pretty steep in places but again, better than I’d feared. The sun was out all day and as the leaves haven’t come in on the trees yet I definitely caught the sun.

Arriving at the shelter was the first time I didn’t really know what to do. Where should I put my tent; near the shelter? Near the water? Near the privy? Thankfully, a few minutes after me another girl who’d I’d been hiking around all day showed up looking equally lost so we teamed up and pitched our tents next to each other. By the evening there was a group of about six of us around the table by the shelter. It was amazing how much more relaxed I felt even after just a couple of hours at the shelter. A few of us walked back up to the summit of Springer Mountain to watch the sunset, which was beautiful! 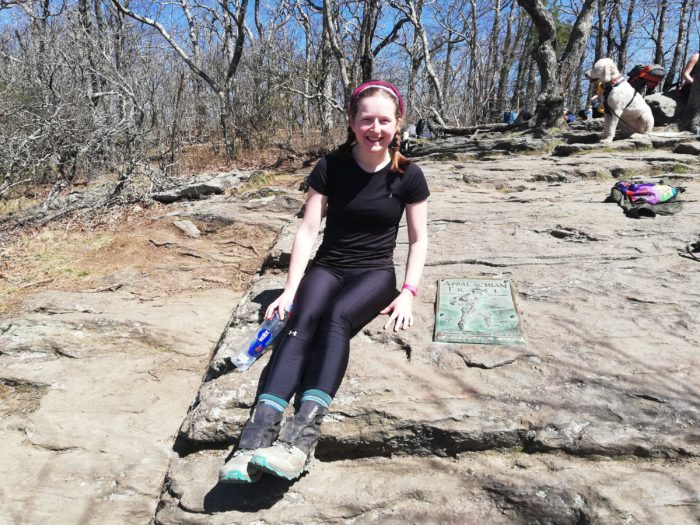 Day two was just as beautiful as the first. All day there were little stream crossings made of planks of wood. I hiked alone for the morning, then was joined by a friend from the shelter for the afternoon. This guy was the first in our group to get his trail name, although it is still up for debate. If you ask him, his name is Green Slouch, after the hat that he wears constantly. Most of the group from the first night arrived at Hawk Mountain Shelter in the early afternoon. We settled in for an afternoon of socializing and an evening of playing cards, with some new faces as well. 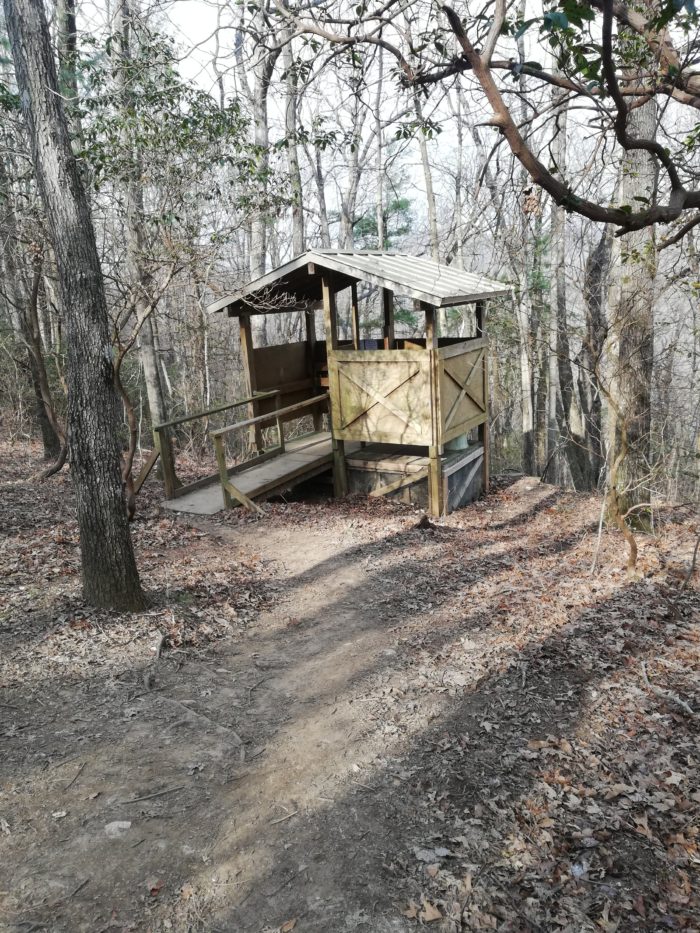 The word going round was that there was rain starting at 7 a.m., so I’d set an alarm for just after 6. Morning seems to come slightly later down here so it’s not light till after 7, meaning my whole pack-up was done in the dark. I hiked out with Green Slouch again and we caught up with Heidi, my tent neighbor from the first night; after an hour or so and we roughly hiked together for the rest of the morning. Sassafras Mountain was the biggest climb of the day but it was done over lots of short ups and downs, so wasn’t too bad.

We arrived at the next shelter shortly after midday. No rain yet. We quickly claimed the top tier of the shelter with our sleeping pads and tried not to feel too smug as we watched everyone else arrive dripping wet throughout the rainy afternoon. It’s now 7:45 and I’ve barely left the shelter all afternoon. I’ve had my first gear casualty; the water bladder for my Sawyer Micro fell off a bench at the shelter and burst. Much duct tape and Gorilla Tape has been strapped round it but I’m doubtful that it’ll hold up. That’s now the first thing on my list to buy at Neel Gap. We just witnessed our first thunderstorm with a few massive lightning bolts, which was pretty impressive. 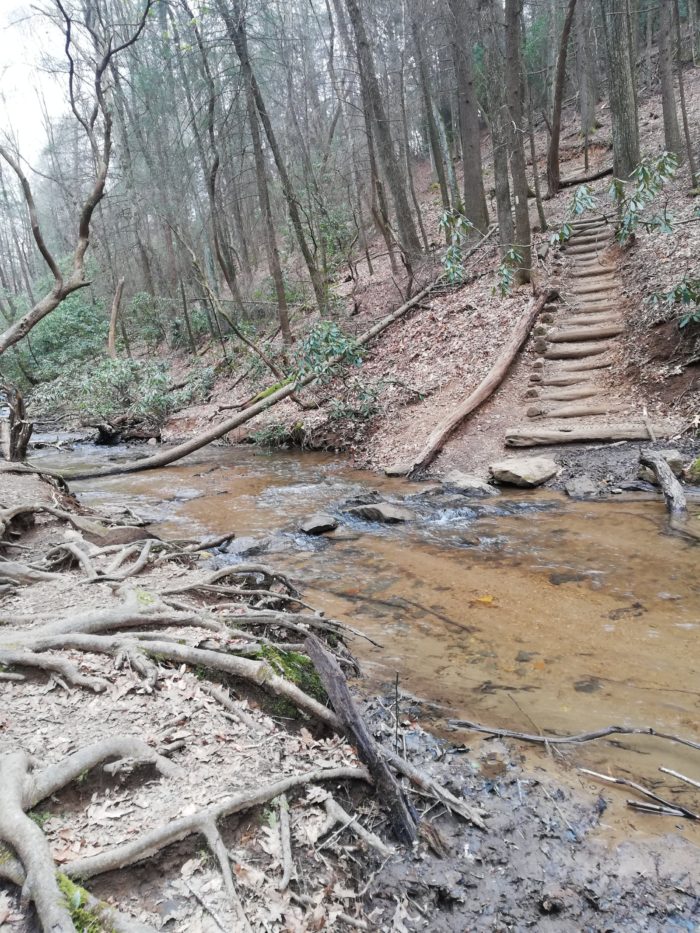 Sleeping in the shelter was actually a lot more peaceful than I’d expected. We did not get a visit from the “flying squirrel” (I forget the real name) that is apparently native to this shelter. From 5:30 a.m. people were getting up so it was another early start and I left camp alone at about 7:30. The rain had stopped 12 hours ago but the cloud was still low, making the woods a bit eerie, but it was nice and peaceful to be out hiking alone. At Woody Gap the trail crossed a road and there was a privy but most excitingly, there was a bin. I could get rid of all the rubbish (or trash) I had been carrying around for four days.

The guidebook noted a couple of viewpoints offering sweeping views far off into the distance. Sadly at the time that I was up there all I could see was cloud. Somehow the cloud had cleared when everyone else walked through and so I got to witness the beauty through their photos. As I write this we’ve all been holed up in our tents since about 5:30 p.m. when the rain started coming down. This is the first place we’ve camped without a shelter, privy, or bear box (thankfully it has bear cables but the bags are going to get soaked) so there’s been a few extra challenges to contend with. I’m trying to drink as little water as possible as I don’t want to have to leave my tent. This is helped by the fact that I don’t have much water to drink as I can no longer collect as much after the death of my Sawyer pouch.

All food and toiletries have to go into the bear bags, so that means I ate tea at about 4 p.m. and can’t access any more food until morning unless I fancy going out in the rain to retrieve and then rehang my bag. There is very patchy phone signal here so I think people on the Verizon network will be making the most of that; sadly for me my one bar of signal disappeared as soon as I tried to make a call. So here I am drafting a blog post instead. 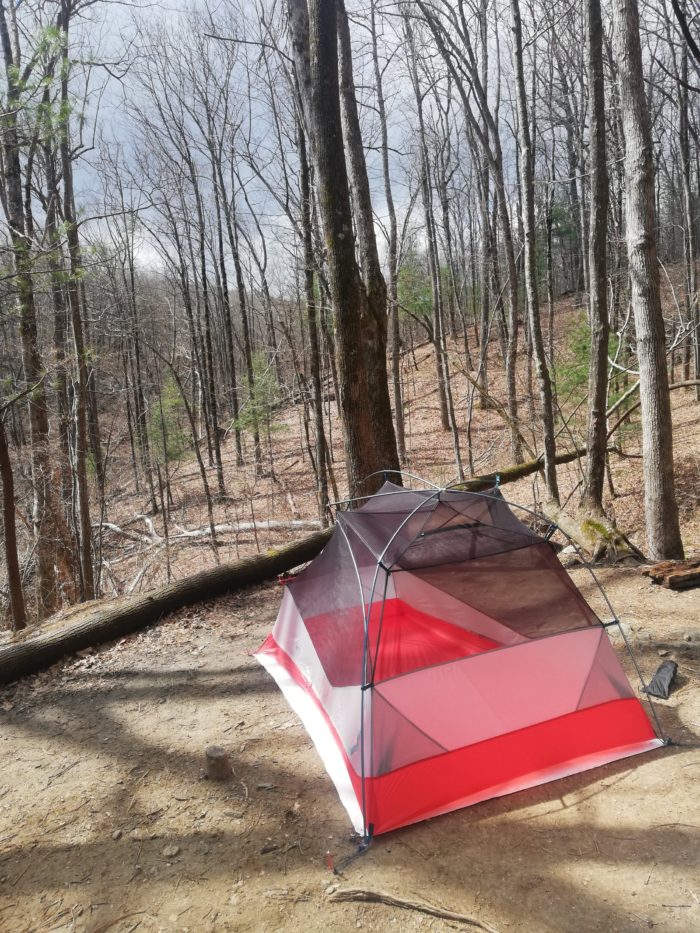 Day five took us up and over Blood Mountain, and the view was incredible. We also passed through Neel Gap, the first resupply point on the trail and a big mental milestone for me. Day six and seven I mostly hiked with two members of my new tramil: Green Slouch and Q-Tip. We crossed the 50-mile mark on day seven. Apparently we’re going with the tramily name The Funky Bunch because we smell funky! 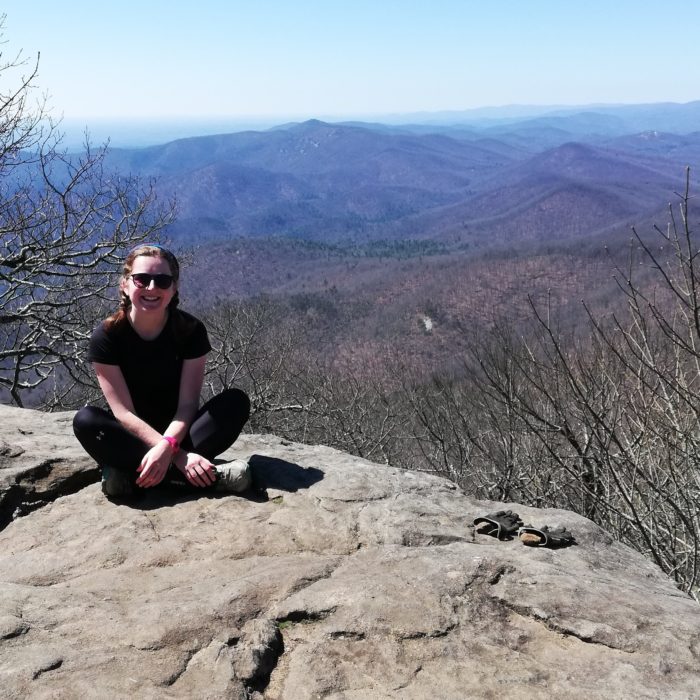 Apparently it’s not because of the accent, or the hair, the nerdiness, or the love of Harry Potter, but because of a really disapproving look I gave Slouch, which was very Hermione-ish!

Today is day eight and we’re neroing in Helen, a German-themed town that is a surreal mix of southern USA and the Alps. We have eaten, drunk beer, showered, and washed our clothes. Life is good! 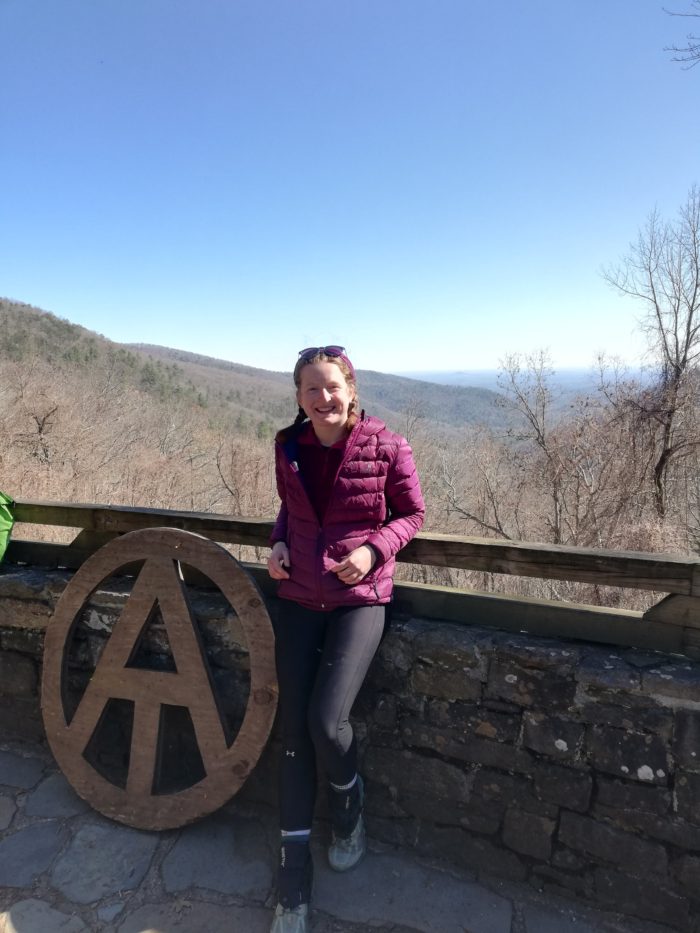 That was just a brief taste of how my first few days have gone. There is so much more I could write as every day is filled with so many interesting people and experiences. I know the honeymoon period will wear off eventually but for now I am having a great time. If the rest of the trail is as rewarding as these first 54 miles have been then I am in for an incredible six months!