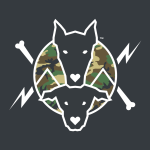 If you’ve watched the 1989 thriller Dead Calm, specifically the scene where actor Billy Zane’s character desperately abandons his sinking schooner to clamber aboard the serene yacht Saracen, you’ll get a feel for how motivated I was to end my AT thru-hike. Except I’m not a psychopath. 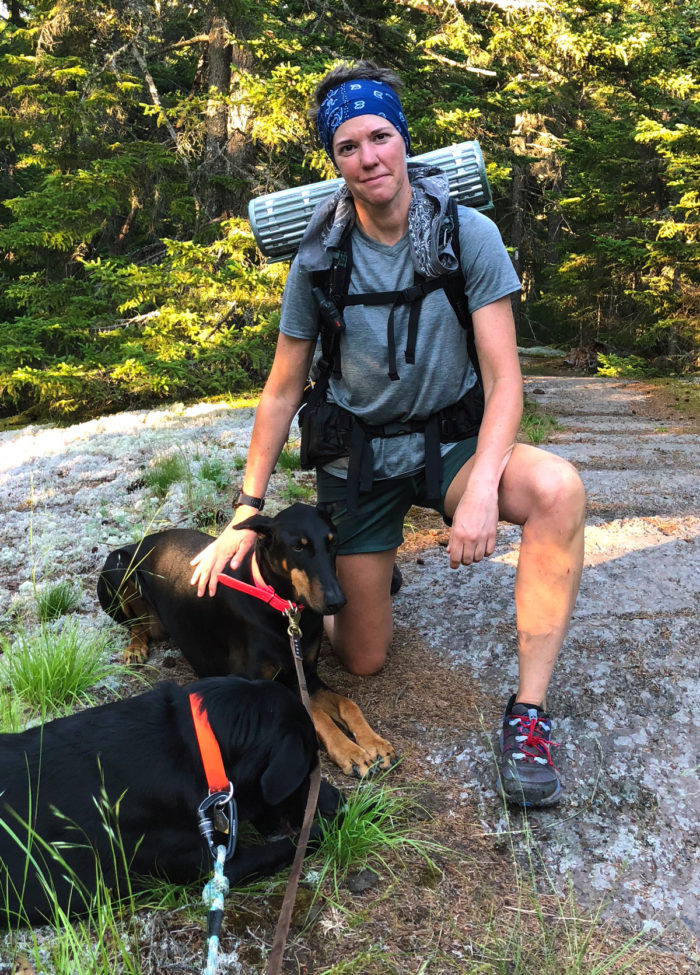 This photo was taken by my husband about two miles into the 100MW (from Monson) where he and our dogs hiked in to meet me. So tired, but so happy to see them.

Though not as dramatic, my drive for self-preservation while hiking SOBO was on-point to achieve one thing: get out of the 100-Mile Wilderness and off the AT for good. But how does one go from planning, preparing, and ultimately starting their thru-hike, to developing dream-killing feelings of dread? I quit my job for this, after all.

I now believe that for me to successfully complete an AT thru-hike, three things must be omnipresent: physicality, mentality, and luck. Yet on trail, I fumbled to keep all three within my grasp at any given moment. Finding that perfect state at one’s core is certainly achievable—yet rare—considering the relatively low success rate of completed AT thru-hikes. I’ll be right over here on the losing end of those statistics (probably taking dog pics).

Mostly, my state of mind was not unlike a coyote willing to gnaw off its own foot in order to escape confinement.

On trail, the significance of each element fluctuated, but for me, physicality was probably my best, most present attribute. I hiked 114+ miles—up and down Mount Katahdin in Baxter State Park and through the entire 100MW—in just shy of a week. No blisters, no sprains, no broken bones. Just minor aches, scrapes, and bruises. I slipped and fell a number of times—twice in frigid streams—but never truly got hurt. I credit my trekking poles for taking most of the beating by giving me the balance and support to navigate those endless roots, rocks, boulders, and bogs. And mountains.

My whole world became this narrow, gnarly, angry path, with only white blazes and a GPS app to guide me to the comfort of familiarity.

Maybe it was my long legs. Maybe I was in good enough shape. Mostly, my state of mind was not unlike a coyote willing to gnaw off its own foot in order to escape confinement. Nobody wants to see that dog pic.

Which brings me to mentality. The word I use most frequently to describe my short time on trail is “terrifying.” But not in the jump-scare sense of the word—I was simply inspired by dread. My whole world became this narrow, gnarly, angry path, with only white blazes and a GPS app to guide me to the comfort of familiarity. It became less about the experience and more about direction, distance, and time.

I met up with my husband, Jeff, and two dogs on the afternoon of the second day (Sunday) of my thru-hike, AT mile 15.1 near the entrance to the 100MW at Abol Bridge. We made plans to meet again on Jo-Mary Road, a private logging road that crosses the AT at mile 56. These are the unedited notes I made on my iPhone before setting off. I sound like I’m trying to decide whether to get the tall, grande or venti latte, absolutely clueless about what I’m about to face:

I made it to Jo-Mary Road at 6 on Tuesday evening, setting the stage for the rest of my 100MW hike: get in and get out, quick. If anything set me up for failure, it was this unreasonable drive to reach our next rendezvous. I dreaded being out there, away from Jeff and the dogs. When I started hiking early the next morning (Wednesday), I had every intention of allowing four days to complete the remaining 58.5 miles in the 100MW, telling Jeff I couldn’t do three nearly 20-mile days. Wrong. As I explained to someone I had passed the day before: my brain set a cadence that my feet couldn’t ignore.

I began each morning with a clear mind-set. It was pointless to concentrate on anything but putting one foot in front of the other—it was so rugged. But by midafternoon, I started struggling with whether to camp at the nearest shelter or push on to the next. I always chose to push, opening up the floodgates of dread, especially when dusk set in and I found myself at risk of being caught on trail in the dark. God. Yet the reward of having fewer miles to cover was always worth the fear.

Which brings me to luck. Or faith, or sorcery—whichever term you prefer. For the most part, luck was on my side. It only rained (sprinkled, really) for a minute. I saw two moose! I met just the right person at just the right time (Camo, who told me during a personal low point one late afternoon—you may have a head full of doubt, but there’s a road full of promise.)

Bugs weren’t a big deal for me, despite all the warnings. True, I was slathered in Permethrin, Picardin and DEET, but I’m one of the fortunate with blood that repulses mosquitoes. I didn’t get sick or contract any of the common trail maladies: hantavirus, norovirus, Lyme disease, oh my. My gear selection was perfect for me—nothing under or overkill. And perhaps luckiest of all—the 5mm kidney stone that was lodged in my ureter sat dormant until shortly after my decision to end my thru-hike.

Sure, I had moments of bad luck/poor decisions. I began my hike on 7/7 and ended on Friday the 13th—my best/worst day on trail. Best because I made it out of the 100MW unscathed. Worst because I made a navigational error near the end, causing me to hike an extra 2.6 miles and producing a feeling of self-loathing like no other.

But even so, my decision to end my thru-hike came from a place of absolute certainty. In fact, the only regret I have is calling myself a thru-hiker at all. Nope. I’m happy to be just a plain old hiker (if that).

I wonder if Danica Patrick needs a new logo.

Hello friend. I'll attempt my SOBO AT thru-hike starting in July 2018 with the trail name TBD (Team Black Dog), not to be confused with To Be Determined. I assure you, I'll walk with determination—at times with a black dog (or two) by my side.