There’s this tension between being together and being alone.

On the loneliness side of things, there’s the fact I’m out here by myself–meaning not hiking with a friend–and that’s kind of tough and scary and sad … but also marvelously liberating. All that time to think, daydream, recharge. My inner introvert revels in it.

Until it doesn’t–which takes less time than I’m ever prepared for. Suddenly I’ll realize I’ve been hiking for hours without seeing another human, and I’ll try to recall whether any of the people I’ve been getting to know will be in the shelter ahead of me, the one I’m planning to stop at, and I’ll realize: no, they won’t. Of course there’ll be others, but who knows whether we’ll connect?

On the camaraderie side of things, there’s the fact that thru-hikers are awesome people. I’m astonished at how easily and quickly I like them, how little time it takes for seeing one unexpectedly after 36 or 48 hours of not to make my heart brighten and fill up.

My first night in the woods was at Hawk Mountain Shelter, at mile 8.1, and I met a number of people that night whom I’ve continued to run into: Benji; Dregs and Melissa; Bones; Atman; Lightning and her dog, Thunder; and the Count. Lightning was section hiking; she got off at Neel Gap and we miss her. Dregs and Melissa got a cabin for our overnight in Neel Gap and I stayed with them and Benji one night and with Benji, Atman, and Jackrabbit (who, as his name implies, has now hopped far ahead of the rest of us).

The day we got into Neel Gap, we hiked over Blood Mountain, and we sort of assembled into a pack or bubble despite not all having stayed in the same shelter the night before. Just before the toughest part of the Blood Mountain ascent, we were all watering up at a spring and appreciating the fact we had collected.

Then we made the long, slow climb up into the nicest, sunniest, clearest day yet and shared a rock perch at the top, eating lunch.

But two mornings earlier, I had been frustrated by how crowded the trail had been. I’d reached a nice lookout place and turned my phone off airplane mode to call Inti. He declined the call with a text: “I’m in a meeting.” I waited for my phone to buzz up with all the texts I’d missed the previous night, but … nothing. I stood there feeling despondent, and then Benji and Lightning showed up and shared the view with me, checked their phones, sent out some texts. When we were all ready to move on, I said, “You guys go ahead; I’m going to pee,” but just then an entire class of fourth-graders appeared, all chaos and exclamation.

Benji and I gave each other the arched eyebrow. Guess I’d have to wait to pee.

We started walking and then spread out–Benji out front, then me, then Lightning and Thunder, until I reached another summit and pulled out my phone again. I texted Inti: “No text last night? :(?” He called immediately, and when I picked up I started telling him how sad I was to get his “I’m in a meeting” text and my voice broke and just as he was saying that of course he had texted the night before, and this morning, and he’d called me right back after I tried calling him but it had gone straight to voicemail, which of course I suspected because he’s Inti and there’s no way he wouldn’t, I heard Lightning and Thunder come up behind me and I heard my own voice, how intimate and private a moment I was having, and I cursed the lack of privacy on the trail, walked farther off trail, tried to get away.

The trail’s lack of privacy to do things like journal, blog, read, or call your boyfriend and cry is real. Also a thing–hours of walking in the late afternoons with absolutely no human encounters.

To address this, on my early, low-mileage days, I have stopped for a 10:30 a.m. journaling hour with my back against a log, and I’ve thrown down a few yoga moves after lunch. But as the miles add up, I have less time for long breaks. But trail management is another blog entry …

Three days later I came into Blue Mountain Shelter at about 4 p.m. and not a single one of them was there–no Benji, no Atman, no Bones, no Dregs and Melissa, no Hoot and Padfoot, no Grits and Rook. Oh, it was lonesome.

The shelter was full of new-to-me people, and we stood around chatting, and they were just as cool as the friends who’d gone on ahead of me … there was Ceesh (for C-sharp) and El Jefe and Crazy Ivan and Teddy Bear and Curry Toe and Scar and 3 Times … they were all great. But a bunch of them had done 14 miles that day and 16 the day before, and they had all started long after I had but were already where I was, and it dawned on me that my plan to start slow wasn’t something a lot of people shared.

I wanted to hustle and see if I could catch up to my friends, but so far I hadn’t had any pain and I attributed this to sticking to my start-slow plan. I’d read about people pushing it to stay with a pack, and read about those same people being forced off the trail altogether due to injury. Hike your own hike, Matti. You’ll make new friends. But I wasn’t sure that was true. What if everyone really was faster than I?

I woke at 5:30 that morning and knew I was done with sleep for the night. Although it was still dark, I decided to get up and get out of camp. Blue Mountain Shelter is on a summit, and when I emerged from my tent I saw a thin line of hot pink and orange through the black tree branches, out over the distant mountains. “Wow,” I whispered.

Coming back from the privy I heard a flapping whoosh and saw movement in the shadowy dark just in front of me. My headlamp was set to red–just enough not to trip over roots or tents–and I stopped and stared, looking for the creature that had done that, but I saw nothing. I took a few more steps and heard the flap-whoosh again, and then a loud hooooot, and then I saw the owl flap back toward me and settle onto a branch just yards away.

I turned on my headlamp and pointed it straight at the owl, which was looking away. It turned toward me and stared straight into the lamp as I took out my phone and fumbled with zoom. 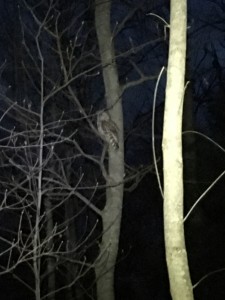 So my morning went really well even though I felt my friends had moved on.

A few hours later, I heard someone come up from behind and I stepped aside to let him pass, but it was the Count! I laughed and said “Hey!” and he smiled and said the same and we acted like long-lost friends despite having previously exchanged no more than a thousand words.

And last night we shared a room in Hiawassee, where we met up with Atman, Benji, Grits, and Rook for a Mexican meal. And we’re all from different places and stations in life and I can’t imagine any circumstances aside from this one that would bring us together, but the closeness and connection we all felt last night, breaking bread, toasting Benji’s 29th birthday, more than made up for that lonesome night up on Blue Mountain. 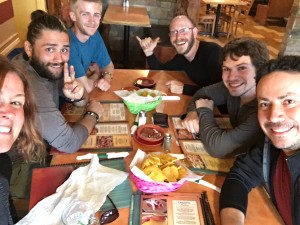 Me, Grits, Rook, Benji, Atman, and the Count of Monte Cristo