Somewhere In The Middle

The next time you walk in a straight line, stare at a point in the distance and notice how much the objects in your periphery are bouncing. Of course, your brain has conditioned itself to filter out this bouncing, and you feel like you are moving along a smooth straight line. It’s one of those things like breathing, or blinking. Now you know you’re doing it, and you can think of nothing else.

But, because we so rarely notice these things, we know that it is possible to exist in a state of mind where such mundane functions do not register; they go on without you. The true measure of a good movie is that you forget you’re holding popcorn. You pull out of your driveway and into your parking spot at work and have no memory of the drive. The same thing happens when you’re hiking. You’ll pull an empty water bottle from your pack and not remember having taken the last swallow. What time is it, you wonder. You don’t even know what day it is, that’s how far into the zone you are. This is good. This is several levels beyond thinking about blinking.

Now that you’ve stopped, you begin to notice your body. Has it really been six miles since you took off your socks? Your entire skeleton hurts again, and with that sensation comes the memory that your bones have actually hurt all damn day. Somehow you’d forgotten. Must have been the walking.

You start up again, but somehow it’s not quite the same. You lurch a bit. You bounce. You tighten your straps and wiggle a bit, but that doesn’t help much either. Whatever. Forward it is. This is the middle. Congratulations, you are somewhere in Virginia. By this point you have switched from names to numbers when you make plans in the morning. “Let’s see, we’re at Six Twenty-Two… If we can be out of here by noon for once, we can make Six Thirty-Nine by dark. But only if we hustle.”

Maybe the people you wish you were having this conversation with are actually miles ahead, or behind. Or worse, home. It’s not likely, but you might even be alone. Perhaps you’re one of those weirdos who started in January. Maybe you read something about a guy with a tuba, got all worked up and started in May. Either way, you’ve been up on the ridge for what, two, three days?

Sugar! Sugar will help. You reach into the zipper on your hip and pull out a ziploc bag full of Gummy Worms or Sour Patch Kids and greedily inhale a handful. You snort with delight as you lick the sugar from your lips and fingers. If you’re a guy, you still have crystals in your beard from last time. What was that candy we used to eat as kids? The one that was literally just a bag of sugar. And there was a dipping wand, also made of solid sugar. You can’t remember the name of it, but you do remember eating it at a friend’s birthday party, the one where it was raining and everyone had to play inside, and there was that one girl with the pigtails and the stupid dress that was the same color as the couch that your grandma had in her basement where the old pool table is now, the one where you beat your brother and won five dollars, you know, the summer after Jordan peed on his neighbor’s rose bush, the one that was supposedly a prize winner at the fair the same year you got your braces off, the same year that Aunt Ferna crashed her car into a fire hydrant or was that a mailbox, how the hell were you supposed to remember, you were only like eight when that happened, and even though all that’s going on you notice that as you stare at a point in the distance the objects in your periphery are not bouncing, there is no sine wave, everything is smooth and straight and you are in the zone, so in the zone that you just glide down the trail.

You don’t even blink. 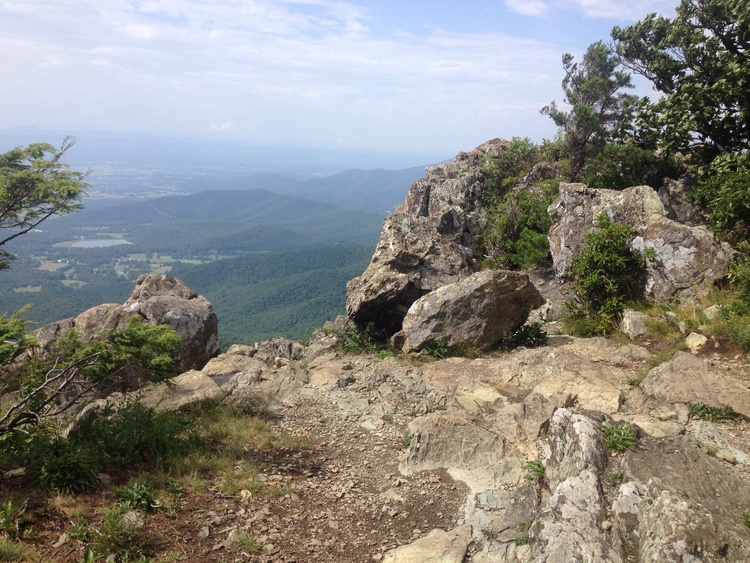