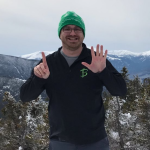 According to Urban Dictionary, shin splints are described thus:

“A pain below your knee from too much running – its a pain in the ass. You get it mostly from Track, and having too much sex. Soon to be classified as an STD.”
Unfortunately for me, my shin splints had nothing to do with track and even more unfortunately less to do with sex. My right shin hurts, and it’s due to overwork. It’s almost as though 770 of miles of trail can somehow have a real, tangible negative effect on the body. Who’d’ve thunk it.

I realized I had a real problem after ingesting enough ibuprofen to cover up the Iran-Contra affair and then it still hurt to walk.  My dumb brain was then like, “Hey dude, this is probably not good?” I didn’t even get the chance to exit somewhere cool, it was just one of those random parking lots along the Blue Ridge Parkway in Virginia. I went to urgent care in Lexington and found out that splints of this severity take weeks to fully heal.

And with weeks to fully heal, that torpedoed the hike I wanted to do. To get back on trail and finish would require a southbound flip flop or skipping ahead several hundred miles,  neither of which I want to do. Especially when my shin hurts all the time, it would suck to get back on trail. A comeback story this year would be much like the recent Obi-Wan Kenobi show, where it’s much appreciated but I wouldn’t be happy about it.

I hate being home. It’s boring, my leg hurts, and I miss to high hell everyone that I’ve been friends with on trail. Not to mention, falling this short of a stated goal is torture. I have so many friends and family blowing smoke up my ass saying things like, “We’re so proud of y0u, you walked so far, take pride in your accomplishment!”

There’s a part of me that knows it’s not my fault; injuries happen, and I was forced off. Still doesn’t make it feel any better. I want to be out there. And I can’t. And I hate it. I’ve been off trail for a week and a half now, and I know I can’t continue and I know I’m tired already of being here. Fuck me.

My name is Mike, aka Dipper, from Boston, MA and I’m heading my way northbound on the AT. Come see what’s on my mind grapes!