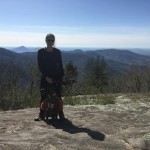 About a week ago I wrote a very vague post regarding my stay at a very popular hostel on the Appalachian Trail. However, I feel like it may be time to get a little more detailed.

Standing Bear Farm is the place in question.

We stayed the night there before starting our section hike. We arrived around 4:00, parked the car, and got to talking with one of the guys who work there. A guy named Gator.

Gator was clearly drunk when we got there. Within 20 minutes of talking to him he was telling us about a bad acid trip and the last time he’d done mushrooms. He detailed how he gets his weed delivered from the west coast and within an hour he’d had another couple of beers.

Then Gator disappears for a minute. He comes back and announces that there is a cancer benefit in town for a friend of his and if anyone wants to come, it’s 5.00 for all you can eat soup and the van is leaving in 20 minutes.

So my friend and I follow along in his car, behind the van, along with 2 other hikers who didn’t want to get a ride with Gator.

Gator takes us down these steep, rutted, windy back dirt roads. He’s fishtailing, and speeding, the van is bouncing and the passengers were getting tossed around a bit. The van window opens and Gator pours out the foam of another beer.

A few more tight turns later, Gator’s dodging oncoming traffic, these roads are pretty narrow with steep cliff on one side and a ditch and high wall on the other. Gator swerves to avoid a car and gets stuck in the ditch, van pitched at about a 40 degree angle. Several minutes of squealing, smoking tires later, Gator finally manages to maneuver the van back on to the road. He would later deny getting stuck because “I got it back out didn’t I?”

After more speeding and fishtailing and drifting around corners, we lose the van for a minute. When we catch up, it’s parked in the middle of the road. For a split second we thought maybe Gator was just waiting for us. He had said to keep close after all. But no, Gator had just gotten out to pee.

Eventually, close to 30 minutes later, we make it to town, park the car near the van and watch as just about everyone gets out visibly shaking.

Then we get to where the soup is. We weren’t there long, maybe an hour and a half. Gator runs and gets a 6 pack from the gas station across the street, he has another one while he’s talking to us, he goes outside for a while, comes back in 3 more beers short (I am 90% sure he shared some of the 6 pack with someone outside) and then has another beer at our table. At this point I have seen him drink 5 in the space of about 3 hours.

Then the pot cookies get passed around. He takes one, looks at it, says “they’re small” and takes another.

Gator is drunk at this point. Super drunk. He’s having a hard time walking straight, he slurring his words pretty bad, I offered to drive the van back to the farm for him but he just gave me an offended look and said he was fine.

When it was time to go, one of the vans passengers got in my friends car with us, another got a ride with the woman who owns the farm (she looked disappointed in Gator but made no attempt to stop him from driving back) and a third had another ride with someone else.

We wanted to follow the van back to the farm just in case something happened but it took off while we were getting gas. So we took the highway back to Standing Bear and it took us 5 minutes.

Gator finally rolls back in several hours later, yelling about everyone being too afraid to get back in the van with him.

Hi! I'm Kelly! Unfortunately my thru hike isn't going to happen as planned so instead I'll be starting a long ass section hike at the NOC on March 20! I'm a 27 year old lover of nature, reading, kayaking and backpacking. Eventually (maybe) I'll graduate from U Toledo with a degree in Environmental Biology.