Stories from the Smokies

There are new stories on the trail every day–some humorous, some sad, some inspiring. Here are just two very recent ones…

Her trail name is actually Fat Hen, but her childhood nickname from her grandmother is Meggedy Peggedy Little Fat Hen. I thought it was a fun name and an endearing characteristic of her grandmother to give all her grandchildren playful names.

Fat Hen (who isn’t the least bit fat) is hiking with Box Turtle for 12 days. They are childhood friends who live at oppossite ends of the country from one another. Apart from the 12 days with Meggeddy Pegeddy Little Fat Hen, Box Turtle is hiking the entire trail on her own. They are both 58 years old. I was delighted to talk with other women who were close to my age.

We struck up a conversation at one of the shelters in the Smokies where we had arrived early in the day and had lots of time to just visit with other hikers. I was curious about their matching hats. Both Fat Hen and Box Turtle had hats with the lettering B E S (T). Curious, I asked if there was any special significance to the writing on their hats–and that’s all it took to really get the conversation rolling! 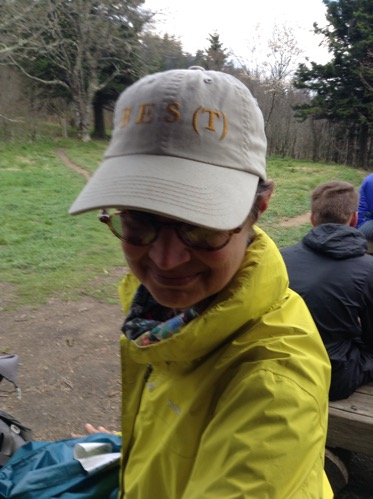 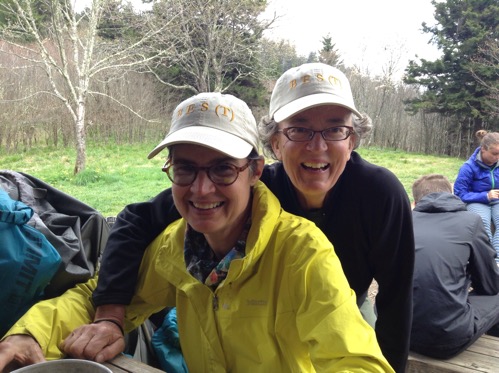 Fat Hen had  the hats made prior to meeting up with Box Turtle on the trail. They had decided ahead of time that the first person to ask them about the hats would win a prize–a prize they had been carrying in one of their packs for over a week. No one had yet asked so I got the prize for curiosity! The prize was a Goo Goo Cluster Supreme–a 1.5 ounce chocolate covered concoction of pecans, almonds, walnuts, cashews, hazelnuts and coconut packed  with a whopping 210 calories! It was a good energy snack for the trail! 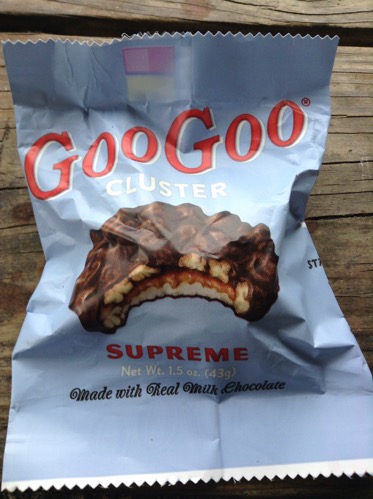 By the way, the B E S (T) on their hats stood for BadAss Endeavor Squad (Turtle Division)!

Early in the day yesterday, as we were hiking 11 miles towards our destination of Newfound Gap, we were told by two hikers headed in the opposite direction, that there was a Trail Angel down at the gap handing out food and offering rides into Gatlinburg. It was so early in the day at that point, we were hesitant to get our hopes up that he would still be there by 4:00–the time when we expected to arrive. But he was–and what a welcome sight he was at the end of a long, long  day! 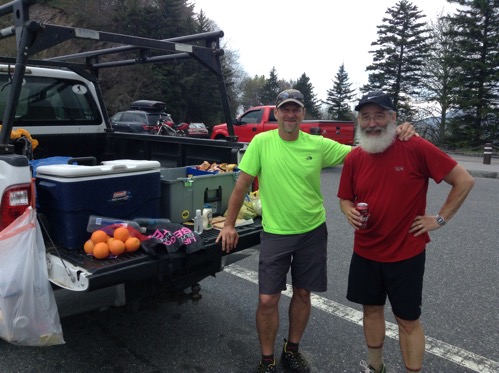 His name, we were to find out, was Godspeed. He had spent the better part of the day handing out food to hikers passing through. As the day wore on, he kept asking the hikers coming through, if there was anyone left on the trail. I imagine the story they told was about the little old couple still tottering down the trail. So he waited–with ham and cheese sandwiches replete with lettuce, tomato and mayo, as well as chips, oranges and soda! Heaven! And–he offered to take us into Gatlinburg to drop us off at a motel! That’s a 15 mile ride! Thank you, Godspeed! You saved me from performing my Ride Bride duties–which consists of looking pretty and standing in front of Mel to hitchhike (Well, maybe not the ‘pretty’ part). Drivers are more likely to pick up women than men so it’s a big advantage for a man to have a girl with him–even if it’s a very old girl!

Godspeed had a very touching story to tell as he drove us and two other hikers into town. Mel was sitting in the front seat with him and asked if he had ever hiked the trail. He had. In 2002, the same year Mel hiked the trail with his son, Matt, Godspeed started a thru hike with his son. A month into their journey, Godspeed became ill and had to go home to recover. Hiking the Apppalachian Trail had been his son’s dream, so Godspeed sent him off with his blessing to finish the trail on his own. His son, however, only wanted it to be a trip they did together, so he got off the trail as well. Not long afterwards, during a routine eye exam, the ophthalmologist discovered something of concern in the young man’s eyes. Further testing by a neurologist revealed that Godspeed’s son had stage 4 brain cancer. After surgery, radiation, chemo and many prayers by friends and family, his son survived the cancer. And three years after their original thru hike attempt, Godspeed and his son completed their journey. Now, part of Godspeed’s ‘ministry’ has been to ‘pay it forward’ We were a few of the lucky recipients. Thank you to all the angels on the trail. It sure is fun to find you! 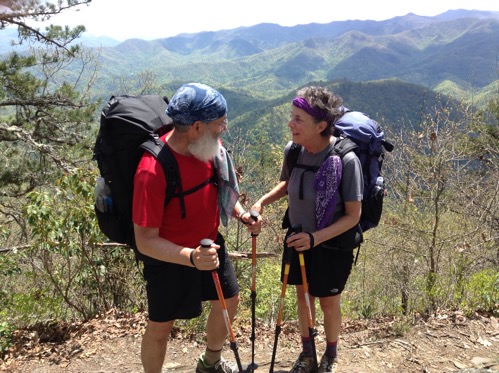