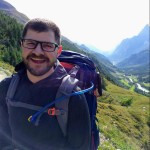 A couple months ago I went to visit a close friend in Massachusetts and we walked around Walden Pond where Henry Thoreau wrote Walden; or Life in the Woods. I had read parts of this book, but I didn’t start grasping the ideas until I walked around the pond. We watched the short documentary about Thoreau and his many accomplishments shown in the visitors’ center after. Upon returning to Michigan, my adopted home for the last five years, I realized that I had learned the lessons I was to learn from this experience. I was now prepared for a new path for which to enjoy and of which to learn. Anxiety was replaced with a new peace and a few days later I realized what was next.

I was introduced to the Appalachian Mountains at age seven when my family took a vacation to the East Coast. I remember fondly waking up at our hotel in the Shenandoah Mountains and seeing the sun rise over the mountains, casting a warm golden glow through the sparse fog that had settled in the morning air. This was my first experience with mountains, and although the Appalachians aren’t as tall as many other ranges, they are majestic in their own regard.

Years later I returned to the Appalachian Mountains on a not-so-carefully planned bike trip between Pittsburgh, PA and Washington, D.C. Not-so-carefully planned because I only took two days to prepare for this biking trip. With a little more than my single-speed Trek Earl, a new rear rack, my day pack, and bungee cords, we set off on a 335 mile, five day trip that would provoke my thirst for adventure. It was fun, tiring, and ultimately rewarding. Temperatures rose above 100 °F at least a few of those days, and it rained (poured!) twice. Despite the exhaustion that averaging 67 miles a day can invoke, we were mostly smiles and jokes. This was especially true if we were enjoying a trail meal at our favorite resupply, Sheetz. Reward doesn’t come without sacrifice, and we certainly sacrificed comfort for fun and companionship on that trip. 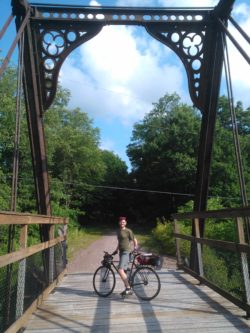 Ever since that bike trip in 2014 I have been thinking more seriously about the Appalachian Trail. It no longer seemed like something other people did, but something I could do. And it started to become something I wanted to do. When my rather traditional life stopped making sense and effort didn’t necessarily equate to reward as many Americans think it should I began to question what I was working and living for.

Life is a journey and I have been fortunate to share this part of my journey with many kind folk. I’ll be forever grateful for the incomparable insight and guidance my family and friends have provided me over the past year. I’m thankful for the patience that my colleagues at Ford Motor Company extended to me in the same time. Without either of these I may have had to make quick decisions that wouldn’t have allowed me to reach the conclusion to hike the Appalachian Trail this year. I’m grateful I have this opportunity at all.

Hereafter I’ll focus on the hike and less on myself — what gear I’ll be using, what my plans are (flip-flop? sobo?), what music I’ll keep on hand, and what I’ll have loaded on my Kindle to read (although that might not make it beyond the pack shakedown).

And then, of course, the fun part — the hike itself, which I plan to begin at the end of May.

Hey ya’ll. My name is Corey and I will be southbound on the Appalachian Trail for summer and fall of 2018. I was most recently employed as battery engineer working on electrified vehicles, though I really dig bicycles. I am originally from Buffalo, NY.