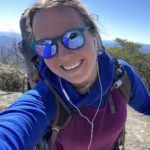 There is a comment often made on the trail. We all agree that, to a certain extent, there is something a little bit off about each of us. You have to be at least a little bit odd to want to hike for months at a time. And to be perfectly clear, that is not an insult. In fact, I find that trait endearing in most people. But if you want to know why I fall into that category, I’m blaming my parents.

My first day hiking started like most others, I’d imagine. My parent’s dog, who was my roommate at The Lodge, decided he was going to learn how to open a sliding glass door, and walk himself up to the main entrance of the hotel, all because he seems to have a strange interest in automatic doors. 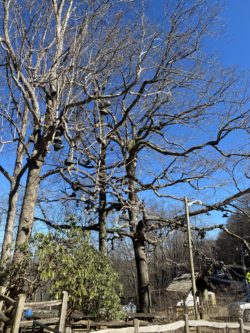 Wait, you’re telling me that the rest of you didn’t have to drag a pup, who just wanted to make new friends, out of the lobby? I had worked up a sweat before I had even finished filling my pack.

After that, it really was a pretty basic start to the day. I got my hiker tag, sat through a short orientation, and already learned to love the Georgia ridge runners. I took pictures at the arch and watched as my mom cried, which prompted another woman to start crying as well. A full-on stranger was brought to tears because of us.

Now is time to show you why I blame my parents for being out here. I hugged my mom, and she told me, “I can pick you up anytime you want. Just call me, I’ll be there in a day. You can quit anytime, and if you want, we can hide you away until August and just pretend you finished.”

Then I hugged my dad, who said, “Don’t listen to anything your mother says. If it gets hard, keep going, because this will be the most incredible experience of your life.”

If I had to boil it down though, this mentality is definitely one of the reasons that I feel so comfortable doing things that others might find extreme. I have always been told that I can do anything, and I don’t mean that as in, “you’re capable of achieving anything,” I mean it as in, “any and all options are always available to you.” My parents, while constantly contradicting each other, also made sure that I would always feel confident in all my decisions. 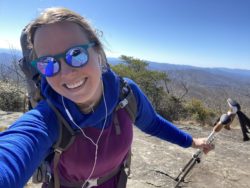 I usually do go into something knowing that I made a good decision. On my first day on the Appalachian Trail, or not even officially on the trail I guess, I found myself in a weird position. I was doubting myself. Do you know how many freaking stairs there are at Amicalola Falls? Because I don’t know, I lost track somewhere around 250. And then I had to climb so many more. It was beautiful, but I literally got lapped by a family. Who decides to climb that twice? In an hour? The family who passed me on their way down, and their way back up, and then again on their way back down decided to do that.

To say that the rest of the day was easier would be disingenuous. I spent most of my first day asking myself over and over again, “why didn’t you train more?” Now that the first week is over, I’ve stopped asking that question, because simply getting out there and climbing things day after day did more for me than my training plan did in months. I might have saved some money on the ibuprofen if I did train a little more, but who doesn’t love a thrice daily ibuprofen party?

I rolled into my first shelter late that afternoon. Black Gap Shelter is still on the approach trail, and I sat there, absolutely spent, and disappointed that I wouldn’t be able to “officially” start until the next day.

As the week went on, it stopped feeling so incredibly new and exciting, and instead, it started to feel like the first week of school. I met so many new people and found my stride among the ones with a similar pace. I managed to make it 38 miles, with one resupply, and one cabin stay. (Blood Mountain Cabins in Neels Gap, it was magical, and exactly what my damp gear needed.) 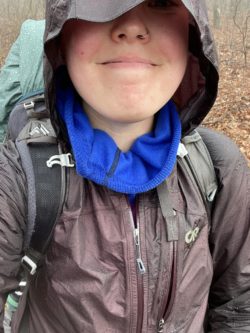 During my first week, I learned a lot of things though. For instance, I really really wish I had gotten some people’s contact information. It initially felt a little rushed, especially because I was seeing the same people almost every day. I thought I had 2000 miles to exchange social media and phone numbers, but when people are starting out they don’t seem to start at their “real” pace. Eventually, the fast people take off, and the slow people settle in, and you’ll be somewhere in between, but you might not ever see them again. (Note: I refer to anyone faster than me as fast, and anyone slower than me as slow, and you should too because there will always be someone faster than you and someone slower than you, and both are normal and totally okay.)

I also learned that off-trail mileage is the absolute worst.  On day two, I stayed at Hawk Mountain Shelter, and it felt like that walk to the water source was longer than anything I had hiked that day. And to make matters worse, I couldn’t stop thinking, “this distance doesn’t even count.” 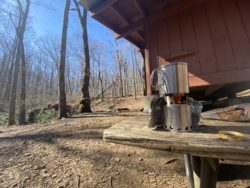 On day seven, I stayed at Whitley Gap Shelter. Take my advice, don’t do that. It wasn’t a long day, and I was coming off of my cabin stay, so I should have been thriving. In theory, a shelter that was 1.2 miles off the trail shouldn’t have been that bad.

Once again though, every step was haunted by thoughts of, “this doesn’t even count,” “who even wants a privy anyway?” or my personal favorite, “ugh this is the worst.” Did I make it through relatively unscathed? Sure did. Did I meet some hikers that I’m happy to have as part of my experience? Sure did. Did I regret it anyway? Sure did.

The final thing I learned is that sometimes you just have to say, “yes” to things that you otherwise wouldn’t in your normal life. When a man, who is considerably older than me, asked, “want to share a cabin with me tomorrow?” I didn’t even think about it. When someone handed me a chunk of cheese that had not been properly refrigerated, I said, “ooooh! cheese!” I’ve also taken so much food from strangers. In one week I have disappointed my mother and her stranger danger rules, and my favorite college professor who taught me about every foodborne illness in existence.  I hope I don’t have to write a post in a few months about learning how to say “no” when I’m back to “real life.”

Overall, I loved the first week. It 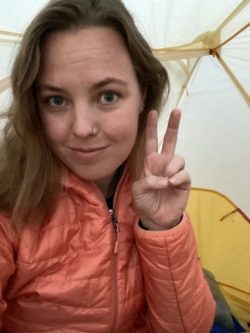 was hard, but mostly physically, and I knew it would be. It was also mostly pretty nice weather, with breathtaking views, great conversation, and so many incredible people. On top of Blood Mountain, I found myself thinking, “if I fall on the way down, and this ends my hike, what an incredible experience it’ll still be.”

How lucky am I that I’ll have about 21 more weeks to make it even more incredible?

Hey y'all, I'm Ashley, Ash, or Asterisk. I'm heading north on the AT. I've day hiked around the USA, but I'm relatively new to backpacking, so I figured that if I'm going to do it, I might as well go all in. Right? You can follow me on TikTok @HikeWithAsh