Posted on the road back home!

After we left the Super 8 and had breakfast, we were going to have to hitchhike one more time to get to the trailhead 5 miles away. Drats! But it was a busy intersection and we were optimistic about our chances. Fifteen or twenty minutes into our wait, a car stopped to pick us up. Oh joy! It was a woman in her 40s who likes to hike and often picks up fellow hikers to help them out. We were so grateful! 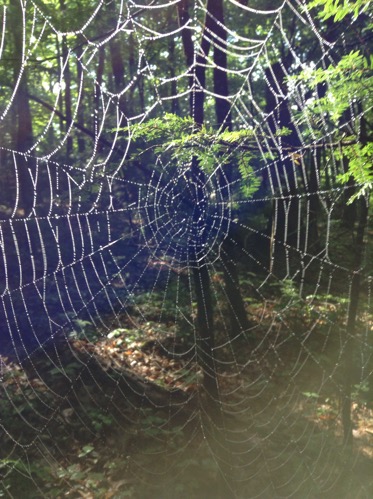 As usual, the start of our hike out was all uphill–for hours. It was so humid! The worst part though, was the spider webs across the trail. There were hundreds of them and they were in our faces and in our hair–or sticking to our arms and legs. I really hate it when I plow my face right into the center of a big web and there’s still a hungry spider in the middle! It’s really hard being on ‘spider patrol’– walking in the lead and continuously waving one hiking pole up and down in front trying to knock down webs before they hit us in the face! It doesn’t always work and it’s a very tedious job because we are also looking out for snakes and bears and ankle breaking rocks!

We stopped at the Jim and Molly Denton Shelter for lunch. It’s kind of a deluxe shelter with a deck and double wide Adirondack chair, a solar shower, lots of grass, a pavilion with a picnic table, and plenty of nice places to camp. 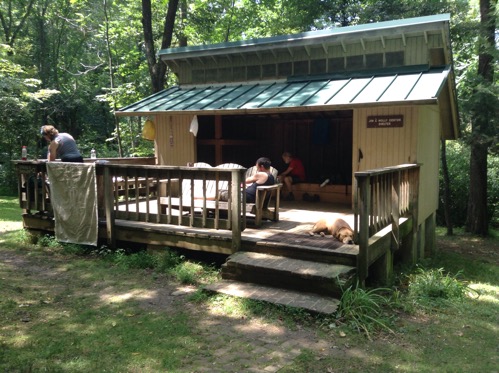 The Jim and Molly Denton Shelter

The gnats and the heat continued to plague us the rest of the afternoon. It got so bad that I had to put on my gnat glasses. (The glasses I wear to read and to keep the gnats at bay!) Once we reached the shelter, the gnats seemed to stop bothering us. Unfortunately, the ‘no-see-ums’ and the mosquitoes took over where the gnats left off! 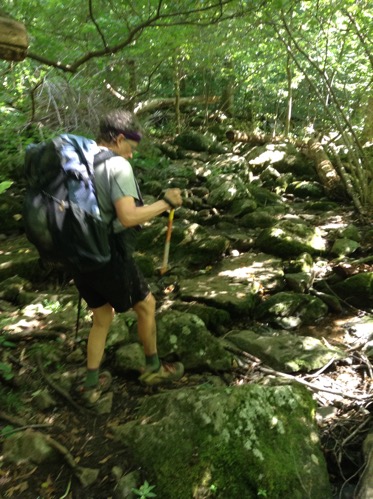 We left Manassas Gap Shelter at 8:00 a.m. in the cool morning air. It felt so good; and it stayed pleasant most of the day. By afternoon, the temperature probably creeped up into the 80s, but it wasn’t humid, and there was a breeze. Not a bad day for hiking. We just plodded along slowly fighting off the spider webs and the gnats–until a bear fell out of a tree! I didn’t know bears could fall from trees, but that’s just what it looked like. At first it sounded like a huge limb falling from the sky, but when we looked up, we could see something large and black falling down near a tree about 50 feet in front of us! It was hard to tell exactly what happened, but we backed away, hoping the bear wouldn’t blame us for his sudden misfortune!

After waiting for 15 or 20 minutes, we cautiously walked back up the trail yelling “HEY BEAR! HEY BEAR!” (Backfire’s call) and “YOOHOO! YOOHOO! (My call).

That was our excitement for the day!
Tomorrow we have the ‘roller coaster’ to contend with– lots of ups and downs! 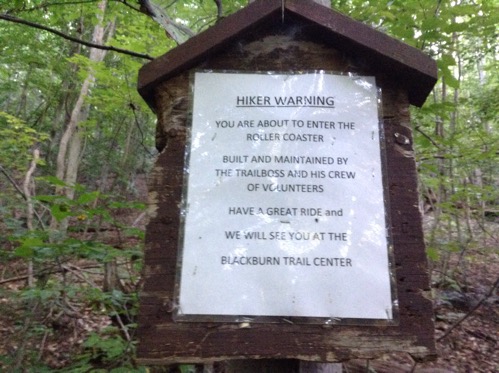 OMG! Today was hard! The section today is called the Roller Coaster for good  reason–ten miles of rocky ups and downs (and three more miles tomorrow!) My feet hurt, my brain hurt (from concentrating so hard), and my skin hurt (from sweating so hard). It took us 7 hours to do 10 miles (including breaks). We were so relieved to get to the Bear’s Den Hostel and take advantage of their ‘Hiker Special’ –for $30 you get a bunk to sleep in, a shower, laundry, a large pizza, a can of soda and a pint of Ben and Jerry’s ice cream! In the morning, you can make yourself pancakes on the griddle. Quite a deal! In the old days, Backfire would have eaten the whole pizza and the whole pint himself, but this year, we shared the calories! 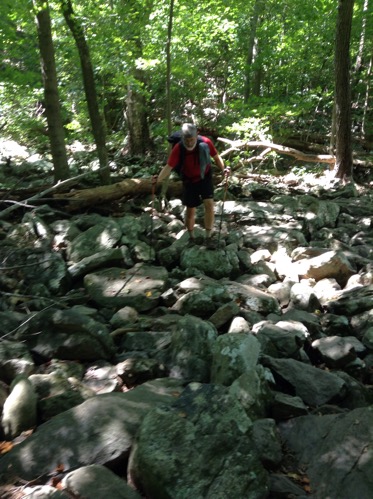 The Bears Den Hostel is a beautiful old stone house built in 1933 that fell into disuse when the owners died. It is now owned by the ATC (Appalachian Trail Conservancy). There is a big, comfortable living room that is available to hikers/guests from 5:00 to 9:00 p.m. The kitchen is also available during this time. 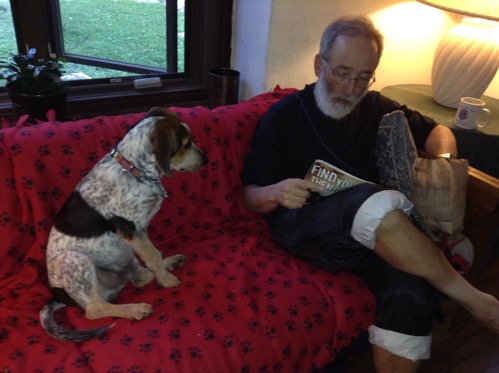 After we ate our pizza, we sat on one of the couches in the living room and relaxed. Glen, the caretaker, and his cute little dog, Chang, spent part of the evening visiting with us. Glen was very entertaining with lots of amusing stories about hikers and other guests who have visited the hostel. We enjoyed his company as well as Chang’s (our doggie fix). 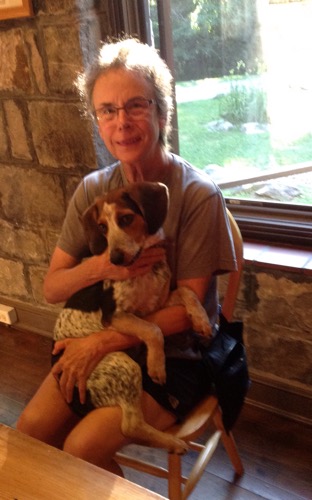 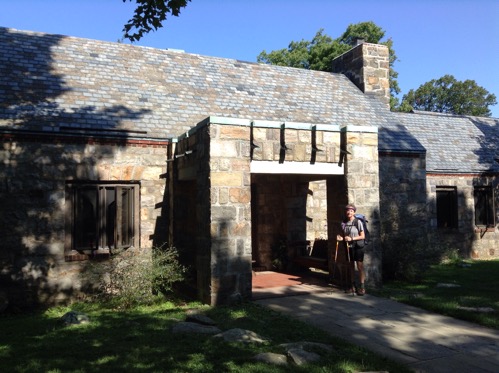 We slept in one of the bunkrooms with five other hikers: a man and his eleven year old grandson, a guy from England whose trail name is ‘England’, and two other  hikers we’ve met before, Romeo and Dale. Once again, I was the lone woman. 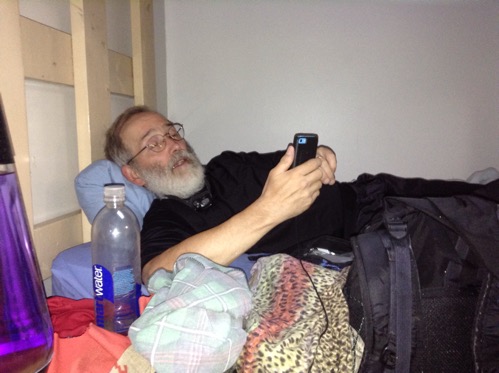 This morning, Backfire got up early, mixed up the batter for pancakes and got them cooking. Normally, I’m not very fond of pancakes, but, under these circumstances, a freshly cooked breakfast tasted delicious!. And it was very enjoyable sitting at a table, eating with silverware, listening to more of Glen’s stories and talking with other hikers. Very civilized! 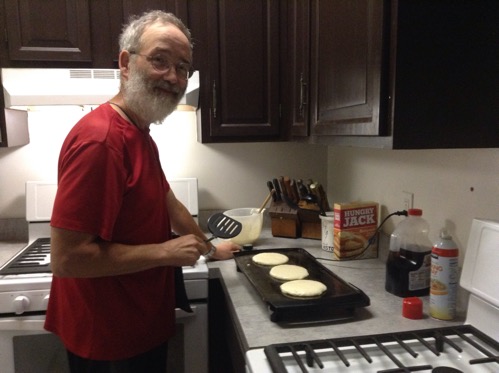 It was 10:00 before we got on the trail! The day started out cool enough and pleasant enough, but the temperatures eventually got into the mid eighties, It wasn’t particularly humid, but it was hot enough to work up a good sweat, especially on the uphills–and there were quite a few of those given that we hadn’t yet finished the ‘Roller Coaster’ from yesterday. We also had the ‘Devil’s Racetrack (lots of rocks!). It was a very hard day with all the rocks, hills, heat and gnats. 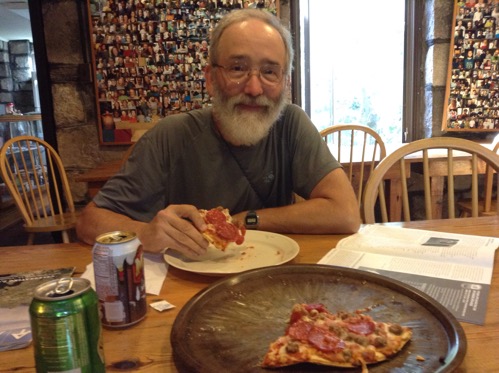 On our walk today, we ran into a group of servicemen who were out doing a team building exercise and they were excited to be talking to ‘real hikers’! Too funny! One sergeant even took a selfie with us –like we were celebraties or something!! We talked with them for quite awhile and then thanked them for their service to our country. 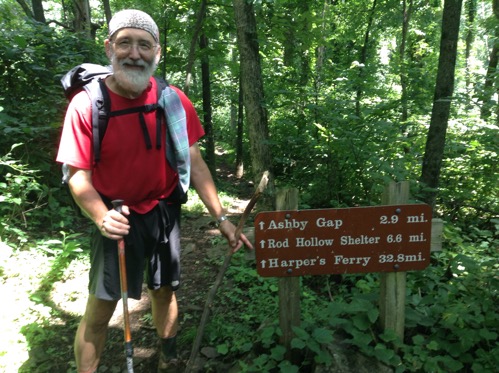 Getting closer to the end!

We also ran into our third southbounder or SOBO. The first one, Terrapin, we met at the McDonalds in Front Royal. The second one we met on the trail, but didn’t get his name. Today, the young man’s trail name was Euchre. He was about to fly by us in the opposite direction when Backfire said, “Are you a southbounder?” And that got the conversation going when he answered back, “I am now!” Originally, he had started in Harpers Ferry and gone north to Maine. Today, he had started at Harpers Ferry and was headed south to finish in Georgia. When we said we were from Michigan (he is too), Euchre said, “I know you!! I’ve read your blog. I was hoping I’d run into you!” How’s that for a small world??

We also ran into an ‘Eastbounder’. It was big and black and slithering across the trail in front of us!.  Backfire thought it was a harmless rat snake–better than a rattler or a copperhead!.
This is our last night out in the woods. The cicadas are conducting a rather loud symphony! I hope when we get home, that it will be cool enough to keep the windows open so we can still hear the frogs and insects and birds. 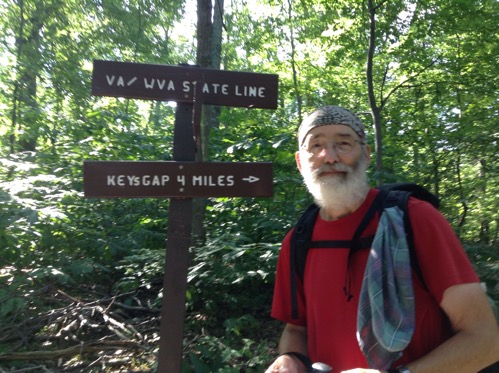 Tomorrow, we have about nine miles left to walk into Harpers Ferry. They look like easy miles, but the map never shows rocks and roots, so we’ll see. It will certainly be a happy-sad day.

We set the alarm for 5:00 a.m. so that we could get an early start on the day and hike while it was cooler. It was still pitch black out when we got up so even the birds weren’t awake yet! We both had our headlamps on and packed up all our stuff as quickly and as quietly as possible. By the time we left at 6:30, it was light enough to see and the birds were awake to send us off.

The map showed a relatively easy trail down to Harpers Ferry and we thought we could sail right in. We didn’t. First of all, maps don’t show rocks. Rocks are bad. They slow us down and hurt our feet. The next bad thing was Backfire’s left foot. He’s got plantar fasciitis and the heel has been getting more and more painful over the last week or two. Today was the worst. This is a man who rarely takes pain medications but he needed three of them to keep the pain at bay this morning. My feet were doing a little better than his, but I was wincing every time my left baby toe was compressed because I had a flaming hot corn between the toes that hurts like hell when it’s squished.

Between the rocks and the pain, it took us much longer than expected to get to Harpers Ferry, but we made it and still had time to spare when we got there so we had our pictures taken for the log book, bought a few gifts and just relaxed a little bit before our ride arrived. 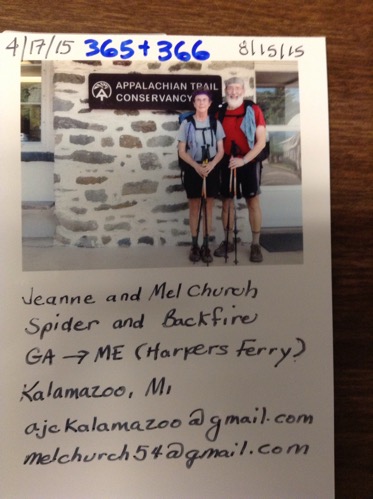 So just like that, our epic adventure is over! Four long months, 1023 miles, a half dozen bears, two rattlesnakes, one rabid skunk and a million memories! Poof!

It was hard. It was fun. It was exhausting. But we did it! 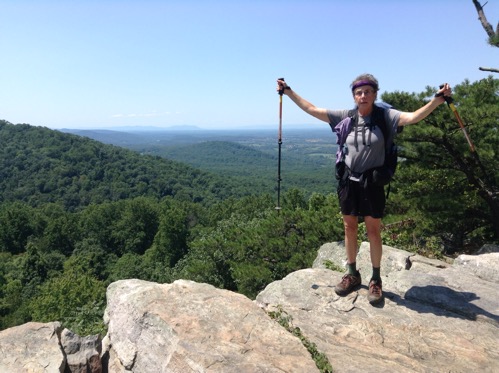 from The Spider Diaries