It was hard leaving a warm room in the morning in Port Clinton.  Once I left the hotel I was soon pulling off layers in order to climb the steep slippery hill back to the ridge.  It was the first time I had had my full pack in four days and it felt as though someone had tossed a few rocks inside.  I struggled with the rocks and wind throughout the day making slow progress.  Luckily I ran into some water right before my campsite and was able to fill up.  I was alone at my campsite and realized there was a nice fire ring with logs to sit on.  I decided to make my first fire by myself on the trail.  There was a bunch of wood already gathered so I just grabbed a little more.  I used a little toilet paper for a starter and soon had a beautiful fire going which I thoroughly enjoyed for the next two hours. 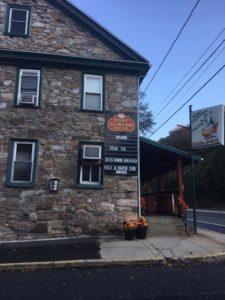 It was chilly the next morning and I set off wearing a lot more cloths than usual.  I was feeling a little faster and didn’t have to stop as often as the day before.  Towards the end of the day I stopped at the 501 shelter to get water since there was a spigot there.  It was a huge shelter with 12 bunks, completely enclosed to keep in the heat, and another shelter that has delivery.  I slowly dragged myself away from the wonderful shelter to get in a few more miles that evening.  I learned an important lesson as it became dark.  Thriller audio books are great for walking, but not night hiking.  Someone in the book was running for their life in the dark and I couldn’t help but look back every few minutes and when I got to the shelter I kept thinking someone else was there and couldn’t fall to sleep later that evening.  On the bright side I had a really good meal that night.  I made a knorr chicken rice side and added all my spices, hot sauces, and cheese and it was delicious!  My trip was coming to a close very soon so I was trying to use everything up! 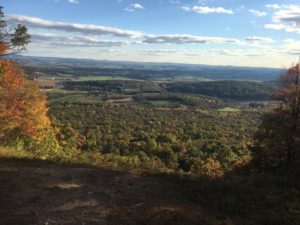 It was a very chilly night but I couldn’t sleep in long because I had to resupply and hike a lot of miles.  Luckily the morning flew by.  The trail was mostly flat ridge walking and I only stopped once on my way to the road.  Once there, it took a few more minutes than normal, but a park ranger picked me up and brought me into Lickdale, PA.  I headed to Subway for lunch and then walked over to the Loves gas station where I would resupply.  I was able to plug in my electronics and go buy some essentials (pop tarts, bars, cheese).  I was glad I still had some food remaining because I couldn’t find many of my usual items (crackers, knorr sides, etc).  When I was finished shopping I packed up and then headed back up the road.  After quite a few cars passed, a man going up the mountain to bike gave me a lift back to the trail.  The walking from there was pretty gentle and meandered  through some fields and on some rail to trails.  It was just after dark when I finally made it to the shelter.  No one was there and it was a large place.  I set up and as I was awaiting for my cheesy ramen to cool I noticed  a fair bit of firewood leftover.  It was going to rain the next day so I decided to have another go at my fire making skills.  I went looking around for some kindling and then using my toilet paper trick had another marvelous fire before me.  I stayed near it enjoying the warmth because the next day I had a feeling I’d be pretty cold. 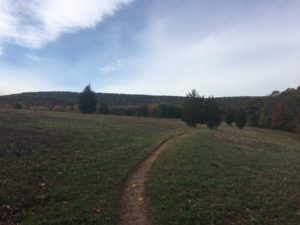 (The trail south of Lickdale, PA)

It was drizzling as I woke up the next morning as I tried to figure out what to wear to maximize warmth and dryness.  I settled on a thin layer of cloths layered  with my rain jacket and pants before heading into the increasing rain.  I had made a mocha but my whole body chilled quite quickly and I could barely feel my fingers in my 5 dollar Walmart gloves.  It was 18 miles to the next shelter (which would be a push for me) but setting up a tent in the rain wasn’t sounding too appetizing.  I tried walking long distances between my stops which worked out because I was too cold when I wasn’t moving.  I only stopped to grab a few snacks, eat lunch while shivering, and filter some water.  My last hour of hiking was done in the dark with a heavy pea soup fog.  I could barely see five feet in front of me and the fog reflected my headlamps light back at me.  Luckily the white blazes seemed to pop out at me and when I saw a light ahead of me I kew that I had arrived at the shelter.  It was a ginormous place with a covered picnic table and two floors.  A section hiker by the name of Redirect was the only other person there and we both had our own floor in which to sleep.   I spread out all my wet gear to dry and felt so happy to be under cover after an exhausting rain filled day.  I made two dinners to celebrate my fast approaching finish and thought how crazy it was that this would be my last night out in the woods before finishing the trail. 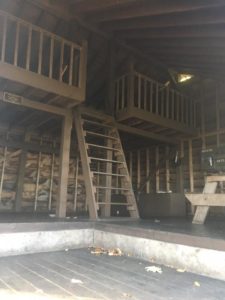 It was another chilly morning to wake up to but I was in no rush.  I had a relatively short day to Duncanon and was still a little tired from the day before.  The trail followed the ridge that ran near the Susquehanna river and I got a really nice view of it.  After a relaxing lunch I headed down the mountain to cross the Susquehanna on a major road way (it had a pedestrian path so no worries).  The trail followed roads during the last two miles through neighborhoods and finally the town of Duncanon where I spotted the Doyle almost instantaneously.  The Doyle Hotel is a funky old building that is a very popular destination for Thru Hikers due to the location and its affordability.  The two people who own it are really friendly and the husband who’s also the cook for the bar is fantastic.  I had one of the best spaghetti sauces I’ve ever had, and a whole lot of other food, and lots of beer.  When I was done enjoying the bar and the company of some interesting strangers I headed upstairs and immediately knew why the hotel had been referred to as a dump (among other things).  The whole upstairs smelled like smoke and almost everything in my room was clean but it didn’t look that way.  I don’t even want to describe the bathroom.  However, at the price of $25 for a hotel room to protect me from the cold it was well worth it. 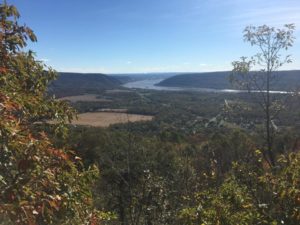 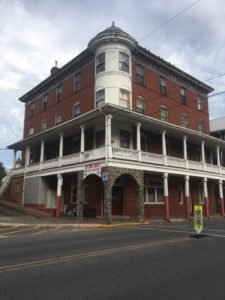 The next morning I packed up my gear and ate breakfast across the street.  After indulging in some scrapple, I made my way through to town before climbing up to another ridge.  I made good timing and met my parents in the early afternoon.  There, I said goodbye to walking with my pack for the last time and traded in for a slack pack.  My father and I got in a few more miles that evening before we went out to celebrate only ten miles left in my journey at the Boiling Springs Tavern.  We ate our fill and then returned to the hotel we were staying at for the night. 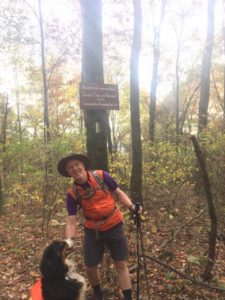 It was my last day on the Appalachain Trail and it felt weird.  I didn’t feel too hot in the morning but almost all of the trail was super flat and I had my dad!  We enjoyed lots of fields, a little forest, and many road crossings.  It went by really quickly although it felt like forever at the time.  With one mile to go we ran into my aunt Deb walking towards us who had come to celebrate, and when we got into Boiling Springs I was greeted by Barbra and my aunt Chris.  When I got to the Appalachain Trail Conservancy I immediately sat down on the swing there.  The person working there was excited because not a lot of people finish their hikes there and I commemorated my accomplishment by making a little sign and posing for pictures.  We celebrated with a little champagne and then people headed out.  I didn’t really feel real.  My parents, Chris, and I went out for dinner and I was quiet.  They kept telling me it was a huge accomplishment and I know it is (even though I sometimes feel guilt over how long it took me).  I know adjusting to normal life won’t be easy now that I don’t have such a simplified goal (aka walk south).  We shall see where life brings me next.  In a few weeks I may write again about the transition but for now I bid you adieu! 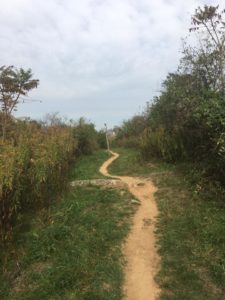 (The easy trail on the last day)