It started raining yesterday afternoon and rained all night. In fact it was still raining in the morning. Serendipity and I made coffee for everyone. I ate breakfast then took my mug upstairs so I could sip it while I sat in my cozy bed and journaled.

We packed and left the motel cabin at 11 am. At that point the rain was slackening and the radar showed that the storm was nearly past. Lee hiked the first several miles with us then said goodbye. According to Tracks, his son enjoyed the downtime and didn’t mind that it wasn’t spent backpacking. Shortly after Lee left, we encountered the 1900 mile marker. 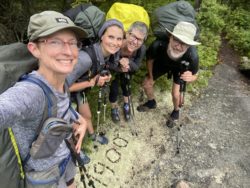 It was a wet afternoon. A couple times it rained lightly, yet the main issue was the narrow trail between rain soaked pine trees. Pine needles slapped my face, clothes, and pack cover. It was the first real test of my Frogg Toggs jacket. I was happy with its performance. My feet stayed dry until I stepped on a wooden walkway that looked solid but was actually floating. Released from the burden of keeping my feet dry, I splashed down the trail at a higher speed.

The five of us slept inside Gentian Pond Shelter  on the lower level. Two other thru-hikers slept in the loft, accessed by a step not a ladder. The shelter had a great view and was clean with lots of pegs to hang packs and clothes. It was nice to get out of the wet and eat a hot dinner. I treated myself to dark chocolate hot cocoa.

The trail was still wet in the morning. It was slow going as I took care crossing slick rocks and boards. After five miles of walking, I reached the Maine state line. Woohoo, final state of the trail and a new state for me! I hung out for a minute or two to share my excitement with Hobble-It. 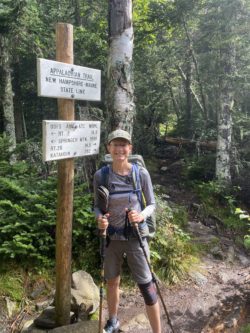 The Goose Eye Mountains were steep and sprinkled with rocks, boards, and rungs. At one point, I plunged my right foot ankle deep in a muddy bog. Hobble-It and I realized our pace was too slow to reach Speck Pond that night. Serendipity and Tracks agreed and texted Dinglebeary the change of plans. At Full Goose Shelter, the four of us prepared our packs for the Notch traverse. We moved externally stowed, easily damaged items to our pack interiors.

The Mahoosuc Notch is famed to be the hardest mile on the trail. It took Serendipity and I an hour and 45 minutes to traverse. The route involved scrambles over, around, and under massive boulders. I put my climbing skills to use and found my height helpful. My hiking poles got in the way so I shortened them and stowed them on my pack. For the second under boulder crawl, I pushed my pack ahead and then pulled it out once I exited. It was wearying, yet also fun. We were happy to make camp directly after and to discover Dinglebeary waiting for us. 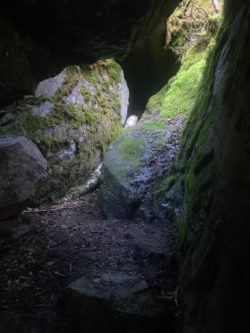 I got an amazing night’s sleep where I didn’t wake once and needed no earplugs. The Mahoosuc Arm lay ahead, but I was ready for an early morning climb. The trail ascended sloping rock slabs nestled amongst tree covered slopes and my shoes stuck well even to the wet sections. There was a nice view and cell service at the top.

At Speck Pond, remnants of a Beaver Dam took us across the outlet. Serendipity and I stopped for water. My filter has slowed after months of use so I passed the time soaking in my surroundings. I put on “Cloud Cuckoo Land” for the next climb. There were a lot of day and weekend hikers on the trail.

Near the end of the long gentle descent to Grafton Notch, I came upon a lovely waterfall. The deep pool at its base contained a flotilla of water bugs. They cast shadows that looked like paw prints. At the Notch, Dinglebeary caught up and the five of us ate lunch at a picnic table.

I find Maine beautiful in a wild and unconfined way. The afternoon climb up and over Baldpate East Peak filled my heart with awe. It was an exposed rock pile with a path noted only by cairns. I enjoyed hiking and scrambling over the rocks. Every pause offered amazing views of trees and distant lakes. Stunted pines and a large rainwater puddle adorned the top. 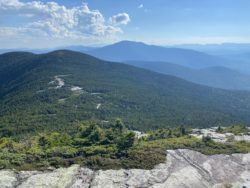 A couple miles later, we arrived at Frye Notch Lean-To, a typical shelter despite the new name. Serendipity, Tracks, and I pitched our tents in a small clearing south of the lean-to. It was quiet and a small stream gurgled nearby. Hobble-It and Dinglebeary joined us for dinner, which was entertaining. Dinglebeary singed his leg hairs when he lit his stove and flames shot out (the gasket was improperly seated). Serendipity got startled by a chipmunk that we prevented her from feeding.

I slept with my rain fly off and woke several times. Each time stars twinkled at me in the patch of sky over our camp. I must have been the first to use the privy because I ran into a lot of cobwebs. Even after months on trail, I still don’t like catching them with my face.

It was a weekend day so I hoped for trail magic, but didn’t voice it out loud. At our only road crossing, I spied an awning in the distance, yay! We sat and chatted with the couple, who had moved to Maine from Tennessee to escape the heat. They had a couple of my favorite trail magic treats, bananas and rice krispy treats.

After trail magic, we passed a couple hours gently climbing Wyman Mountain. I prefer climbs over descents, especially with steep terrain that is hard on the knees. There was a lot of old moose scat on the trail. The top of the mountain was coated in springy, vibrant moss. Serendipity, Tracks, Hobble-It, and I ate lunch in Hall Mountain Lean-To. We were happy to be making good time once again.

The last four miles of the day took us down into Sawyer Notch then up and down Moody Mountain. The first descent and following ascent looked very steep but weren’t bad, consisting mainly of natural rock stairs. Dinglebeary caught up to the rest of us on Moody Mountain. We made it to Black Brook Campsite just in time, claiming spots before the arrival of a large group of college students. There was a tiny toad in my campsite. While getting water, I ran into Kneelynd for the first time since Hot Springs. 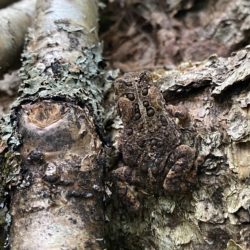