The Nantahala Mountains and the Story of Whitey Bulger (the dog)

We spent 6 days walking through the rest of North Carolina. It was a pretty interesting stretch and we passed some pretty famous places.

The views from the towers on Wesser Bald and on Wayah Bald were stunning. The weather was great – warm and sunny. Unfortunately the last two days were cloudy and rainy so there wasn’t much of a view on Albert Mountain. 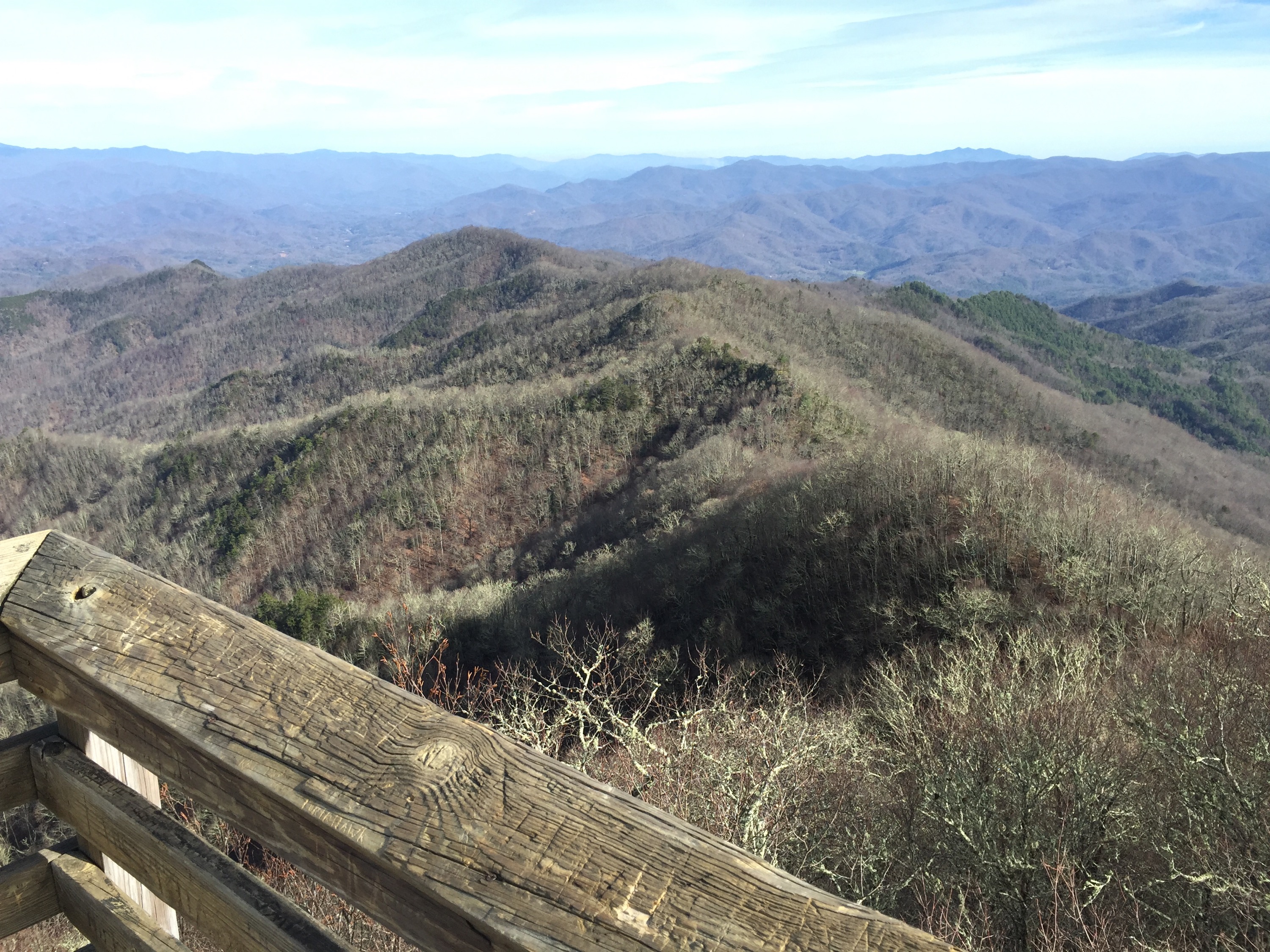 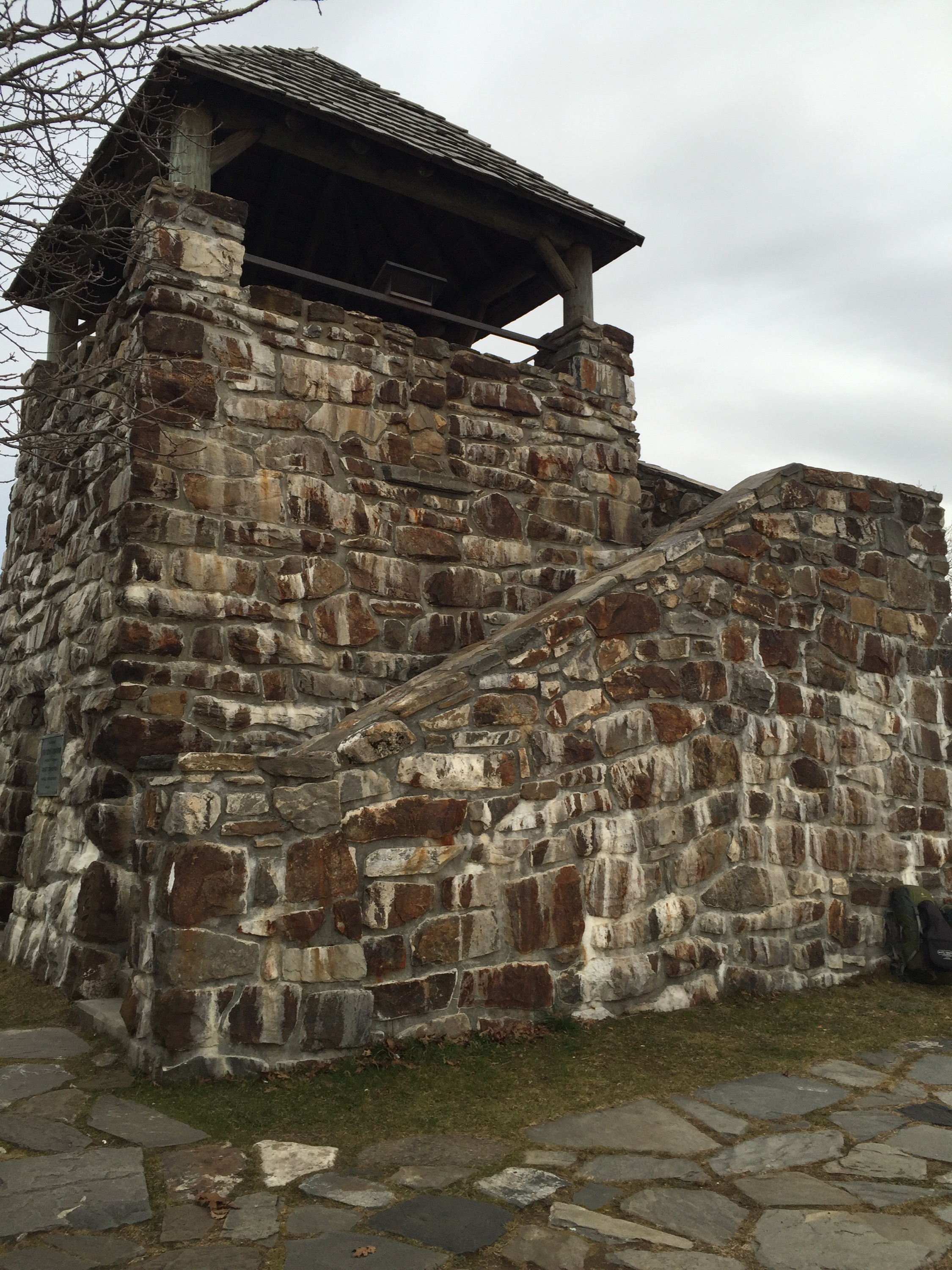 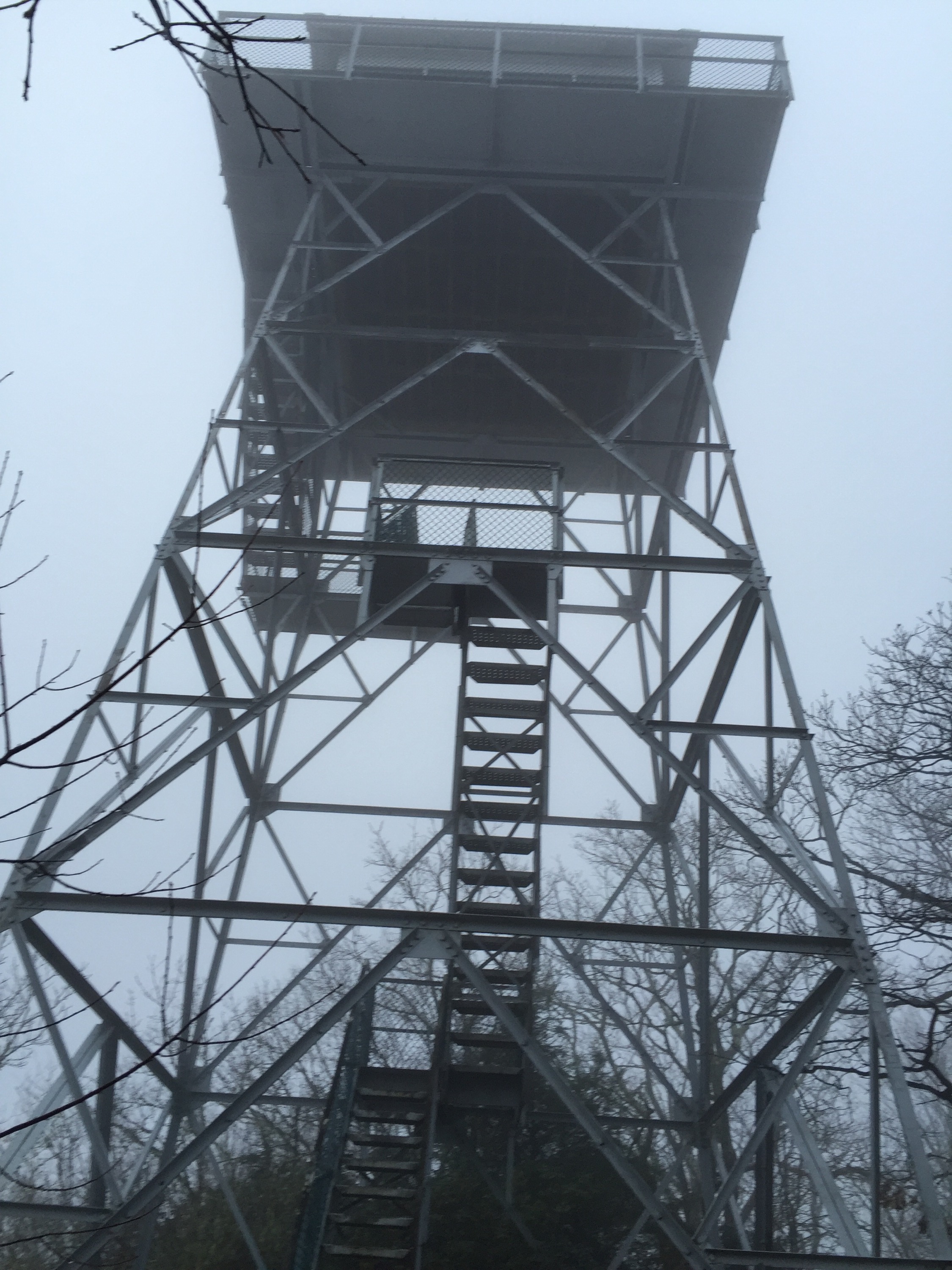 Hiding in the Clouds on Albert Mountain

Some of the most interesting stuff happened in  shelters and on the trail. I have been (to date) very lucky with mice issues. While Ian and others have complained about mice running across their sleeping bags, chewing on their packs etc., I have been either immune or oblivious.

That all ended at Long Branch Shelter. I got up early and was going to get water from the nearby stream. It was just starting to get light and I wasn’t using my headlamp. We use a gravity filter and I was un-hooking the dirty bag from a peg on the shelter. I noticed some leaves in the bag, suspected they were from the batch of stream water from last night, turned the bag upside down and shook them out. The “leaves” landed on my feet and the jumped up and ran under the shelter!

Needless to say, I jumped too. I have no idea why a mouse was in our water bag. And I don’t know which one of us was more startled. Later that morning I found more mice handiwork in that my shirt and a pair of boxers were chewed. The boxers are still wearable, but the shirt is totaled. 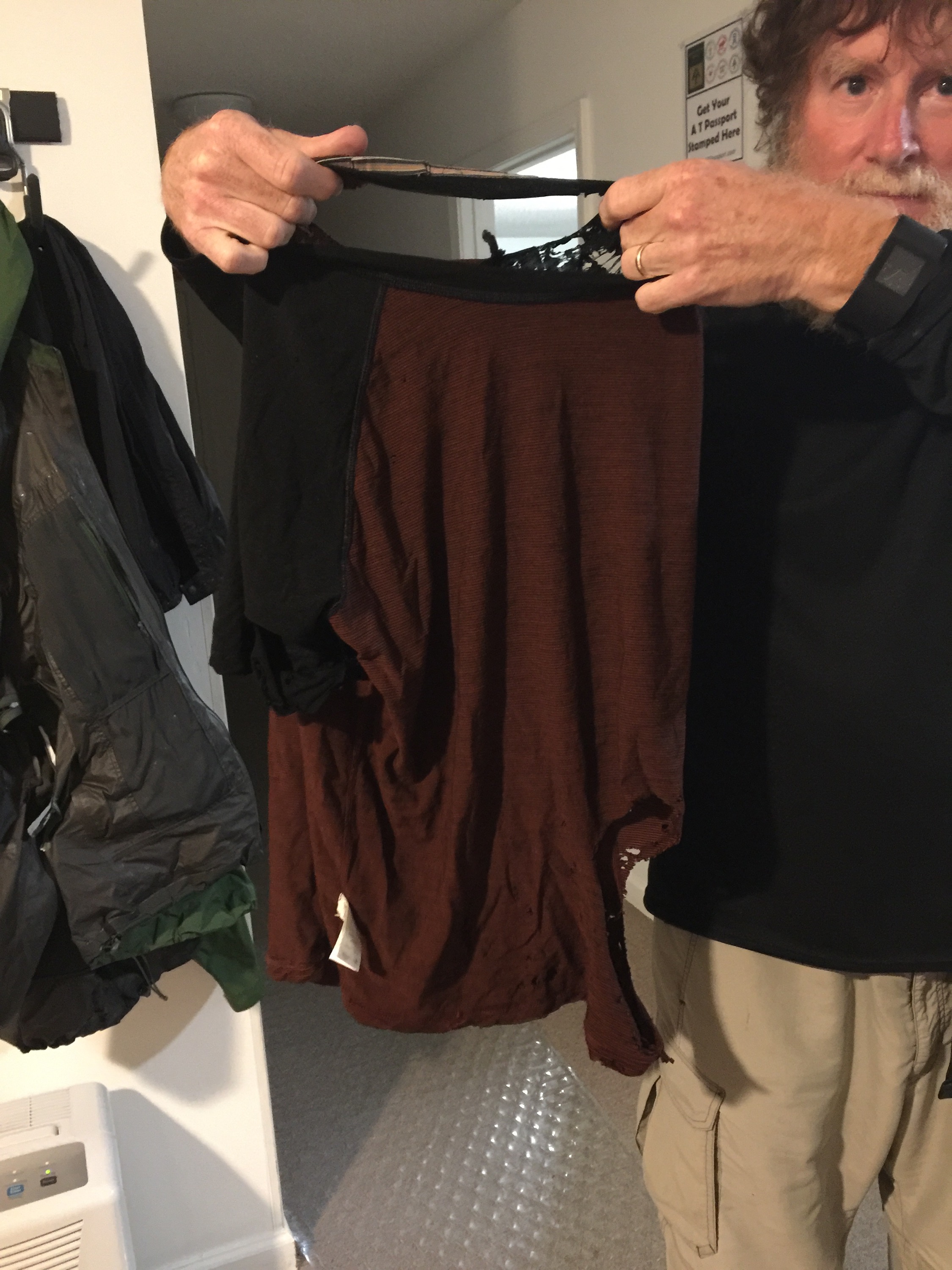 What’s Left of My Shirt

The second interesting story is that we picked up a “traveling companion” for two days.  He was a white dog, a little skinny, but with a collar so he belongs to somebody. The problem was he decided to adopt us. We called him Whitey (real creative) and the since the last two dogs we met were named after famous people (Jerry Garcia and Jimmy Carter), we extended his name to Whitey Bulger. 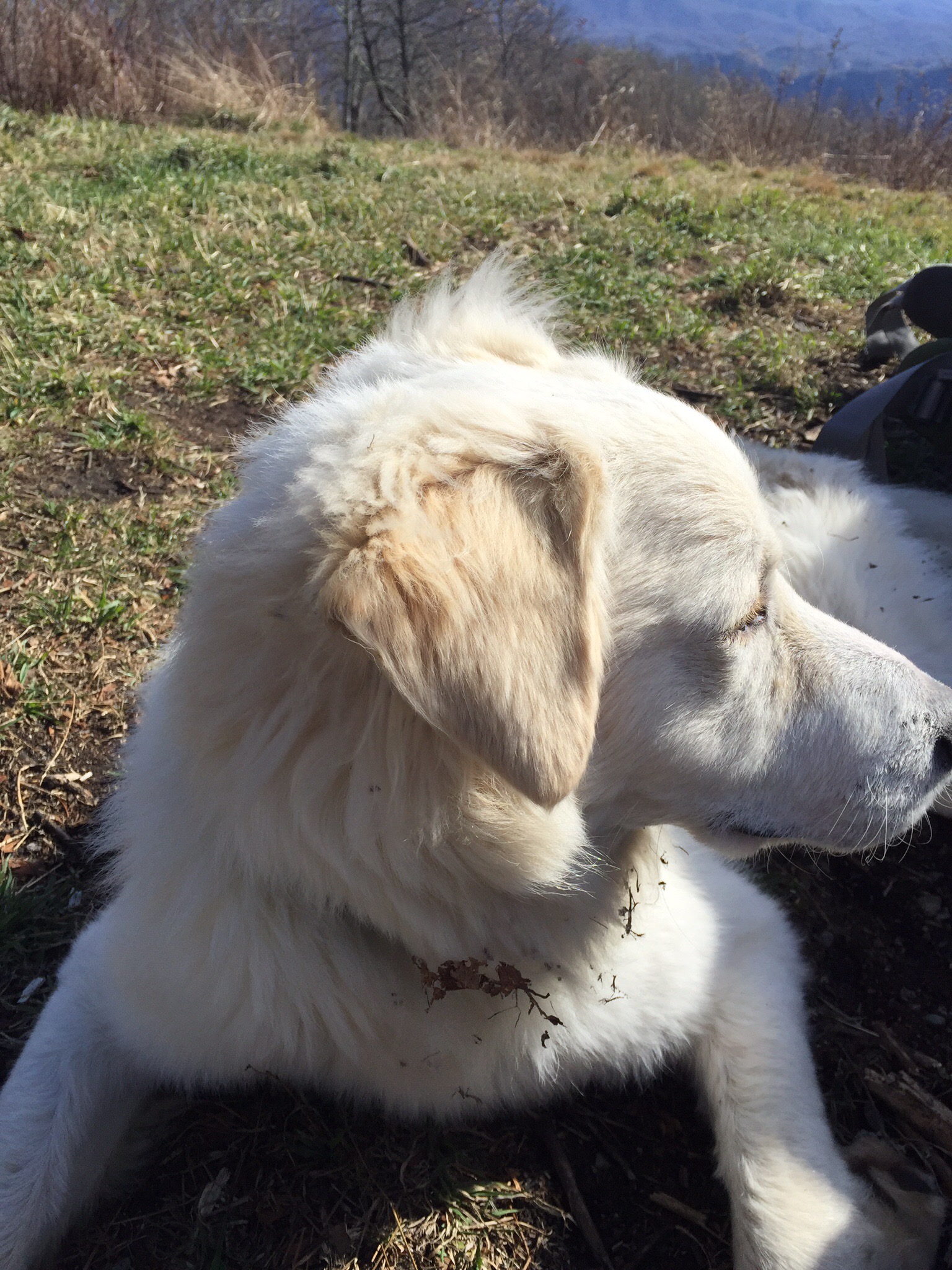 We really enjoyed his company. He was friendly, very happy to be walking with us, and made it clear he had decided we were his “people”. The only problem is we were not in a position to be responsible for a dog. We had minimal food, and were getting close to the end of our journey and a plane ride out of Atlanta. Whitey’s future with us was limited for sure.

At the end of our first day we reached the Nantahala River and the Nantahala Outdoor Center. This is a popular place with kayakers. There were a bunch there, but everything was closed (it was Thanksgiving Day). We had hoped to turn Whitey over to someone, but it didn’t look that way. Then we lucked out and he latched on to a family who clearly had more food than we did. So we moved on alone up to the Rufus Morgan Shelter, about another mile up hill.

Whitey had followed another hiker out of Nantahala. This hiker had a dog named Daisy, and Daisy and Whitey seemed to get along – albeit loudly.  Then Whitey wandered up to the shelter from this guy’s campsite and latched back onto us.

After packing up, we hiked down to this guy’s site and then Whitey and Daisy started playing again. The hikers said he would take Whitey back to the NOC and see what could be done. With that we left.

Not 200 yards up the trail, Whitey was back with us. We walked back to the campsite and tied Whitey to a tree. We said goodbye to the other hiker and set out again. Maybe a quarter mile later, Whitey was behind us dragging the rope.

Ian said he would run Whitey back and I could sit with our packs and wait. He started back. After about fifty yards, Whitey looked back at me, figured out what was happening,  and then just lay down on the trail. He didn’t fight Ian. He just went totally limp. The dog is ready for any college protest.  He’s got “passive resistance” nailed.  So we gave up and Whitey happily traveled along with us for the second day.

Then at about 10:30, another hiker with a dog passed us – a girl dog. Whitey was smitten. Not only that, the girl dog had her own backpack with dog food. The other hiker promised to take care of Whitey and again see what could be done at the NOC.

So once again we set out unencumbered by dog. This time it was for good. We are happy to not have on going responsibility for Whitey’s welfare, but in a strange way we also miss him.

That’s it. We crossed into Georgia yesterday and resupplied in Hiawassee. We stayed at the Top of Georgia Hostel last night. It was wonderful, but this morning we are on our last push. Friday we reach Springer Mountain, where Linda is meeting us. 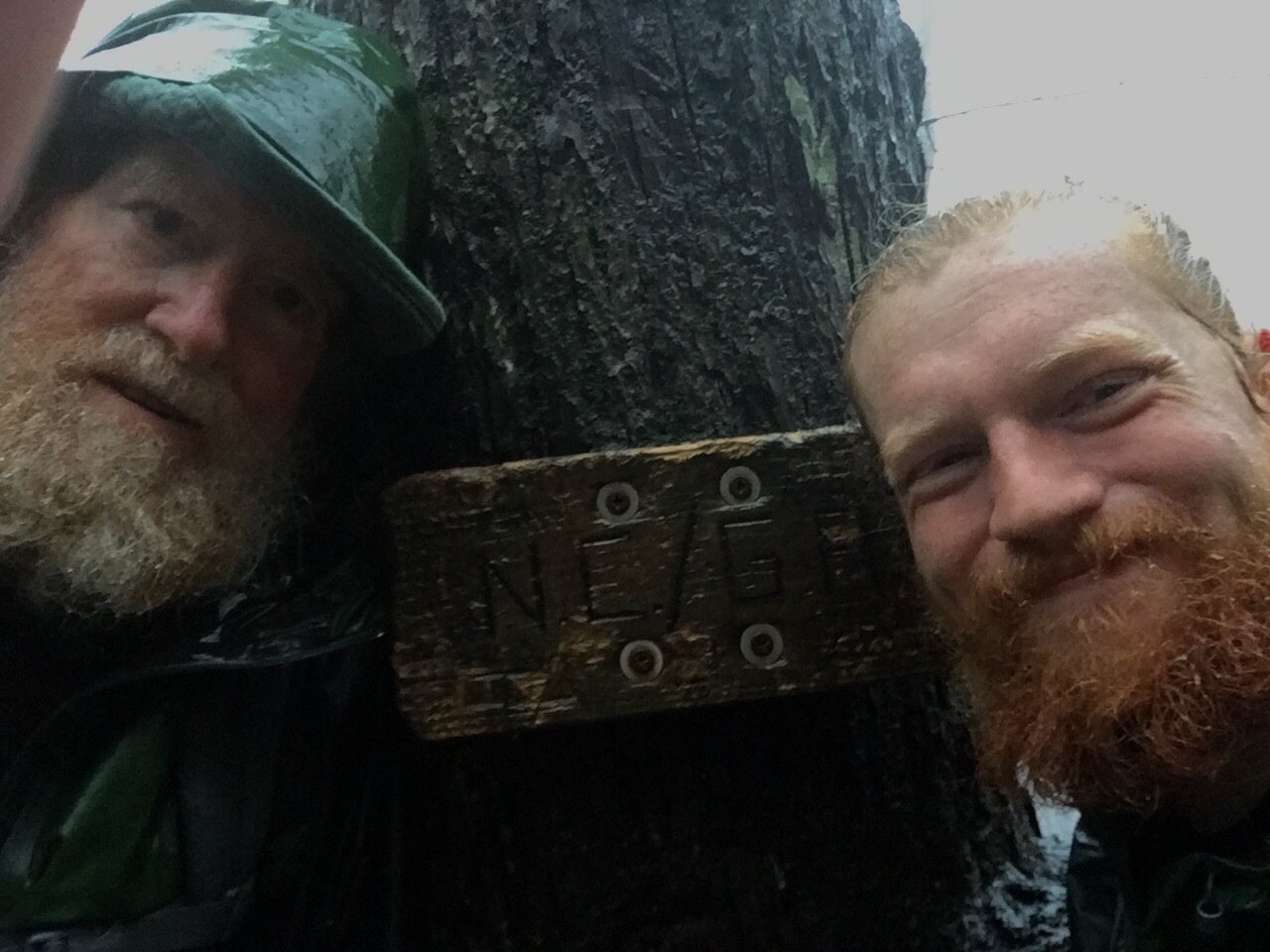 At the NC/GA State Line