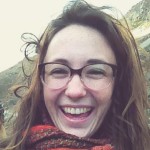 The Quarter-Trail Update (Part 3: The Highlands)

Since I’ve been so terrible about updating this blog, here’s one massive update (in multiple parts) to let you know what I’ve been up to for the past 550 miles.

When we first got to Uncle Johnny’s in Erwin, they were completely booked up. Uncle Johnny suggested we tent, insisting that it wasn’t going to rain (not true). We decided to take the dinner shuttle into town and split the cost of a hotel room after dinner. The restaurant we went to was BYOB, so we bought some delicious IPAs at the liquor store next door, making sure to get enough to treat ourselves to one later in the evening. Luckily, when the shuttle came back to pick us up, Uncle Johnny’s had received a cancellation for one of their cabins. We took it.

The next morning dawned sunny and we took the breakfast shuttle into town to resupply. The only problem was hat the breakfast shuttle pickup was so soon after the drop off, that I didn’t think I could make it back in time after running the errands I needed to run. This actually worked out in our favor. We ended up wandering around downtown Erwin while running errands, and had a delicious breakfast at the breakfast counter in the old local pharmacy, Clinchfield’s (they also sold milkshakes. I still regret not getting one). We decided to wander after that until the lunch shuttle arrived, but as we were walking past a gas station, a pickup pulled over and asked us isle we needed a ride. The man driving it had one of the most beautiful dogs sitting next to him, and she clearly wanted to say hello to us. We hopped in the back, and he gave us a ride back to Johnny’s, where we packed up and continued our hike.

The weather a couple days after Erwin turned cold, and it snowed for the second time. The forecast looked dire, and were worried about crossing the exposed balds of Roan Highlands in single digit temperatures. We stopped into the Greasy Creek Friendly for food, and were pleasantly surprised to learn that the weather was going to stay comfortably in the 30s and 40s. After dinner and conversations with friends and new friends, I hiked on to the next shelter a few miles away. 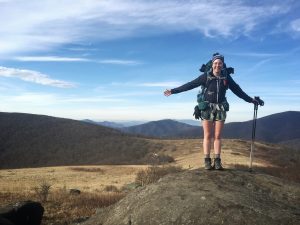 The next couple days were some of the most beautiful I’ve experienced on the trail. We first hiked over Roan Mountain, and then were treated to a beautiful hike over Jane Bald. After we re-entered the woods, there was still some snow on the ground, and the footing was muddy and treacherous. I almost fell in a giant mud puddle, but managed to save myself inches from the ground. That night we stayed at Overmountain Shelter, an old converted barn with a great view. We also crossed paths with The Real Hiking Viking, a winter southbounder who became something of a trail celebrity this year. He’s probably already finished his hike by now. 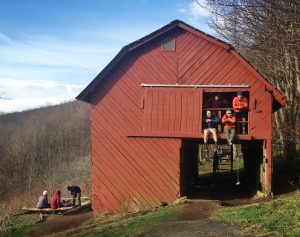 The day after Overmountain, we crossed a couple other equally beautiful bald mountains, and aimed for Mountaineer Shelter. When we got there, the shelter was packed, so we continued on to a campsite a few miles away. It rained during the night, and the next morning was the first time I had to pack up my tent in the rain. It was soaked and easily added another couple pounds of water to my pack. That day stayed misty and wet for most of the day, and it ended up being one of the harder days I had on the trail. There was no particular reason, the terrain was easy, and we weren’t going that far. Perhaps the weather contributed. The clouds parted just as we made it to Kincora Hostel.

I have nothing but good things to say about Kincora. It’s definitely not luxury, it’s a hiker hostel, but Bob Peoples was accommodating, friendly, and full of great stories. He shuttled all of us (about 10-15 hikers) to town, where we resupplied and chipped in on ingredients for a ridiculous amount of delicious lasagna, baked by a hiker name Flicker. I stayed in a treehouse that night, and enjoyed a lazy evening and morning surrounded by people that I’ve come to know and appreciate.

Even though we hiked almost 18 miles the next day, it was a lazy and beautiful day, and because of our lazy pace, we got to the shelter just as dark was falling. That was the first time I had to cook and set up my sleeping bag in the dark.

The next day was another perfect day of weather with relatively easy terrain, and we easily surpassed our goal. We stopped at the campsite we had intended to camp at and immediately decided to try for a marathon day (hike 26.2 miles in a day). We made it and stopped about 6 miles short of Damascus.

Unfortunately that night, I came down with some sort of awful virus. I woke up with intense nausea and spent half the night getting sick. I still don’t know what it was, but I suspect a combination of food poisoning and dehydration if it wasn’t a virus. I woke up feeling much better, but 2 miles later, it was clear that that feeling was short lived, and exhaustion and body aches set in. The next 4 miles to Damascus were torture, but I am infinitely grateful that we were that close to town.

I spent that night at Woodchuck Hostel, which has been one of my favorite hostels on the trail thus far. My bed was ridiculously comfortable, and I was able to recover in the company of fellow hikers and friends.

Damascus provided the opportunity to bask in the sun and eat good food (once my appetite returned). The first day hiking out of Damascus felt amazing after I had been feeling so awful. The weather and terrain were good, and I was pleasantly surprised that I felt as good as I did.

The next day, we hiked longer than expected, and made it all the way to Thomas Knob, just outside of the Grayson Highlands. There we were greeted by an amazing sunset, fellow hiker friends, and wild ponies (Grayson is the only place on the train with wild ponies).

It’s interesting how memories of place change over the years. 5 years ago, 6 friends and I spent a long weekend hiking in Grayson Highlands. It’s one of the trips that really cemented my desire to hike the Appalachian Trail. I thought I would recognize much more of the terrain than I did, though it all seemed somewhat familiar in a hazy way. 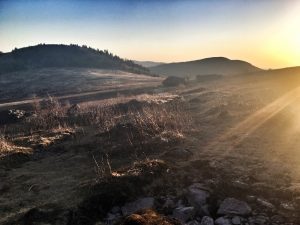 Regardless, Grayson Highlands has been one of my favorite parts of the tail so far. The terrain is unique among all that I’ve experienced so far, and is incredible. Massive gray rocks and cliffs rose out of seas of golden grass and short trees, interspersed with taller forests and clear balds. Ponies dotted the landscape, and just as I was leaving the Highlands, I saw a adorably cute foal. 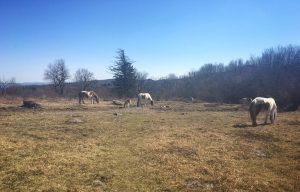 The joys of Partnership

This post seems to be stories of accidentally or intentionally hiking more miles than we meant to, but our hike to Partnership Shelter was the worst of these. We originally set out to hike 13 miles from Old Orchard to Trimpi, a recovery day from recent long days. It ended up turning into a 23 mile day because of a few factors, including an error in our guidebook. At least we were rewarded for our long day with the ability to order pizza directly to the shelter. It was a nice night, so we cowboy camped with full stomachs under the stars.

The next day we resupplied in Marion, Virginia, and hiked out 7 miles to the next shelter. We planned to do a long day the next day, do I went to sleep early with the idea that I would wake up early to tackle big miles.

Of Comfort and Kangaroos

I woke up early the next morning, and found that my hiking companions had fallen sick during the night. I was sympathetic, having been through something similar just a week earlier. I walked with them the 4.5 miles to Atkins, VA, and after a confusing stop at the motel next to the trail, we hitched a ride to the Comfort Inn.

While they got better over the next two days, I slowly went stir crazy. Atkins is not a large town, and I had to amuse myself by watching the same Seinfeld episode on TV, and waking next door to the combination Kangaroo and Subway, just for some thing to do.

I was glad to hike out 2.5 days later and officially cross the 1/4 trail marker. I’m a couple hundred miles farther by now, but those are stories for another post! 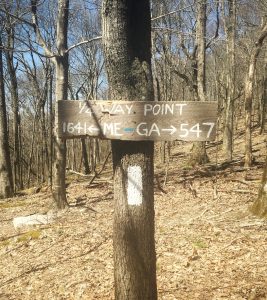 Have any good stories from the first 550 miles of the trail? Let me know in the comments.

Hi! I'm Zoë. By trade, I'm a User Experience Designer living in La Grande, Oregon. By passion, I'm a full-time adventurer who enjoys hiking, skiing, globetrotting, reading, and baking. In 2016 I completed a NOBO thru-hike of the Appalachian Trail, and have been trying my best to get back to trails as much as possible ever since. Why the AT? Growing up in North Carolina instilled in me a love for the Appalachians that I haven't been able to shake (not that I'd want to), so it seemed like a perfect first thru-hike. My current backyard is the Eagle Cap Wilderness in the Wallowa-Whitman National Forest, and I've loved exploring all that it has to offer.