The Whites and Their Rocks Nearly Killed Me

After 1,800 miles I finally made it to the infamous White Mountains.They proved to be the highlight of my hike. Check out the video:

After a hellacious descent down Mount Moosilauke in the pouring rain, I finally entered the White Mountains. I had been waiting for the Whites the entire hike. Previous hikers told me that the Whites were their favorite part of the AT so I was excited and had high expectations. The rain continued to pour as I hiked toward the Eliza Spring Shelter. Puddles were everywhere and my feet were swimming in water. I had to take extra care not to slip on the slick rocks. My clothes probably needed a wash so at least the rain was good for something.

Of course, the shelter was full and all the designated tent sites were taken. Luckily my REI Quarter Dome 1 had a small enough footprint that I found room for myself. I did my best to hang my wet clothes. The hike up and down Moosilauke had me so beat that I didn’t even bother to put my food bag in the bear box fifteen 15 away. My knees were killing me from the descent so I took some Aleve. Some new blisters had developed on my feet due to my wet shoes. The life of a hiker…

The morning was overcast but no rain. I set off on the trail in a lush, green world. The Whites were proving to be a formidable challenge, with steep rock faces to climb up and down. My first big ascent was Kinsman Mountain. I thought I was in shape with my trail legs back in the South but the flatter, easier states of West Virginia through New York had left me feeling out of my element. I wasn’t used to climbing 4,000-footers! Unfortunately, the views were unrewarding, hidden in the clouds. But to brighten my day, the huts in the White Mountains leave out leftovers from breakfast and I was able to snag some cold pancakes at one of them. Hiker trash for life.

I continued on over Little Haystack Mountain. My legs and knees were dying. Soon I was tramping through the clouds along Franconia Ridge. I had heard amazing things about the views up here but the cloud cover ruined any views. I thought about stealth camping with hopes of catching better weather in the morning but was too low on water to make camp. And so I continued over Mount Lincoln and Mount Lafayette. On my descent the clouds blew away and I was treated with a heavenly view of the Whites. I could even make out Mount Washington in the distance. These were the moments that made it all worth it. 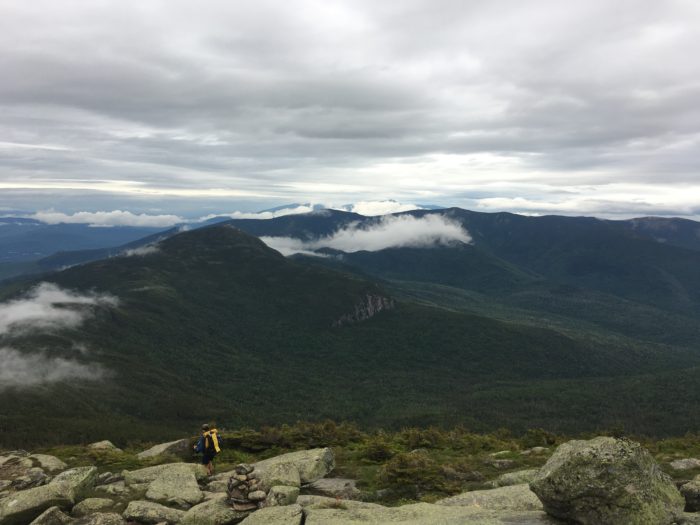 When the Whites Get You Down

I awoke to a cold, misty morning. It reminded me of my days in the Smokies where I needed my rain jacket to keep warm. My blisters were not healing from the wet trail conditions. The steep climb up Mount Garfield proved an efficient way to warm up. Clouds ruined the view and it hailed for a minute on the way down. Breakfast leftovers at the next hut lifted my spirits once again.

Twin Mountain finally provided a view as the clouds burned off. The Whites were spectacular but the wind didn’t allow me to enjoy the view for very long. The descent was steep, much like everything in the Whites. I had been taking my time and being as careful as ever but the terrain was just that difficult at times. At one point I slipped on a rock face and fell on my ass. There was a loud snap. 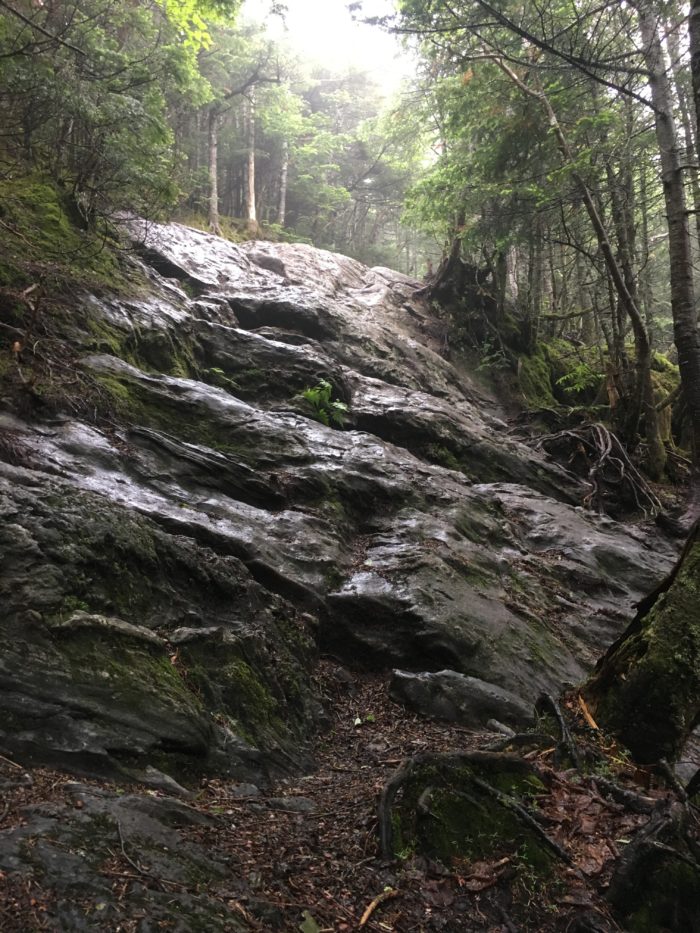 I saw two streaks of red across my left wrist and my right palm hurt. I popped up off the ground rather quickly. My palm would be fine and the cuts across my wrist luckily were shallow and not near any important arteries. My left trekking pole, however, was cracked in half. It was utterly useless now. At least I wasn’t badly hurt and it was just a pole. What if the pole had cut the artery less than an inch farther? I should consider myself lucky. But if there were ever a time I needed my poles most for balance and support, it was here in the Whites. I didn’t have cell service anymore so I couldn’t even get the ball rolling on having a replacement mailed out to me.

One pole in hand and the other strapped to my pack, I continued on. The sun shone down and it was a gorgeous day. There was a swampy fork in the trail with a view off to one direction. I took a look and it was incredible. The mountains were gorgeous.

With the rainy and cloudy weather behind me, the next day was full of sunshine with one gorgeous view after another. First it was Mount Webster, followed by Jackson and Pierce. My knees were thankful the trail went around Eisenhower rather than over. Some trail maintenance forced me over Monroe rather than around.

At Lake of the Clouds Hut I had the choice of staying the night and doing a work-for-stay or summiting Mount Washington and continuing six more miles before sundown to Madison Hut. I wanted to summit Washington on a day with clear skies so I seized the moment and pushed on.

It was an easy climb for once. I stopped at the summit and did some touristy things and bought myself some whoopie pies. The day wasn’t getting any longer and I had miles to conquer and I set off once more.

The rocky trail slowed me down considerably and did a number on my knees and feet. I did my best with one trekking pole. At one point I came across some snow that had yet to melt; it was June! From Washington I hiked along the most beautiful section of trail on the entire AT past Mount Clay and Jefferson. I hobbled to the Madison Hut just after sunset and found a place to pitch my tent. I was exhausted after an 18-mile day through the Presidential Range.

Mount Madison was the worst. It was a moonscape of jagged rocks. The trail was a choose-your-own-adventure as I picked my way down the rocky slopes from one rock cairn to the next. My feet were bruised and sore by the end of it. But it wasn’t the end. After a brief reprieve at Pinkham Notch for lunch and ice cream I set off over the grueling peaks of Wildcat Mountain. 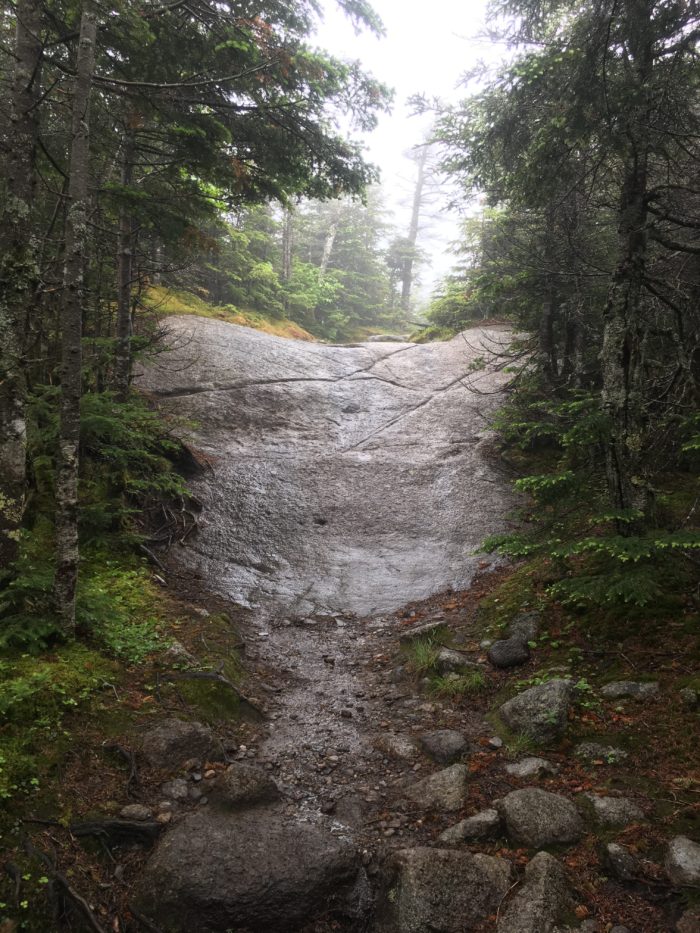 By 6:30 p.m. I was at Carter Notch Hut. There was no room for anymore work-for-stays so I had to find a place to camp. I was exhausted and rain was coming. Not wanting to have to hike Carter Mountain in the morning rains, I stubbornly pushed on knowing full well there wasn’t enough daylight for me to make it to the next campsite. Just my luck it was a full moon.

By the time I summited Carter Mountain darkness fell. And the rain clouds came with it, obscuring my full moon. It was extremely creepy and dangerous to hike down in the dark. My headlamp battery died but I was able to use my phone’s flashlight. I tied my bandana tightly around my forehead and stuck my phone in… life hack. By 11 p.m. I arrived at Imp Shelter and campground as it began to rain. I was drained, bruised, and my body felt miserable. My foot pain was bad and the arches were bruised. My knees were throbbing with soreness. I took an Aleve as I tried to sleep but woke up at 4 a.m. with my knees so sore I had to take another Aleve just to fall asleep again. I had been trudging along to beat the rain and I had made it, but at what cost? With three weeks left of my hike and the best part of the Whites behind me I was ready to be done.