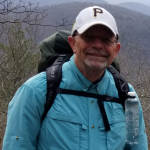 The Will to Survive 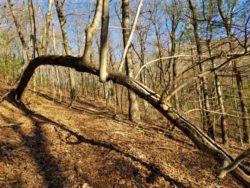 The will to survive is very strong in all living things, including me. AT hikers are reminded of the will and struggle to survive seeing the numerous blow-down trees that while leaning over precariously, have retained enough ground contact with their roots to allow new stems to fight back and grow vertically, continuing to bring life to their mother tree.

While the AT is well marked for the most part, it is very possible to make a simple mistake that could have dire consequences.  Monday was my day to get back onto the trail after taking a double-NERO in Franklin; short hike to Winding Stair Gap to a two-night stay in Franklin with a slack-pack from Wayah Gap back to Winding Stair on day two.

Monday began slowly as the usual machinations of needing a ride back got me to the AT at about 10:00AM. The plan for the day was to hike from Wayah Gap to Cold Spring Shelter, a bit over 10 miles. The four-mile climb from the gap to the summit of Wayah Bald was a serene, but steady pull and the forecast of heavy rain in the late afternoon provided the motivation to keep it going forward. I was totally alone.

The summit was in the clouds and windy, eliminating any views and providing an ominous feeling to the day, but I felt good; should make it to Cold Spring by 3:30. The rain was due about 3:00 and with a little luck, I’d get to camp dry. That is, unless you take a wrong turn.

You see, the descent from Wayah arrives at a “T” in the trail. A small sign indicated that the AT Shelter was to the left, so I went right. The trail in that direction follows the Bartram Trail and I went that way for about a mile and a half, down a very steep descent and through a wind tunnel of a gap. My descent arrived at a fork in the trail and at that point, I knew that there should be a clearly marked white blaze indicating the correct direction. But there was none to be found.

Looking at my Far Out app, hoping to see how “close” I was too Cold Spring Shelter, a cold chill ran through me with the realization that I was at least a mile due east of the AT and nowhere near the shelter. And this was a mile as the crow flies, not as the trail’s curves and switchbacks had led me.

The wind was increasing in intensity. I was near the bottom, both physically and mentally; big rain was coming, getting colder and there was a long climb back up to the AT. For a moment, I considered going cross country due west. But that solution was quickly eliminated. Getting completely lost with the impending weather could be deadly.

It took a couple of minutes to gather myself and steady my thinking; the thing to do was to simply go back the way I came. I said a prayer, turned back and began my ascent back to the AT. Psalm 31 says, “My life is in Your hands,” and I sensed the Lord’s presence as I climbed back out. Head down, stay patient, stay steady, keep moving. A calm resolve came over me.

I got back to the AT just over five miles from Cold Spring and just then, the rain started in earnest. It poured hard for about an hour and a half. The wind howled through the trees like a sound effect in a Boris Karloff movie. The trail become a long, narrow puddle and I got soaked to the bone. My biggest concern, though, was hypothermia, so I set myself a good pace.

The trail cooperated as most of it was rockless with gentle inclines and declines. My concern was what could happen if I stopped. Keep moving. A quick calculation told me I would make camp about 5:30. The rain stopped at about 5:00 and I realized that climbing generated enough heat to ward off the hypothermia. As I climbed the last 750 feet of vertical the daylight was being chased by the thick clouds, but it started to feel as though things would work out.

Then, a few yards up the slope to my right, came a loud snort. Bear.  Even as cold as I was, I could not help but smile. “Dear Lord, do we have to deal with this right now?” From numerous encounters with bears in Pennsylvania, I knew that a snorting bear is most likely moving away. This one did, as I heard movement and a second snort from farther up the slope. The last half mile of my hike to camp was spent talking to the bear in my clear voice, explaining that it would be bad for both of us if he came too close.

Thankfully, up the trail, the roof of the shelter came into view and hike ended uneventfully. But instead of finding a shelter full a rain dodgers, my shelter mates were two women who are cancer survivors; they knew firsthand about the will to survive and having them there put my little trauma correctly into its place of lessons learned.

Hey everybody, my name is Eddy Grunenwald, trail name Halupki....that's Slovak for stuffed cabbage. Mostly retired, I am making my second attempt to thru-hike the AT in 2022. Follow along and we'll tell some stories and live the adventure.