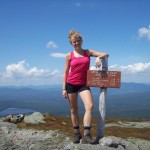 When I started my NOBO thru-hike of the Appalachian Trail on April 1, 2011, romance was not at the top of my list. It was not at the top of my goals list, nor was it at the top of my worry list. I had left my life in southern Vermont–which included a benignly mutual break up that was hastened by my impending departure for north Georgia. In fact, I felt empowered and invigorated about the idea of being a strong, single woman on the trail. Thru-hiking the AT had been both beckoning me and kindly taunting me for several years prior. As a barista at a suburban Philadelphia Starbucks, I had started a simple shoe box that stashed all my tip money labeled: AT Fund. That was stash was started about 3 years before I actually set foot on Springer Mountain.

My first few days on trail were unlike anything I would have anticipated. As I set up my tent at Hawk Mountain Shelter surrounded by 40+ other multi-colored neon tents, I was struck by the idea that this was going to be a much more social endeavor than I had ever expected. In the days to come, I was befriended by a 70 year-old ex-Army vet from Texas who had taken it upon himself to be my companion, sounding board and guardian from a distance. There were quite a few snags that could have been a lot messier had he not been there to straighten out my thinking and encourage me to take a break and plan out my next resupply. My new buddy, SilverHiker has left a lasting memory and impression on me during that pivotal time of my thru-hike.

As the miles rolled along, I had began to enjoy and appreciate the companionship that others had bestowed on me. It seemed as though I was being more drawn to men on the trail than I was women. This was no surprise to me. Ever since college and the huge emotional scar that was left on me from a group of dramatic college freshman girls–I had built a stronger sense of trust from men. I had fostered male relationships over female ones by placing more energy and effort in the idea that they would be long-lasting and trusting. So when I met Plan B in Damascus, I knew there was going to be more to this hike than just walking, eating, drinking and sleeping.

It was in a southern Virginia convenience store that I first met Plan B. Like most town stops, I was doing my laundry and all the other humdrum activities that seem to fill your “zero days” before you know it! I had stopped in that store to buy a Vitamin Water in order to get some small change to wash my sweaty, salt-laden clothes. As I clicked my way through the small ATM machine, I overheard a group of hikers talking about slackpacking. This had been a concept that was unknown to before my thru-hike. Once on the trail, I had vowed to never slackpack and to always hike in the same direction: always north. Up until that point, the folks I had been hiking around had participated in this slackpacking lifestyle a couple (or many) times. I felt an instant connection to this person who was speaking so passionately and openly about his feelings on the matter of slackpacking. After a minute or so, he noticed me standing there and caught my eye as I waited for my cash to dispense. He came over and mentioned something more about his anti-slackpacking beliefs. I acknowledged his sentiments and left the store with a feeling of solidarity and comraderie. I would not see Plan B for another 10 days when our paths would cross again–not on the AT but at Trail Days.

I had always thought about going to Trail Days in Damascus. My only hang up was the idea of hitch-hiking from Pearisburg to Damascus and banking on having the same luck with a complete stranger in order to get back to my point on the trail. I decided to take matters into my own hands (which I often did during the beginning parts of my thru-hike) and rent a car. I drove southwest, paralleling the trail almost the entire way. I was driving the opposite way I had just traversed by foot. It was a strange feeling to say the least. Once I got to Damascus, I was greeted by a quirky, chaotic undulating sea of hikers, hippies, gearheads and various characters in between. I had planned to stay with my trail buddy, Docboom (another guy I had befriended in the Smokies). Before too long I caught a glimpse of a familiar face. In a place I had only been to once in my life, I had not planned to bump into tons of people I knew. Throughout my hike I had met tons of people–most of whom I met one day and never saw again. But this face brought about feelings of connection, excitement and intrigue.

Plan B had made his way to Trail Days with one of his hiking buddies, Navigator. He had been traveling as a group of four, but two of his posse chose to stay on trail and bypass Trail Days. I immediately walked over to Plan B and gave a familiar and cautious smile. It didn’t take too long before we both realized the recollection. We picked up almost exactly where we left off–talking about trail life and the various levels of slackpacking, etc. For the rest of the day, Plan B and I hung out. We ate funnel cake, danced to some killer bluegrass bands, and navigated through the dark and twisted world of “tent city” and the camps of “Billville” and “Riff Raff” to name a few. The bonfire flames lit up the dark sky as sparks flicked about to the thumping sounds of hand drums and tambourines. It was unlike anything I had attended before, and most certainly a side of the AT community that I did not know about before my hike.

As we parted ways for the night, Plan B, Navigator and I decided to meet up the next day for breakfast. We had talked about carpooling back to our respective trailheads the next day, which both excited me and produced a pit feeling in my gut. The reality was, Plan B and I were 50 miles apart by trail. He had gotten off near Atkins, Virginia, while I was 50 miles north in Pearisburg. The chances of us bumping into each other again were slim to none. After breakfast we all piled in the silver compact car I had rented. We leisurely drove down some country roads past grassy hill farms and cattle moping this way and that. The windows were down and life was good. When we got to the parking area for the AT trailhead near Atkins, I knew this was goodbye–for now. I had gotten Plan B’s phone number and it was common knowledge that we hoped to stay in touch and possibly see each other again someday down the trail. As the hoisted their packs, I noticed a large, ominous storm cloud rolling in. The winds picked up as a drove off. I knew that Plan B and Navigator were in for a wet walk that afternoon.

Back in Pearisburg, I reconnected with the trail family I had left two days before. Most of them had hiked on, but Alien and LOTAT were still hanging around–debating the fate of their thru-hikes. We rallied and decided to catch a movie on the big screen–a real treat after spending 1 1/2 months in the woods. All the while, I noticed my mind constantly revisiting the weekend I had spent with Plan B. I could not seem to wipe the grin off my face or the butterfly feeling in my stomach when I thought seeing him again. It was clear to me that this was more than just a trail crush–this was a real, genuine trailmance.

Hello World! My name is Meg, also known as Freight Train. I am a former Appalachian Trail thruhiker (NOBO 2011). I have also thruhiked the Long Trail of Vermont, as well as the Everest Base Camp trek. I am a hiking, backpacking and camping enthusiast and seek out the peace and inspiration of the wild places as much as possible. I am also an avid runner. I enjoy blending those two loves in the form of trail running in my home state of Vermont. I have spent several summers leading trail crews throughout Vermont--building rock staircases, waterbars, drainage and various other projects. I currently work in an alternative school for boys in southern Vermont. My partner and I enjoy taking our dog, Mabel, on many of the local trails. Our goal is to get her accustomed to camping and backpacking and turning her into a real trail dog. Her trail name is Muddy Waters--I think you might be able to understand why! My other hobbies include vegan baking and cooking, spending time with my nieces, writing, reading, dancing, teaching and practicing yoga. I am a huge fan of Will Farrell, Kristen Wiig and Melissa McCartney. My favorite color is yellow and my favorite food is sweet potatoes.