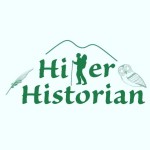 “Most people never in all their lives sleep under the open sky, and never realize what they are missing.” – Earl Shaffer

I started my flip-flop hike of the Appalachian Trail on April 15. As preparation for my hike, in addition to the usual obsessing about gear and doing several shakedown hikes, I read books. A lot of books. These included books on how to prepare to hike the Appalachian Trail (Appalachian Trials, and Long Trails: Mastering the Art of the Thru-Hike), first-person accounts of hiking the Appalachian Trail (AWOL on the Appalachian Trail), and some hiking-related works of literature (Henry David Thoreau’s Walking). But by far my most enjoyable preparatory read was a revisitation of Earl Shaffer’s classic account of his 1948 thru-hike, Walking With Spring. 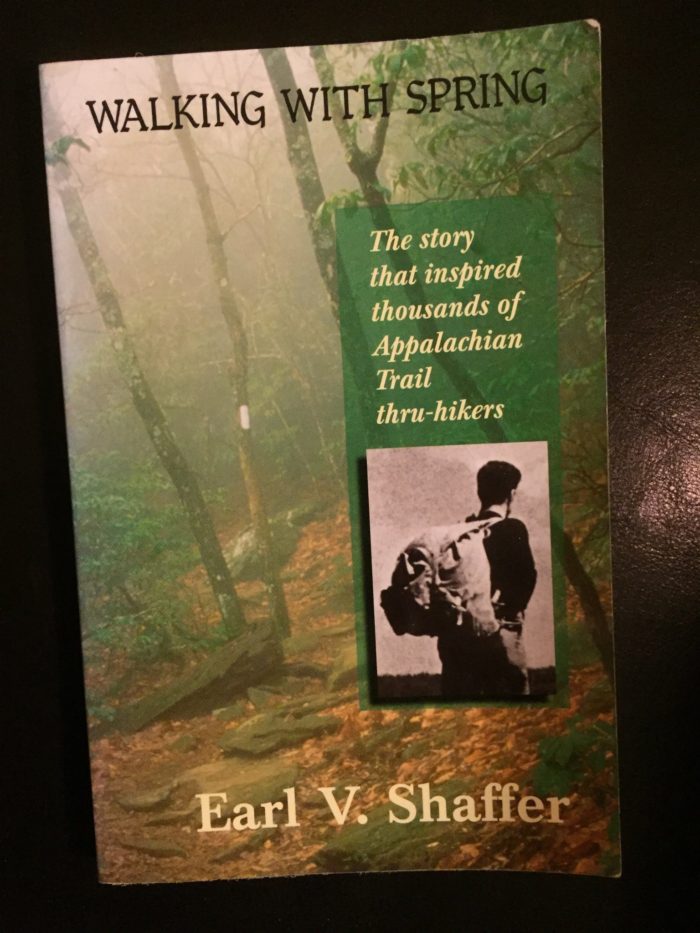 For those who might be unfamiliar with his story, Earl Shaffer was the first individual to complete a continuous end-to-end hike of the Appalachian Trail. Prior to his epic “walk with spring,” Shaffer served four and a half years in the Army during World War Two “without furlough or rest leave,” more than half of it in the Pacific Theater where he saw action as a forward-area radioman. He lost a close friend during the bloody landings at Iwo Jima and, by his own admission, his wartime experience left him confused and depressed. Soon after he returned from the war, he learned about an extraordinary trail that stretched from Georgia to Maine, a trail that no one had ever hiked in one season. Hoping “to walk the Army out of my system,” Shaffer took up the challenge and, in April 1948, embarked upon what he variously referred to as his “Long Cruise” or his “Lone Expedition.” 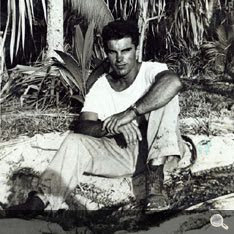 I first read Shaffer’s remarkable account of his journey not long after its original publication in 1983. Revisiting it more than three decades later, I am struck by how different his experience was from that of today’s thru-hikers. I am even more surprised, however, by the extent to which the book reveals the many ways in which the thru-hiking experience has remained fundamentally the same over the past seven decades.

Perhaps the most obvious differences are that the trail started in a different place (Mount Oglethorpe in Georgia as opposed to Springer Mountain in Georgia), followed a somewhat different route, involved much more road walking, was very poorly marked in places (Shaffer initially had trouble even finding Mount Oglethorpe), and was a bit shorter (2,050 miles compared to today’s 2,190 miles).

Another difference concerns everyone’s favorite subject: gear. Although an Army guy, Shaffer started his journey in true joint fashion with an Army Air Corps survival tent, a Marine Corps poncho, and a Navy turtleneck.  Other gear included a rain hat, blanket, compass, sheath knife, small hand ax, sewing kit, snake-bite kit, a cook kit, and a weeks’ worth of food. For clothing, Shaffer had a pair of pants, T-shirts, wool-cotton socks, and bird shooter boots. The only item that did not make it to Maine was the seven-pound tent that Shaffer mailed home after a week. 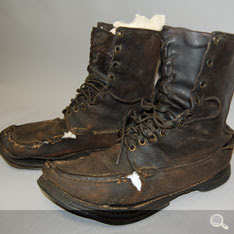 Shaffer’s hiking boots. He wore these for the entire length of the Appalachian Trail, having them resoled twice. (Photo: National Museum of American History)

In other respects, however, Shaffer’s approach to gear will resonate with today’s thru-hikers and perhaps even with some adherents of the ultralight movement. “Long distance backpacking is a rugged business,” Shaffer observed, “and should be handled accordingly. Both bulk and weight are hindrances and must be kept to a minimum. My motto is, carry as little as possible but choose that little with care.” To reduce weight, Shaffer might actually be the first person on record to cut the handle off his toothbrush. After getting rid of his tent, Shaffer relied on a lightweight pole-and-poncho shelter for the remainder of his journey. Perhaps anticipating today’s zero drop shoes, Shaffer told the man repairing his shoes that he “wanted to try walking without heels, as the Indians did” and told the likely confused cobbler not to replace them.

Like hikers today, Shaffer ate simple but calorie-rich foods during his hike. At various points in his account Shaffer mentions meals of Vienna sausages, hard-boiled eggs, oatmeal, canned peaches, and cornmeal mush with raisins, brown sugar, and canned milk. Shaffer noted that “such food isn’t fancy, but it sticks.”

Shaffer’s account is full of trials and tribulations that will be familiar to today’s thru-hikers: dealing with rain, cold, and wintry weather, frequent wrong turns in the early going, foot and blister problems to the point that “Hiking had become an exquisite kind of torture,” bushwhacking around frequent blowdowns, and dealing with hiker hunger. At one point, Shaffer felt himself growing weaker and weaker. He stopped and ate an enormous lunch and all was well again. “It had been a case of starvation pure and simple, despite no unusual sensation of hunger. From that time on my strength increased and so did my food bill.”

Shaffer also experienced problems with bears in Great Smoky Mountains National Park: “Actually, bears can be very dangerous in the Park because they are half tame and not afraid of people,” with mice in shelters that, in one instance, chewed a hole in his bag and left “souvenirs” in everything, forcing him to throw away most of his supplies. He also encountered issues with ticks, with the never-ending debate about the proper pronunciation of Appalachian, and with sheer exhaustion brought upon by the physical demands of the hike. “I kept on but soon I knew I wouldn’t make it. My knees wobbled and my head whirled. Sitting down was the only way to avoid falling. By sheer willpower I unpacked everything that could be wrapped around me for warmth and stretched out on the Trail . . . Never again on the Long Cruise would I come so near to total collapse.” These are all challenges that will be very familiar to today’s generation of Appalachian Trail thru-hikers.

Shaffer walks with  a deep appreciation of the local history and lore of the areas he passes through and with an eye for the natural beauty that surrounds him. He tells us the story behind the naming of Blood Mountain and how it now serves as the home of the Nunnehi, a friendly spirit folk who are “little people with hair reaching to the ground.” He also informs us that Neel Gap (he calls it Neels Gap, with an s) is the home of the Great Frog, leader of the ancient animal council. Reflecting on a cold night spent on a mountaintop after a storm, Shaffer observed, “Such a night is guaranteed to instill a profound respect for the power of nature and the vastness of the universe.” 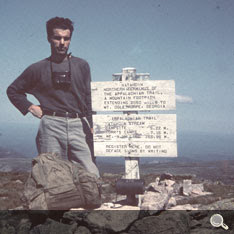 Shaffer atop Mount Katahdin at the end of his journey. (Photo credit: National Museum of American History)

Finally, Shaffer’s account is filled with examples of the kindness of strangers who, at various times provided rides, meals, resupply, or lodging to a dirty and disheveled individual walking from Georgia to Maine, inspiring affirmations of the general (and timeless) goodness of people that anyone who has hiked long sections of the Appalachian Trail has likely experienced.

For such a small book, Walking With Spring is an incredibly rich and rewarding read containing a fascinating mixture of practical details about trail conditions, navigation challenges, and food and shelter requirements, interspersed with interesting historical tidbits, observations on local geography, and encounters with local inhabitants. Even 70 years later, Shaffer’s account of his journey remains a remarkable introduction to the Appalachian Trail and to the experience of being a thru-hiker.

Thanks for reading and hope to see you on the trail.