We Feel Bad for Pennsylvania; It Gets an Undeserved Bad Reputation

I am very happy to be writing to you today from glorious New Jersey, having successfully left Pennsylvania behind us, with all bones and joints intact.

But I think that we need to set the record straight, especially for people who are planning to thru-hike in the future – Pennsylvania isn’t as horrendous as the horror stories make out. Don’t get me wrong; there are most certainly rocks, but they don’t really kick in until the last 50 of the 230 miles in the state. Not bad, right?

However, no one wants to hear about the flat boring bits, so here are some pictures of the big, nasty, gnarly rocks. 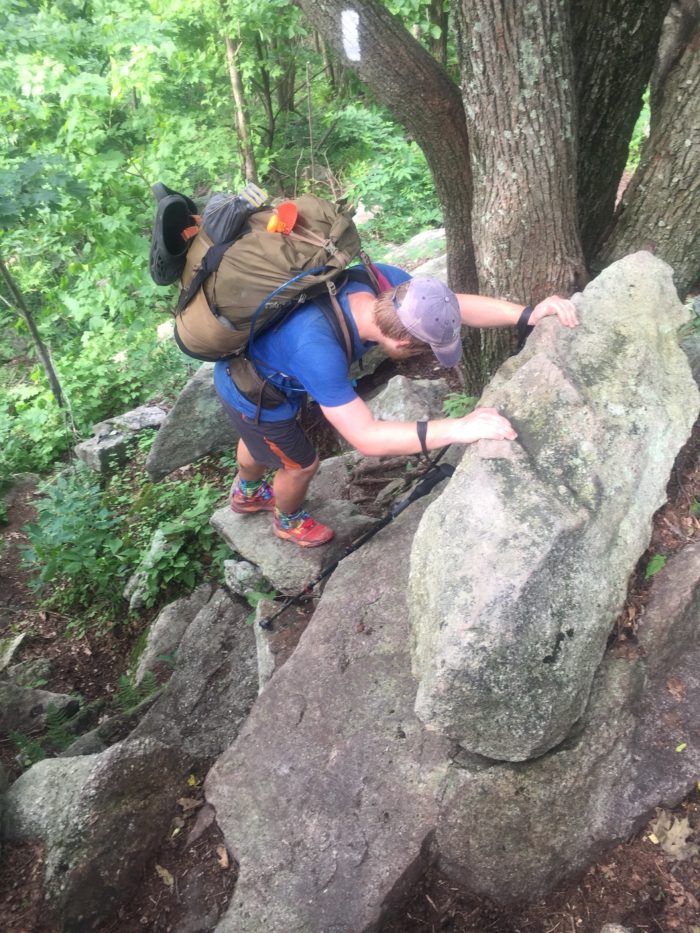 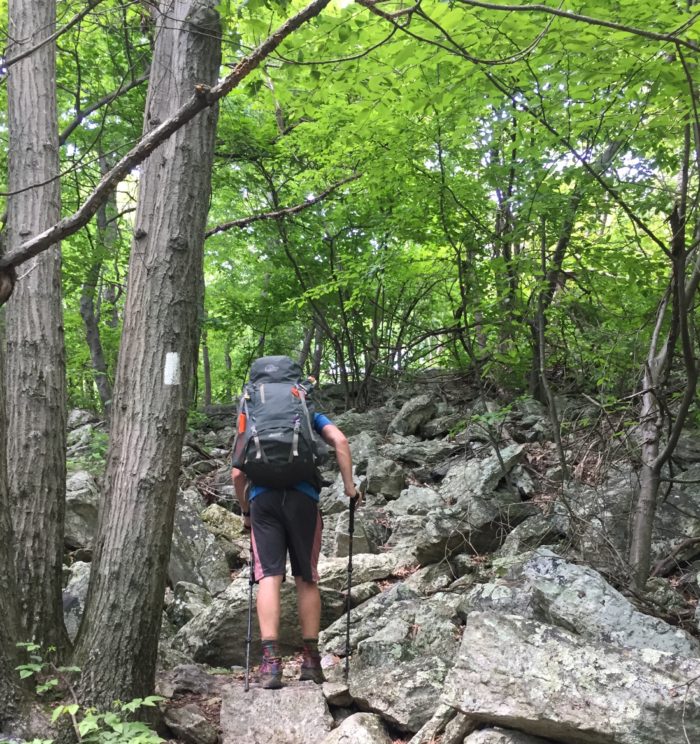 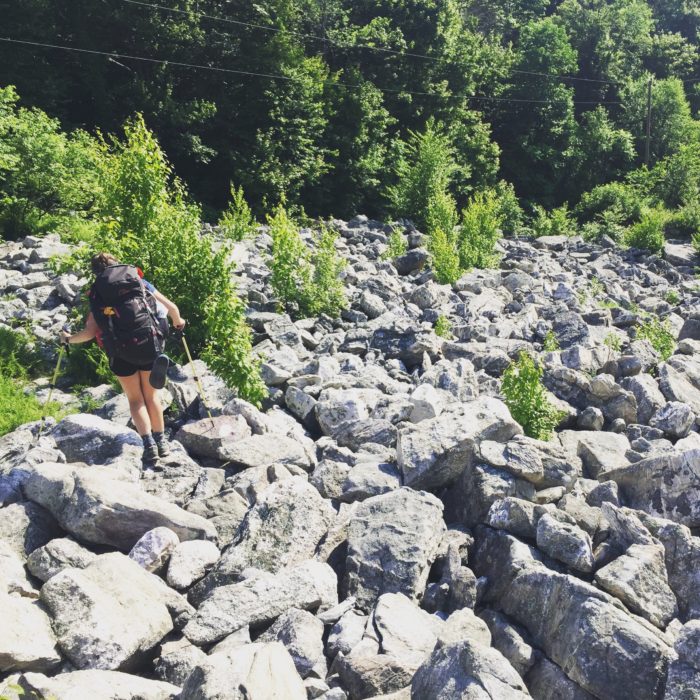 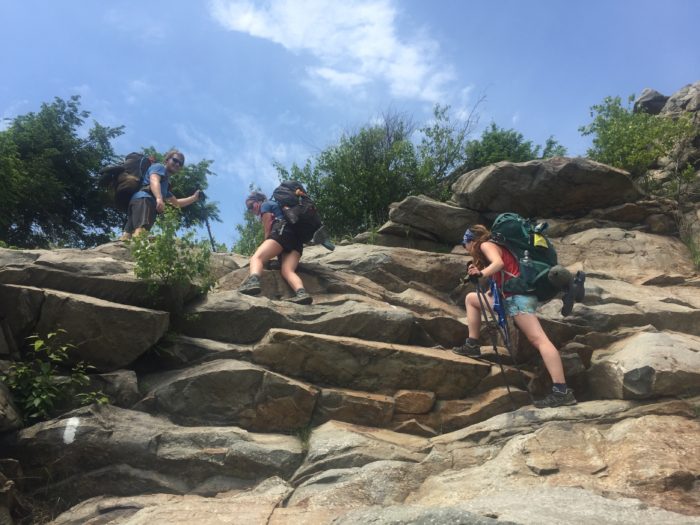 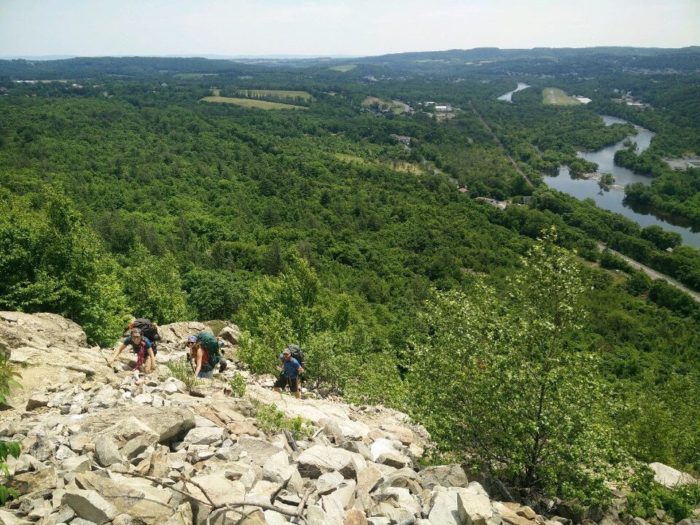 What’s incredible is the fact that actually climbing some of those rocks have been a highlight of the trip (for me, at least). The bottom two photos above were of us and the tramily climbing out of Lehigh Gap. We’d had an easy hike into town in the morning, spent a few hours eating good food and relaxing after that, and only had a measly nine miles out of town to camp. Perfect. To make it even better, it was a glorious day. We knew we had a climb coming out of town, but since leaving Virginia the climbs have been a fraction of what we were used to, so never really anything to worry about. They tend to be short and sharp. However, in this instance, never has the word climb been so apt. It started with a steep ascent up a scree-like path, and then suddenly it turned into a boulder scramble. A nice change from the usual, but I loved it because we all went through it together. Even though it took us an hour to travel 0.7 miles (yup, that’s right) it was a hilarious and fantastic tramily bonding experience. We spent most of the hour laughing at each other for the ridiculously girly noises we were making as we leapt from rock to rock, or as we were reaching the peak of the mountain and Squid Kid thought it was a suitable time to accept a call from his mother (his excuse is that if mom calls, you’ve gotta answer), but the best bit was that we were doing it together. So yes, the rocks were tough and slowed us down, but when in good company, it would seem that it doesn’t matter.

Another highlight (although not for our stomachs) was the infamous half-gallon challenge. At Pine Grove Furnace is a general store that throws the gauntlet down for thru-hikers to attempt to eat four pints of ice cream as fast as they can, and we couldn’t refuse. Oh. My. Goodness. It is so much ice cream. They don’t actually sell four-pint containers, so you have to pick three pints of one flavor and then one pint of another. I thought to keep it interesting I’d go for a fudge and peanut butter cup ice cream for my three pints. What a mistake. It was so ridiculously sweet that after about a quarter of the tub I genuinely think I was getting sugar shakes, making every mouthful increasingly more difficult. I eventually had to remove the peanut butter cups and waited for it to melt slightly so I could drink it like a milkshake – a girl’s gotta do what a girl’s gotta do! When I eventually made it to my final pint I went for peach flavored ice cream; much better. Almost wolfed it down. It seemed to take an age, but we all finally did it. The scores on the doors came in at:

Not the best, but we did it! 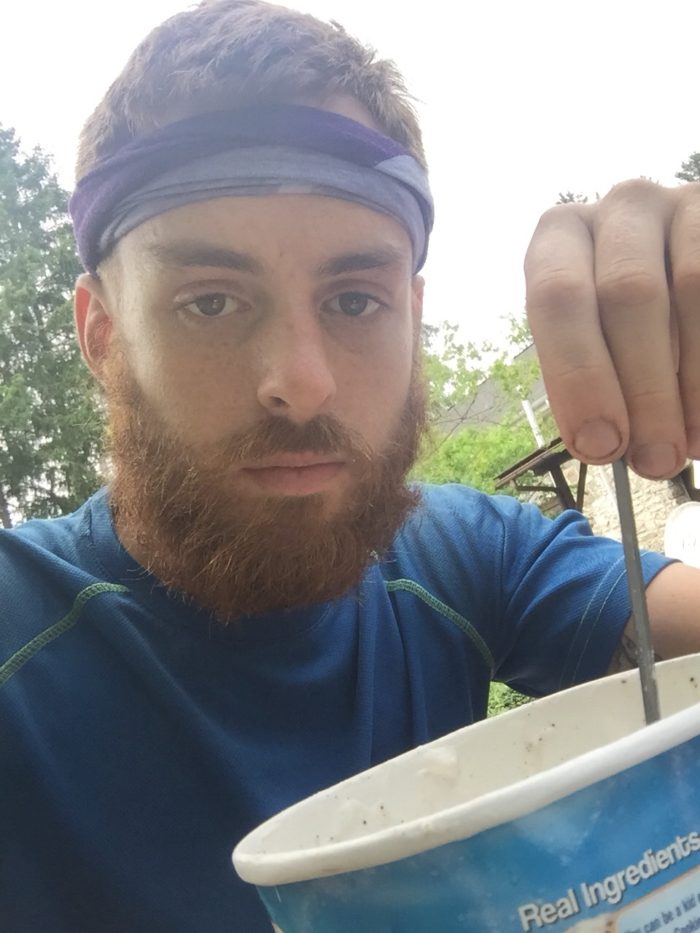 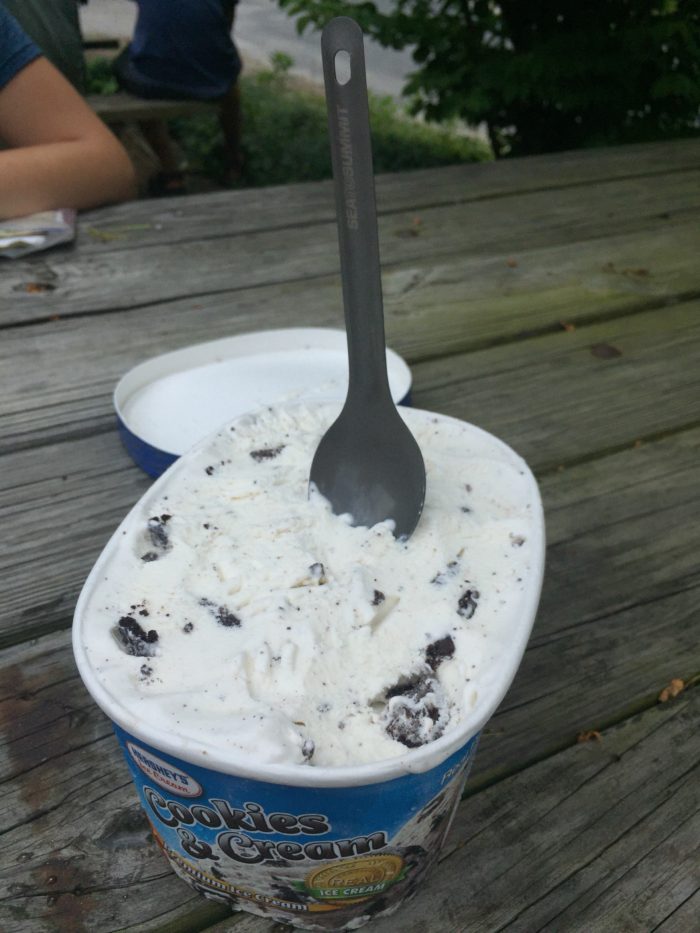 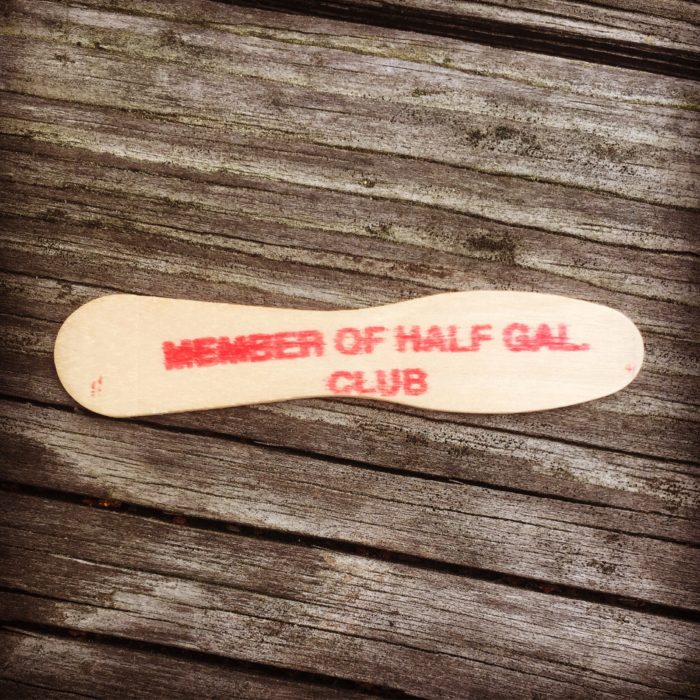 Other than these events, we’ve had a rather lovely few weeks. Because of the rocks slowing us down, we’ve taken to shorter-mile days so that we’re not rushing to camp and can concentrate on our footing, and it’s been really nice. We’ve also managed to take a couple of days off in DC to visit a family friend, and best of all my parents came to visit. We spent two days off trail with normal human clothes, doing normal human things, and catching up on all the stuff we’ve missed back home. It’s been bloody fantastic.

The exciting thing is that once they leave, the next time that we see them will be at the bottom of Katahdin, which is getting incredibly close.

Usually when we sign off these posts we write how all has been well and that we’re both in great shape, but I’m afraid to say that today I can’t. Over the past few weeks my feet have started to seriously hurt – for the women reading this, it felt like the burn of having been wearing heels all night, but for every single step – so we had to do something. The good news is that I went to a podiatrist and he has confirmed that there are no stress fractures. It turns out I have terribly designed feet – thanks mum and dad. The podiatrist told me that my arches are so high that they provide no support at all. All this time on the trail, all my weight and the weight of my pack have been going through my toes and my heels. After 1,000 miles, it’s really taken its toll. I’ve had days of hiking in terrible pain, with every step feeling like I’m walking on glass as my feet scream at me from the pressure being put through them. Fortunately it’s been a relatively easy fix and the podiatrist has given me some insoles that hug my arches and provide the support I haven’t had this whole time, so I’m back on trail and ready to eat up the miles. It was a pretty scary time because we had to start thinking about what if I couldn’t return, but thankfully that bridge didn’t need to be crossed. Yay!

So, feet heeled, we are ready to tackle the 900 or so miles we have left.

Yesterday was a big day. It was our 100-day anniversary of being on trail. After 100 days I feel like we’ve made a real transformation. Gone are the days of fretting about what’s making that noise outside the tent at night, or questioning if we can consistently churn out the miles to make it to the end.

I feel a bit like we’re Tom Hanks in “Cast Away,” progressing from worrying about the sound of coconuts falling, to spearing a fish in the lagoon. 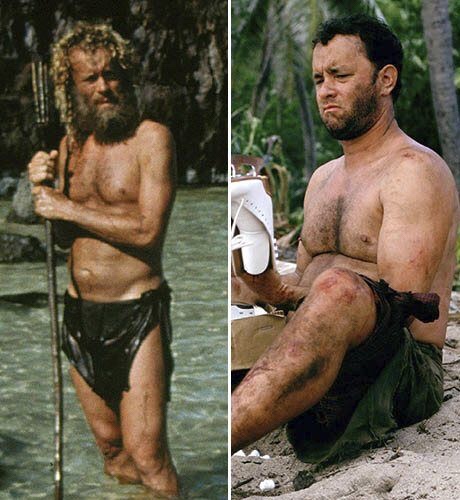 As the miles have passed I’ve become increasingly focused on finding ways to reduce our pack weight. It’s something I regret not putting more research into before we set out, and when I think back to our preparations now, I know I was far too cavalier about it in the runup to setting out. The truth is, over a long-distance hike like this, every pound counts. The lighter your pack is, the far better your hiking day will be.

Your base weight is how much your pack weighs, minus all food and water. We’ve met people with base weights of seven pounds, nine pounds, and 13 pounds. The last time I checked mine, even after aggressively trying to cut weight, mine was 24 pounds. Don’t get me wrong; the ultralighters don’t have it all good. When your pack is that light, your days might be great, but you can pay a price at night. You don’t have the warm layers and perhaps not a robust enough tent to be comfortable through cold, wet nights. Not to mention, almost none of them have a teddy bear to cuddle in the bin bags they have for sleeping bags.

That being said, it should be easy for Robin and me to have reasonably light packs. After all, all our communal kit – our tent, our gas canister and cooker, our water filter, our first aid kit – can all be shared between the two of us. Hikers hiking on their own are carrying all those things on their own, and yet we’re still heavier than probably quite a few of them.

The reason for that is we have a few items that are much heavier than they should be, chief among them, our tent. Weighing in at six pounds, our MSR Elixir 2 tent is a fantastic tent that we sleep very soundly in even during the roughest storm. But in the context of a thru-hike, it’s just too heavy.

Luckily, we’ve underspent against our budget for a couple of months we’ve been out here, so we decided to spend the leftover money on what I’m calling #DreamTent2018. Weighing in at two pounds our new Nemo Blaze 2 is a two-person, two vestibule, two-walled, real tent (compared to the sorts of tents the ultralighters use) that we’re confident we can trust in bad weather, but isn’t going to weigh us down.

We’ve only just picked it up and I’m super excited for its first time where we can see it in all its glory. In every shelter journal we’ve come across since we ordered the tent I’ve been publicizing the party I intend to hold at that first setup. The party will be a huge event and all on trail are invited. 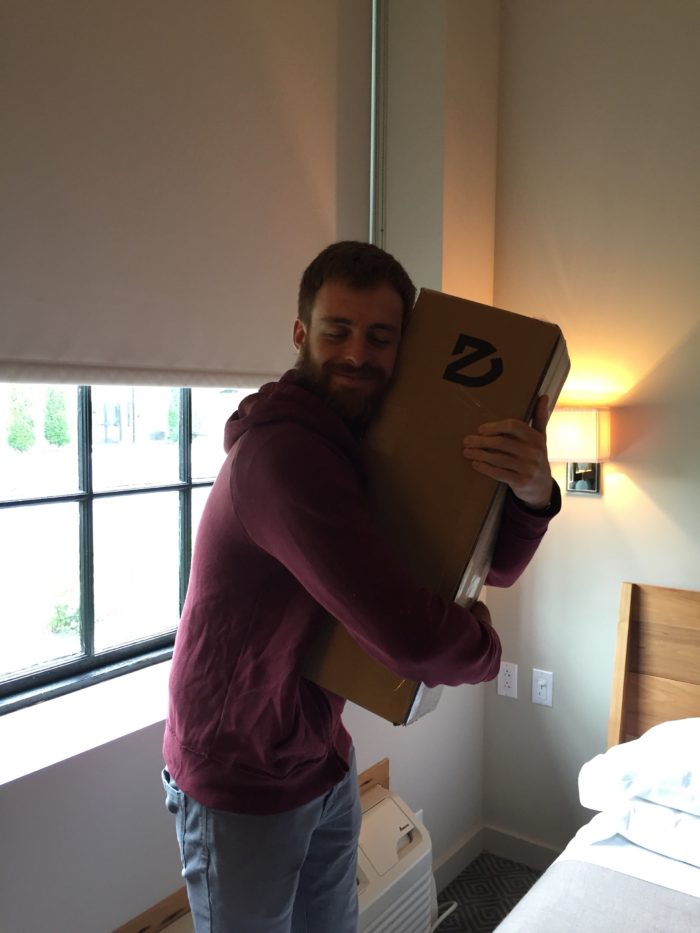