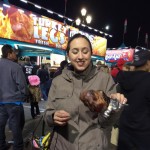 Oh man, this trip kicked my ass as well as my spirit.

It started all fine and good as Maria and I followed the Spear Grass trail in Nelson Lakes National Park through the forest for about 7km. Most of the trails in New Zealand are hard, full of rocks, scree and boulders so the bouncy forest floor was a nice change. I must have gotten to use to hiking over rocks because about 20 minutes into our hike, I slipped on some wet tree roots and took a good tumble down an incline. Not the end of the world, just a bit bruised and dirty for it. 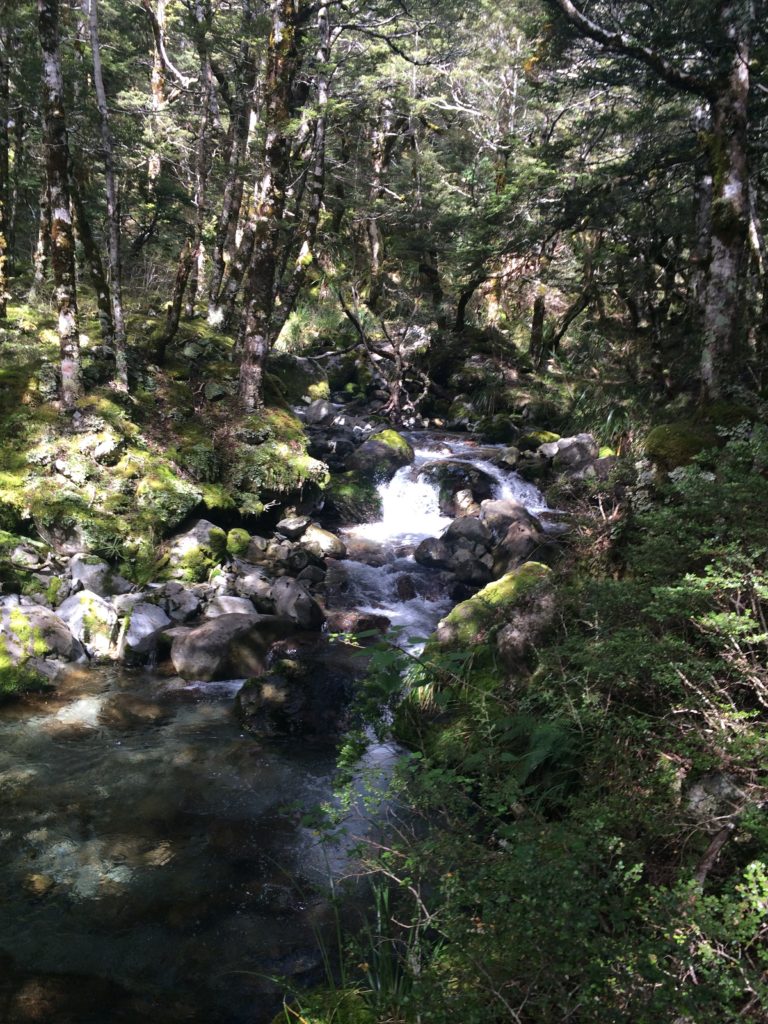 The pretty river cascading through the forest

As the trail continued, we hit our first river crossing, which was fun because it was new, and the cold water felt great on my tired feet. Fast forward several more km and it soon dawned on me that this “trail” I was on follows the same river up the entire mountain, crisscrossing over it continually. Calling this trail a footpath would be generous. Instead, it’s up to you to find your way between orange markers as you bushwhack through the aptly named spear grass. With so many river crossings it didn’t take long until my shoes where soaked through, each step eliciting an uncomfortable squish with each step. 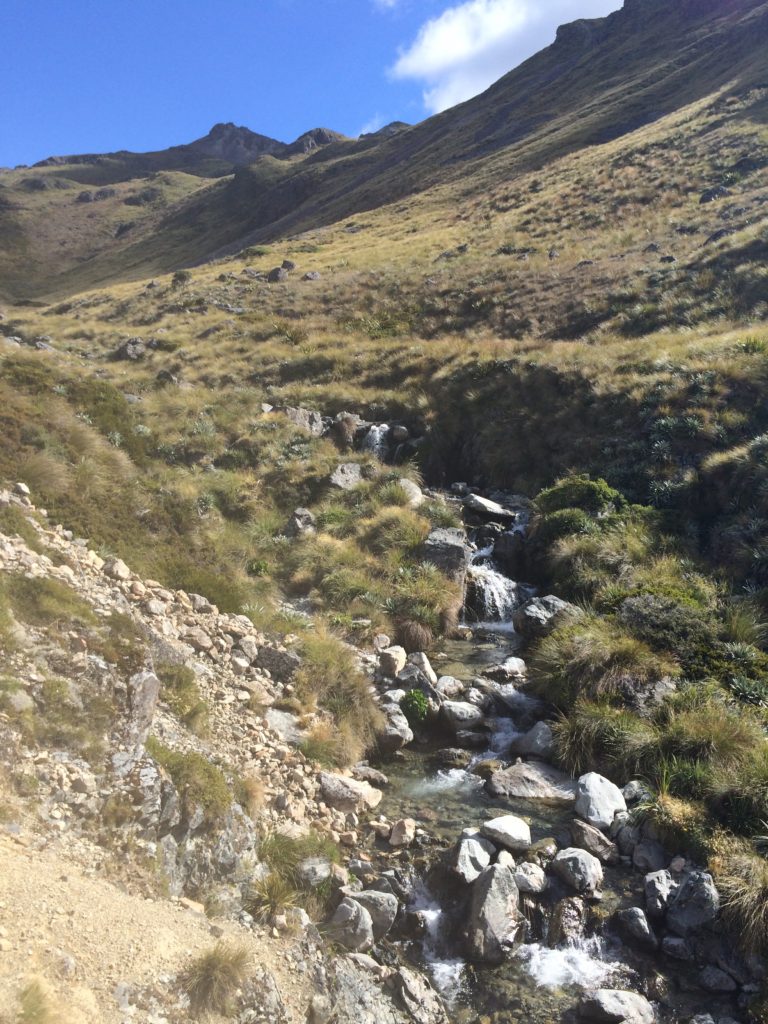 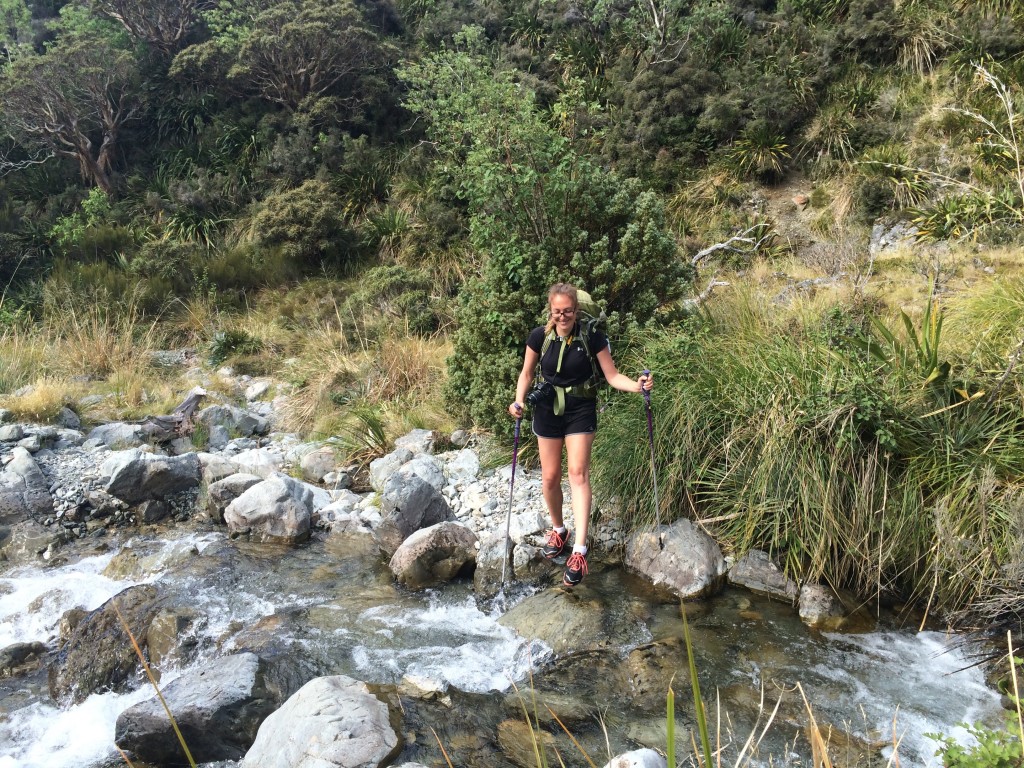 Maria promptly lost her footing and got her shoes wet, I went in two crosses earlier

After 4 hours of getting scrapped by spear grass and soaking my feet in the river, we came to the end of the river. My happiness was cut short as the trail continued ahead strait up a steep grade of scree with no end in sight. This is the point in which I started to crumble. To be fair, I was tired before we hit this trail, but I was also feeling strong after so many days hiking. The easy time I had on the Routeburn Track mademe believe I was really getting my trail legs underneath me. The Spear Grass trail unceremoniously showed me how wrong I was and the scree climb tied a bow on the whole shitty package. But what can you do but put one foot in front of the other and keep going?

So that’s what I did. And then I started to cry. Not just little tears of self pity, but deep sobs from my belly that shook me and made it hard to see the trail in front of me. I know the sobs had less to do with how I was feeling physically to how I was feeling mentally and emotionally, but feeling physically low allowed my walls to come down enough to let some of the sadness out. I know, how could I be sad after spending two months trekking about in New Zealand, right? But alas, our lives continue on back home and the issues you bring to the trail are right there along with you until you give them the chance to be released. My family is undergoing some major, painful changes right now, and while I’m thousands of miles a way, I’m still connected and it still hurts.   The trail has a way of forcing you to feel your feelings, even when you don’t want to. Which is one of the reasons I hike. 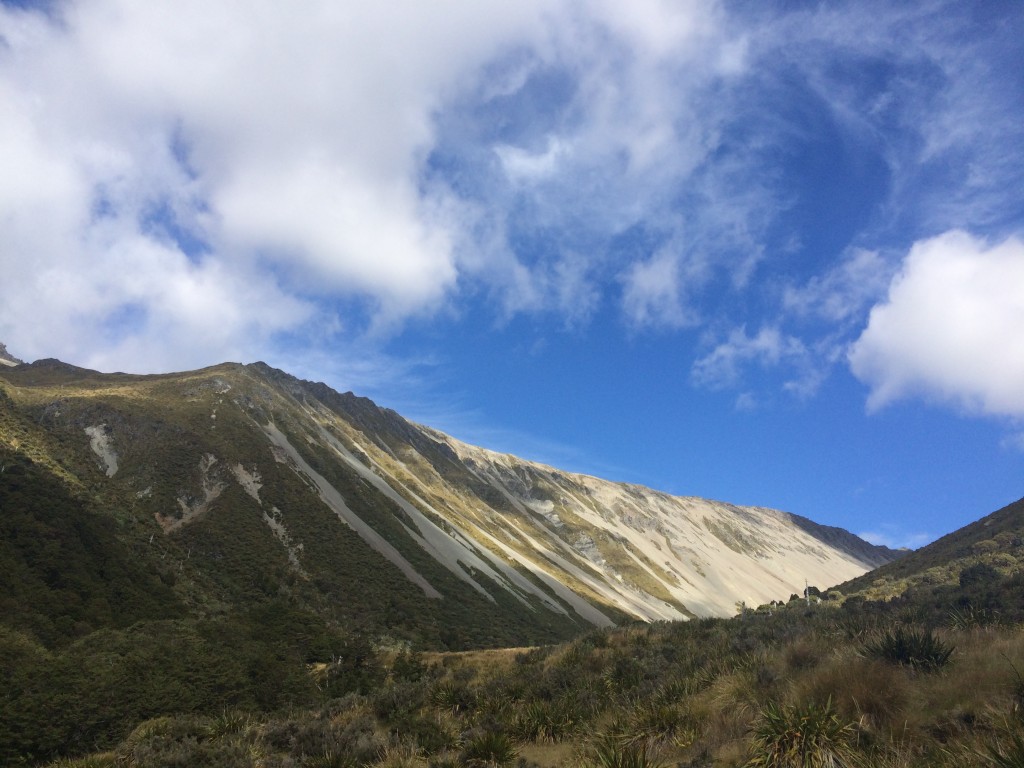 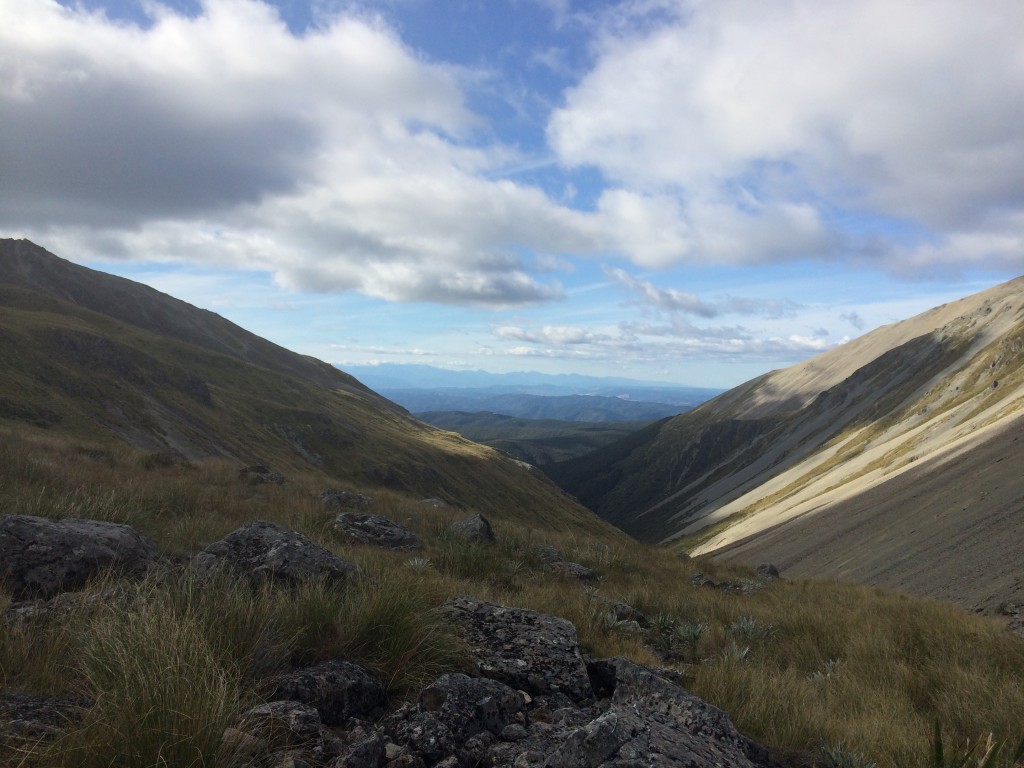 The view from where the river ends and the climb begins

I met up with Maria at the top of the mountain, and I was a mess. She made me sit down, east some food and drink some water. Good friends do that. I decided to put my headphones in for the last hour of the trail, sometime music is just what I need to push through, and I needed it then. The final ascent and descent into Angelus hut would have been beautiful on a clear day, but the clouds had rolled in, so while still beautiful, wemissed all of the epic views this trail promised. After a long 6.5 hours of hiking, I quickly ate and crawled into my sleeping bag. 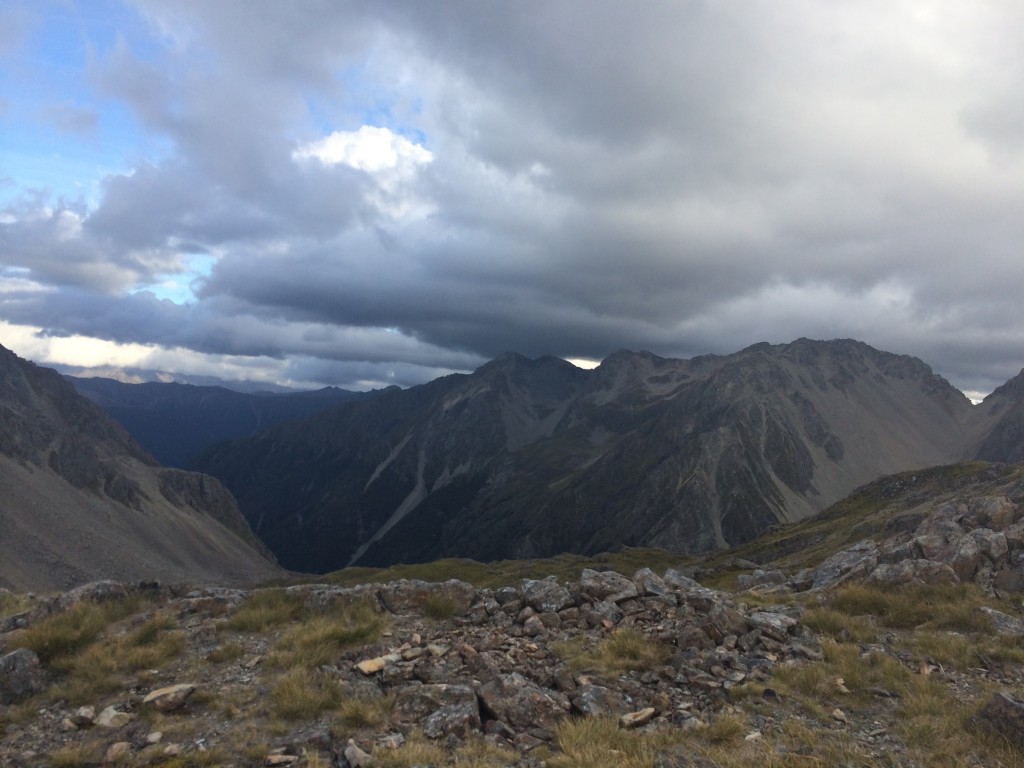 The view after the scree climb, mountains everywhere 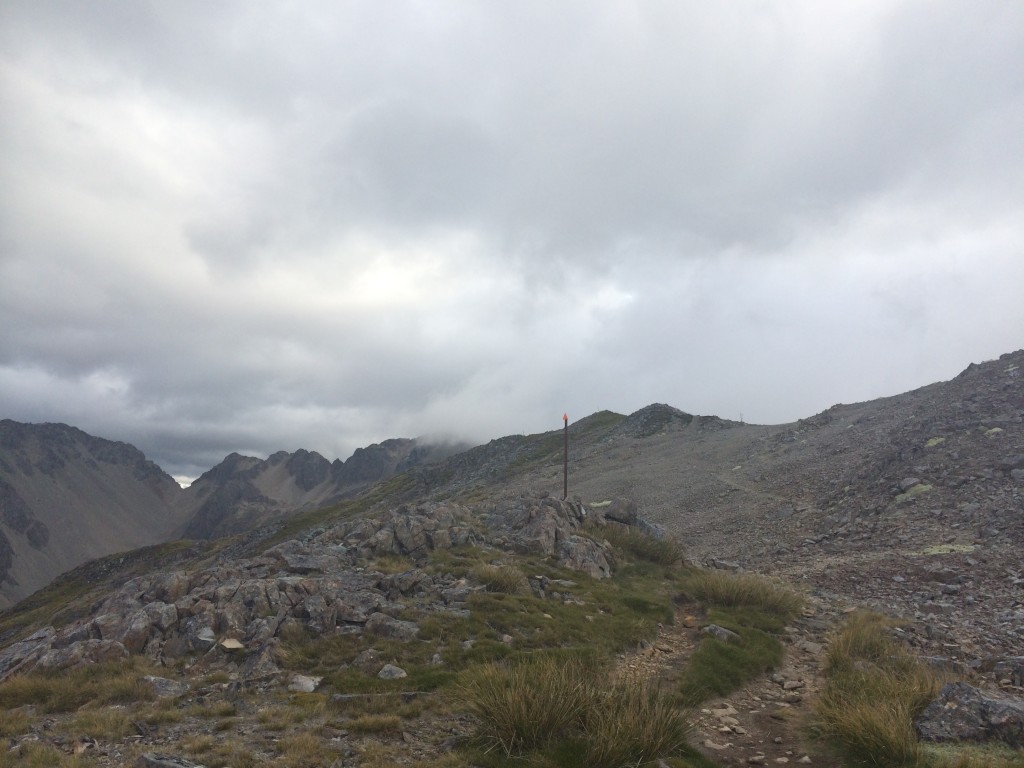 The clouds rolling in, obscuring the view of the epic mountain ranges on all sides 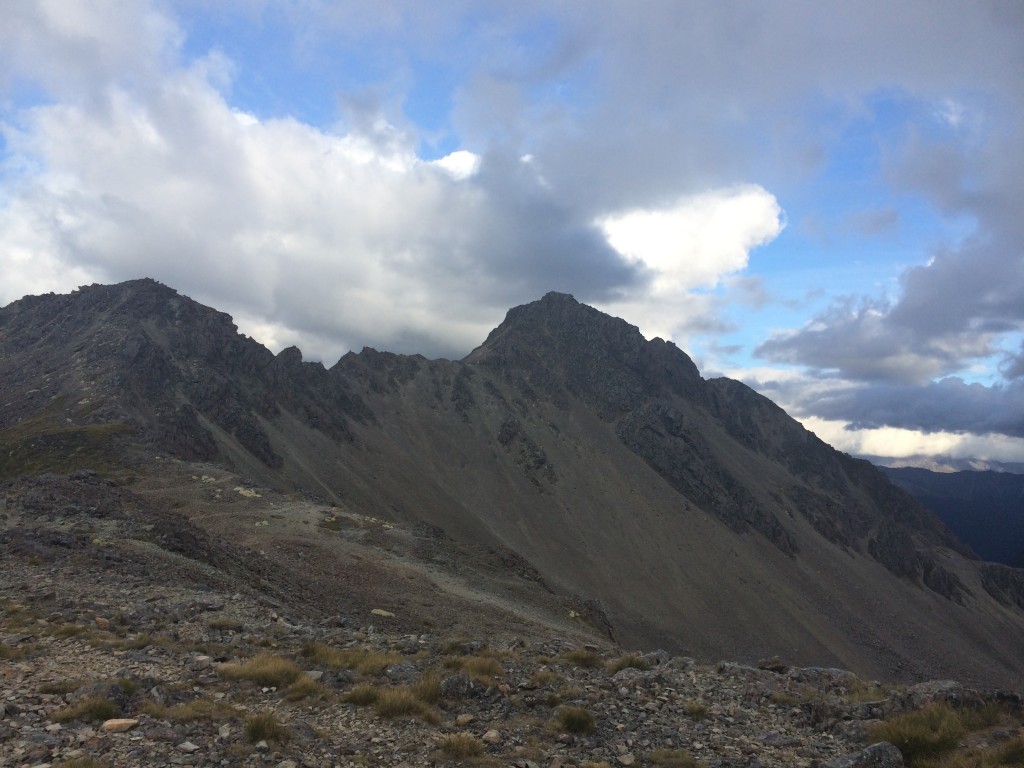 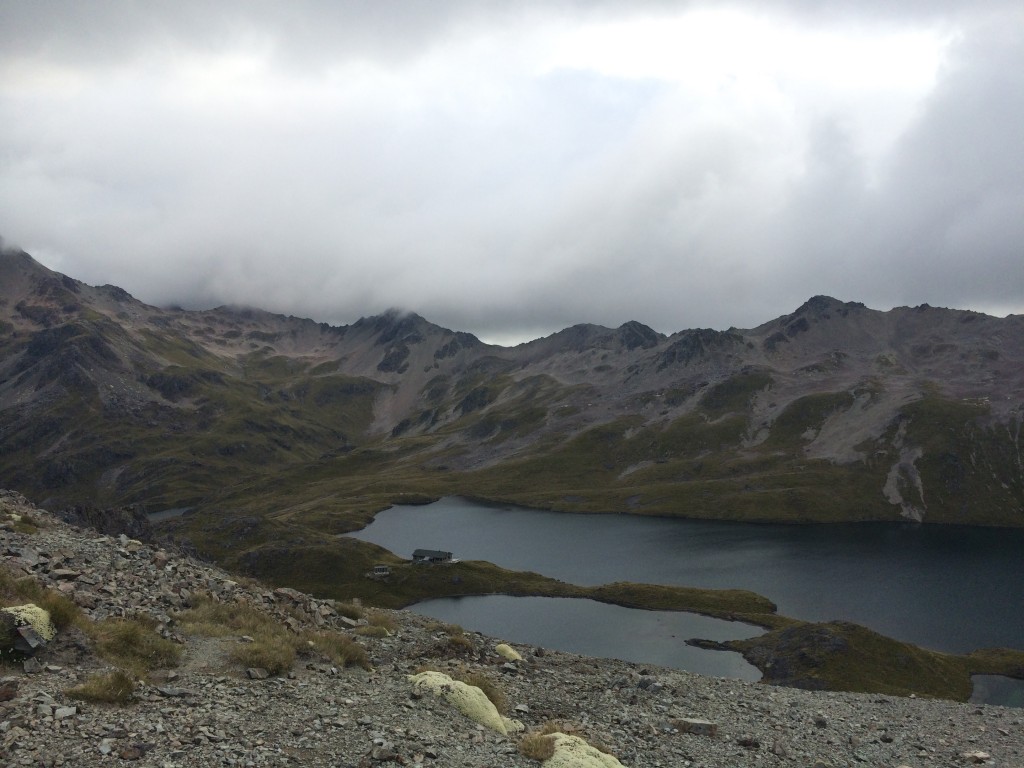 In the morning, I felt better but still drained. The trail had other plans though, and we spent 4 hours climbing and crawling across 8k of ridgeline in the rain, with about 20 meters of visibility. It was tough, so tough in fact, that it took all my concentration to stay focused on putting my feet in the right place and not plummeting down the mountain. Sometimes this type of hiking works for me, cause you’re all in, it can be meditative.Not so much today though. In about two hours I was soaked through and cold, which is one way to learn that rain jackets “wet out” and exposure is a real thing. The highlight of the day was almost getting attacked by a protective Kia (big alpine parrot) on a craggy mountaintop as we hiked too close to her nest. 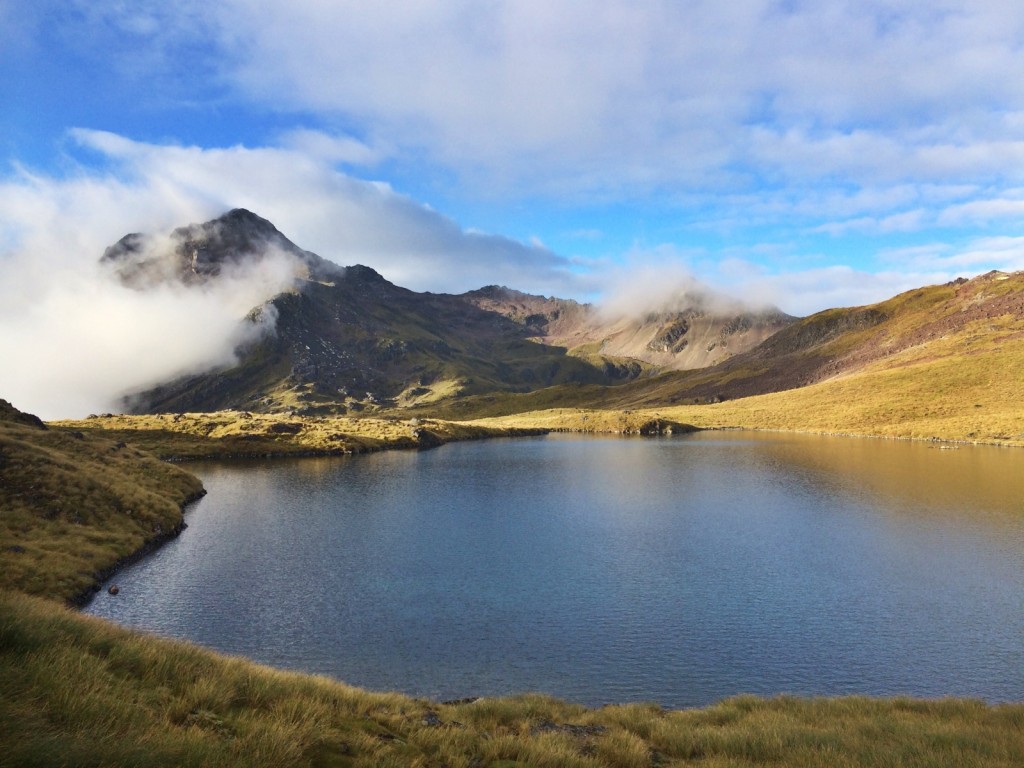 Morning light hitting Angelus lake, grateful that I got to see some blue skies if even for a moment 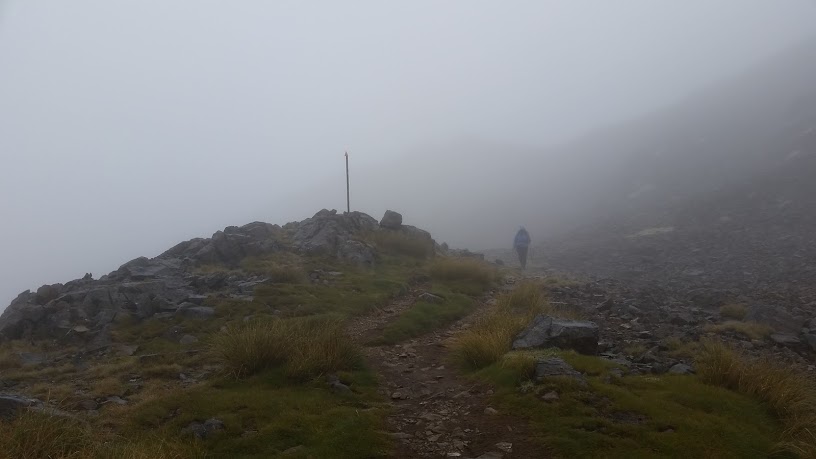 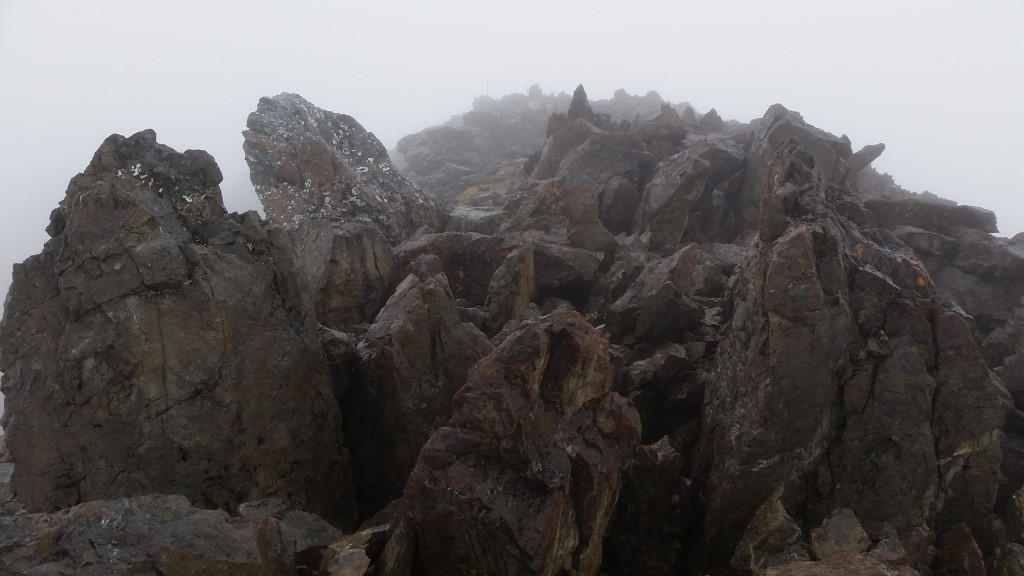 I have to say, I was so happy when the car park came into view 4.5 hours after we left the hut. I tried to fly down the switch backs like I normally do, but my legs where too strained and my feet to store to make great time. Rough hikes can be invigorating and leaving you feeling like a bad ass, this hike just had me feeling worn down and ready for a break. Lucky for us, just two hours later we got to stay in the most beautiful beach house for two nights. Real beds, showers with shoes, great food, company, and two dogs to playwith. It felt insanely luxurious after three weeks of tramping, camping, and hostels.

It also gave me a chance to realize that I’ve got some physical issues to work out. Two days after Nelson Lakes I dida fairly easy 14Km day hike and was in so much pain I wished it was over just an hour after it started. It looks like I’ve strained my tebilous anterior due to my hips/glutes not being strong enough. Instead, I’ve asked my shins, calves and feet to do all the stabilizing and supporting while my hips and glutes don’t do there fair share of the work. The strain has radiated down to my feet and causing the beginning signs of plantars fasciitis. Not good when you know you have 5 months of hiking in front of you. So I’m being proactive, visiting sports therapist and osteopaths as I continue to travel. I’m trying to figure it out to what degree my shoes, my orthotics and overuse are contributing. I’m switching from custom shoeinserts to Superfeet for the time being, which seems to be helping. I’ll be making special trips to the best shoe outfitters in New Zealand to try to look into more depth into my shoe choice. I’ll be do more hip stretching and straightening and making an effort to walk from my core rather my feet. I’m also taking a full week off of hiking, which is hard to do in New Zealand, but I’ve got to keep my priorities in line.I want to make it to Katahadin. 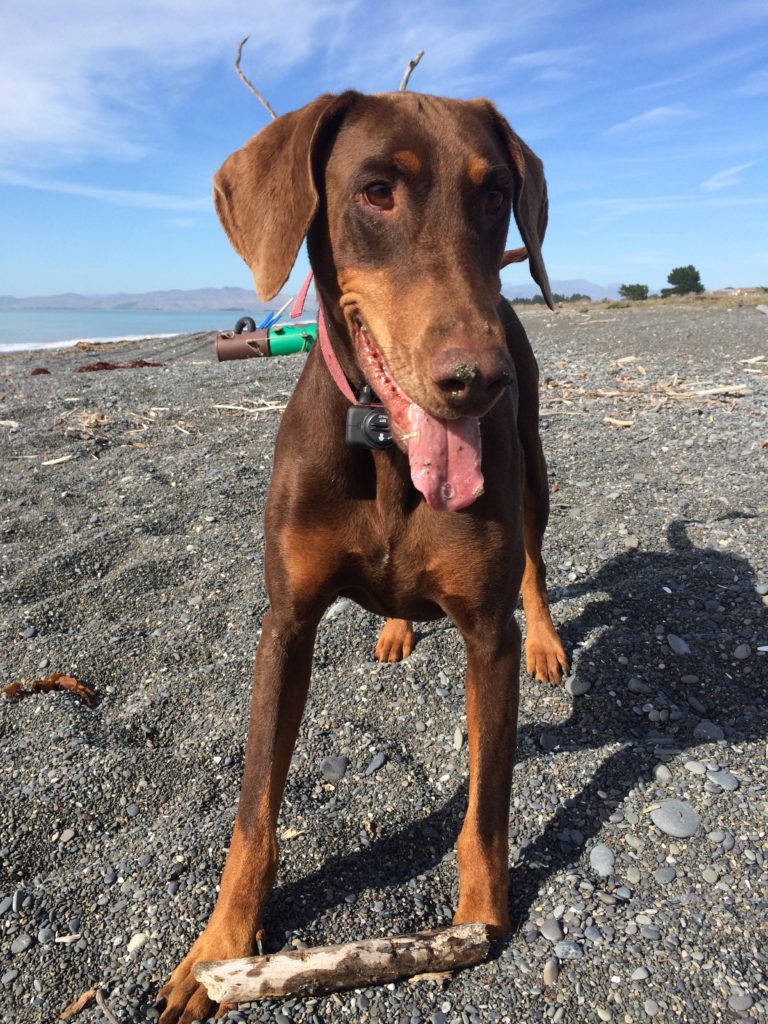 who wants to play fetch? 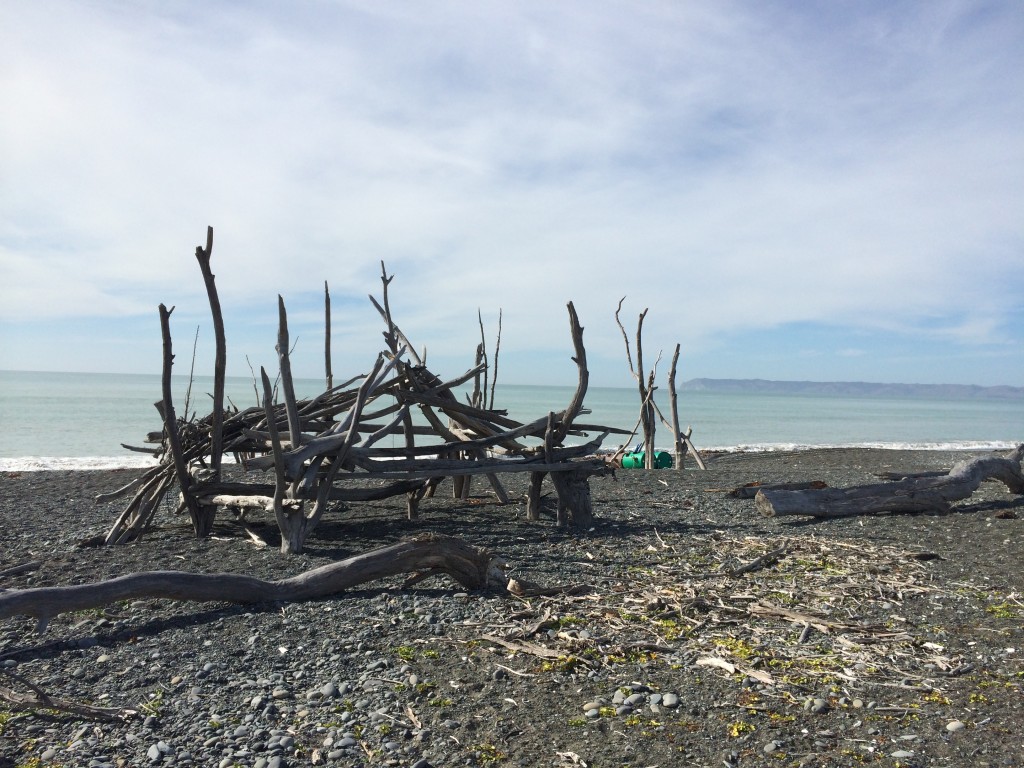 One of several drift wood huts on the shore 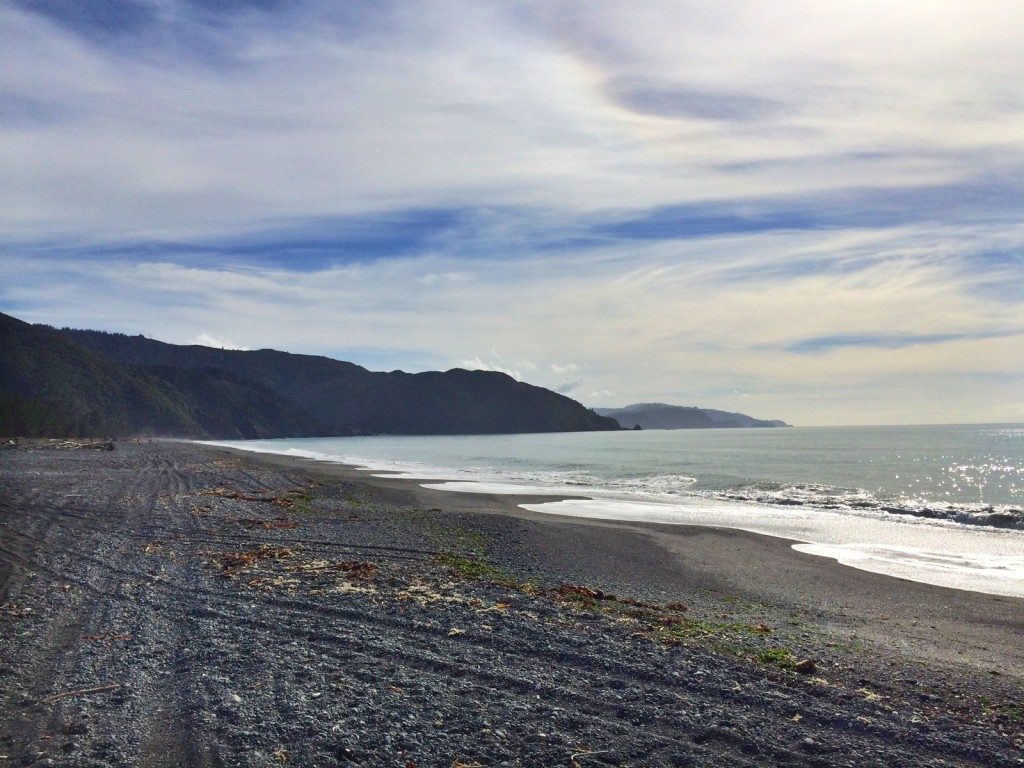 Daughter, sister, teacher, organic farmer, MBA student, I’ve had a lot of roles in my 30-years. Before joining the corporate world in the fall, there is one more role I’d like to add to the list: a 2015 AT thru-hiker. So Springer Mountain, I’ll see you in April. Until then, I’ll be planning, traveling to NZ to study abroad and trying to graduate.