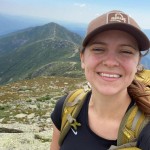 I first put this story into words a year ago – but my 2020 NOBO attempt of the AT quickly turned into a NO-GO without a single step on trail. The good news out of all this is I’m here to share my story with the Trek in 2021! I know I’m not the only one who had their plans changed/ruined/interrupted/etc. thanks to Covid, so I’ll save my thoughts on that for another time.

I think we can all agree 2020 has been a weird year, but one thing never changed for me – why I want to thru hike the Appalachian Trail. My name is Alexi Deering, and here is my why:

I was a sophomore in my high school English class when I first decided, “I’m going to do that. I’m going to hike the AT someday.”  We had just finished reading Bill Bryson’s A Walk in the Woods and I knew.  I didn’t know what, when, or how but I knew that hiking the Appalachian Trail was something for my bucket list. Fast forward to 11 years later – and someday is now!  I officially gave my notice, and I’m quitting my big kid job. I’m trading in my engineering degree and steel toes for a guidebook and trail runners. It’s f***ing go time! On March 11th, 2021 I’m going to begin my journey of thru hiking the Appalachian Trail. (For real this time). That’s the exciting part, the fun part. And part of me wants to keep this light-hearted, keep it just fun and exciting, but the other part of me wants to tell you why. The REAL reason why.

I don’t mean to be somber, and I wish this wasn’t the story I was telling you. I really, really wish it wasn’t. Instead, I would love to tell you about how my brother and I were starting out on this adventure together, to tell you all about how he had kicked his habit.  But that’s not the case, and so this is my real “why”.

It’s been almost two years since I was reminded in the worst way that life is short and fragile. It was on March 5th, 2019 that I found out tomorrow wasn’t promised. I had just finished a twelve-hour night shift and got out of the shower. It was sometime around 7 o’clock in the morning and my mother was calling me. It was a Tuesday.  And my brother was dead.

Andrew, my big brother, had been battling a drug addiction for years. Some days I thought he was winning. See, he was smart like that, he lulled me, all of us really, into a state of accepting it. He had bad days, but he also had really good days. Days where I was sure he would never be someone who died from it. If he could come to my nephew’s basketball game and Sunday brunch, he wasn’t the type of user that could slip up. He had a bad habit, but he had it together. That’s what I thought anyway, or maybe just what I chose to believe.  Sure, on his bad days I would argue and challenge him. We would fight, he’d get sober, and we’d make up. That’s how the cycle went.  Bad days, good days, arguing, making up. Again and again and again. Then things started to change. I could tell he was depressed. Something was different. He was saying things about how he needed to get out of where he was. How he needed something to live for. How he was proud of me. When I would check on him and ask how he was he would say simply “I’m alive.”  And my heart was breaking for him. He was a good guy. The drug habit didn’t change that. I read once that drugs don’t discriminate, and I’m here to promise you that’s true. He just was fighting a battle and I think he was finally starting to lose. I knew I needed to act if I wanted to try and help my big brother. The yelling and arguing with him and telling him he needed to change wouldn’t work, it never had in the past.

I asked him if he would quit his job and if we could hike the trail together. I thought it could give him that reset he needed, and I’d get to hike the AT with my big brother. It was around Christmas time and I wanted to hike NOBO in March of 2019. It wouldn’t give us much time to prep, but I think he was considering the idea when he got into some legal implications. He was on bail conditions and couldn’t leave the state. The discussion led to an idea for a 2020 start date instead. It would give us time to prep and plan. It made sense. He was excited! He was going to use the next year to get cleaned up, and have something to look forward to. Or that’s how I took it. Maybe it’s what he meant, maybe it’s what he intended. That’s the Andrew I am going to remember. One who was excited and knew he had things to live for. And again, I wish that were the story I was telling you.  But in a hotel room in New Jersey on a Monday night two years ago something went all wrong. His workmate tried unsuccessfully to wake him the next morning, and my heart was broken.

So that’s my why. Because now is the time, and because this is more than just a hike for me. It’s for my brother too. I owe it to him, to us. Who knows if I will wake up tomorrow, let alone next year. I could push this off because he’s not here to go with me. I could make up a million excuses. But how long can I push it off before I lose the opportunity too? Before I’m not physically able, or financially able, or if I have obligations that prevent me from going.  Life is short, now is the time. I got a very harsh reminder of that, and I’m not going to waste it.

I don’t want the hike to be in sadness for the loss of my brother, I want it to be in joy for the spirit he had. Everything he did, he did wholeheartedly. I remember my mother describing him as “big” in his eulogy, and that is so fitting. He had a big heart, a big spirit, a big attitude… everything about him. And I loved every bit of it (ok ok fine, most of the time!)

So here’s to the next adventure in my life. Although Andrew may not be here physically, I see signs of him. I know he’s up there looking down at me, and cheering me on. And I’m positive he’s doing it loudly. NOBO 2021, baby! 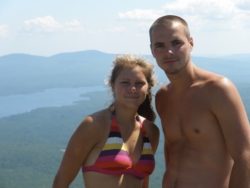 I'm an engineer hopefully turned dirtbag come March! Hiking the AT NOBO with my pup, Tuckerman. We're always down for an adventure and a beer. Cheers!