Why I Don’t Know Why I’m Hiking the AT

The summer after second grade my swim team was coached by a guy named Dan.

At that point I’d been swimming competitively for nearly five years, but Dan is the first coach I remember. He’s also the first person I knew who set out to hike the Appalachian Trail. 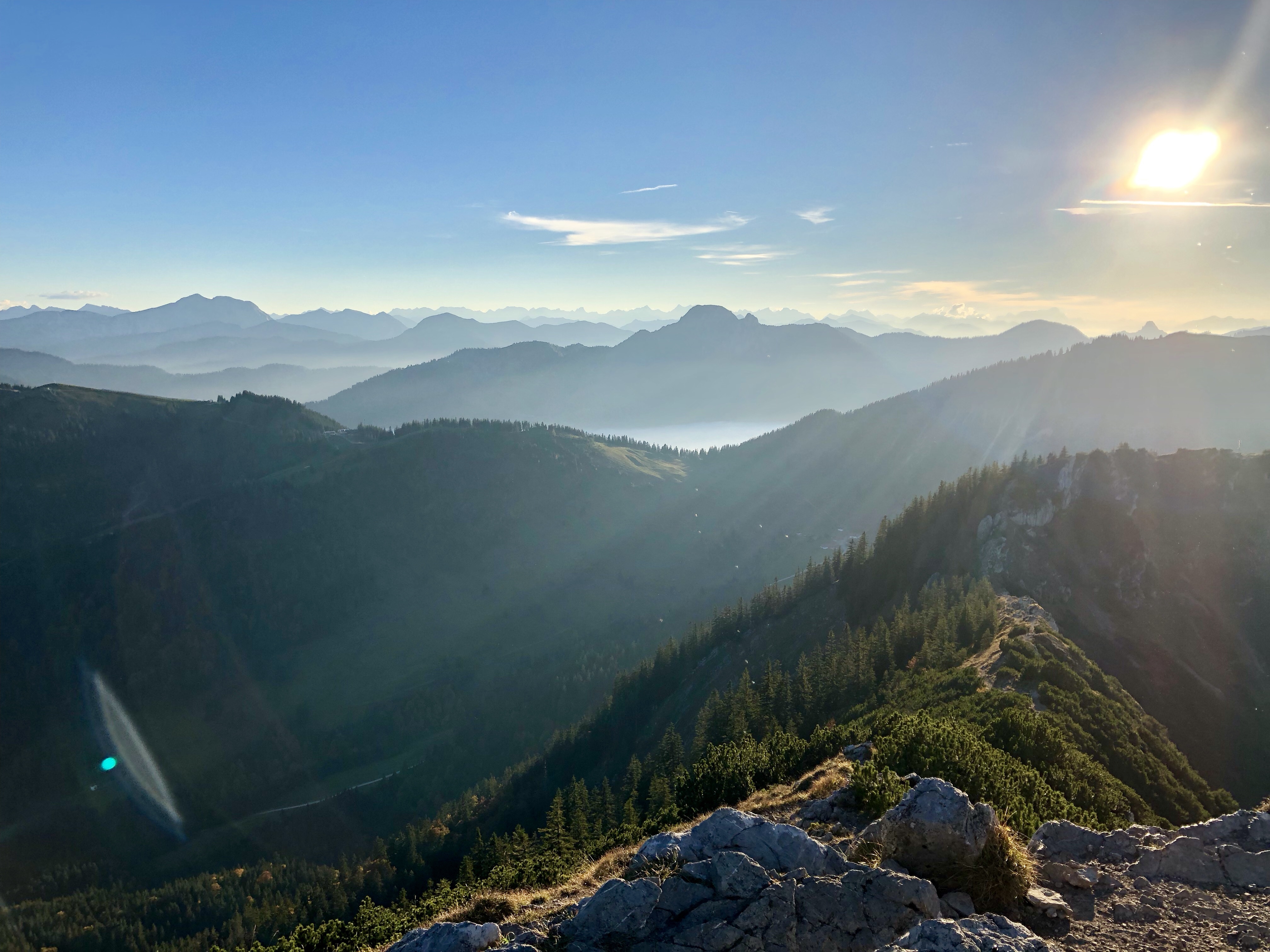 Dan had shaggy, chlorine-bleached hair, leathery skin that was always on the cusp of serious sunburn, and he was reliably two minutes late to practice.

At precisely 9:02 a.m. and 5:02 p.m. each day he’d screech through the polished country club parking lot, shredding the knobby tires of his mud-splattered mountain bike (and later, his equally mud-splattered, door-, roof- and seatbeltless Jeep) and shuffle-jog onto the pool deck with one of those goofy apologetic smiles that just can’t be denied.

For the first few weeks of summer Dan drew disapproving glowers from the concerned parents of young swimmers. But eventually, most of them came around to him, as they watched how he crammed more flashes of enthusiasm and encouragement and “right on dude!” into 58 minutes than most coaches could muster in an entire season.

Dan gained the swimmers’ parents’ approval and even some affection when they realized that this young, unshorn chronically tardy hooligan actually cared about coaching. And deep down, on like a character level, caring always says much more about a person’s integrity and responsibility than timeliness or dermatological prudence.

But near the end of the summer, just as parents were beginning to hover more than like two feet from the end of his lanes, Dan announced that in three days—on Monday morning—he’d be leaving to hike the Appalachian Trail.

I didn’t understand the ensuing fuss—the dropped jaws and non-exaggerated gasps of incredulity and the “whaaat you can’t leave!” from the mouths of parents and older swimmers. I’d hiked trails before, even some ‘long’ ones, so in my opinion this was a posh country club overreaction to a pretty tame outdoorsie thing.

Yet I still decided to look into this trail that Dan would be hiking Monday. I wanted to scope it out, see if he’d be absent or late(r than usual) for afternoon practice.

I went home and asked my dad if he was expecting any phone calls and if not, if I could use the internet to look something up. He said he wasn’t, and sure, and followed me down to the computer room where he unplugged the phone line from the phone and plugged it into the back of the warm chattering tower on the desk. Then he turned on the monitor.

“What are you looking up?” Dad asked, as the curved glass screen awoke with a staticky yawn.

“The Appapalachian Trail. Coach Dan’s hiking it Monday morning and I want to see how far it is. Cause if he’s gonna miss afternoon practice I don’t wanna go. Cause we’ll have coach Steve. And Coach Steve’s mean.”

My dad chuckled. “The Appalachian trail, huh? Well, if it’s as long as I think it is, he’s got a slim chance of making it home by 5pm. But we’ll check the trail map anyways, just to be sure.”

Once the monitor had reached its full brightness and I could practically feel the electric field fuzziness on my cheeks, I doubled-clicked the sleek grainy internet E and waited patiently for the google to load.

“So how long is it? The appapaplachian trail?”
“Pretty long.”
“Like longer than the trail home from church?”

On Sunday mornings my dad would often meet me after Sunday school and take me on a hike. We’d make our way down Franklin Street, through the shady Bolin Creek trails, and all the way back to our house.

It was at least a 4 mile trek that took a hefty chunk of time out of the already-too-short weekend, but I much preferred it to the alternative: doodling on the back of donation cards with an awkwardly small dull pencil that had no eraser while sitting, silently – save 30 seconds of Peace Be With You And Also With You’s with octogenarian You’s I’d never seen before – all while some gray teachery guy or gal yapped on and on and on about I never even knew what.

So while my mom and sister and brothers sat / listened / didn’t listen / doodled, I hiked with my dad. Sometimes near the end of the hike we’d even stop for pizza and a coke at the mall, a treat which my dad emphasized I was not under any circumstances to mention to my mother or siblings.

But so anyways, “Yeah,” my dad said. “It’s a bit longer than the walk home from church. But let’s just check.”

Once the internet was ready I bent my head over the plasticky keyboard and pecked at it with an index finger.
Apap
“Hmm not quite,” Dad said.
Apup
“Actually the second a was right, but there are two p’s first.”
Appapal
“I think you’ve got one too many Ap’s in there.”
Appalatian
“Almost… what else makes a chuh- sound?”
Appalachun
“Ah… somewhere between this one and the last one…”
Appalachian
“There it is!”
…trail

That can’t be right, I thought.

But sure enough, when I clicked the little magnifying glass, and after another 5 or so minutes, strings of blue and green and black text began stuttering their way across the screen. I scanned for numbers, for “miles”, and when I found the two together my jaw dropped, too.

“Two thousand one hundred and ninety point seven miles?” I said, face pressed so close to the still-loading screen that a flare of static bit the tip of my nose. Surely that decimal point is wrong. Can the internet be wrong?

“Hmm, I thought it was at least twenty-two hundred.”

I was devastated. Dan was fit, but even after we’d calculated – at my insistence – how long it would take for him to finish the whole trail at a conservative 4 minutes per mile, there was no in heck way he’d make it back for afternoon practice, even on his generous plus-two schedule.

The next day at practice I was still standing in a hot gravelly puddle by the side of the pool when Dan shuffle-jogged onto the deck.

“What’s up dude? I thought you’d’ve already crushed 200 fly by now. Everything cool?”

I stared down at the black line that ran along the bottom of the pool, down the center of the lane, terminating in a blocky T precisely 5 feet before each wall.

The pool water was choppy with waves; alternating blue- and white-finned floats along the lane lines jostling and rotating, one fin-angle at a time; the lines themselves arcing ever so slightly into faint pool-wide parabolas that opened towards some of the more turbulent and crowded lanes; and so the black line I was staring at was wiggling, shifting, impossible to pin down ocularly. I felt dizzy.

I turned around with a look that I hoped looked incredulous but was probably more pitiful. The sun was still high in the cloudless pale summer sky, and reflexively my left eye contracted hard shut as I looked up towards Dan.

Dan smiled. Not his usual toothy, uninhibited, beaming smile, but like a sort of shy, polite, “ah, I see” smile.

I raised my left hand over the same-side eyebrow, still holding goggles in my thumb’s crook. The dry plasticky goggle strap pull gently at the hairs on the side of my face.

Now Dan’s eyes squinted not quite shut, and he looked off and up to my left. His mouth was drawn into a not-unhappy sort of contemplative frown, his elbows out, hands resting on bony hips.

I blinked. Scratched at a dry eyebrow.

Dan’s eyes turned back to me, still squinting, his mouth still frowned. Then he smiled, a classic-Dan toothy smile, and in one smooth shrug of his shoulders lifted hands from hips and into a “oh well” gesture before letting them fall and slap lazily against the sides of his board shorts.

I nodded, smiled. Pressed my goggles against my eyes until I felt the gulp of vacuum-sealing, yanked the thin elastic strap over my head, and leapt into the pool one-foot first, jackknife-style, sending (I knew without seeing) a mushroom of spray up and behind me.

Then I pushed off the smooth cement and twisted mid-water, only to see Dan standing far from the pool’s edge, safely unsoaked, between a pair of lounge chairs on which two very confused older women had moments ago been reading the same pulp fiction mystery novel.

“Not today dude! Not today!”

As I sprinted through warmup I thought about what Dan had said. Or rather, what he hadn’t said. About Why he was hiking the Appalachian trail.

And in a way I didn’t understand – a way I still don’t understand, like today, completely – Dan’s non-answer was entirely sufficient.

It made sense that his hike made no sense – that there was no Why. That he didn’t know the Why or even the If of this hike made it more exciting, mysterious and alluring and even a bit terrifying in a daring way.

And all that mystery and excitement and even the terror, it made me want to do it too – hike the AT. I knew I’d also never know Why, or If, no matter how much I philosophized and planned and practiced for it – well, I wouldn’t know unless I tried, that’s for sure.

But if I did try, maybe some answers would appear. If I do set out to hike the Appalachian Trail, then no matter what – either way, at the end or somewhere in the middle of it – I’ll have an answer for If. And maybe, hopefully – and again, either way – I’ll also have a real true answer for Why.

After earning my degree in Applied Math from the University of North Carolina I futzed around a bit in the medical research industry before deciding to take a break to hike the AT. I’m a writer by hobby, a runner by nature, and I enjoy long runs on the beach and candlelit dinners - or dinners of any sort, for that matter.