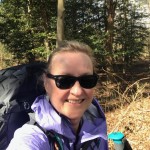 Gone Wild in the Wilderness: PART 1 The Beginning

For SOBOs the Wilderness is NO JOKE! 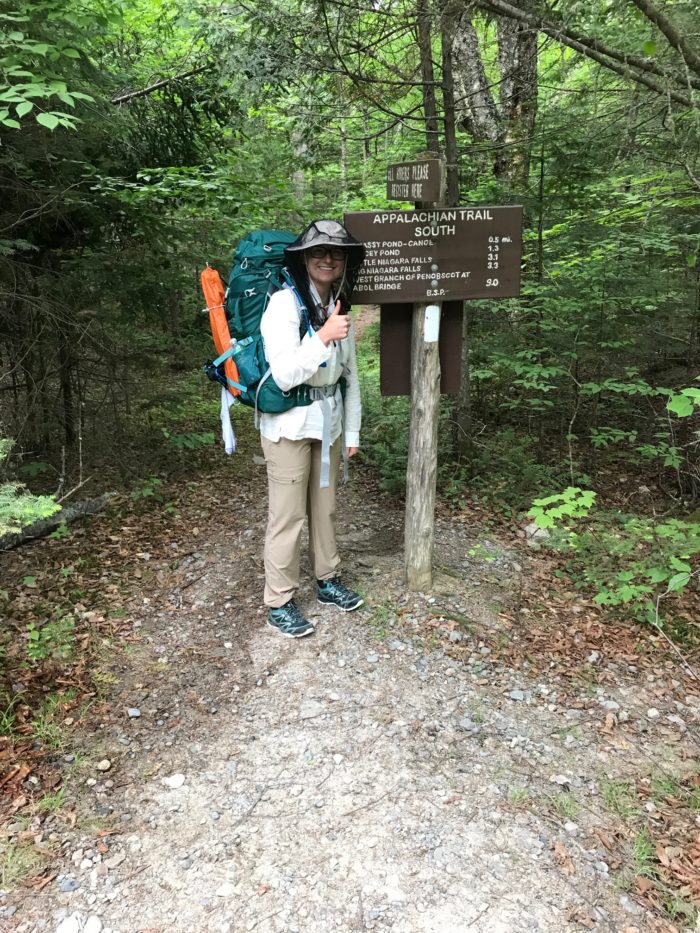 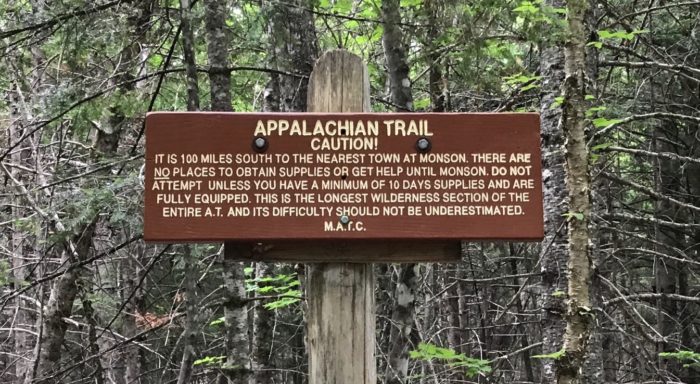 We summited Katahdin on June 8th. After good night rest, at 8am we headed out toward the 100 mile wilderness. Actually from KSC (Katahdin Stream Campground) you hike another 10 miles to Abol and eventually the 100 mile wilderness. This wilderness teaches quickly that Maine’s terrain is gnarly, challenging, and completely unrelenting. It is basically rocks, roots, boulders and downed trees requiring climbing over, under and around while trekking up and down a trail that isn’t all that well marked. Maine clearly received a lot of heavy wet snow and ice storms this past winter as many sections of the trail were more like obstacle courses. One of the hikers summarized the wilderness like being on the stair master with a full pack and having someone trip you every couple of seconds – true! Plus, being this early in the hiking season, crews haven’t had a chance to clear the trail so it is tough going. Also, since resupply isn’t an option, there’s a sense of urgency to make progress quickly while trying to acclimate hiking legs. Speaking of which, mine are decades older than my daughter’s which really puts the pressure on. Pretty daunting, if you ask me. 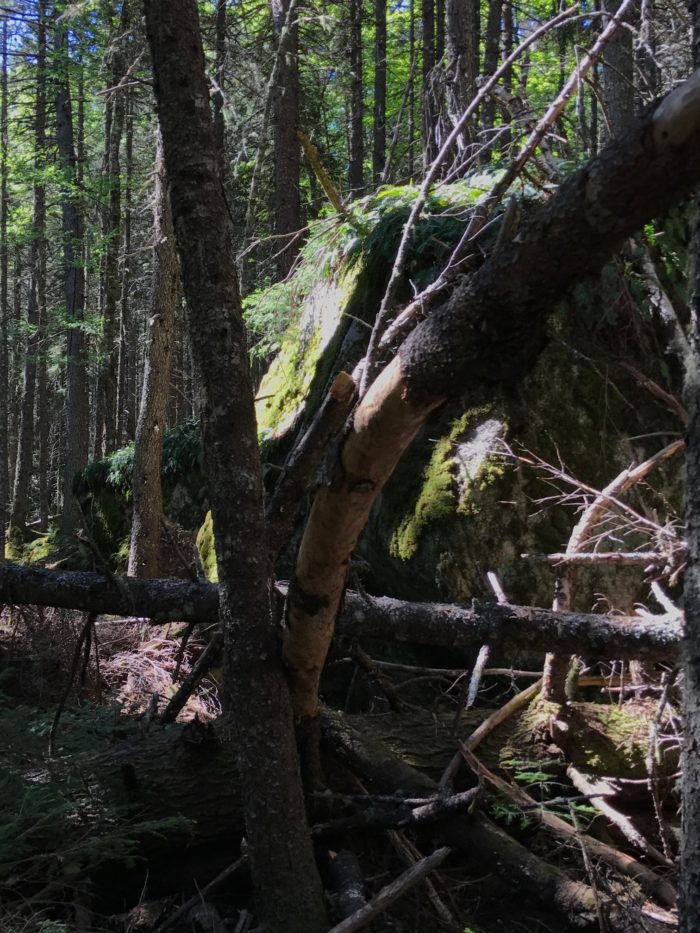 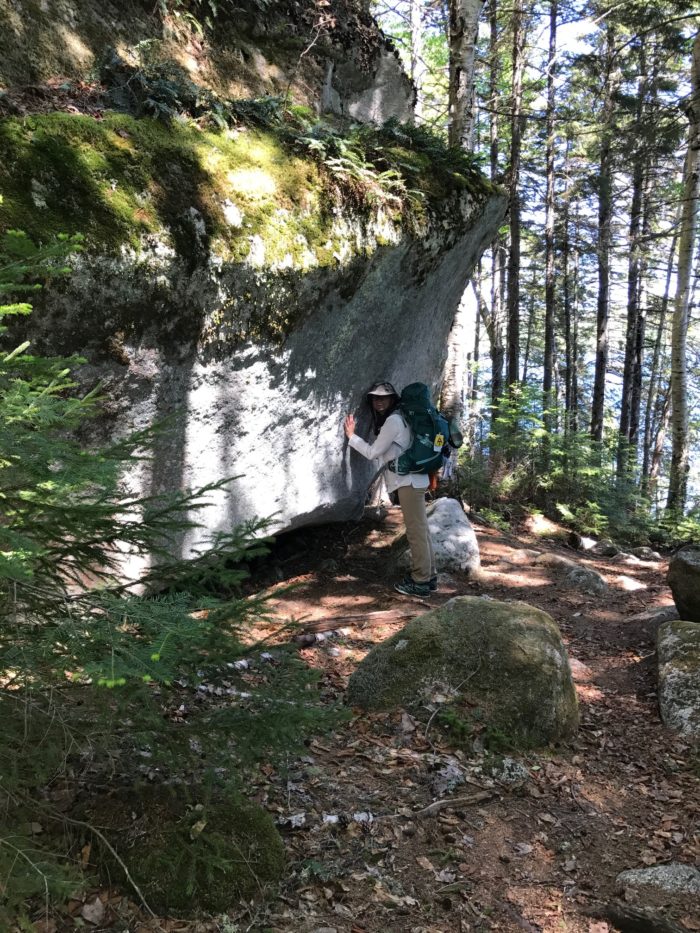 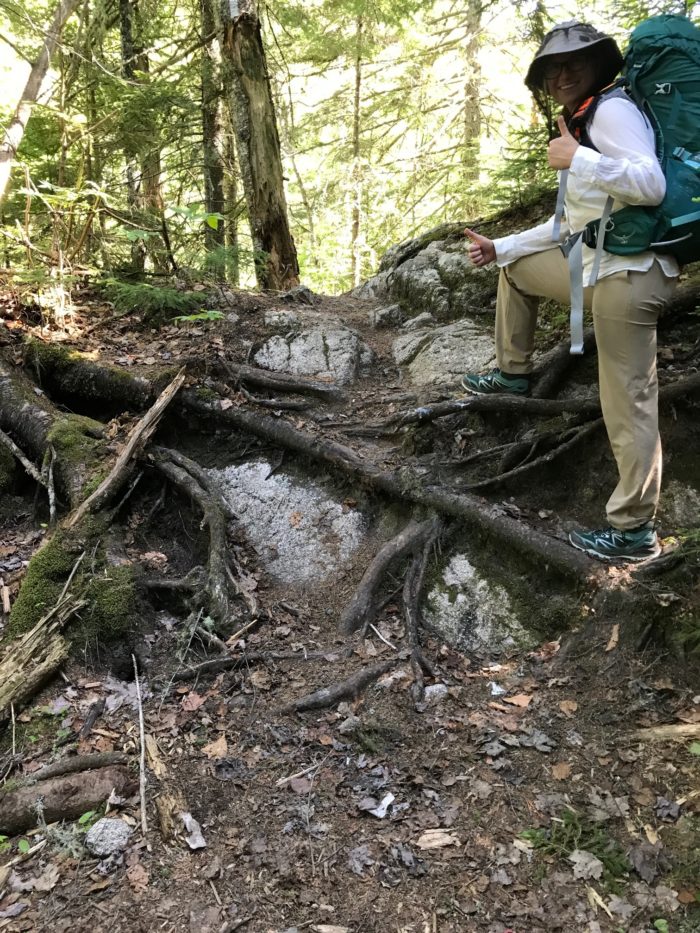 The first day we hiked 13+ miles of varied terrain that for short periods of time were lovely but the majority of the time I concentrated on not falling and keeping up. The temperatures were in the 80s and we sweated bullets while surrounded by swarms of mosquitoes. Mosquitoes are our constant companions biiiiizzzzzzing and biiizzzzzzing incessantly around our nets. We overnighted at the Hurd Brook Lean-to with its baseball bat floor – 3 cheers for having a good inflatable pad! Even though it was hot, to avoid the mosquitoes we all had to sleep zipped in our bags with hats and head nets. It was here that we met up with Ann and Zeb (Mr Whiskers), Kevin (Talisman), Cody (Big Tex) and Daniel (Hawkeye). While the trail names listed came later, this little group became the core of our “tramily” or trail family during the wilderness. I had 3 blisters that were gifts of the Katahdin escapade and I began caring for them in earnest. Every new attempt at protecting them, however, seemed futile since by the end of the day of sweating feet in waterproof boots, the protection wound up anywhere BUT on the blisters. At least they were not looking any worse. Small blessing that I was happy to accept.

Is it the miles, the terrain, or both?! 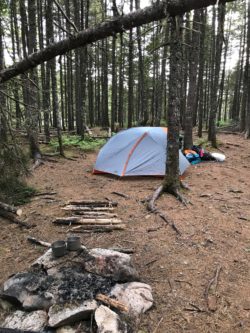 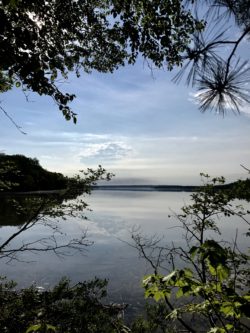 After a not so restful night, the group decamped separately. Alexa and I hiked 15.7 miles and camped solo at Crescent Pond west end … hikers had told us about this off the trail quasi stealth site with pretty nicely cleared areas for tenting and a fire pit. We made camp with plenty of time to set up, eat, and turn in before darkness fell. The third day had us hiking 14 miles to Potaywadjo Spring Lean-to AKA Potato since we couldn’t get the name right. We met up with several of the tramily as well as other SOBO hikers. Again, feet were an issue but still under control and the rest of me felt pretty great. It was more the pace that was causing issues. In order for Alexa’s feet not to create blisters in her waterproof boots and because she is amazingly fit, she needed to hike faster then stop, take off the boots and cool her feet while waiting for me to catch up. For me, the pace was what I needed to safely navigate the rocks and roots but it also meant that once I caught up, she was ready to move on. Clearly, we are going to need an adjustment period before we might be able to actually hike “together”. But, for now, it seems like the only option so we are 2 solo hikers, meeting up every few hours and then again at the end of the day for camp life and rest.

What the Heck is my Problem?!?!

I ran into NOBO hikers who repeated they couldn’t believe how many times they fall every day on the trail in Maine. Funny thing is, I too had wondered the same thing. On one day I was walking with Alexa and the next thing I knew, my right knee crashed into a rock landing fully sprawled. Getting up I was like, “What the …? How did that happen?” Several hours later while I was solo, next thing I know I’m crashing down again only this time point of impact is my cheekbone. Mind you face planting is only part one. Part two comes when your backpack follows suit and double slams you. Like once isn’t enough! By now after rolling over I’m swearing a blue streak and muttering furiously. I know I’ve been paying attention like there’s no tomorrow so what the heck is going on! Looking at my tangled feet I see it. A small branch crossing diagonally through my boots. I had been so focused on the major threats to my wellbeing, namely rocks and roots, that my brain was “selectively seeing” for survival. I completely missed “seeing” the inch wide branches that littered the path. Once that mental adjustment was made, I didn’t fall over another one. I fell over plenty, but no longer over branches. Funny how the mind can hijack process. Anyway, lesson learned the hard way … you should see the shiner!

The following day we hiked 19.5 miles in record heat, 92 degrees, and when I met up with Alexa up at Little Boardman Mountain, the black clouds, whipping winds, thunder and lightning struck. We headed down as fast as possible being pelted by torrential rains and hearing massive trees cracking and breaking in our vicinity. You never saw happier hikers take shelter in East Branch Lean-to! The storm had brought some relief in the temperatures but it was still muggy and buggy and the terrain as unforgiving as ever. Ever present was the understanding that we had a fixed amount of food and that exiting the wilderness on schedule was the priority.

The fun part: Dipping in Brooks and Camp Life 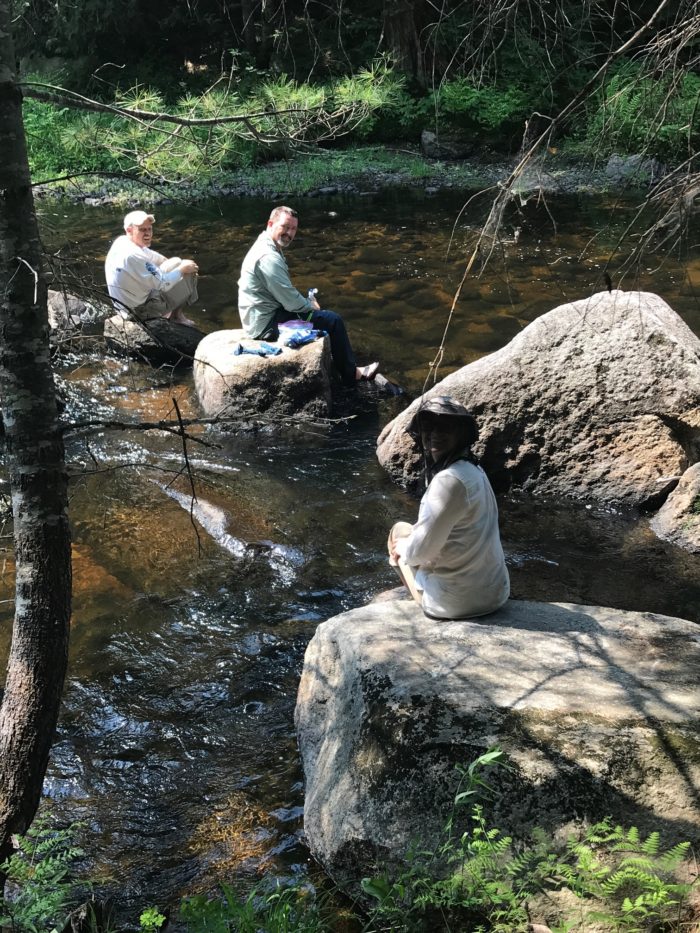 By day 5 of hiking in the wilderness, I couldn’t stand being downwind of myself. A few miles after hiking out I found many of the group taking refuge in the Logan Brook in front of the lean to. This is a wide brook with ledges in the water as if made to invite weary hikers to sit in, fully clothed, and chill. Desperate to cool down and perhaps rinse salts out of my clothing I hopped in. What a MISTAKE! So now I am cooled down and the wet clothing absolutely helped bring down my body temperature. BUT or should I say BUTT!!! After not having truly bathed for now the 6th day, and now hiking in wet undies … yeah … EW! 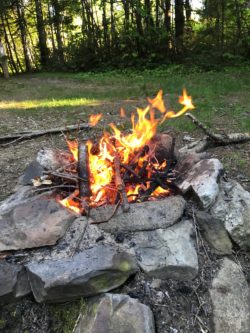 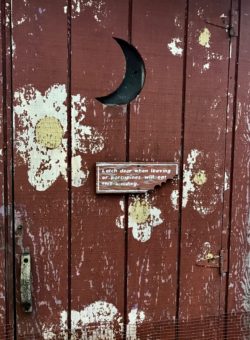 Miles later, we reached Sidney Tappan Campsite, and there was no way I could go on another 2 miles to the next Lean to. By now we had 78 miles under our belts or about 65 miles in the wilderness. As it happens, Hawkeye had made the same decision and we decided to camp together, do LAUNDRY in a tiny spring and enjoy dinner and an awesome fire that helped keep the mosquitoes and bugs away. I’ll take the scent of woodsmoke over bug spray any day! The privy is where the “register” is kept and just the thought of its proximity to poo made me pass on scribbling that I poo was “there”. The sign on the privy is priceless! A sidebar about animals. Other than hybrid squirrels that look like they’re a cross between a chipmunk and squirrel, we haven’t seen ANY! Not a moose but a whole lot of moose poop. Few birds. Nada, bupkis … I am majorly disappointed! Anyway, it was great fun getting to spend time with Alexa and Hawkeye. The best part of tenting is the lack of bugs and being able to have as much or as little clothing on. We fell asleep with temperature in the high 70s and with clothes hanging off branches drying in the night breezes. Overnight a cold snap came through and temperatures plummeted to the high 30s.

My conclusions about Maine thus far: gorgeous when viewed from the tops of mountains but when viewed up close and personal … shnasty, gnarly, root bound and awash with rocks and boulders and downed trees and in need of more blazes and a whole lot of clearing of downed trees. MATC you have your work cut out for you. As a hiker I totally appreciate how difficult it must be to try to keep up with Mother Nature in such an incredibly challenging environment. Thank you for all you do!

SHOUT OUT TO OUR SPONSORS: 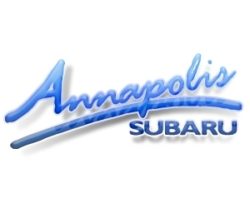 Hi! I’m Kate aka "Ribs". June 8th, Alexa aka "Tink", new grad from “The U”, and I will start our 2,190.3 mile E.P.I.C. SOBO thru-hike and blog up, down and around the trail. We are stoked! As if the AT isn’t hard enough, Alexa’s vegan so our 22 resupply food boxes have been a ginormous challenge! We’ve lined up amazing Trail Angels (Sara VT, Deb NY, Linda & Ed PA, Joyce MD and Nancy NC) who want to bless us with TLC as we wend, stumble, slip, slide and fumble (with style & grace) our way from Maine to Georgia. Alexa is passionate about nonprofits and so created: “Hiking for Nonprofits” where FOR profit companies sponsor our hike with 100% of the $$$$ going directly to nonprofits organizations. Annapolis Subaru stepped up immediately and pledged funds for the Chesapeake Bay Foundation (CBF) as did Belair Produce who are sponsoring on behalf of Heroes of Tomorrow (HoT) and Maryland Federation of Art (MFA). Please visit their websites and support them all. When all is said and done we will see if we are “Stillwell”. Wanna read more stuff? Check out my blog: www.JustSkedaddle.wordpress.com/ Instagram: @Just_Skedaddle and @hikingfornonprofits WEBSITE: www.KateStillwellPhotography.com SPONSORS & SPONSOREES: http://www.annapolissubaru.com, for http://www.cbf.org , http://www.belairproduce.com, for http://mdfedart.com, and http://www.heroesoftomorrow.org