The wilderness is real 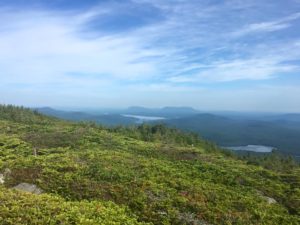 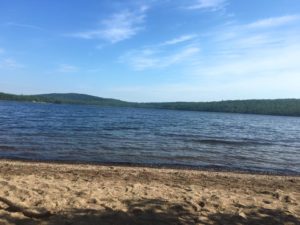 The next morning I left the cute shelter built right next to a swimming hole to continue on my journey through the 100 mile wilderness. I had heard the second part was harder  and there would be some climbing today.  The first few miles went by fast and I ran into my first set of people who told me to check out the beach coming up at Crawford pond.  I saw the side trail and sandy beach.  It wasn’t as pristine as the other beach but I touched the water with my fingers and it was warmer.  I decided to take a dip and swam around for a few minutes before drying off and throwing my cloths back on.  It was good timing because a few minutes later two older gentleman showed up.  I felt fantastic but that was about to change because the terrain was about to get rugged again beginning with a bit of a climb.  I was wearing long pants and long sleeves and the small elevation gain nearly drowned me with sweat and I was ready to break at the top of the hill and at the bottom.  I wanted to get in some more miles and get a head start on white cap.  So, after a long break at a shelter, I headed on with the gnats flying in my face.  I finally passed a few more people later in the day, it seemed this section of the wilderness was less traveled.  I had a big climb at the end of the day which went by slow but when I got to the shelter I was greeted by a few more people.  A few people going north from Harper’s Ferry were there as well as a Maine Appalachian Trail Club crew.  I hung out and the trail club had leftover pasta which became my dinner.  Happy I didn’t have to cook, I crawled in my tent for sleep.
White Cap 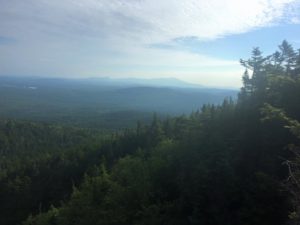 White cap looked like it would be a steep climb but I was fresh and it was cool out.  It was a long way up but the MATC had put steps in (thanks for all your hard work!) so it wasn’t too bad.  It was windy on top and I had my last view of Katahdin (I think I was looking at the right mountain).  I continued down down the mountain with a few more steep ascents and descents.  It was extremely hot and I was going through a lot of water. I stopped for a long lunch at the shelter and then hiked with a slack packing section hiker for a few miles.  When I sat down I realized why I’d been smelling deet all day. The container had leaked over my hip belt and onto my shorts.  My headphones were sticky, the shorts stained, and I was out of bug spray.  Bummed I headed down to the river where I had my first real ford.  I slipped on my crocks and walked through the water which felt excellent after a long days walk. I was feeling pretty exhausted and even though I wanted a head start on the Chairback range (I had heard if was very difficult) I couldn’t walk anymore that day. I camped out with a dude named Gerry and for the first time since my dad had left, I hung a bear bag (I’d been using the mouse hangs in the shelters lately).  Then I tried to get to sleepy early so I would be ready for the mountains I was so nervous about.
The Chairbacks 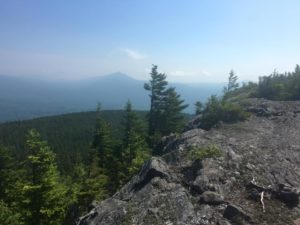 Full of anxiety, I didn’t sleep well.  When I woke and pulled down my bear line, I cursed. There was a new hole in my bag and it looked as if a creature had gotten in. Quickly I unloaded it to see how much damage had been done. I was expecting foul smelling torn up food but found only one zip lock chewed thru and half a bar gnawed on. I tossed the bar thankful that was all that had been stolen.  Now I’m a little scared because I don’t know how to protect my food anymore other than the bad habit of hanging it in shelters.  The squirrels and chipmunks seem to be smarter here, I had heard this had happened to a few others in the wilderness.  Trying to think positive a packed up my supplies and headed up the mountain.  The first climb wasn’t too bad.  It was a lot of elevation but the grade was ok.  There was a break in the climbing and I took a snack break then continued up Chairback which had a section you navigate through a rock slide near the end. It wasn’t as bad as people said it would be, but I imagine it was because I was going up.  At the shelter I ran into my first SOBO in awhile, Owen, who was resting his ankles up.  I stayed a while not wanting to leave and climb more mountains but eventually got the strength.  The next climb wasn’t bad and I hit up a stream for lunch and my last water source until camp that night.  There was a group of 6 NOBOs there and they seemed to have formed a large trail family.  They left and I saw about 6 more people within half an hour and then no one.  Third mountain seemed to be full of rocks I had to climb up and never ending false summits.  I had to butt slide down a few on my way down.  I never knew when I got to the top of three and a half mountain.  Then I was climbing up fourth mountain and it was up huge jagged rocks with a few roots for hand holds here and there.  I never imagined the Appalachain Trail would be more like mountain climbing than hiking but I was learning how wrong I was.  With a pack on it proved even more difficult and I slid and fell a few times.  The clouds seemed to be swooping in as I reached the top and when I got down to the bog I didn’t want to hike anymore.  I had found a stealth spot with a very sketchy water source but when I called my dad he told me to push on and with that motivation I headed up.  The last climb wasn’t too bad and I made really good time to cloud pond shelter.  I saw a tent set up on my way in but no one else was in the shelter.  I set up inside to stay dry and then walked to the pond to get water while my dinner was re-hydrating.  There was a ghostly fog over the lake and when I got back it started to rain.  It was kind of cool as it was my first time alone in a shelter and I was so thankful to be dry and out of the rain that night. 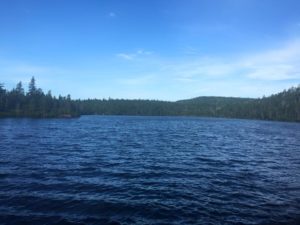 The next morning I woke up to a weird howling noise.  It might of been silly but I thought maybe it was a moose or coyote, but found out it was the dog of the folks who’d stayed in the tent. I began to hike and within a few miles I got a great view of a huge lake below.  The downhill hurt a lot to and I decided to take an easy day and not do too many miles.  It was hot and I took many breaks before I got to the shelter.  There was only one other guy there but soon two section hikers showed and then Owen and a girl named Silvia.  We all packed in together in the small shelter and went to sleep early excited for Monson the next day. 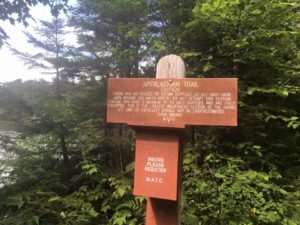 It was only 10 miles to Monson and I caught up to Silvia and Owen at the first ford and then at the next stream.  I convinced Silvia to go swimming with me at this really neat waterfall that we had to climb down to get to the pool.  I followed her down the sketchy rocks since she’d been there before but the water was warm and the falls were a free back massage.  It was totally worth it.  Then I hiked with the two for awhile.  They were fast on the uphills but it was nice walking with others for the day.  We stopped for lunch at a pond which was just in time because I had run out of water.  There were only a few more miles left and I stopped at one last pond before getting to the end of the 100 mile wilderness. When I got to road it took a few tries but I got a hitch into Monson from a lady in a red pickup truck.  I got a bed, showered, then headed to town with my new friends to grab a bite to eat at the Lakeshore.  There was a festival going on in town and some contra dancing happening at eight.  Silvia and another girl at the hostel were going so I decided to join.  They had a live band, nice people, and we had a lot of laughs while dancing.  When we got back to Shaws Hiker Hostel it was way past hiker midnight, soI climbed in my real bed for the night excited about my zero the next day!